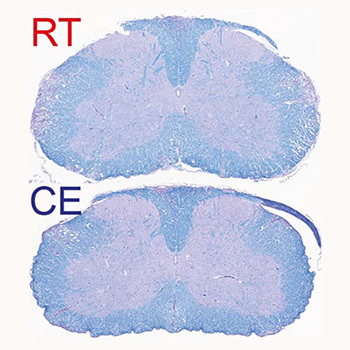 Demyelinated spinal cord of mice suffering from autoimmune disease. Top, at room temperature, and bottom, exposed to cold. Myelin is coloured in blue. The purple staining within the white matter (parts towards the edge of th...

In evolutionary biology, the “Life History Theory”, first proposed in the 1950s, postulates that when the environment is favorable, the resources used by any organism are devoted to growth and reproduction. Conversely, in a hostile environment, resources are transferred to so-called maintenance programs, such as energy conservation and defense against external attacks. Scientists at the University of Geneva (UNIGE) developed this idea to a specific field of medicine: the erroneous activation of the immune system that causes autoimmune diseases. By studying mice suffering from a model of multiple sclerosis, the research team succeeded in deciphering how exposure to cold pushed the organism to divert its resources from the immune system towards maintaining body heat. Indeed, during cold, the immune system decreased its harmful activity which considerably attenuated the course of the autoimmune disease. These results, highlighted on the cover of the journal Cell Metabolism, pave the way for a fundamental biological concept on the allocation of energy resources.

Autoimmune diseases occur when the immune system attacks the body's own organs. Type 1 diabetes, for example, is caused by the erroneous destruction of insulin-producing pancreatic cells. Multiple sclerosis is the most common autoimmune disease of the central nervous system (consisting of the brain and spinal cord). The disease is characterized by the destruction of the myelin, which is a protective insulation of nerve cells and is important for the correct and fast transmission of electrical signals. Its destruction thus leads to neurological disability, including paralysis.

“The defense mechanisms of our body against the hostile environment are energetically expensive and can be constrained by trade-offs when several of those are activated. The organism may therefore have to prioritize resource allocation into different defense programs depending on their survival values”, explains Mirko Trajkovski, professor in the Department of Cellular Physiology and Metabolism and the Diabetes Centre at the Faculty of Medicine of the UNIGE, and lead author of the study. “We hypothesized that this can be of particular interest for autoimmunity, where introducing an additional energy-costly program may result in milder immune response and disease outcome. In other words, could we divert the energy expended by the body when the immune system goes awry?”

A drastic reduction in symptoms

To test their hypothesis, the scientists placed mice suffering from experimental autoimmune encephalomyelitis, a model of human multiple sclerosis, in a relatively colder living environment — about 10°C — following an acclimatization period of gradually decreasing the environmental temperature. “After a few days, we observed a clear improvement in the clinical severity of the disease as well as in the extent of demyelination observed in the central nervous system”, explains Doron Merkler, professor at the Department of Pathology and Immunology and the Centre for Inflammation Research at the UNIGE Faculty of Medicine and co-corresponding author of the work. “The animals did not have any difficulty in maintaining their body temperature at a normal level, but, singularly, the symptoms of locomotor impairments dramatically decreased, from not being able to walk on their hind paws to only a slight paralysis of the tail.”

The immune response is based, among other things, on the ability of so-called antigen-presenting monocytes to instruct T cells how to recognize the “non-self” elements that must be fought. In autoimmune diseases, however, the antigens of the “self” are confused with those of the “non-self”. “We show that cold modulates the activity of inflammatory monocytes by decreasing their antigen-presenting capacity, which rendered the T cells, a cell type with critical role in autoimmunity, less activated”, explains Mirko Trajkovski. By forcing the body to increase its metabolism to maintain body heat, cold takes resources away from the immune system. This leads to a decrease in harmful immune cells and therefore improves the symptoms of the disease.

“While the concept of prioritizing the thermogenic over the immune response is evidently protective against autoimmunity, it is worth noting that cold exposure increases susceptibility to certain infections. Thus, our work could be relevant not only for neuroinflammation but also other immune-mediated or infectious diseases, which warrants further investigation”, adds Mirko Trajkovski.

Autoimmune diseases on the rise

The improvement in living conditions in Western countries, which has been noticeable over the past decades, has gone hand in hand with an increase in cases of autoimmune diseases. “While this increase is undoubtedly multifactorial, the fact that we have an abundance of energy resources at our disposal may play an important but as yet poorly understood role in autoimmune disease development”, concludes Doron Merkler.

The researchers will now pursue their research to better understand whether their discovery could be developed in clinical applications.