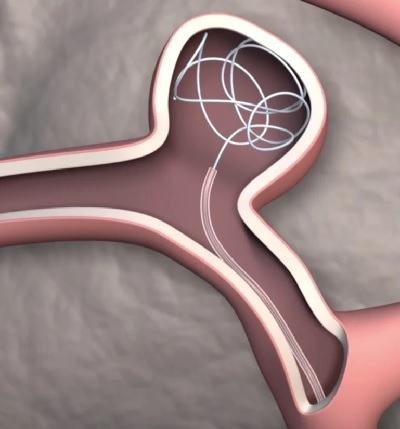 A steerable catheter allows surgeons to deliver therapies, in this case platinum coils that block blood flow to an aneurysm, in the deepest recess of the brain. Credit: UCSD

A team of engineers and physicians has developed a steerable catheter that for the first time will give neurosurgeons the ability to steer the device in any direction they want while navigating the brain’s arteries and blood vessels. The device was inspired by nature, specifically insect legs and flagella--tail-like structures that allow microscopic organisms such as bacteria to swim.

The team from the University of California San Diego describes the breakthrough in the Aug. 18 issue of Science Robotics.

The steerable catheter was successfully tested in pigs at the Center for the Future of Surgery at UC San Diego.

Approximately one in 50 people in the United States has an unruptured intracranial aneurysm--a thin-walled, blister-like lesion on a cerebral artery that is prone to rupture. These kinds of lesions affect over 160 million people worldwide, half of them under the age of 50. Of patients that suffer ruptured aneurysms, more than half die. Half of the survivors experience long-term disabilities. Studies show that a quarter of cases cannot be operated on because of how difficult the aneurysms are to reach.

“As a neurosurgeon, one of the challenges that we have is directing catheters to the delicate, deep recesses of the brain,” said Dr. Alexander Khalessi, chair of the Department of Neurological Surgery at UC San Diego Health. “Today’s results demonstrate proof of concept for a soft, easily steerable catheter that would significantly improve our ability to treat brain aneurysms and many other neurological conditions, and I look forward to advancing this innovation toward patient care.”

The current state of the art in aneurysm surgery involves neurosurgeons inserting guidewires into an artery near the groin to take catheters through the aorta and all the way up into the brain. Surgeons use curved-tip guidewires to navigate the brain's arteries and junctions. But these guidewires have to be removed before the catheter’s tip can be used to provide treatment.

“Once the guidewire is retrieved the catheter will return to its native shape, often straight, resulting in loss of access to the pathology,” said Dr. Jessica Wen, who was instrumental in serving as a bridge between clinicians and engineers, and coordinated work with the Center for the Future of Surgery at UC San Diego.

As a result, it is extremely difficult to place and keep it in the right position to release platinum coils that block blood flow to the aneurysm and prevent a brain bleed.

Steerable catheters are not available for neurosurgery because of how small the brain's blood vessels are. Specifically, devices need to be less than one millimeter in diameter--that’s roughly the diameter of a few human hairs--and about five feet long (160 cm). Industrial fabrication methods struggle at this scale. That’s partially because gravity, electrostatics, and the van der Waals force are all similar at this size. So once you pick something up with tweezers, you cannot drop it. If you coax it from the tweezers, it may leap into the air from opposing forces and disappear, never to be found again.

“Unfortunately, many of the most important blood vessels we need to treat are among the most tortuous and fragile in the body,” said James Friend, a professor at the UC San Diego Jacobs School of Engineering and School of Medicine and the paper’s corresponding author. “Although robotics is rising to the need in addressing many medical problems, deformable devices at the scales required for these kinds of surgeries simply do not exist.”

To solve this problem, researchers turned to inspiration both from nature and from soft robotics.

“We were inspired by flagella and insect legs, as well as beetles mating, where microscale hydraulics and large aspect deformation are involved,” said Gopesh Tilvawala, who recently earned a Ph.D. in Friend’s research group and the paper’s first author. “This led us to developing [a] hydraulically actuated soft robotic microcatheter.”

The team had to invent a whole new way of casting silicone in three dimensions that would work at those scales, by depositing concentric layers of silicone on top of one another with different stiffnesses. The result is a silicone rubber catheter with four holes inside its walls, each about one half the diameter of a human hair.

The team also conducted computer simulations to determine the configuration of the catheter; how many holes it should include; where these should be placed; and the amount of hydraulic pressure needed to actuate it. To guide the catheter, the surgeon compresses a handheld controller to pass saline fluid into the tip to steer it. Saline is used to protect the patient:; if the device should fail, then saline harmlessly enters the bloodstream. The catheter’s steerable tip is visible on x-rays.

A new way of doing neurosurgery

“This technology is ideal for situations when I need to make a 180 degree turn from the catheter position in the parent artery, and maintaining position and reducing kick-out is critical,” said Dr. David Santiago-Dieppa, neurosurgeon at UC San Diego Health. “This advance may ultimately allow us to treat aneurysms, other brain pathologies and even strokes that we haven’t been able to in the past.”

The work is poised to make a significant difference in the way aneurysm surgery is conducted, physicians said.

“This type of precision can be realized with steerable tools and the successful deployment of these tools should move us forward in permitting improved access, decreased procedural time, better capacity utilization, decreased radiation exposure and other related and expected benefits,” said Dr. Alexander Norbash, chair of the Department of Radiology at UC San Diego Health.

The next steps include a statistically significant number of animal trials and first in human trial.