Colloid cysts are benign intraventricular lesions that may present with a variety of neurologic symptoms, most commonly headache from obstructive hydrocephalus. The author discusses the clinical presentation, diagnosis, and management of colloid cysts. In particular, data regarding management of asymptomatic colloid cysts as well as comparison of the risks and benefits of different surgical techniques are discussed.

Colloid cysts are benign intraventricular lesions, usually arising in the third ventricle and consisting of collagenous capsule with a thick gelatinous, viscous material inside (01). In 1858, Wallman described the first case of a colloid cyst presenting with urinary incontinence and ataxia (56). Dandy first successfully removed a colloid cyst in 1921 using an approach through the posterior right lateral ventricle. An early operative mortality of 20% was discouraging. Subsequently, transcallosal, transventricular, transcallosal interfornicial, transventricular subchoroidal, and stereotaxic approaches have all been successfully used to remove these lesions (15; 24; 09; 49; 04; 06; 29). Further, the adoption of microsurgical techniques has reduced operative mortality to near zero (09).

Patients with colloid cysts most commonly present with 1 of 3 symptom complexes: (1) headache, papilledema, and occasionally false localizing focal, motor, and sensory signs; (2) progressive or fluctuating dementia with or without headache and raised intracranial pressure; or (3) paroxysmal severe headaches, nausea, vomiting, stupor, or coma without symptomatology between episodes (24; 57; 32; 04; 58). Individually, headaches are by far the most common symptom (89%), followed by nausea/vomiting (23%), visual decline (22%), dizziness/ataxia (20%), and cognitive decline (14%) (07). Unlike other brain tumors, headache associated with colloid cyst may resolve or reduce in the supine position (50). Asymptomatic/incidental cysts are most often seen following trauma (07). Untreated colloid cysts can cause acute disturbances of consciousness, coma, and death because of ventricular outflow obstruction with resultant obstructive hydrocephalus (24; 32; 47; 12; 45). Subarachnoid hemorrhage can be seen in association with colloid cyst (02). Some patients with colloid cyst may present following head trauma with massive hydrocephalus, requiring emergent shunt placement (14). Colloid cysts can present with some intraocular findings other than papilledema. One patient presented with visual field deficits and findings suggestive of glaucoma (42). Another patient with a colloid cyst had intraocular hemorrhage (08).

Episodic positional headaches suggest that the colloid cyst moves in and out of the foramen of Monro on its pedicle with intermittent obstruction of cerebrospinal fluid. Most headaches, however, are not positional in nature (11). Depression, anxiety attacks, paranoid ideation, memory difficulties, and decreased cognition are observed occasionally and are often subtle. These symptoms may reflect altered function of adjacent hypothalamic and limbic structures. Sometimes surgical cyst removal, even in the absence of hydrocephalus, can ameliorate these symptoms (33).

Colloid cysts can produce chronically elevated intracranial pressure, which, if left unattended, may eventually lead to serious complications such as visual loss and memory difficulties. Sudden interruption of cerebrospinal fluid circulation through ventricular outflow obstruction may also occur, possibly resulting in coma and even sudden death (15; 37; 32; 11). In one series that collected patients between 1984 and 1995, almost 15% of patients were admitted in a comatose state, and 5% died suddenly (36). The overwhelming majority of patients with rapid deterioration (96%) have cyst diameter greater than 1 cm, and adults are more likely to present to care with less than 24 hours of symptoms (28). However, although acute neurologic deterioration has been emphasized, most patients present with long-standing, intractable symptoms that allow for diagnosis and elective surgery. Asymptomatic, incidentally discovered colloid cysts rarely cause acute hydrocephalus or sudden neurologic deterioration in the absence of trauma (07). High risk factors predicting need for prompt treatment (vs. observation) include diameter greater than 7 mm, older age, FLAIR hyperintensity within lesion, presence of headaches, and location within anterior or posterior regions of the third ventricle.

The patient was a 36-year-old, right-handed, Caucasian woman who had an abrupt onset of severe headache while bending forward during intense household work. The headache prevented her from activities, and while walking to her bed to lie down, she collapsed to the floor. She was taken to the emergency room for evaluation. On examination, she was found to be stuporous with intact brainstem reflexes. An urgent CT scan of the brain was performed that demonstrated a hyperdense cystic lesion of the third ventricle with obstructive hydrocephalus. The clinical and neuroimaging findings were felt to be compatible with colloid cyst of the third ventricle. She underwent emergent ventriculostomy for acute hydrocephalus. Subsequently, she was taken to the operating room for more definitive therapy consisting of endoscopic evacuation of cyst contents and microsurgical resection of cyst capsule. Thick tenacious material was aspirated from the cyst. Postoperative recovery was gradual but complete, with no discernible neurologic deficits. She was able to return to her usual activities, and followup scan of her brain did not demonstrate any residual lesion or hydrocephalus.

The etiology of colloid cysts is not known. No chromosomal abnormalities have been reported in patients with colloid cysts. However, reports of familial colloid cysts have appeared in literature (54; 51; 39; 03; 46).

Colloid cysts are smooth, spherical masses that arise in the anterior and dorsal regions of the roof of the third ventricle. The wall is a thin membrane enclosing a soft gray proteinaceous material or a dense hyaline substance. 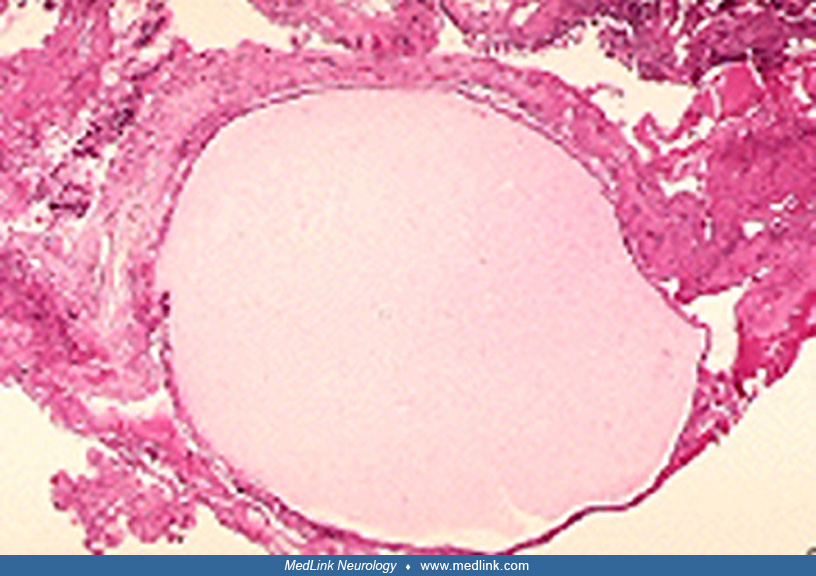 The state of the cyst contents varies with the degree of hydration, from thick fluid to a solid gel, and this variation in turn affects the appearance on neuroimaging studies. The wall is composed of fibrous connective tissue lined by benign columnar ciliated epithelial cells (18). Although generally regarded as a malformation, the lineage of colloid cysts remains controversial. A neuroectodermal derivation for colloid cysts has been assumed based on structural and embryological considerations as well as their intraventricular location. Potential precursors include choroid plexus, ependyma, primitive neuroectoderm, and the paraphysis. Uncertainty over the specific nature of epithelium lining colloid cysts is reflected in the all-encompassing synonym "neuroepithelial cyst" that is often applied (26). Two immunohistochemical studies using histologic antigens and monoclonal antibodies indicated that colloid cyst epithelium is immunohistochemically different from that of normal or neoplastic choroid plexus. In 1, the immunophenotype of colloid cysts was similar to foregut-derived epithelia of enteric and Rathke pouch cysts, supporting endodermal origin for these cysts (27). This observation was further supported by studies on the nature of the cyst contents themselves. These studies indicate that the carbohydrate epitopes exhibited by cysts and their contents are also consistent with an endodermal origin (55).

Colloid cysts of the third ventricle represent approximately 0.5% to 1% of primary intracranial mass lesions (03; 16). There is no sexual predominance. Colloid cysts usually remain asymptomatic until 20 to 50 years of age; they are rarely diagnosed during childhood, although one study documented 6 such cases and emphasized that despite their rarity, these lesions must be considered in the differential diagnosis of acute or subacute neurologic deterioration in children (34).

There are no preventive measures that decrease the occurrence of colloid cysts.

The differential diagnosis includes any third ventricular mass, including choroid plexus papillomas, glial tumors, metastases, craniopharyngioma, granuloma, hematomas, basilar artery aneurysms and, rarely, suprasellar pituitary adenomas. Metastatic lesion to choroid plexus may resemble colloid cyst, especially solitary lesion without other intracranial metastases. There appears to be an increased tendency for renal cell carcinomas to metastasize to the choroid plexus (30). The spherical shape of the tumor and its characteristic intraventricular location at the foramen of Monro, however, strongly suggest the diagnosis. Colloid cysts can often be definitively diagnosed based on clinical and radiographic studies (18; 43).

The diagnosis of colloid cysts can be made definitively with CT or MRI in most cases. On CT scanning, colloid cysts appear as a distinctive isodense or hyperdense lesion at the foramen of Monro; variable contrast enhancement is noted (18; 10). 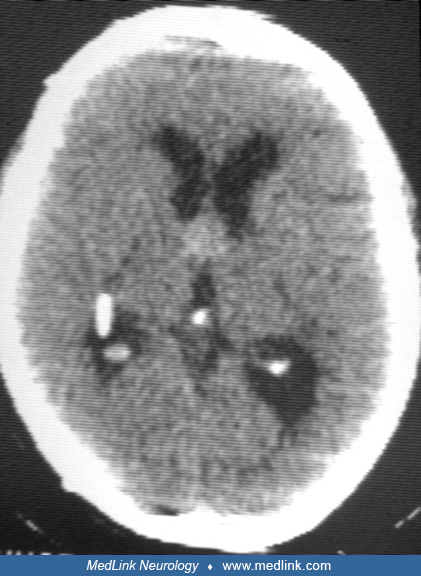 Colloid cyst (CT)
The hyperdense mass protrudes into the foramina of Munro. A shunt tube is seen in the right occipital horn. (Contributed by Dr. Sherman Stein.)

A distinctive MR appearance with high signal intensities noted on both T1- and T2-weighted images reflects the high protein content of the viscous cyst material (25). 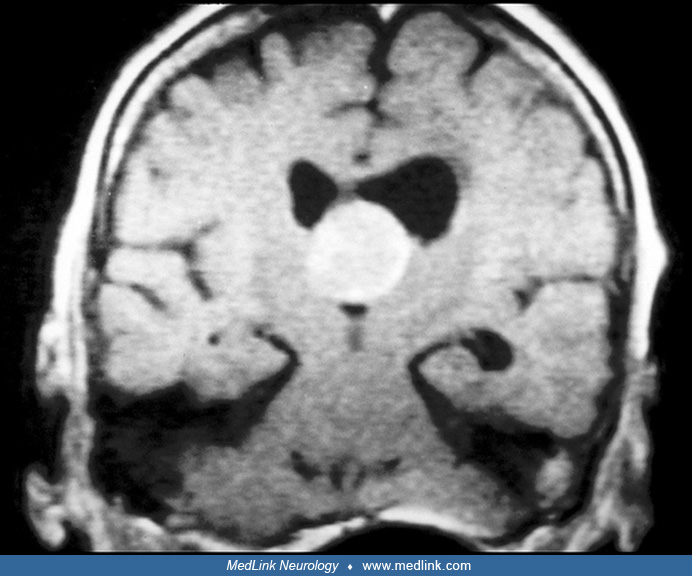 In cases where some of the cyst contents are solid, there is a variable radiographic appearance. 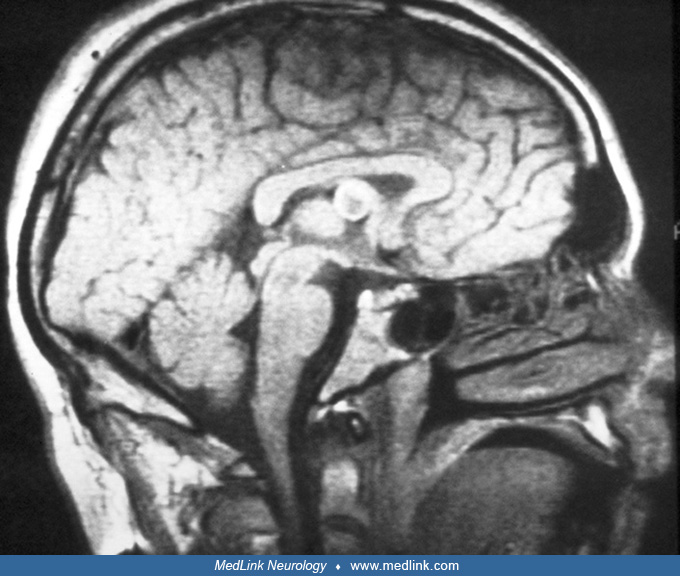 Colloid cyst (MRI) (2)
This midsagittal, unenhanced, T1-weighted MRI shows a small colloid cyst in the superior third ventricle. Signal intensity is increased in the periphery of the cyst and decreased in the center. (Contributed by Dr. Sherman Stein.)

Solid areas appear on CT scans as markedly increased density, and signal intensity is increased on T1- and T2-weighted MRIs (53). Because some colloid cysts are isointense to brain on MRI and do not enhance, they may be more easily appreciated with CT (35).

Colloid cysts are curable, yet potentially fatal, and the management is both challenging and controversial (23). The treatment goals for colloid cysts should be relieving cerebrospinal fluid blockage caused by foraminal obstruction and removing the space-occupying lesion. Each case must be considered individually for surgical intervention. The risk of sudden death, albeit low, argues for surgical treatment in all patients with symptoms, particularly hydrocephalus. However, close observation with serial neuroimaging studies may be a safe management strategy in some patients with incidentally discovered colloid cysts, in particular those that are low risk (no evidence of hydrocephalus, less than 7 mm diameter, young patient, location in mid-portion of third ventricle) (43; 07). Present management options for colloid cysts include management of hydrocephalus and resection of the intraventricular mass. For patients presenting with symptomatic ventriculomegaly, placement of an emergent external ventricular drain may be required in the acute setting prior to cyst resection. Hydrocephalus persisting after surgical resection of cysts is typically treated with a ventriculoperitoneal shunt. Resection of intraventricular colloid cysts is most commonly performed via microsurgical (transcortical-transventricular or interhemispheric-transventricular) or endoscopic approaches with very low mortality rates (0.6% to 1.4%) (16; 41; 13). Data suggest that microsurgical approaches afford a higher rate of complete removal (97% vs. 58%) and lower recurrent rate (0.38% vs. 3%) relative to endoscopic treatment (48). Conversely, endoscopic methods have a generally lower morbidity profile compared to microsurgery approaches, most notably decreased rate of seizures (15% in microsurgery vs. 5% in endoscopic) and lower readmission rates (48; 13). In addition, operative time and length of hospital stay are both significantly reduced with endoscopic resection (20). Conversion from endoscopic to microsurgical resection has also been reported (41). One study demonstrated that microsurgical resection of colloid cysts led to a sustained improvement in neurocognitive function, presumably due to reduction of hydrocephalus and/or reduction of mass effect on the fornix (44). Morbidity and mortality include intraoperative bleeding, postoperative hydrocephalus, cerebrospinal fluid leak, subdural hematoma, cognitive deficits, seizures, and transient and permanent memory disturbances (49; 22; 04; 52; 40; 45; 17; 05; 11; 23). The amnestic syndrome is caused by bilateral fornix damage; sparing of the left fornix alone is sufficient to ensure a more favorable outcome (38). Clinical and radiological follow up are necessary to assess and assure lesion-free survival (31; 19; 21).