Introduction
Brachial neuritis is a syndrome of uncertain cause that presents as a severe, aching pain around the shoulder. As the pain resolves there is usually variable weakness and wasting of muscles around the shoulder or the arm. Brachial neuritis is relatively rare. Synonyms for this syndrome include bracial plexus neuritis, idiopathic brachial plexus neuropathy, Parsonage Turner Syndrome, and neuralgic amyotrophy.

Anatomy
There are three major nerves in the arm: the radial, the median, and the ulnar nerve. Although this sounds straightforward, anatomically it is complex. There are eight nerve 'roots' on each side of the neck (the cervical spine) that leave the spinal cord and pass out into the soft tissues of the neck. These eight roots then join up and form a very complex system of 'divisions' and 'cords.' Below is an illustration of the brachial plexus on one side of the neck. There is a similar structure on the other side. 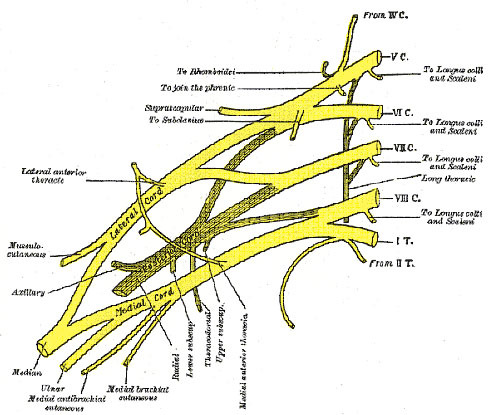 The diagram above demonstrates the complexity of the brachial plexus.

To illustrate where exactly this 'plexus' lies in the body, the diagram below illustrations the plexus as it passes between the muscles of the neck and behind the clavicle. In the diagram, the clavicle has been cut away so that one can appreciate the location and the interweaving of the nerves. 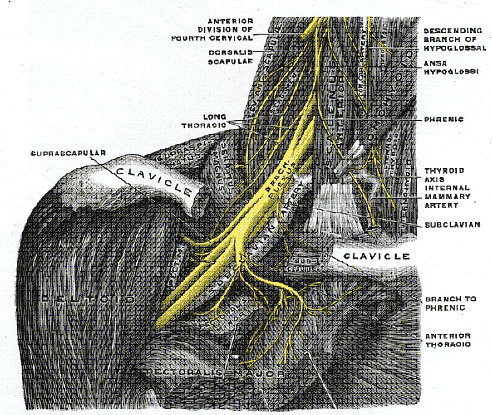 In brachial neuritis, any combination of individual nerves, or divisions, or cords become inflamed and lead to the clinical picture. Typically, the patient suddenly develops a severe, throbbing, aching pain around the shoulder. It is often felt deep behind the shoulder blade and is so constant and nagging that the patient has great difficulty finding a comfortable position in bed at night and either can't fall asleep or has disrupted sleep. During the day there is some relief only by using the good arm to hold the painful arm flexed and resting across the chest.

After days or even weeks, the pain slowly subsides and when able to move the arm without pain, the patient discovers that the arm is weak and often that some of the muscles around the shoulder or upper arm have become withered (wasted). The wasting and weakness may last for months or even a year or longer. In a small proportion of patients, there is never recovery of full strength. In general, sensation is relatively preserved.

Clinical aspects
Brachial neuritis is slightly more common in males than females, and although it presents at any age, most attacks begin between the ages of 20 to 50 years. Most cases occur for no apparent reason. However, occasionally brachial neuritis is provoked after trauma to the neck or shoulder, especially a stretching mechanism to the arm or even after a surgical procedure, not necessarily even near the shoulder. Other factors include vaccination, which is typically injected into the upper arm (into the deltoid muscle), a febrile or viral illness, and finally, in a few cases there is a family history, consistent with a genetic component. In the vast majority of cases there is no family history, no obvious preceding provocation, and it appears only in the one shoulder and arm. It is extremely rare to appear in both arms at the same time.

Although the pain is invariably in and around the shoulder, neck, and upper arm, the subsequent muscle wasting and weakness is variable and can involve only one muscle (for example the serratus anterior, which produces a very characteristic 'winging of the scapula') or a group of muscles. This simply reflects which nerves, or parts of the plexus, are inflamed.

Etiology
The cause is unknown. There are more questions than answers for doctors and research scientists. Why do a small proportion of people who stretch the nerves, or have an infection, or a vaccination, or surgery react this way? It must be emphasized that in most patients there is no preceding history. Secondly, why is it that the inflammation seems to pick out only one nerve or one part of the plexus and spare the rest of it?

There is evidence accumulating that the problem is in the body's immune system and that the myelin insulation around the nerves and plexus, especially, may become inflamed and eventually scarred.

In the rare familial form, it is probable that there is a genetic 'sensitivity' of the normal myelin and that this combined with some external factor induces the inflammation, producing the pain and eventual weakness.

Because there is no specific or sensitive test for brachial neuritis, the diagnosis is based on the suggestive story of the severe shoulder pain, which resolves and leaves the patient with residual weakness. Your doctor will perform tests to exclude other explanations, such as an MRI scan of the neck and plexus structures, a needle test of the muscles supplied by the nerves, and a lumbar puncture to examine the fluid that surrounds the nerve roots in the cervical (upper) spine. Sometimes this may indicate a degree of inflammation when there are antibody proteins detected in the cerebrospinal fluid.

Prognosis
In general, the outlook for brachial neuritis is optimistic, but the road to recovery is slow. The pain mostly resolves within weeks, but the rare patient may have persistent pain for months. It is the wasting and weakness that may take months or even years to recover. A good rule of thumb is that about one third of patients recover in a year, two thirds in two years, and the rest within four years. A nerve, if it is able, will regrow at the rate of human hair. So if the muscles that are wasted and weak are in the forearm or hand then the nerves will have a long way to regrow, thus taking more time.

Management
No treatments have been shown to reliably and scientifically produce any long-term benefit, or influence the final outcome of brachial neuritis. Because it is thought that the myelin is inflamed, there has been a tendency to use high doses of strong anti-inflammatory agents (steroids). Although such drugs may reduce the pain component, the muscle weakness and wasting are not influenced. In general, the best advice is to provide symptomatic pain relief and then to let nature take its time to heal the nerves, even though it may take years. Thankfully, the chance if it recurring or appearing in the other shoulder are very unlikely, unless there is a strong family history of the problem; even then it is only about 10% to 15%.