Asymmetric tonic seizures are usually a manifestation of frontal lobe epilepsy, also known as supplementary motor seizures. They are mainly characterized by asymmetric tonic posturing of the extremities with or without head turning. Seizures commonly originate in the supplementary motor area. They are usually brief and nocturnal and may not be associated with loss of consciousness. They can be disabling due to falls. Other regions, such as mesial parietal (precuneus) and posterior cingulate, can also manifest as asymmetric tonic seizures. They can be easily mistaken for nonepileptic events due to a paucity of EEG abnormalities during seizures. Etiologies are multiple and include mass lesions and malformations of cortical development. Seizures unresponsive to antiseizure medications may respond to epilepsy surgery.

Asymmetric tonic seizures are usually defined as having multiple discrete episodes lasting less than 1 minute, usually with a nocturnal predominance. Patients do not typically lose consciousness at the beginning but may lose consciousness later. The seizures occur in clusters (17). Patients exhibit very sudden arm movements or extension, which maybe unilateral or bilateral. If occurring unilaterally, the extended arm is contralateral to the seizure-onset zone. There can be associated forced head turning, more frequently contralateral to the seizure-onset zone. The tonic motor activity is often followed by clonic movements. Tonic arm or leg extension can be bilateral and symmetric. Stepping automatisms of the legs can be associated with the seizure. Patients usually return to baseline very quickly without postictal aphasia, confusion, or changes in their tone (15). However, seizures may go on to be secondarily generalized with more tonic-clonic activity and loss of consciousness. Some patients demonstrate an aura, usually somatosensory in nature, such as numbness, tingling, a pulsing sensation, or heaviness. In many patients, seizures start suddenly and without any preceding signs.

Interestingly, patients with asymmetric tonic seizures have been noted to have less postictal stertorous respirations and briefer postictal generalized suppression of EEG as compared to bilateral symmetric seizures (07).

The seizure type is not known to manifest in any specific age group. Research studies include patients from 2 to 50 years of age. Both sexes appear to be affected equally.

Like other focal epilepsies, 80% of patients respond to medication management. No specific medications are designed for the control of this seizure type, and no documented data show that localization helps influence the probability of the medication response (01).

Intractable forms may require surgical intervention or optimal control of their seizures (see Management section). Asymmetric tonic seizures associated with symptomatic epilepsies, such as Lennox-Gastaut syndrome, have a poor prognosis.

This 20-year-old right-handed female started having seizures at 7 years of age, manifested by tonic posturing of her right arm followed by tonic-clonic activity. Seizures were mainly nocturnal and occurred 1 to 3 times every night. Seizures were intractable to multiple medications. She underwent vagus nerve stimulator placement at 17 years of age--at that time failing medical management with oxcarbazepine, levetiracetam, zonisamide, and clonazepam. At the time of presentation to the level 4 epilepsy center, the patient seemed cognitively slow, was on carbamazepine and valproic acid, and had a normal examination.

Her seizures were recorded with video-EEG and consisted of asymmetric tonic extension of all 4 extremities lasting 20 to 40 seconds with impairment of consciousness.

Her EEG was unremarkable despite major motor activity, and even over the vertex there was minimal reflection of her seizure on EEG. Her MRI was unrevealing and did not show any clear abnormality. Further work-up, including investigation with intracranial EEG electrodes, proved seizure onset in the left supplementary motor area. The patient had a resection of her left supplementary motor area, and her seizures ceased. Pathology revealed cortical dysplasia. Her cognition improved significantly despite no changes in her antiseizure medication, which was most likely due to improved sleep. The patient is now attending college and has remained seizure-free for more than 4 years.

Seizures are thought to be caused by neuronal excitation, which becomes synchronized with changes in the modulatory effect of interneurons (12; 32). From an initial seizure-onset zone, seizures may propagate to various other areas of the brain and lead to clinical symptoms. Subcortical structures may also play a major role in generating tonic and clonic activity, but this needs further investigation. The role of glutamate as a mediator of cellular hyperexcitability is also well established. AMPA receptors have been found to play a predominant role in mediating the degeneration and spread of seizure activities (32).

There are many underlying causes for focal epilepsy and asymmetric tonic seizures. They include, but are not limited to: neoplasm or malignancy, vascular insults, trauma, malformations of cortical development, inflammatory diseases, infections, systemic causes, and inborn errors of metabolism.

There are very few specific epidemiological studies of asymmetric tonic seizures. Sander has described the shortcomings in epilepsy (33). It is generally accepted that in developed countries, the incidence of epilepsy is around 50 per 100, 000 per year. In resource-poor countries, the incidence is likely to be higher. Prevalence of active epilepsy is in the range of 5 to 10 per 1000 in most locations, although it might be higher in some isolates. Age-specific incidence rates have changed, with a decrease in younger age groups and an increase in persons older than 60 years.

Seizure precautions are the same as in any other seizure disorder. The general principles of prevention that are applicable to focal epilepsy are relevant to asymmetric seizures. Prevention strategies are also dependent on the etiology, which commonly includes structural abnormalities.

Because there is a nighttime predominance, parasomnias as well as nocturnal paroxysmal dystonias need to be considered in the differential diagnosis.

Autosomal dominant nocturnal frontal lobe epilepsy is characterized by seizures that occur in clusters. They are brief, usually occur at night, and have predominantly motor manifestations with tonic or hyperkinetic activity. Age of onset is usually within the first or second decade of life. Interictal EEG is usually normal and ictal EEG may show a sharp, strong spike followed by slow-wave discharge predominantly in the frontal regions. Seizures can persist throughout adult life but usually respond well to antiepileptic medications. Several genes coding for alpha 4 nicotinic acetylcholine receptor (nAChr) are responsible for these patients’ epilepsy and affect their memory and attention as well (36).

There is also an association of asymmetric tonic seizures with the spectrum of seizures in patients with symptomatic epilepsies such as Lennox-Gastaut syndrome. Asymmetric tonic seizures can be 1 of the seizure types in addition to generalized tonic-clonic seizures, atypical absences, or drop attacks. This severe form of epilepsy usually begins before 4 years of age, with a variety of seizure types including tonic, atonic, and atypical absence as well as myoclonic activity. There is also an association with impaired intellectual functioning, developmental delay, and behavioral problems.

Initially when characterizing a seizure, a routine 20- to 30-minute scalp electroencephalogram is usually 1 of the first diagnostic tests performed. This test is not very sensitive to this particular type of seizure due to the deep location of the supplementary motor area. There is usually no disturbance in background rhythm, and interictal sharp waves are rare or absent in this patient population (27). An MRI of the brain should be performed to assess for structural lesions as well as subtle lesions, such as cortical dysplasias.

Some patients will require evaluation with video-EEG to establish a final diagnosis and characterize the seizures. Prolonged video-EEG may show interictal abnormalities in the midline. Background rhythm is usually normal. Video-EEG is helpful in characterizing the events based on semiology. Ictal EEG is often obscured by artifact and can be entirely normal. Ictal sharp waves, if present, are seen near the midline (27). It is important to demonstrate that seizures are stereotyped. Nighttime predominance and association with sleep can be easily demonstrated.

If epilepsy surgery is considered, patients can further be evaluated with ictal and interictal SPECT imaging, which may demonstrate hyperperfusion in the region of the supplementary motor area and associated areas in the ictal phase (23). Laich and colleagues classified characteristic blood-flow patterns in the following 2 groups:

Interictal PET scanning and magnetoencephalography (MEG) may also be helpful to identify the seizure-onset zone. Interictal PET, albeit not very sensitive, may show hypoperfusion on the mesial frontal surface of the brain, and MEG can localize magnetic and electrical dipoles to the appropriate brain region.

No single specific antiseizure medication has been shown to be superior in frontal lobe epilepsy or asymmetric tonic seizures. Typical medications used in these patients include, but are not limited to, carbamazepine, oxycarbamazepine, eslicarbazepine, lamotrigine, topiramate, zonisamide, valproic acid, levetiracetam (17), lacosamide, and perampanel. Perampanel has been shown to be especially effective in a subgroup of secondarily generalized seizures (22). Similarly, a study looking at the subgroup of patients with secondarily generalized seizures pooled data from the pivotal phase III studies (28). Brivaracetam greater than 50 mg/day was shown to result in 30.4% of patients achieving seizure freedom during the 12-week therapy phase. Medication side-effect profile should be considered in each individual patient. Due to the teratogenic effect of valproic acid, it should be avoided in women in their reproductive years. Comorbidities should also be considered in choosing the appropriate antiseizure medications. For example, topiramate may be helpful in patients with comorbid migraines. Levetiracetam and perampanel may worsen preexisting depression or psychiatric disease. In a practice guideline update summary, level A evidence was shown with pregabiline and perampanel for adult drug-resistant focal epilepsy (18). Cenobamate is an approved carbamate derivative with demonstrated efficacy for focal epilepsy (21).

Intractable seizures may respond to surgery. An anterior callosotomy can also be considered for patients refractory to medication management (16). Usually, a failure of monotherapy of 2 medications at appropriate doses is sufficient to refer the patient to a level 4 epilepsy center for surgical consideration (10). Surgical evaluation may include intracranial EEG evaluation.

Success rate after supplementary motor area resection ranges between 20% and 80%. Most studies report 50% to 70% favorable seizure outcomes (24). Epilepsy surgery can also be successful in patients who have normal MRI and undergo surgery. 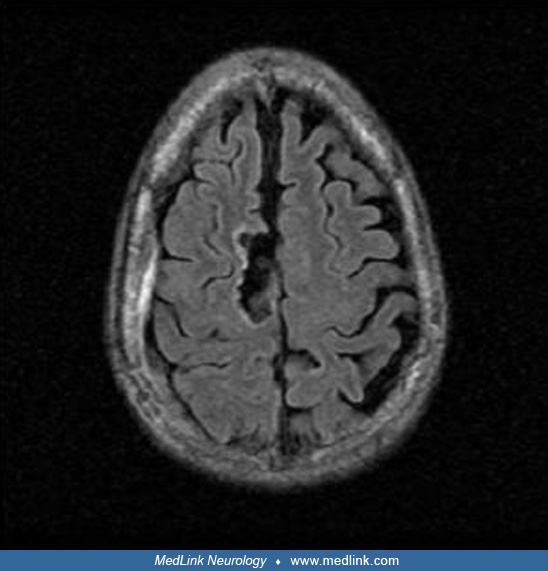 The goal of epilepsy surgery should address psychosocial functioning, including employment (24).

Consideration is similar to any other patient with focal seizures and includes the risk of teratogenesis from antiseizure drugs (02).

Anesthetic considerations are similar to any other patient with focal seizures and are dependent on underlying etiology. Direct cortical stimulations to localize the motor strip during surgical resection of lesions in proximity to primary somatosensory cortex may necessitate the avoidance of muscle relaxants (08).