Generalized onset clonic seizures are a relatively rare type of motor (convulsive) seizures mainly affecting infants and very young children. They also occur in patients with metabolic and electrolyte derangements. Clinically, they manifest with bilateral, rhythmic clonic convulsions, with each clonic event lasting fewer than 100 ms at a repetitive rate of 1 to 3 Hz. Consciousness is usually lost or impaired. There is significant misperception in terminology and definition and particularly in their differentiation from myoclonus. In this article, the author details the clinical manifestations, pathophysiology, EEG, differential diagnosis, and management of patients with generalized onset clonic seizures.

Generalized onset clonic seizures were mainly investigated by Henri Gastaut and his school in Marseilles (13).

Clonic seizures. Perhaps because they occur almost exclusively in early childhood, the clonic generalized epileptic seizures are recognized even less frequently than the tonic generalized epileptic seizures. They are encountered most often by family practitioners and pediatricians rather than specialists in neurology or epileptology. Although neglected in the literature, these seizures are frequent.

Clinical description. The attacks begin with loss of consciousness associated either with sudden hypotonia or, conversely, with a brief generalized tonic spasm, sometimes so abbreviated that it could be considered as massive bilateral myoclonus. Both will cause falling. The child then remains on the floor for 1 or more minutes and is seized by a series of bilateral myoclonus, usually generalized, although often asymmetrical and predominating on 1 side or in 1 limb. Subsequently, the variability of amplitude, frequency, and spatial distribution of these jerks from one moment to the next may become extraordinary. The most unlikely combinations are observed. Rapid low amplitude twitching of facial muscles, for instance, may be associated with infrequent but very intense jerks of the upper limbs and with such rapid myoclonus of the lower limbs that virtual tetanic contraction results. Certain authors believe that in some attacks the entire body can jerk at such a high frequency that they could be described as “vibratory generalized epileptic seizures.” In our experience, the existence of such seizures is very doubtful, and they would have to be distinguished from the vibratory periods of the generalized tonic-clonic seizures and from certain rare tremors that may occur during epileptic automatisms.

In some children, particularly those aged 1 to 3 years, the myoclonus remains bilaterally synchronous and massive throughout the attack, rather than showing such complex and unstable patterns.

The autonomic changes are relatively important during prolonged seizures in which accumulated bronchial secretions may cause respiratory distress. Regaining of consciousness is rapid after brief seizures. Those of long duration, however, may be followed by a confusional or even comatose state with generalized muscular hypotonia and areflexia.

Other forms of clonic seizures, which are seen in older subjects, are more properly considered as absence status with marked myoclonus, often rhythmic, or prolonged myoclonic absences with the jerks repeated at 3/sec.

NREM sleep is frequently accompanied by bilaterally synchronous polyspike discharges sometimes associated with myoclonus and leading at times to a hypnic clonic generalized epileptic seizure. However, both discharges and seizures are absent from REM sleep (13).

Clonic seizures are defined as follows in the ILAE glossary: 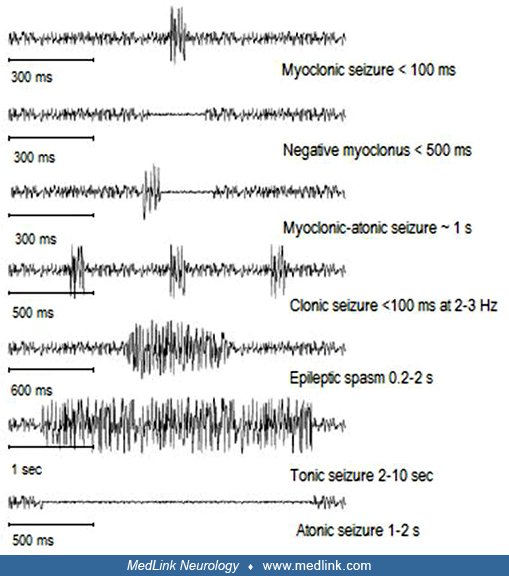 This has created significant overlap in what to call clonic or myoclonic seizures, and often these terms are used interchangeably. An example of this is “myoclonic absence seizures,” which manifest with clonic rather than myoclonic motor manifestations.

Generalized onset clonic seizures, by definition, manifest with bilateral rhythmic clonic convulsions only. Their duration varies from minutes to hours, but each clonic event lasts fewer 100 ms at a rate of 1 to 3 Hz.

They also differ from other types of seizure that manifest with tonic components mixed with myoclonus (eg, eyelid myoclonia). However, repetitive clonic seizures are clearly manifested in the so-called “myoclonic absence seizures” in which the motor component is clonic rhythmic at 2.5 to 4.5 Hz, rather than myoclonic.

In 1 study with video-EEG documentation, only 6 of 101 distinct infantile seizures of 77 infants aged 1 month to 2 years were classified as generalized onset clonic seizures (15). These seizures were characterized by generalized clonic jerks (bilateral clonus). However, several of these were so brief that one might argue that the seizures were simply a combination of several repeated or erratic myoclonia (21).

Following is a case illustrated with ictal EEG recording by Gastaut and Broughton as a clonic generalized seizure with significant comments by the authors in regard to its differentiation from other type of seizures in childhood (13).

Very little is known about the localization and pathophysiology of these seizures.

By definition, “generalized onset seizures are conceptualized as originating at some point within, and rapidly engaging, bilaterally distributed networks. Such bilateral networks can include cortical and subcortical structures, but do not necessarily include the entire cortex. Although individual seizure onsets can appear localized, the location and lateralization are not consistent from one seizure to another. Generalized seizures can be asymmetric” (01).

According to the ILAE core group, the mechanisms of clonic seizures appear to be due primarily to rhythmic excitatory discharges whereas the clonic phase of GTCS represents the phasing in of seizure-suppressing mechanisms (09).

In animals, Toth and associates found that insertional inactivation of the mouse jrk gene resulted in handling-induced whole body jerks, generalized clonic seizures, and epileptic brain activity, a phenotype termed “jerky” (26). All homozygous animals displayed seizures. Homozygotes also displayed some degree of kyphosis of the thoracic spine and were proportionate dwarfs. Approximately half died before 3 months of age. Approximately 50% of the hemizygous animals showed generalized clonic seizures. The other hemizygous animals either displayed seizures limited to the head and limbs or showed no seizure activity. There was no apparent correlation between the level of jerky mRNA and the severity of seizures in hemizygote.

Some etiologies such as electrolyte and metabolic disturbances can be prevented.

In early childhood and the epileptic encephalopathies, GTCS may appear only as generalized clonic convulsions, in which the preceding tonic phase is brief and inconspicuous.

Focal onset clonic seizures may present with bilateral clonic convulsions of the upper extremities without clouding of consciousness; however, in these cases, there are no EEG generalized spike-wave discharges, and the seizures originate in the supplementary motor area.

Nonepileptic attacks. Extremely sustained startle-induced clonus is a nonepileptic motor attack mimicking clonic seizures in children with encephalopathy (18). Clonus is a pathological motor pattern characterized by involuntary, rhythmic, and brisk muscular contractions in response to peripheral stimuli producing muscle stretching. It indicates pathological involvement of the corticospinal tract and can be considered as a functional spastic movement disorder of variable clinical presentation and duration. Severe and prolonged episodes of startle-induced clonic attacks associated with severe apnea may rarely occur in infants with severe encephalopathy. The clinical characteristics of such episodes are very similar to those of clonic epileptic seizures.

Generalized clonic seizures in infants should be distinguished from jitteriness or shuddering attacks (17).

The ILAE Neurophysiology Task Force published a comprehensive 2 part review on the role of EEG in the diagnosis and classification of the epilepsy syndrome, which can be a tool for clinical practice (16).

Ictal EEG. Each clonic convulsion corresponds to a generalized discharge of spike and multiple spikes or, more rarely, a mixture of rapid rhythms and slow waves (13; 04). Although individual seizure onsets can appear localized, the location and lateralization are not consistent from one seizure to another (04).

In 1 study with video-EEG documentation, the EEG ictal features of 6 infants consisted of runs of repetitive generalized sharp waves or spikes with occipital or frontal predominance (15). Because the seizures were rather diffuse, no spread was observed on evolution. Four (66%) stuttered (repeated epochs of ictal features mixed with epochs of usual background activity), and 2 (33%) had an abrupt termination (clear-cut instant change in EEG features from ictal activity to postictal features, such as attenuation, slowing, or return to the usual background activity). Clonus did not reliably correlate with the presence of spikes (15). 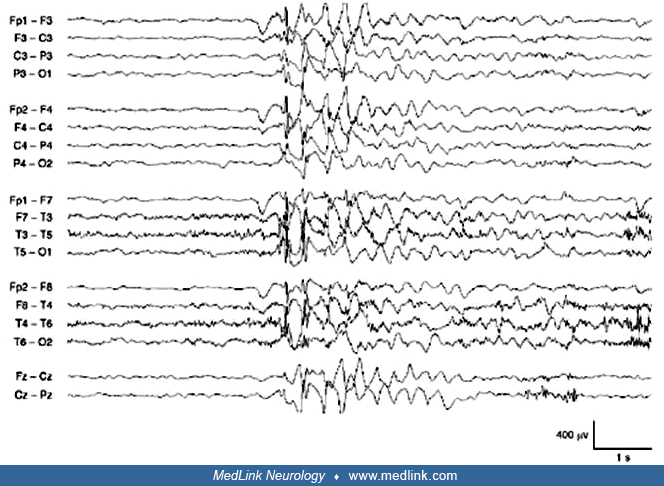 Other tests. Brain imaging and other tests (eg, metabolic, electrolytes) may be needed to detect the underlying pathology.

Ketogenic diet is indicated in severe infantile epileptic encephalopathies with clonic seizures (19). Also, there is a growing interest in the use of cannabidiol for the treatment of these severe epileptic encephalopathies like Dravet and Lennox-Gastaut syndrome. In a double-blind, placebo-controlled trial, in a 14-week treatment period of patients with Dravet syndrome, cannabidiol was significantly beneficial particularly in convulsive-seizures, with 5% of patients becoming seizure free though associated with higher rates of adverse events (06; 07). In June 2018, Epidiolex (cannabidiol oral formulation) from GW Pharmaceuticals obtained marketing authorization by the FDA for the treatment of Dravet and Lennox-Gastaut syndrome. More information can be accessed at:http://www.draccon.com/dravet-pipeline. The package insert for Epidiolex also provides information and can be reviewed at:https://www.accessdata.fda.gov/drugsatfda_docs/label/2018/210365lbl.pdf.

A real-time automated detection of clonic seizures in newborns has been described based on a low complexity image processing approach extracting the differential average luminance from videotaped body movements (23). This algorithm reliably detects neonatal clonic seizures and differentiates them from either noise, random movements, or other seizure types.