Fibromuscular dysplasia is a nonatherosclerotic vasculopathy affecting various circulatory beds, including the cerebral circulation. Cerebrovascular lesions may include arterial dissection and aneurysms. Neurologic manifestations typically result from ischemic events associated with these lesions. Management considerations are highlighted in this overview of cerebrovascular fibromuscular dysplasia.

Fibromuscular dysplasia, also known as fibromuscular hyperplasia, medial hyperplasia, or arterial dysplasia, is a relatively uncommon multifocal arterial disease of unknown cause, characterized by nonatherosclerotic abnormalities involving the smooth muscle, fibrous and elastic tissue, of small- to medium-sized arterial walls (75). The first clinical and pathological description was by Leadbetter and Burkland in 1938 (44). They reported a 5-year-old boy with renal hypertension who underwent a unilateral nephrectomy. The affected renal artery was noted to harbor "an intraarterial mass of smooth muscle." For many years it was assumed that fibromuscular dysplasia damaged only renal vessels. However, in 1964, Palubinskas and Ripley published a case of fibromuscular dysplasia involving the celiac artery in a 36-year-old woman; this was the first indication that the disease may be generalized (61). Subsequent reports followed that described involvement of the visceral arteries, iliac artery, femoral artery, axillary artery, subclavian artery, coronary artery, aorta, and cephalic arteries (35; 59; 48). Involvement of the internal carotid artery was radiologically and histologically proven in 1965 (13). Cephalic vessels are involved in 25% to 30% of reported cases of fibromuscular dysplasia (06). The cephalic vessels are the second most common location, after renal arteries. Fibromuscular dysplasia predominantly involves the cervical and distal internal carotid artery (the location of the disease in 90% of cases). However, similar vascular abnormalities are observed in the middle cerebral arteries, the anterior cerebral arteries, the posterior cerebral arteries, the vertebral arteries, and the basilar artery (19; 59; 34; 85; 04; 15; 30; 84; 66). Moyamoya syndrome has also been described in association with fibromuscular dysplasia (60; 79). Vertebral artery involvement is less common and typically coexists with carotid involvement. Although cephalic fibromuscular dysplasia is often an incidental finding on autopsy or angiography, it could be complicated by cerebral infarction secondary to thromboemboli arising from irregularities of the arterial wall, spontaneous arterial dissection, formation of a carotid artery cavernous sinus fistula, or development of an aneurysm (35; 59; 76; 07). It was noted that classic fibromuscular dysplasia features are uncommonly associated with carotid webs (74). Sethi and colleagues have described a characteristic “S-curve” in the mid-distal carotid that is suggestive of the underlying disorder (73; 31). Multiple vessels may be involved with dissecting pathology in such cases (28; 25). Subarachnoid hemorrhage may result from saccular aneurysmal rupture or extension of a dissecting aneurysm.

The etiology of fibromuscular dysplasia is not known. Several causes have been hypothesized, including congenital or inherited disorder, immunologic or humoral disturbance, ischemic or mechanical injury, or a viral etiology.

The occurrence of families with several members afflicted by fibromuscular dysplasia (22) supports the congenital inherited disorder hypothesis. Only recently has the first genetic locus been linked with fibromuscular dysplasia (16). The phosphatase and actin regulator 1 gene (PHACTR1) may influence transcription activity of the endothelin-1 gene (EDN1) located nearby on chromosome 6. Additionally, the PHACTR1 locus has also been associated with vascular hypertrophy, carotid dissection, migraine, and coronary artery disease (16). A formal pedigree analysis conducted in 20 families revealed vertical transmission of the disease afflicting both sexes. This inheritance pattern was most consistent with an autosomal dominant trait with variable penetrance (68). Cephalic fibromuscular dysplasia has also been observed in a few patients with genetic deficiency of alpha-1 antitrypsin (71). Alpha-1 antitrypsin is an inhibitor of proteolytic enzymes. Its deficiency has been linked to the degradation of connective tissues in various organs, including the arterial wall. Young patients with this condition have been reported to harbor fusiform aneurysms associated with fibromuscular dysplasia of intimal type (72). In addition, the typical anatomic distribution of fibromuscular dysplasia (the cervical internal carotid artery and renal artery) and the frequent coexistence with other somatic malformations (eg, scoliosis and other visceroskeletal abnormalities, cystic medial necrosis, coarctation of aorta, and Ehlers-Danlos syndrome type IV) suggest the possibility of a common mesenchymal disorder (51; 21; 49; 48). Familial fibromuscular dysplasia has been described in association with brachydactyly, syndactyly, cardiac abnormalities, and osteogenesis imperfecta (23; 80).

Fibromuscular dysplasia has a higher incidence in young women, and observational studies have linked it to oral contraceptive use; this suggests a hormonal influence. For example, in a radiologic study of women with a transient ischemic attack or stroke while taking oral contraception, 18% of the patients had radiologic features consistent with fibromuscular dysplasia (26). Other studies have shown similar abnormalities in young women who had ergotamine toxicity or chronic use of methysergide during treatment of migraine headaches (48; 32). An association between migraine and cervicocephalic arterial dissection has been revisited, suggesting that migrainous events may be secondary to abnormalities in the arterial wall and its extracellular matrix (83). Proponents of an ischemic or mechanical injury theory argue that the abnormalities seen in fibromuscular dysplasia may be explained by recurrent mechanical or thrombotic obliteration of the vaso vasorum from repeated microtrauma, leading to mural ischemia and subsequent cell mutation (48). A viral etiology has been postulated because of similar vessel wall abnormalities seen with Rubella syndrome and a disease of viral origin found in domestic turkeys that is similar to fibromuscular dysplasia (47).

No specific methods of preventing fibromuscular dysplasia are known. Prevention of complications may involve management of known or suspected risk factors for stroke (eg, hypertension, atrial fibrillation, smoking, and use of birth control pills).

The differential diagnosis includes atherosclerosis, arterial dissection, Takayasu arteritis, granulomatous angiitis, segmental mediolytic arteriopathy, stationary arterial waves, and vascular spastic contractions (32). Unlike fibromuscular dysplasia, atherosclerotic lesions usually afflict the aorta and the proximal 1 cm to 2 cm of the internal carotid artery or the origin of the arch vessels. However, atherosclerosis may coexist with fibromuscular dysplasia in up to 35% of the cases, making it difficult to implicate fibromuscular dysplasia as the cause of neurologic complication. Takayasu arteritis has a propensity to affect young women, and typically damages the aortic arch and the origin to proximal segments of its major branches. Granulomatous angitis is seen in medium-sized arteries and precapillary arterioles. Although this disease may have similar "string-of-beads" appearance on angiography, its clinical presentation is more detrimental, with relatively rapid progression leading frequently to death within 1 to 2 years. A similarly poor outcome is seen in segmental mediolytic arteriopathy. This rare disorder is a subacute mucoid degeneration of the arterial media in young adults. Unlike fibromuscular dysplasia, there is less predilection for systemic vessels other than the aorta and cephalic vasculature (45). Stationary arterial waves are short, regular distal arterial constrictions, followed by areas of apparent dilatation seen as a result of elevated intracranial pressure or subarachnoid hemorrhage (69). Circular spastic contractions may cause arterial narrowing not only in the cervical internal carotid artery but also near the origin of the vessel. These contractions usually occur at the site of arterial catheterization; the site of the abnormality changes with each injection of contrast media during angiography (69).

The evaluation of symptomatic subjects should focus on identifying more common causes of cerebrovascular insults, such as atherosclerotic lesions, cardiac abnormalities, or alteration of hematologic or coagulation status. In patients with transient ischemic attack or ischemic stroke, a head CT or MRI and carotid and cardiac noninvasive evaluation (eg, transthoracic echocardiogram, transesophageal echocardiogram, 24-hour Holter monitor, and cardiac stress test) are indicated. The yield of carotid duplex ultrasonography may be limited due to proximity of the typical vascular lesion with the skull base. Color Doppler imaging has been used for lesion detection, yet the sensitivity remains low due to lesion location (03). Angiography remains the standard test in patients with suspected extracranial or intracranial arterial disease, including fibromuscular dysplasia. MRI and MR angiography techniques are now able to differentiate tubular fibromuscular dysplasia from arterial dissection or arterial hypoplasia (20). 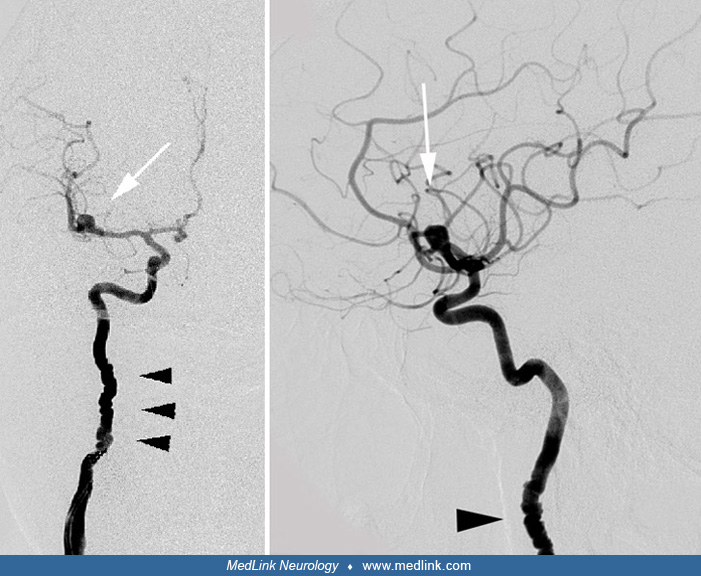 Fibromuscular dysplasia angiogram
This 47-year-old female presented with headaches. Digital subtraction angiography images in the AP and lateral projection demonstrating the classic “string-of-beads” stenoses of the internal carotid artery (arrow heads), which is ...

Although fibromuscular dysplasia has a higher frequency in young women, its effects in pregnancy and vice versa are not well known. Ezra and colleagues reported a case of cephalic fibromuscular dysplasia complicating pregnancy in a 24-year-old woman (18). The patient suffered a right hemiparesis and paresthesia in the 39th week of gestation despite prophylactic treatment. Following an uncomplicated delivery by cesarean section, the patient had a residual right-hand weakness, but otherwise she had a normal neurologic exam. Although the mechanism of this patient's stroke was not determined, the authors recommended prophylaxis with antiplatelet agents in women with symptomatic fibromuscular dysplasia during pregnancy. There is no reference in the literature regarding maternal versus fetal risk with or without treatment in patients with fibromuscular dysplasia.