This article includes discussion of diffuse astrocytomas, IDH wildtype, with particular focus on glioblastoma, IDH wildtype, including classification and treatment.

Glioblastoma, IDH wildtype, is an aggressive tumor with median age at diagnosis of 59 years (39; 30). Presenting symptoms vary depending on tumor location and may also present with hemorrhage into the tumor or signs of increased intracranial pressure. IDH wildtype gliomas are less likely to present with seizures (18% to 34%) versus IDH mutant tumors (59% to 74%), which is likely be related to the excitatory potential of D-2-hydroxygluterate, the product of IDH mutation (10). IDH wildtype gliomas are more likely to present with cognitive impairment in memory and processing speed as well as visuospatial, language, and executive function hypothesized to be secondary to rate of growth (51).

Prognosis for glioblastoma, IDH wildtype, is poor with median survival of 15 to 21 months. Known key prognostic factors include age at diagnosis, functional status, extent of resection, and MGMT promoter methylation (49; 45; 30). These are discussed in further detail below.

Additional factors to be considered include risk of thromboembolic events as well as toxicities from treatment, including but not limited to, toxicities from acute and chronic steroid use, fatigue, and comorbid psychiatric disorders.

Vignette 1. A 53-year-old right-handed male with history of well controlled hypertension and diabetes presented with 2 weeks dizziness, headaches, and falls. His examination was notable for mild left facial weakness, and MRI revealed a large right temporal enhancing mass with midline shift and herniation.

He underwent gross total resection of the right temporal mass with pathology consistent with glioblastoma, IDH wildtype, and MGMT methylated. Postoperatively, he had mild left-sided weakness and went on to receive fractionated radiation with concurrent temozolomide followed by 6 cycles of adjuvant temozolomide. He continued stable and free of disease progression at examination 27 months after diagnosis.

Vignette 2. A 68-year-old right-handed male with history of hypertension presented with a week of right focal motor seizure without loss of consciousness. MRI revealed a minimally enhancing, infiltrative mass in the left cingulate. 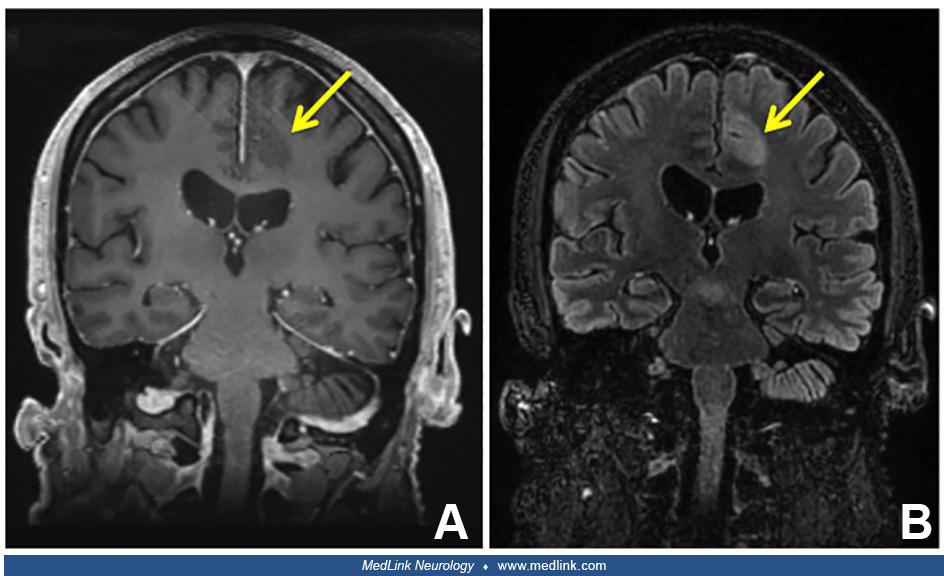 After his seizures were controlled, he underwent gross total resection of the left cingulate mass with histopathology assessment consistent with at least an anaplastic astrocytoma without presence of microvascular proliferation or necrosis. However, given his age, the lack of IDH mutation on immunohistochemistry, subsequent sequencing identification amplification of EGFR (consistent with diffuse astrocytic glioma, IDH-wildtype), and with molecular features of glioblastoma WHO grade IV, he went on to receive radiation and concurrent temozolomide.

These two clinical vignettes highlight the heterogeneity of neurologic symptoms and radiologic findings of glioblastoma and importance of thorough pathologic review, including sequencing in cases with high clinical suspicion of glioblastoma.

Stem-like cells within the CNS are hypothesized to be cells of origin of glioblastoma (Alcantara et al 2019). Work in animal models demonstrates neural stem cells in the subventricular zone are the potential cell of origin for at least a subset of glioblastomas (Alcantara and Parada 2016; 24). Several genetic risk factors for gliomas are now known, including rare mutations confined to specific families and more common inherited variants in 25 independent genetic loci (38; 42; 20; 29).

Exposure to ionizing radiation, particularly in childhood, remains the strongest environmental risk factor for diffuse glioma. Ionizing radiation damages DNA, which can lead to oncogenesis as early as 7 to 9 years after exposure (50).

Glioblastoma, IDH wildtype, is a heterogeneous tumor with multiple alterations in numerous pathways. Data from The Cancer Genome Atlas (TCGA) identified numerous mutations noted within key pathways of (1) receptor kinases (EGFR, PDGFRA), RAS (NF1), and PI3K (PTEN) dysregulating cell proliferation; (2) p53 signaling pathway (CDKN2A, MDM2/4) activation of the oncogene; and (3) RB signaling pathway (CDK4, CDKN2A/B, RB) resulting in inappropriate progression through the cell cycle (08). Amplifications, deletions, mutations, and other alterations altering multiple of these pathways are seen within a given tumor and highlight the challenges in using a targeted approach when treating these tumors (08). Additional work identified frequent mutations in the promoter region of TERT, increasing expression of telomerase and, in effect, cell immortality (21). Alternative methods for lengthening telomeres are occasionally seen in astrocytomas through mutations in ATRX, though are more common in lower grade astrocytoma (39). Additionally, identification of histone mutation H3 K27, which is seen in diffuse midline, is also IDH wildtype astrocytoma and discussed separately (Wu et al 2012).

Neuroimaging with contrast-enhanced MRI is the standard for identification of mass lesion in the brain. The majority of glioblastoma, IDH wildtype, are lesions with heterogenous contrast enhancement often associated with significant edema secondary to their high vascularity and disruption of the blood-brain barrier (Neuwelt 2004; 43). However, contrast-enhancement is not an absolute surrogate for tumor histology, with some glioblastoma lacking contrast enhancement and several low grade gliomas (including several that are IDH wildtype) avidly contrast-enhancing (43). Glioblastomas may be single lesions, multicentric, or multifocal, and particular attention should be given to evaluate for additional, distant areas of T2/FLAIR hyperintensity that may not enhance but may be additional sites of disease (04). Depending on patient history, radiologic differential diagnosis, etc., CT of chest, abdomen, and pelvis could be considered for evaluation of systemic cancer (03).

Neuroimaging helps identify differential diagnosis (as discussed above) and informs the plan for surgical approach for procurement of tissue and histopathologic or molecular evaluation. Histopathologic criteria for glioblastoma include increased mitoses, nuclear atypia, microvascular proliferation, and necrosis (25). In 2016, the WHO revised the classification of several CNS tumors to incorporate molecular markers into histopathology for an integrated diagnosis (26). The presence or absence of IDH, for which there is an immunohistochemical stain for the most common R132H mutation, defines molecular subtypes of glioblastoma and astrocytoma with distinct survival experiences (26; 30). There are several histology variants and patterns of glioblastoma, IDH wildtype, Including gliosarcoma, giant cell glioblastoma, epitheloid glioblastoma, granular cell glioblastoma, small cell glioblastoma, and glioblastoma with primitive neuronal component that are descriptive terms and currently are not treated as separate entities (30).

Diffuse or anaplastic astrocytomas that do not meet the histologic criteria for glioblastoma, but are IDH wildtype, are less common than those that meet the criteria (30). Further molecular testing should be considered to evaluate for genetic alterations (EGFR amplification; the combined gain of chromosome 7 and loss of chromosome 10; or TERT promoter mutation) that are consistent with diffuse astrocytic glioma, IDH-wildtype, with molecular features of glioblastoma, WHO grade IV, and share a survival experience similar to glioblastoma (07). This is oftentimes most easily and cost-effectively accomplished by a broad next-generation sequencing panel as opposed to via individual tests for specific genes. Use of DNA methylation signatures are also being increasingly used to subclassify brain tumors with fewer technical limitations compared to next-generation sequencing (09).

Though not incorporated into the revised WHO 2016 rain tumor classification system, the DNA repair enzyme 6-0-methylguanine-DNA methyltransferase (MGMT) is an important prognostic and predictive biomarker in glioblastoma, IDH wildtype. Functionally, MGMT allows repair of DNA damage caused by alkylating chemotherapy, such as temozolomide discussed in detail below, and resistance (16). However, sensitivity to temozolomide is increased when MGMT is silenced via promoter methylation (53). MGMT is methylated in approximately 40% of glioblastoma, IDH wildtype, and is not only a predictor of response to temozolomide but is also a prognostic marker (05; 06; 18), and is particularly helpful in treatment decisions in the elderly as discussed below.

Radiation and chemotherapy. Secondary to the infiltrative nature of glioblastoma, and all diffuse gliomas, maximum resection is not considered curative. In 2005, the standard of care of fractionated radiation to 60 Gy in approximately 30 fractions with concurrent and adjuvant temozolomide was published and has remained the backbone of our treatment since that time (49; 47). Adding the alkylating agent temozolomide to fractionated radiation improved overall survival by almost 3 months. Temozolomide is given concurrently at 75 mg/m2 followed by adjuvant treatment at 150 to 200 mg/m2 on days 1 to 5 of a 28-day cycle, typically for 6 cycles. There is some variability between clinical trials and practitioners regarding the total number of cycles utilized.

Given the sensitivity of temozolomide in MGMT methylated glioblastoma, attempts to further improve on efficacy have been investigated. In one such approach, it has been combined with another alkylating agent, lomustine, in the upfront setting. Results from the relatively small phase 3 study demonstrated survival improvement of more than16 months; marked toxicity was also seen (19; 46). Additional investigations of this regimen are planned.

There is no evidence for use of anti-angiogenic agents, such as bevacizumab, in unselected, newly diagnosed glioblastoma as no improvement in overall survival was seen in two phase 3 trials (11; 17).

Palliative care. Glioblastoma, IDH wildtype, is a terminal illness and falls under the guidelines from the NCCN (32) and ASCO (American Society of Clinical Oncology) (14) for early intervention with palliative care.

Recurrent disease. There is no standard of care for treatment at recurrence. Whenever feasible, consideration should be given to enrollment in a clinical trial. FDA-approved treatments are limited and include bevacizumab with or without concurrent cytotoxic chemotherapy, such as lomustine. However, additional resection, re-irradiation, re-challenge with temozolomide, targeted agents, and immunotherapy may considered in the correct clinical scenario.

Despite aggressive multimodal treatment and numerous large, phase 3 clinical trials, significant improvement in survival for glioblastoma, IDH wildtype, remains limited. Median overall survival continues to be around 15 to 21 months (48; 30), and less than 10% to 15% of patients survive 5 years after diagnosis (45; 48). Prognostic factors include age and performance status at diagnosis, extent of resection, and MGMT promoter methylation status.

Many glioblastoma, IDH wildtype, patients are diagnosed in their 70s and 80s (30). However, many clinical trials that defined the standard of care for these patients excluded patients older than 65 years of age, leaving a gap in optimal treatment for this large subset of patients (49). Given the toxicities of fully fractionated radiation and the overall worse outcomes in elderly patients, several trials investigated alternate dosing of radiation and chemotherapy (27; 52; 40). Current consideration is given to hypofractionated radiation to 40 Gy in 15 fractions, with consideration of concurrent and adjuvant temozolomide in patients older than 65 years at diagnosis (40; 55). Similar course of treatment can also be considered in patients with poor functional status.

Temozolomide is mutagenic and is contraindicated during pregnancy. Extensive caution is taken when considering the role of radiation therapy in pregnancy. Breastfeeding is also contraindicated with temozolomide therapy. It is unknown what the effects of tumor-treating fields may be in the setting of pregnancy. Similar contraindications are noted with agents utilized in the treatment of recurrent or progressive glioblastoma. Patients with glioblastoma, IDH wildtype, should strongly consider evaluation by a high-risk obstetrician.

Precautions with anesthesia are the same as for any intracranial surgery.