Herpes simplex virus infections are common, and the virus is latent in ganglia in a large portion of the population. The virus may spread to the brain along a trigeminal or olfactory pathway and produce an encephalitis with characteristic localization in the temporal and frontal lobes. Early diagnosis and initiation of therapy with intravenous acyclovir are important in reducing the morbidity and mortality of herpes simplex encephalitis, so clinical suspicion must always be high for this disease. In this article, the author reviews the clinical features, pathogenesis, epidemiology, diagnosis, and management of herpes simplex encephalitis.

The clinical features of herpes simplex encephalitis have largely been defined on the basis of autopsy-confirmed fatal cases and from clinical trials performed by the National Institutes of Allergy and Infectious Diseases Collaborative Antiviral Study Group; these findings were based on diagnostic brain biopsy proven cases of focal encephalitis. Hence, the clinical features in these patients may reflect severe disease and perhaps not the entire spectrum of disease. The disease is of acute onset, usually less than a week. The main features include headache, fever, and alteration of consciousness, which may develop over a period of hours or more slowly over days. Headache is a prominent early symptom and is present in about 90% of cases. Fever is almost always present, and its absence should normally cast doubt on the diagnosis. Focal neurologic features may be present, including aphasia, hemiparesis, and visual field defects (superior quadrant). Focal or generalized seizures are very common (98), and olfactory or gustatory hallucinations may occur as well. Behavioral disturbances (sometimes bizarre), personality changes, or psychotic features may occur and be prominent, and psychiatric disease is sometimes suspected. Signs of autonomic dysfunction are also often present. Focal piloerection has been described (16). Papilledema is present in a minority of patients. Mild or atypical forms of herpes simplex encephalitis have been recognized without focal features; they are associated with herpes simplex virus-1 and virus-2 infections, immunosuppression with corticosteroids or coexisting HIV infection, or disease predominantly involving the nondominant temporal lobe (28; 34; 106). Herpes simplex encephalitis has been recognized during treatment with monoclonal antibody tumor necrosis factor-alpha inhibitors for rheumatological disorders (15) and with therapy of multiple sclerosis with fingolimod (83). Unusual clinical presentations, including the opercular syndrome (facio-pharyngo-glosso-masticatory diplegia) (02), may be difficult to recognize as herpes simplex encephalitis. A history of cold sores is no more common in patients with herpes simplex encephalitis than in patients with nonherpes simplex encephalitis (125). Herpes simplex virus-2 encephalitis occurs in elderly immunosuppressed patients, may be indistinguishable from that caused by herpes simplex virus-1, and the prognosis may be unfavorable even when antiviral therapy is given (73). Herpes simplex encephalitis may develop in hospitalized patients, particularly in critical care units (50).

A 20-year-old female university student presented with a history of a few days of headache. She then experienced increased headache, nausea and vomiting, and visual hallucinations. On the next day, she developed a low-grade fever and confusion. On admission to the hospital, her temperature was 38.2°C. She demonstrated word-finding difficulty and made paraphasic errors. Motor examination was normal, with symmetrical reflexes and downgoing toes. An MRI scan of her head showed expansion of the medial left temporal lobe. Hyperintense signal was observed in the medial left temporal lobe and left insular cortex on T2-weighted images and fluid-attenuated inversion recovery sequences. 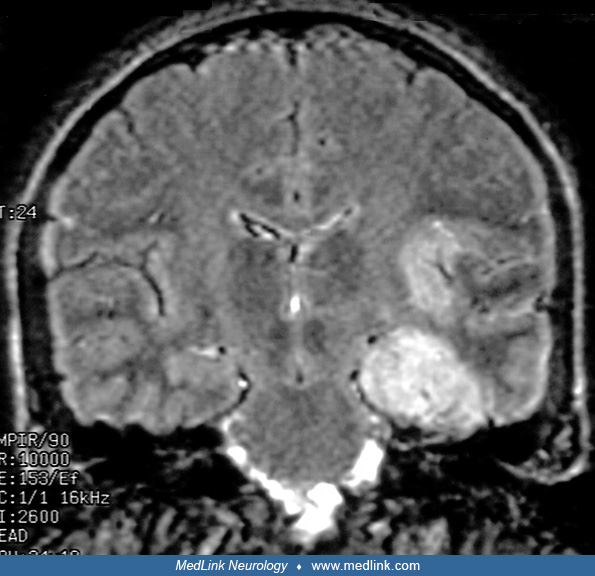 No gadolinium enhancement was observed. An EEG showed high-voltage slow waves over the left frontotemporal region without epileptiform activity. CSF showed 185 mononuclear cells, five polymorphonuclear leukocytes, and three erythrocytes per µL. CSF protein was mildly elevated, and CSF glucose was normal. Herpes simplex virus DNA was detected in CSF using polymerase chain reaction amplification. The patient was treated with 10 mg/kg of intravenous acyclovir every 8 hours for 21 days. She had persistent impaired recent verbal memory and mild word-finding difficulty, and she made paraphasic errors. She was not able to return to the university.

Primary infection with herpes simplex virus in susceptible (seronegative) individuals occurs after exposure of the virus to a mucosal surface or abraded skin. The virus is subsequently transported along axons via retrograde transport to nuclei of neurons in local peripheral sensory (trigeminal or dorsal root) ganglia. The viral genome remains in a latent state in peripheral sensory ganglia for the life of the host. A variety of stimuli, including physical or emotional stress, fever, menstruation, or ultraviolet light, cause reactivation of the virus with viral gene expression and the development of recurrent infections, most commonly skin lesions (eg, cold sores). The majority of the population becomes infected with herpes simplex virus-1 by 40 years of age. Most herpes simplex virus-2 infections are sexually transmitted; women and African Americans have higher infection rates than men and Caucasians, respectively.

There are no useful measures for the prevention of herpes simplex encephalitis; herpes simplex virus infections are common, and the virus is latent in ganglia in a large portion of the population. A high index of clinical suspicion, appropriate investigations, and early treatment with intravenous acyclovir are all important in obtaining the best possible clinical outcome.

Early diagnosis of herpes simplex encephalitis is important for initiation of antiviral therapy at the earliest possible time, and therapy should be initiated even before the diagnostic investigations are completed. Basaran and colleagues reported hyponatremia (< 135 mEq/L) in 56% of patients with herpes simplex encephalitis due to herpes simplex virus-1 versus 20% of patients with nonherpes simplex virus-1 viral encephalitis (12). Focal electroencephalographic abnormalities are present in about 80% of cases (125). Sharp and slow wave activity is usually localized to the temporal region, and periodic complexes may be present (111; 54; 102; 19). Brain imaging studies, particularly MRI, usually show abnormalities in involved areas including the temporal lobes, although rare patients with normal MRI studies have been reported (27; 52; 48). Technetium brain scans and CT head scans have much lower sensitivity than MRI. CT shows hypodense lesions in the temporal lobe and orbitofrontal region, which may demonstrate mass effect, regions of hemorrhage, and irregular contrast enhancement. A CT perfusion study reported a focal increase in blood flow (70). On MRI, hyperintense signal intensities are typically seen on T2-weighted images in typical sites, including one or both inferomedial temporal lobes, insular cortex, inferior frontal lobes, cingulate gyrus, and thalamus, with foci of hemorrhage due to the presence of degradation products of hemoglobin (25). T1-weighted images show hypointense signal in the same areas, and meningeal enhancement may be demonstrated following administration of gadolinium (25), but one study found that pre- and postcontrast T1-weighted images were the least informative sequences compared with others (49). FLAIR sequences demonstrate superior definition of temporal lobe abnormalities compared with standard T1- and T2-weighted images (34). It is not yet clear how MRI abnormalities evolve over a period of months after herpes simplex encephalitis associated with clinical improvement (36). Diffusion MRI studies may also be useful for early detection of lesions with diffusion-weighted imaging changes preceding FLAIR changes (74; 89). Resolution of the restricted diffusion abnormalities may correlate with clinical improvement (30). Diffusion tensor imaging in the earliest phase may show slight reduction of mean diffusivity, but in later stages it is increased in keeping with inflammatory vasogenic edema (51). Rarely, patients may have lesions in atypical locations in the brain (82; 113; 14), especially immunocompromised patients (106; 45). The early localization of lesions can be predominantly or exclusively in the frontal lobes (107). MRI lesions are more heterogeneous in herpes simplex encephalitis caused by herpes simplex virus type 2 (100). A study using diffusion-tensor imaging has shown reduced integrity of normal-appearing white matter tracts contralateral to unilateral lesions in herpes simplex encephalitis patients, which likely contribute to memory impairment (42). Rarely, herpes simplex encephalitis may present with intracerebral hemorrhage involving a temporal lobe, and disease progression occurs with ongoing hemorrhagic necrosis and hematoma expansion (62).

Serological diagnosis of herpes simplex virus infection is not useful clinically. A lumbar puncture may show an elevated opening pressure. CSF examination usually shows a mononuclear cell pleocytosis with a mildly elevated protein and a normal glucose. A CSF pleocytosis is present in about 97% of cases (125) but may be absent in either immunocompetent or immunosuppressed patients (95; 57; 106; 92). Cell counts are often around 100 white cells/µL, and counts above 500 white cells/µL are found in less than 10% of patients. The presence of erythrocytes in the CSF in a nontraumatic lumbar puncture is encountered with similar frequency in patients with encephalitis of other causes (125). Herpes simplex virus can be cultured only from CSF in about 4% of cases (80; 101). Intrathecal synthesis of herpes simplex virus-specific antibodies occurs in 94% to 97% of cases, but not usually until 3 to 10 days or more after the onset of symptoms (80; 58). An intrathecal immune response may be absent when antiviral therapy is started early (93).

Prior to the development of polymerase chain reaction technology and widespread use of MRI, brain biopsy was an important diagnostic test for herpes simplex encephalitis. The utility of diagnostic brain biopsy for the management of encephalitis is presently controversial, especially in light of empirical antiviral drugs and the rivaling sensitivity and specificity of polymerase chain reaction-based assays. At the present time, diagnostic brain biopsy is normally reserved for only a minority of cases of undiagnosed encephalitis that fails to respond to initial therapy.

Corticosteroids probably have a role in the treatment of vasogenic edema from the inflammatory process, particularly when there is mass effect with risk of brain herniation. There is support for a beneficial effect of corticosteroids from studies in a mouse model (75). Apart from the management of mass effect, it is unknown whether corticosteroids have a beneficial effect on the disease when combined with acyclovir. A small, nonrandomized study suggested the possibility of improved outcome with corticosteroid administration (59), but this needs confirmation. A randomized controlled clinical trial by German, Austrian, and Dutch investigators comparing acyclovir plus adjuvant dexamethasone with acyclovir plus placebo in adult patients with herpes simplex encephalitis was discontinued because of poor recruitment (72). At the present time it is unknown if there is a benefit from adjunctive therapy with corticosteroids in herpes simplex encephalitis (87) and there are no solid data supporting this therapy. A randomized, open-label, observer-blind multicenter trial is now in progress in the United Kingdom to determine whether dexamethasone in addition to standard antiviral therapy improves clinical outcomes versus antiviral therapy alone (116).

More than 20 cases of herpes simplex encephalitis in pregnancy have been reported (31). Because of the natural history of untreated disease, there is no alternative but to treat with intravenous acyclovir as in patients who are not pregnant. Acyclovir crosses the placenta and is excreted by the fetal kidney and concentrated in the amniotic fluid, but there is no accumulation of the drug in the fetus (35). The Acyclovir in Pregnancy Registry has prospectively gathered data on prenatal exposure to acyclovir; no increase in the number of birth defects and no consistent pattern of abnormalities have been noted (04).

No anesthetic agents are contraindicated in patients with herpes simplex encephalitis. Acyclovir therapy should be continued without adjustment of the dosage throughout a perioperative period.