The author explains the clinical presentation, pathophysiology, and differential diagnosis of inner ear concussion, a common cause of auditory and vestibular symptoms after closed head injury. Full recovery is the rule for posttraumatic dizziness or vertigo, which seldom persists longer than 3 months after minor traumatic brain injury.

Around 1900 histologic changes were identified in the temporal bones of individuals that sustained head injury without temporal bone fractures. Animal experiments investigating the pathophysiology of labyrinthine concussion employed either delivery of blows to the head or introduction of a pressure wave into the labyrinthine fluid (05).

Dizziness is one of the most commonly reported symptoms associated with a concussion and may be a predictor of prolonged recovery (62).

Symptoms of labyrinthine concussion may include vertigo, non-vertiginous dizziness, postural imbalance, hearing loss, tinnitus, nausea, vomiting, or some combination after head trauma. In some cases, onset may be delayed for several days. Signs may include sweating, pallor, unilateral (or bilateral) hearing loss particularly affecting high frequencies, spontaneous nystagmus, past-pointing, postural instability, Romberg sign, and gait ataxia (60; 32; 33; 54; 71; 37; 47; 48). Dizziness, vertigo, high-frequency sensorineural hearing loss, and tinnitus are particularly common (17); in some cases, there may be concomitant conductive hearing loss from disruption of the ossicular chain or from bleeding into the middle ear (09; 40; 41; 17; 25).

In some cases of labyrinthine concussion there may be positional vertigo (60; 26; 20; 12; 30; 75; 04; 17; 28; 49; 10; 82) vertigo elicited by Valsalva maneuvers (eg, coughing, sneezing, straining), or bilateral vestibular hypo function (51; 53). Posttraumatic positional vertigo is more common after severe head injury, with fracture of the cranial vault or temporal bone, particularly with longitudinal fracture of the temporal bone (04). Children seem to be particularly susceptible to developing benign paroxysmal positioning vertigo with concussions. In a retrospective review of 102 patients seen for evaluation of postconcussive dizziness in a pediatric multidisciplinary concussion clinic, benign paroxysmal positioning vertigo was diagnosed in 29% (30/102) of patients with a postconcussion syndrome and dizziness (82). Although benign paroxysmal positioning vertigo is readily treatable, it is often not diagnosed and treated until many weeks after the injury.

Nonspecific dizziness or vertigo is also a feature of the post-concussion syndrome that develops in up to 50% of people with minor head injury without evident clinical or laboratory abnormalities. Headache, neck pain, dizziness, dysequilibrium, and nausea are common manifestations (52; 78). Patients with post-concussive syndromes may also have gaze instability, motion sensitivity, and impaired postural control (19).

The tympanic membrane and external auditory canal are usually normal with inner ear concussion, but there may be blood or CSF in the external or middle ear if there is an associated temporal bone fracture (17; 44). Rarely, there is tympanic membrane perforation, pustular discharge, meningitis, or stapediovestibular dislocation with pneumolabyrinth (60; 09; 54; 25; 64).

Signs of brainstem injury are usually absent, and when present are usually associated with obvious signs of skull fracture or central nervous system damage (59). Central vestibular dysfunction is present in only a minority of cases and may manifest as cogwheel pursuit, incomplete vestibulo-ocular reflex suppression, bidirectional nystagmus, and asymmetric optokinetic nystagmus (52; 17). In some cases, there may be evidence of both central and peripheral vestibular dysfunction (32; 52; 70; 17).

Possible findings of basilar skull fracture include raccoon’s eyes, ecchymosis over the mastoid bone, or blood or CSF behind the tympanic membrane or in the external auditory canal, although the absence of all of these findings does not exclude a basilar skull fracture. Rarely there may be air in the labyrinth visualized on head CT scans (18). Fractures of the petrous temporal bone can cross the internal auditory meatus, damaging both the seventh and eighth cranial nerves, without causing a brainstem injury (33; 70; 75; 16; 73; 44; 18; 45).

Transverse fractures of the temporal bone occur perpendicular to the long axis of the petrous pyramid, creating a cleft from the middle ear space through the bony labyrinth or otic capsule and extending to the foramen magnum (70; 75; 73; 44). Transverse temporal bone fractures most often result from trauma to the occiput but may also occur with frontal trauma (70; 75; 73; 44). Transverse temporal bone fractures severely damage the cochlea or eighth nerve, resulting in complete deafness, severe vertigo, tinnitus, ataxia, nausea, and vomiting (09; 16; 74; Wenno and Spandow 1993; 17; 46). The cochlea is more vulnerable than the vestibular labyrinth; however, tearing of the membranous labyrinth and hemorrhage into the endolymph and perilymph are not uncommon (70). Acute vertiginous symptoms gradually resolve over several weeks, although minor dysequilibrium, nystagmus with fixation removed, and a positive head-thrust test may persist for months or longer, particularly in older individuals. Hemotympanum is common, but rupture of the tympanic membrane and resulting bleeding from the ear are rare (70; 75; 44). In half the cases, the facial nerve is lacerated, and the resulting facial palsy is often permanent (70; 75; 44). Cerebrospinal fluid leaks occur and may drain through the Eustachian tube into the nasopharynx (70; 75).

Conductive hearing loss may resolve over 3 to 6 weeks if there is no ossicular chain disruption (75).

Peripheral vestibular impairment is common among children with protracted dizziness or imbalance after sports-related concussion, and indeed, this is the most common cause of persistent imbalance in this patient group (88). In those with peripheral vestibular dysfunction, semicircular canal dysfunction is more common than dysfunction of the otolith organs. The most frequent clinical abnormality in such children is impaired dynamic visual acuity, whereas hearing loss is unusual (< 10%) (88).

A 37-year-old man presented to an emergency after being hit on the left side of his head with a hammer in an altercation (80). He complained of right-sided (ie, contralateral) hearing loss and subjective tinnitus, without vertigo, that began immediately after the head trauma. Otoscopic examination showed normal tympanic membranes bilaterally. Air conduction was better than bone conduction bilaterally, and Weber’s test lateralized to the left. Pure tone audiograms showed severe sensorineural hearing loss in his right ear, with normal hearing on the left. 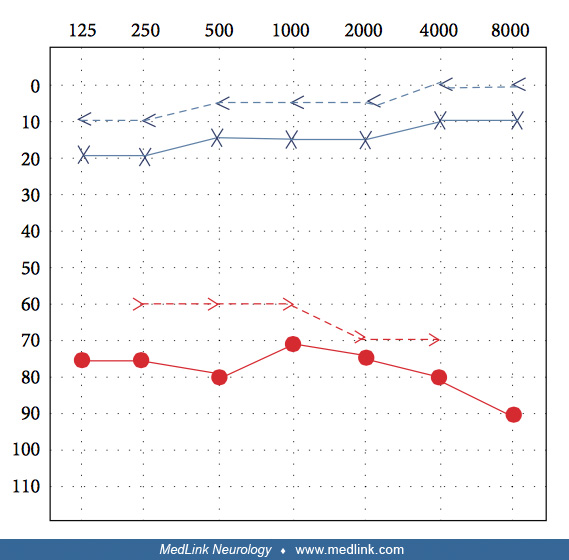 A tympanogram of his right ear showed a normal type A pattern. 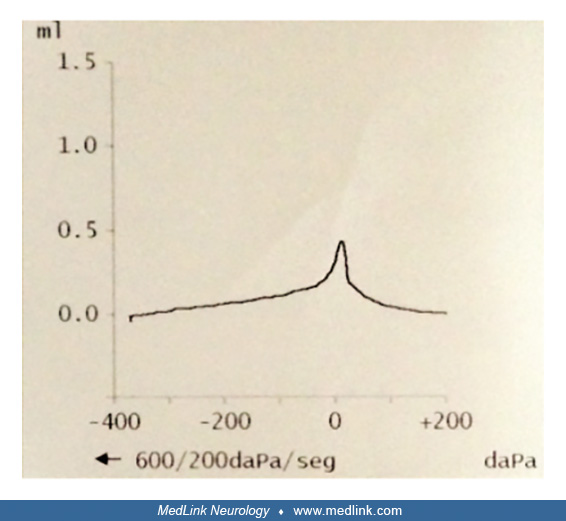 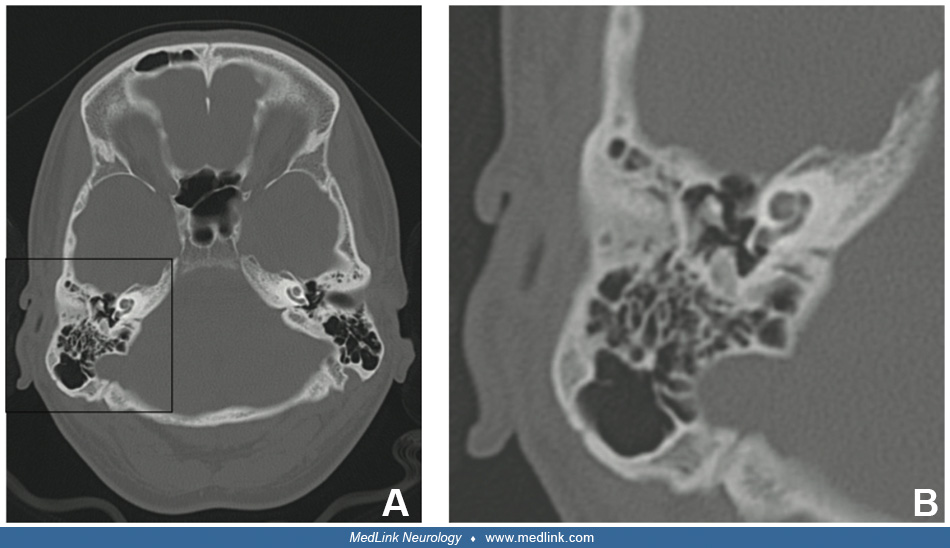 In the absence of vestibular symptoms, vestibular otoneurological tests were omitted. He was treated with oral corticosteroids (deflazacort 1 mg/kg per day, beginning at 70 mg with a slow taper). Deflazacort is an inactive prodrug that is metabolized rapidly to the active drug 21-desacetyldeflazacort with a potency of 70% to 90% that of prednisone; it is not available in the United States. His hearing loss improved by 15 dB in all frequencies within a week, though the role of the oral corticosteroids in this improvement is unclear. 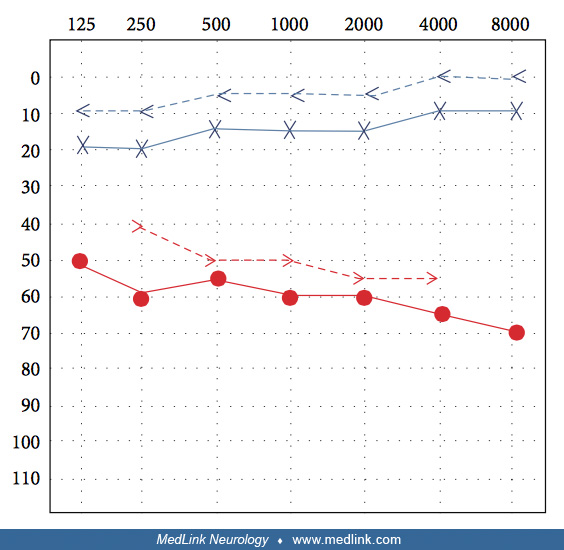 Localization is the inner ear.

Head trauma may damage delicate labyrinthine membranes, particularly with blows to the temporal, occipital, or mastoid regions, with or without associated loss of consciousness (16; 75; 74; 31; 61; 15; 56). Labyrinthine concussion may occur in the ear ipsilateral to a longitudinal temporal bone fracture, in the ear opposite a temporal bone fracture, or in head injury without evidence of skull fracture (75; 50).

Animal experiments found evidence of various degenerative changes in the inner ear, including microscopic and macroscopic hemorrhages in the cochlea and labyrinth, edema, disorganization and disruption of tissues and microvasculature, loss of outer and inner hair cells in the organ of Corti, degeneration of nerve fibers and spiral ganglionic cells, secondary labyrinthitis, fibrosis and ossification, etc. (81; 68; 09; 76; 74; 03; 55). Acceleration and deceleration injury also produces displacement of otoconia from the maculae and impaired postural reflexes (67). In some cases, there was also evidence of degenerative changes in the lateral vestibular nuclei (85).

Some human data support the findings in animal studies, with pathological findings of widespread degeneration of sensorineural elements in the cochlea and labyrinth, as well as chronic inflammatory reaction and osteogenesis in perilymphatic spaces (51). In addition, some have assumed that pressure waves transmitted through the skull to the cochlea produce shear injuries, similar to the situation with severe barotrauma (69; 70; 75; 74).

Clinical, surgical, radiological, and pathological data from more severely affected cases suggest a variety of possible etiologies for posttraumatic vestibular dysfunction, including benign paroxysmal positional vertigo precipitated by labyrinthine concussion or traumatic shearing of otoconia from otolith organs (20; 30; 38; 75; 04; 17; 28; 49; 01; 19), perilymphatic fistulas as a result of oval or round window rupture (22; 29), pneumolabyrinth without temporal bone fracture (50), shock damage to hair cells, and impairment of the velocity storage mechanism (07).

More severe head injury is likely to be associated with cranial fractures, in addition to hemorrhage, edema, and softening of injured areas of the cerebrum, cerebellum, and brainstem. In such cases, hemorrhage and laceration of the eighth cranial nerve is not uncommon (55). Associated loss of consciousness is typical but not universal (55).

Diagnostic tests should be ordered selectively, depending on the clinical manifestations and suspected underlying etiologies. Diagnostic studies that may be helpful in selected patients with posttraumatic vertigo (not attributable to benign paroxysmal positional vertigo) include audiometry, electronystagmography or videonystagmography, bithermal caloric testing, brainstem auditory evoked potentials (23), cervical vestibular-evoked myogenic potentials, and cervical and cranial imaging (eg, with CT or MRI), including CT with bone windows and thin cuts through the temporal bone and middle ear. Hearing loss and ipsilateral canal paresis strongly support peripheral vestibular dysfunction (63).

Vertigo (especially acute persistent vertigo) may be alleviated with vestibular sedatives (47). Some types of vertigo may also be amenable to specific curative therapies, most notably with canalith repositioning maneuvers for benign paroxysmal positioning vertigo (08; 49).

Surgical procedures are rarely required (33; 70; 87; 72), but microsurgical otological procedures may be helpful in some cases of perilymphatic fistula, CSF otorrhea with or without meningitis, persistent compression of the eighth cranial nerve, or conductive hearing loss from disruption of the ossicular chain (60; 40; 41; 87; 25; 35).

Cochlear implantation can be effective for patients with profound sensorineural hearing loss due to cochlear trauma but who still have an intact auditory nerve (77; 15).