By definition, lobar intracerebral hemorrhages occur either within the subcortical white matter or at the junction of the hemispheric gray-white matter. 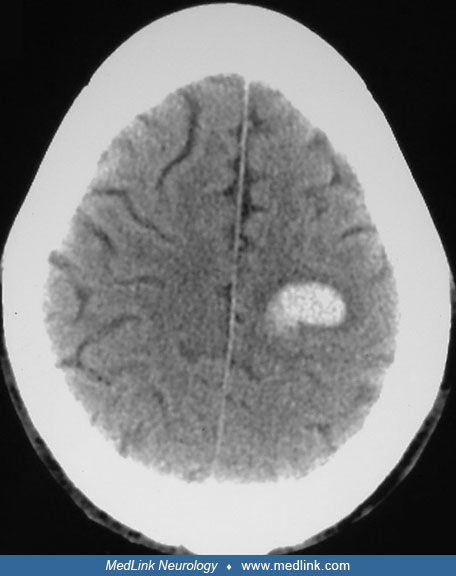 Lobar intracerebral hemorrhages occur most commonly in the temporoparietal-occipital region.

As such, clinical findings may not always include a marked hemiparesis (64), although mild weakness is often present. Other findings include neglect syndromes, agnosias, apraxias, visual field abnormalities, and behavioral changes. Sensory findings, if present, may be difficult to elicit due to lack of patient cooperation and a superimposed neglect syndrome. Bleeds involving the dominant temporal lobe may produce a fluent aphasia with paraphasic errors. More anteriorly located intracerebral hemorrhages (in the dominant hemisphere) produce motor findings and a nonfluent aphasia (51). Smaller intracerebral hemorrhages typically produce less dramatic findings. Due to their location at the junction of the gray-white matter, lobar intracerebral hemorrhages often extend in an anterior-posterior axis.

Several serial imaging studies have consistently demonstrated that enlargement of hematoma size due to active bleeding is a major cause of clinical deterioration within the first 3 hours after the onset of hemorrhage (17). A study observed that the volumes of lobar hemorrhage increased more than 2- or 3-fold in the patients with microbleeds (55). Moreover, the presence of microbleeds was an independent risk factor for a large-sized hemorrhage. White matter changes are frequent in lobar hemorrhage. These white matter abnormalities may be associated with cortical microbleeds, the radiological hallmark of cerebral amyloid angiopathy.

A study found that 77% of all hemorrhages related to tissue plasminogen activator administration for acute myocardial infarction had a lobar location. Such hemorrhages were likely to be large (median volume 72 mL) and have a blood-fluid level (82%), but with little edema (median 9 mL) (36). In 60% of such cases with pathologic examination, underlying cerebral amyloid angiopathy was found (97). These hemorrhages are often large, can expand, and may be multiple. The mortality in such cases can be up to 66%. Risk factors for such bleeds include advanced age, concomitant hypertension, use of anticoagulants, and preexisting dementia. Thrombolytics used to treat an acute ischemic stroke can cause intracerebral hemorrhages, some in a lobar location. Among patients treated with thrombolysis for acute stroke, severe leukoaraiosis of the deep white matter is an independent risk factor for symptomatic intracerebral hemorrhage (75). There is increasing evidence that cerebral amyloid angiopathy, which itself can cause hemorrhage, may be a risk factor for thrombolysis-related intracerebral hemorrhage. However, the presence of cerebral microbleeds on gradient echo imaging does not appear to substantially increase the risk of either symptomatic or asymptomatic brain hemorrhage following IV tPA administered between 3 and 6 hours after stroke onset (50).

Obstructive hydrocephalus can occur if a large lobar intracerebral hemorrhage compresses or obstructs the foramen of Munro or cerebral aqueduct. Another complication, which was not fully appreciated until a few years ago, is expansion of the clot that evolves over several hours after the initial bleed. Lobar intracerebral hemorrhages may produce seizures due to their close proximity to the cortex.

A 77-year-old white female presented with acute onset of confusion and left-sided weakness. She had a history of progressive memory loss over the past 3 to 4 years, but no history of hypertension or vascular disease. Her only medications were an occasional ibuprofen for arthritis and conjugated estrogen. On examination, her vital signs were normal. No carotid or cardiac abnormalities were noted. Neurologic exam showed her to be alert, but not fully oriented. Speech was fluent. Short-term memory was one third after 3 minutes. She did not know who the president was, nor could she do complex calculations. Moderate finger-hand apraxia was noted. She had profound left-sided neglect with some denial of her deficits. There was a left visual field homonomous hemianopsia. Slight dysarthria was noted, along with a mild left hemiparesis. Gait and cerebellar functions were normal. Reflexes were increased on the left, and a left Babinski sign was present. Several frontal-release reflexes were present. A head CT showed a moderately sized right parietal hemorrhage at the gray-white junction. Some cortical atrophy was noted.

The patient made a recovery with supportive care. She was instructed to stop taking ibuprofen and use acetaminophen for routine pain control. Three months after her presentation, her examination was nearly normal, except for minimal left-sided weakness. She still exhibited cognitive dysfunction with poor orientation and memory. Detailed neuropsychological testing showed evidence of diffuse cognitive deficits consistent with a degenerative dementia such as Alzheimer disease.

Up to 20% of lobar intracerebral hemorrhages may be due to coagulopathies of some type, including the use of warfarin (51). In many cases of lobar hemorrhages associated with warfarin use, cerebral amyloid angiopathy is found on pathologic examination (93). Other acquired coagulopathies, particularly due to the expanding use of thrombolytic agents, are increasingly recognized causes of lobar hemorrhage. The use of tPA for acute myocardial infarction or stroke is an increasingly common etiology for such hemorrhages (97).

Lobar hemorrhages due to cocaine, amphetamine, or phenylpropanolamine use may be secondary to sudden elevation in blood pressure, multifocal cerebral vessel spasm, or drug-induced vasculitis.

Lobar intracerebral hemorrhage is not an uncommon presentation in cases of previously unsuspected brain tumor. Hemorrhage is more likely with certain types of tumors, including glioblastoma, hemangioblastoma, oligodendroglioma, and metastatic tumors. Metastatic tumors with a high propensity to hemorrhage are choriocarcinoma, malignant melanoma, renal cell, prostate, and lung cancer.

Improved and more aggressive treatment of hypertension is generally accepted as the main reason for the declines in the incidence and mortality of intracerebral hemorrhage during the past 20 to 30 years (60). More careful use of anticoagulants and thrombolytic therapy may also help lessen the risk of lobar intracerebral hemorrhages. The predominant predictors of clinically significant intracerebral hemorrhage in patients treated with recombinant tissue plasminogen activator include age, clinical stroke severity as assessed by the NIH stroke scale score on admission, high blood pressure, hyperglycemia, early CT changes, large baseline diffusion lesion volume, and leukoaraiosis on MRI. In order to minimize the risk of recombinant tissue plasminogen activator-related symptomatic intracerebral hemorrhage, careful attention must be given to the pre-therapeutic blood sugar level, and a strict protocol for the control of elevated blood pressure is needed during the first 24 hours (27). Patients with lobar hemorrhage and cerebral amyloid angiopathy remain at higher risk for anticoagulant-related intracerebral hemorrhage recurrence than thromboembolic events, and therefore would be best managed without anticoagulants. This recommendation is not applicable for patients with deep hemispheric hemorrhage and for patients with a high risk of ischemic stroke (like in atrial fibrillation) (79).

Patients younger than 45 years of age, patients without hypertension, and patients with lobar hemorrhage and signs of clinical deterioration should be thoroughly investigated to disclose a potential arteriovenous malformation or an aneurysm. There are no specific clinical features of cerebral amyloid angiopathy-related primary intracerebral hemorrhage, although lobar, recurrent or multiple simultaneous hemorrhages in older patients should raise suspicion of its diagnosis. White matter damage in lobar intracerebral hemorrhage is common and is associated with cognitive impairment. Lobar intracerebral hemorrhage has several causes. The differential diagnoses should include disorders not mentioned in the section on etiology: hemorrhagic transformation of an ischemic stroke, abscess or other infectious lesions, trauma, and venous thrombosis. Drugs such as sympathomimetic drugs (including cocaine and amphetamines) can cause or be associated with an intracerebral hemorrhage.

However, a study using susceptibility-weighted MRI found it to be sensitive for detecting hemorrhages within 5 hours of onset (80). A contrast-enhanced CT or MRI is useful for detecting vascular changes suggestive of an arteriovenous malformation or a tumor. An arteriogram is sometimes performed for similar reasons. One study reported that gradient-echo MRI can detect petechial hemorrhages in the cortex and subcortex of more than 50% of patients with lobar hemorrhages (38). Follow-up MRI showed recurrent hemorrhages in 38% of patients (39).

MRI must be performed in order to exclude any vascular malformation or neoplasms, and, in young patients, a cerebral angiography must be done in order to exclude small arteriovenous or dural malformations (61). It has been demonstrated that there is a progressive increase in white matter lesions in subjects with cerebral amyloid angiopathy (23). In this particular study, new hemorrhages, including asymptomatic microbleeds, were seen in 46% of subjects. The association of white matter lesions with lobar hemorrhages suggests that white matter damage may reflect a progressive microangiopathy due to cerebral amyloid angiopathy. 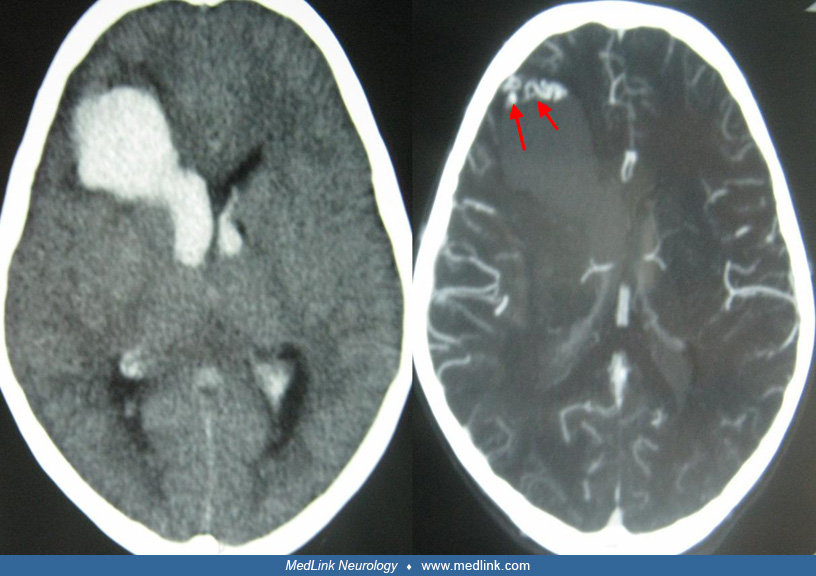 Histological examination of brain tissue obtained during surgery or at autopsy is necessary for the definitive diagnosis of cerebral amyloid angiopathy. Rarely, a brain biopsy is done to evaluate for the presence of vasculitis or tumor. Coagulation studies are usually performed to exclude a coagulopathy.

When warfarin-related intracerebral hemorrhage occurs, immediate discontinuation of warfarin with rapid warfarin reversal remains the first-line intervention, often with neurosurgical intervention. The optimal agent for rapid warfarin anticoagulation reversal remains to be defined owing to the lack of prospective randomized trials (35). Anticoagulation should be urgently reversed either with prothrombin complex concentrates, recombinant factor VIIa, recombinant factor VIIa along with fresh-frozen plasma and prothrombin complex concentrates or fresh frozen plasma only (01). Warfarin-related intracerebral hemorrhage requires adequate transfusion of fresh-frozen plasma (10 to 20 mL/kg). For thrombolysis-related intracerebral hemorrhages, 6 units of cryoprecipitate (rich in fibrinogen) are generally recommended to increase the fibrinogen level to at least 150 mg/dL. Platelet concentrate may also be needed if massive transfusion is necessary. Prothrombin complex concentrate is an alternative, but issues of availability make its use impractical. The use of recombinant factor VIIa is a newer option (101). Early intervention focuses on rapid correction of coagulopathy in order to prevent continued bleeding. Warfarin therapy may be resumed within 3 to 10 days of intracerebral hemorrhage in stable patients in whom subsequent anticoagulation is mandatory (01).

The issue of surgical management has been reviewed in guideline publications. The Surgical Treatment for Intracerebral Hemorrhage (STICH) trial demonstrated no overall benefit from early surgery when compared with initial conservative treatment. Cases of very large hematomas tend to do poorly with either surgical or medical therapy. Cases of moderate-sized hematomas that enlarge and cause clinical worsening may be most amenable to surgical removal, particularly if the bleed is superficial. Superficial lobar intracerebral hemorrhages may be treated by open surgical evacuation (clot reaches to within 1 cm of the cortical surface). Deeper intracerebral hemorrhages may be treated with minimally invasive surgical techniques and decompressive craniectomy (15; 72). Emergency surgery in deteriorating patients with large anticoagulation-associated intracerebral hemorrhage has been found beneficial despite the presence of clinical and radiological signs of herniation before the evacuation (85). Several studies have evaluated stereotactic removal of hematomas, either with or without the use of local thrombolytics to enhance clot removal. Stereotactic infusion of urokinase into the clot cavity reduces the clot burden and risk of death, but rebleeding is common and functional outcome is not improved (15). Endoscopic hematoma evacuation provided the quick, adequate decompression of intracerebral hemorrhage. The outcomes were better than the CT-guided hematoma removal. The STICH II trial suggested that early surgery might have a small survival benefit for patients with superficial lobar intracerebral hemorrhage. In this study, 307 of 601 patients were randomly assigned to early surgery, and 294 were assigned to receive initial conservative treatment. All patients were followed up with at 6 months. Finally, 297 and 286 were included in the analysis, respectively. It was observed that 174 (59%) patients in the early surgery group had an unfavorable outcome versus 178 (62%) patients in the initial conservative treatment group (absolute difference 3 to 7%) (71).

There has been concern that operating on lobar intracerebral hemorrhages due to amyloid angiopathy might lead to further bleeding and a poor outcome. One study of 37 such patients found that 54% had a good outcome following surgery (47). Parietal hematoma location, advanced age (75 years of age or older), and intraventricular blood were associated with a worse prognosis. Only 5% of cases required repeat surgery for bleeding. Therefore, the suspicion that a lobar intracerebral hemorrhage may be due to amyloid angiopathy is not, by itself, a contraindication for surgical intervention.

Statins should be avoided in patients with a history of intracerebral hemorrhage, particularly in those cases with a lobar location (118).