Headache associated with exercise or exertion has been noted as early as classical Greece, when Hippocrates wrote “one should be able to recognize those who have headaches from gymnastic exercises, or running, or walking or hunting, or any other unseasonable labour, or from immoderate venery…” (02).

The first description in modern medicine was in 1932 by Tinel who presented 4 patients with intermittent, paroxysmal headaches following exertion and surmised the cause was distention of the intracranial veins due to increased intrathoracic pressure (41). Symonds’s observations differentiated this further and described headaches induced by Valsalva-like maneuvers and not exertion (40), now classified as primary cough headache (18).

Jokl self-described “an attack of nausea, headache, prolonged weakness and vomiting” brought on after running that lasted 15 minutes (21).

He later noted several profound cases of “effort migraine” during the Olympic Games in Mexico City (22). He described high altitude heat, humidity, and perhaps lack of training as predisposing factors. These headaches tended to occur with prolonged running rather than sprints. These highly conditioned athletes developed scotomata, unilateral retro-orbital pain, nausea and vomiting, and, in some cases, a striking prostration. These descriptions are more in keeping with migraine triggered by exertion.

The first large published series on exertion-induced headache or head pain related to exertion came from the Mayo Clinic (36). The cohort included 103 patients with headache precipitated by running, bending over, coughing, sneezing, straining, or by heavy lifting. Of their cohort, 90% were diagnosed with “benign exertional headache unassociated with intracranial lesions”; however, the phenotype was not differentiated by either precipitation with sudden Valsalva maneuvers or sustained exertion/exercise.

The ICHD-3 diagnostic criteria for primary exercise headache is detailed in Table 1.

Most patients report onset of headache within 30 minutes of cessation of exercise (34; 42). The headache durations can range from minutes to less than 1 day (15; 34; 42). Adolescents may report a shorter headache duration, with most respondents reporting attacks up to 4 hours (04). A more prolonged form of exercise-induced headache has been reported. Attacks can last more than a day, with the longest reported attacks lasting up to 2 days (34).

Most patients report a pulsating headache; however, the nature of the pain can be described as aching, pounding, or throbbing (04; 42). The headache can be either bilateral or unilateral. More recent studies report a higher incidence of bilateral headache (van der Ende-Kastelijin et al 2012; 15; 34; 42). The frontal region is the most frequently reported location of the headache (04; 34; 42). Pain intensity is variable.

The prognosis for patients with primary exercise headache is good. Spontaneous resolution has been reported by patients after months to several years (36; 38; Sjaastad and Bakketeig 2003; 15). In the cohort reported by Rooke, approximately one third of patients with primary exercise headache will experience spontaneous resolution within 5 years of onset and approximately 80% will have spontaneous remission after 10 years of onset (36). The most recent cohort described by Hanashiro and colleagues found almost all patients had resolution within their 1-year follow-up from diagnosis.

Case 1. A 35-year-old man with no other relevant clinical antecedents related a history of headaches since his teens. These headaches met criteria for migraine without aura. They occurred about 4 times every year. In the past, the headaches had resolved well with sodium naproxen. Several years earlier, he had 1 migraine-like headache during an orgasm, which was not investigated.

He described a 2-month history of headaches triggered by jogging sessions. He stated that he began to feel a bitemporal pounding or throbbing headache, usually around the peak of his exercise. It was associated with photophobia, noise sensitivity, and nausea. Each headache began as a subtle temporal ache but increased rapidly; in about 10 to15 minutes it became moderate to severe and obliged him to stop exercising. He would then notice immediate relief, usually with total headache disappearance if he remained still. A few times, however, the pounding headaches lasted for 12 to 24 hours, eventually becoming duller and then resolving. He denied any focal neurologic symptoms. General and neurologic examinations, as well as brain CT and MRI, were unremarkable. Propranolol, 20 mg every 8 hours, was prescribed, and he had complete resolution of his exercise-induced headaches.

Case 2. A 62-year-old female presented with a 4-year history of headache on 28 out of 30 days a month. The headaches were always associated with strenuous exercise and would occur within 15 minutes of exercise cessation.

The pain was in the left facial, temporal regions with pain involvement bilaterally at the throat, neck, shoulder, and upper and lower teeth. The pain typically lasts for 20 minutes with a range of 2 to 60 minutes. The headache was not associated with aura symptoms, migrainous features, or cranial autonomic symptoms. She did not report premonitory-like or postdromal symptoms.

Paracetamol was not effective in treating the headache.

The headache was not associated with cough nor sexual activity.

As a teen she had headaches which would be consistent with migraine with visual aura. There was family history of migraine in her mother.

The neurology exam was unremarkable. The brain MRI, neck MRI, intracranial and extracranial MRA were normal. She was assessed by cardiology and she did not have significant coronary artery disease.

A number of theories have been proposed to explain headache associated with exertion but objective data is lacking in most cases and the pathophysiology of primary exercise headache remains unclear (14).

Powell proposed strain or stretch of the cervical ligaments and tendons with development of excessive muscle contraction as an explanation for individuals who complain of headache associated with weightlifting (33).

Heckmann and colleagues observed abnormal cerebrovascular autoregulation via stress transcranial Doppler in 1 patient with exercise-induced headache (19). They observed a marked elevation in blood flow velocity with minimal changes in calculated resistance, which they suggested indicates an abnormal vascular myogenic response.

Cerebral arterial vasospasm has been observed in 1 patient with both primary headache associated with sexual activity and primary exercise headache (37).

Primary exercise headache has been proposed to be a venous disorder (10). The prevalence of jugular valve incompetence leading to transient increase of intracranial pressure during exertion has been shown to be much higher (70%) in patients with primary exercise headache when compared with controls (20%), suggesting that intracranial venous congestion caused by retrograde jugular venous flow may play a role (09). The prevalence of cerebral venous stenosis has been shown to be increased in patients with exercise-induced headaches in a study that included patients with cough, exercise, and sexual headaches, as compared to controls (11).

Rasmussen and Olesen have assessed the lifetime prevalence of headache disorders in a cross-sectional epidemiologic survey of a representative 25- to 64-year-old general population (35). They found a lifetime prevalence of 1% for “benign exertional headache”. In an epidemiological survey in Norway involving 1838 participants, 12.3% referred to exercise headache (38; Sjaastad and Bakketeig 2003); in a survey of 1963 adolescents between the ages of 13 and 15 in Taiwan, the prevalence of exercise headache was as high as 30.4% (04). A cluster sampled cross-sectional study of the population of Tehran in 2079 individuals reported a prevalence of 7.3% (34) and a study of 300 male conscripts between the ages of 18 to 26 reported a prevalence of 12.7% (42).

Two studies have shown a high rate of comorbidity with migraine (04; 15).

A survey of 4000 competitive cyclists revealed a prevalence of 26% (43), suggesting its burden in athletes may be underestimated.

When exercise headache is diagnosed, patients can limit their exercise. Improved overall physical conditioning and a warm-up period before exercise may help to prevent exercise-induced headaches (23).

A comorbid diagnosis of migraine is found between one third to two thirds of patients with primary exercise headache (04; 15).

Approximately one third and 17% of patients with primary exercise headache also have a diagnosis of primary headache associated with sexual activity and primary cough headache, respectively. This observation may be due to shared pathophysiology. Cerebral venous stenosis was observed patients with either primary cough, primary exercise, or primary headache associated with sexual activity (11). However, the pathogeneses of these disorders remain unclear.

An adequate history will usually reveal the diagnosis of primary exercise headache, but patients with mass lesions, structural malformations, and vascular malformations can also have headaches with exertion. About one third of cases of headaches precipitated by exercise are secondary to an underlying pathology (32). Pheochromocytoma, arterial dissection, hypoplasia of the aortic arch after successful coarctation repair, elongated styloid process, and fusiform aneurysms of the vertebral artery, although rare, have been reported as responsible for exercise-induced headache (05; 26; 28). Rarely, exercise headache is a symptom of middle cerebral artery dissection (01). The diagnosis of primary exercise headache can be made only after a thorough examination to rule out intracranial disease or structural malformation.

Cardiac cephalalgia. Rarely, patients with arteriosclerotic coronary artery disease may have exercise-induced headaches that begin with exertion and are relieved by rest. This syndrome was first described in 1997 (25) and to date 35 cases of cardiac cephalalgia have been reported; these were reviewed in 2017 (44). 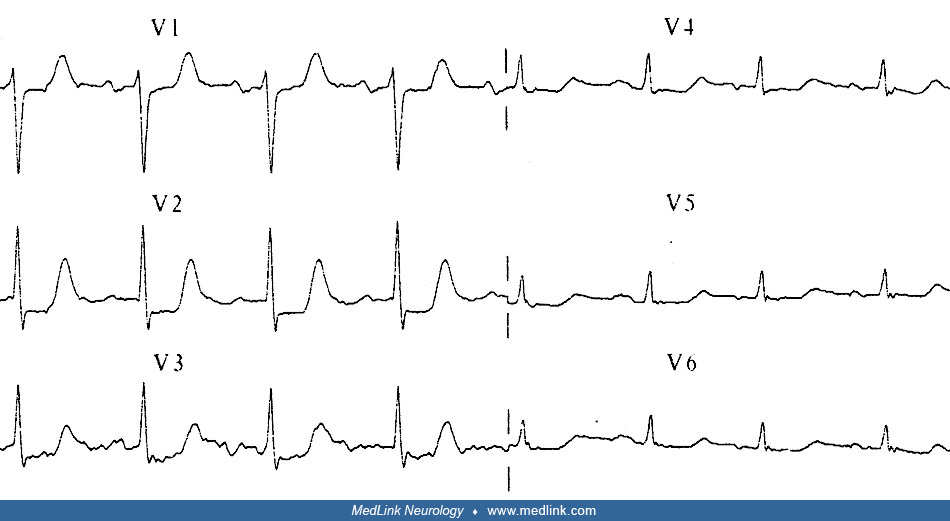 Patients that present with this headache often report symptoms of cardiac ischemia such as chest pain and dyspnea; however, absence of these symptoms does not exclude the diagnosis.

This headache is most often a severe bilateral occipital headache with associated nausea in a third of cases (44). Photophobia and phonophobia would be unexpected associated features and each of the symptoms has been reported once in the 35 case reports of cardiac cephalalgia (44).

The International Headache Society defines cardiac cephalalgia as headache usually, but not always, aggravated by exercise, occurring during an episode of myocardial ischemia and relieved by nitroglycerine (18).

Management of the underlying coronary disease with percutaneous intervention or coronary bypass surgery results in resolution of headaches (45).

Failure to recognize and correctly diagnose cardiac cephalalgia can have serious consequences. Distinguishing this disorder from migraine without aura is crucial, particularly because vasoconstrictor medications (eg, triptans or ergots) are indicated for the treatment of an acute migraine attack but contraindicated for patients with cardiovascular disease (08).

Because both benign and malignant forms of headache are associated with exercise.

About one third of cases of headache precipitated by exercise are secondary to an underlying pathology and include primary brain tumor, metastatic disease, subarachnoid hemorrhage, and unruptured aneurysms (32).

Therefore, an MRI examination is usually required to evaluate patients with exercise headache. If an aneurysm is suspected, or if there is doubt, further neurologic studies are indicated, particularly lumbar puncture, CT scan of the head, MRA, or CT angiogram.

Moderation of exercise or activity is maybe all that is required. A warmup period before strenuous exercise has been recommended (23).

Prophylactic use of indomethacin in doses varying from 25 to 150 mg a day has been recommended for more prolonged exercise headaches (07; 27). Daily indomethacin in varying doses between 25 mg to 150 mg has been reported to completely control exercise-induced headaches (06). The history taking should include exercise frequency prior to introducing indomethacin. In patients who exercise frequently, regular administration of a proton pump inhibitor should be considered to prevent gastric side effects of indomethacin.

Ergotamine or methysergide (no longer available) taken 30 minutes prior to exercise as a preventive has been recommended (32; 24).

Only rarely have migraine preventive drugs such as propranolol or flunarizine been indicated in the treatment of exercise-induced headaches (32; 31).

Over 80% of patients will respond to indomethacin, with response within 1 to 4 weeks of initiation (06).

The maximum required treatment period with propranolol has been reported to be 6 months (31).

The onset of an exertion-related headache in pregnancy is a red flag and should prompt a detailed evaluation with history, examination, and investigation for a secondary cause.

This diagnosis does not preclude anesthesia as indicated or necessary. No additional precautions need to be undertaken for anesthesia in patients with a diagnosis of primary exercise headache.