Restless sleep disorder is a new pediatric sleep disorder characterized by frequent body movements during sleep and daytime impairment. Since its characterization, potential pathophysiologic mechanisms have been identified, particularly the association with iron deficiency. Alteration in cyclic alternating pattern and heart rate variability brings to light some of the possible contributing mechanisms. Treatment with oral or intravenous iron supplementation has been highly effective. Comorbid parasomnias or other disorders can further contribute to sleep disruption and daytime symptoms.

Sleep medicine is a medical specialty dedicated to identifying, diagnosing, and treating sleep disorders (34). It is well established that sleep is essential for healthy development, growth, cognition, and emotional regulation, among other important areas of health in children and adults (22). Decades of research have demonstrated the importance of an appropriate amount of sleep. In fact, the American Academy of Sleep Medicine has published an expert consensus position statement that details the number of hours that children of various ages should sleep to avoid consequences of sleep deprivation, which include excessive daytime sleepiness, hyperactivity, and attention deficit (31; 29). Although the recommended total amount of sleep has been determined, assessment of sleep quality has not been equally studied. Sleep interruption can potentially affect sleep quality in a similar manner as sleep deprivation.

Since then, advances in the literature have demonstrated the presence of restless sleep disorder in other groups, including children with attention deficit hyperactivity disorder (23) and children with parasomnia (33).

The most characteristic symptom of restless sleep disorder is frequent movements during sleep. 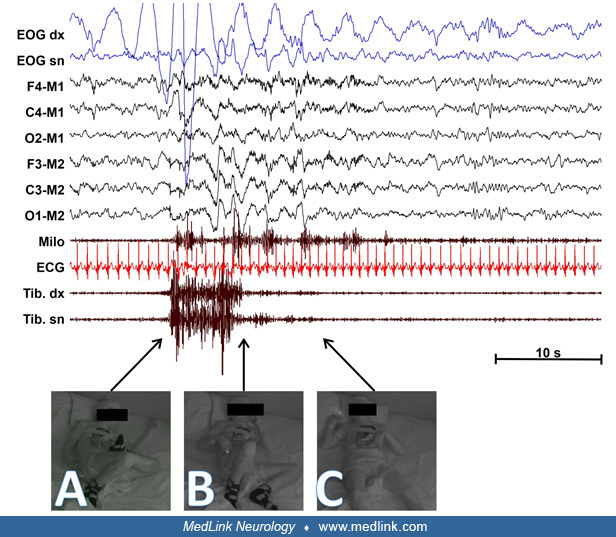 Parents usually describe these movements in various forms, for example, “moves like a helicopter,” “sleeps like a fish,” or “fights in his sleep.” In some cases, children have fallen out of bed and ended up sleeping on a mattress on the floor. These descriptions by the parents have been corroborated by video polysomnography analysis. In fact, in the very first restless sleep disorder descriptive study, video polysomnographic characterization of restless sleep disorder demonstrated that these children move through the night at a rate of approximately five large body movements or repositionings per hour (10). Restless sleep disorder is also a chronic disorder occurring at least three times a week and for at least 3 months. The chronicity of restless sleep disorder is an important consideration, particularly because restless sleep has also been associated with other disorders, and it is important to rule out temporary causes, such as eczema exacerbation, infection, or effect of the surrounding environment (eg, temperature). Parents are also concerned about daytime symptoms because children with restless sleep disorder can present with poor academic performance, excessive daytime sleepiness, behavioral problems, mood disorders, or difficulty with attention or hyperactivity (06).

Table 1. Diagnostic Criteria for Restless Sleep Disorder (A to H must be met)

Although the pathophysiology of restless sleep disorder is unknown, current research points towards iron deficiency as a main contributing mechanism. Other important findings that help elucidate the underlying mechanism include changes in cyclic alternating pattern and heart rate variability.

Restless legs syndrome can be easily differentiated in children who can express in their own words the urge to move the legs and the improvement in symptoms with the movement of the legs. The other two key diagnostic features of restless legs syndrome include worsening of symptoms in the evening and during periods of rest.

Sleep-related rhythmic movement disorders are repetitive, rhythmic movements that usually start early in infancy and rarely persist in children older than 5 years of age. These movements are quite typical and hard to miss. For example, the child rolls back and forth or bangs his head against the pillow repetitively. The movements are also more common during periods of sleep-wake transition and are postulated to be associated with self-soothing mechanisms prior to sleep (07).

Bruxism is another sleep-related movement disorder equally difficult to miss. The hallmark of bruxism is teeth grinding. A characteristic “grinding” sound is often heard.

Nocturnal epilepsy can present with dystonia, stereotypical movements, and myoclonic movements. These movements occur during the seizure and can be correlated with electroencephalographic findings. Although seizures can occur several times a night, they are usually rare during REM sleep (35).

Children with restless sleep disorder move through the night and in every sleep stage, including REM sleep, with an index of at least five movements per hour. Children with restless sleep disorder do not have leg movements characteristic of periodic leg movement disorder, and the prevalence of comorbid bruxism in other sleep-related movement disorders has not been studied.

Iron deficiency is the only disorder that has been associated with restless sleep disorder. 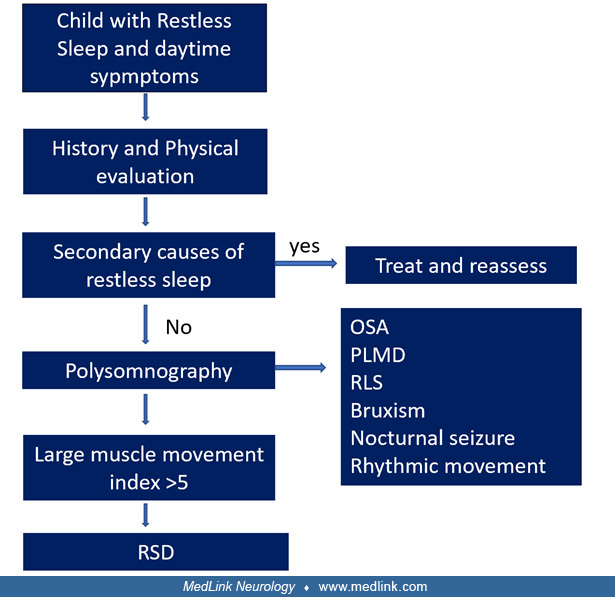 The evaluation of restless sleep in children should start with a complete medical and sleep history and physical examination. Often conditions or medications that can contribute to restless sleep can be identified at this step, and appropriate measures to improve the disorder can be prescribed. A clear example is eczema. A skin evaluation can identify the typical lesions, and treatment recommendations can be prescribed. Follow-up should be established to ensure improvement in sleep after treatment of a primary medical, psychiatric, or sleep disorder. If a primary cause is not identified, a sleep study or polysomnogram should be ordered. At this stage, other sleep disorders can be identified, such as obstructive sleep apnea and periodic limb movement disorder. Large body movement index can be identified in polysomnography, and the International Restless Legs Study Group criteria should be used to score large muscle group movements (18). A large muscle group movement index of five or more is diagnostic of restless sleep disorder.

Iron supplementation is the main treatment option for children with restless sleep disorder. Children with ferritin levels lower than 50 ng/dl are recommended to start oral iron supplementation in the form of ferrous sulfate 325 mg tablet or liquid given from 1 to 3 mg/kg/day for at least 3 months. Some considerations to side effects of oral iron supplementation include constipation and teeth staining (14). Children who can not take oral iron and those who experienced significant side effects or were not compliant with oral iron would be good candidates for intravenous iron administration. Ferric carboxymaltose in a single dose of 15 mg/kg if weighing less than 50 kg or 750 mg if weighing over 50 kg has shown significant improvement in iron levels and symptoms. When comparing both groups, it was found that serum ferritin increased with both oral and intravenous iron, and symptoms improved in both groups, but intravenous iron showed more improvement in ferritin and symptoms (12).