For centuries, scientists and philosophers have been fascinated by the brain, but until recently they viewed the brain as nearly incomprehensible. Now, however, the brain is beginning to relinquish its secrets. Scientists have learned more about the brain in the last 10 years than in all previous centuries because of the accelerating pace of research in neurological and behavioral science and the development of new research techniques. As a result, Congress named the 1990s the Decade of the Brain. At the forefront of research on the brain and other elements of the nervous system is the National Institute of Neurological Disorders and Stroke (NINDS), which conducts and supports scientific studies in the United States and around the world.

This fact sheet is a basic introduction to the human brain. It may help you understand how the healthy brain works, how to keep it healthy, and what happens when the brain is diseased or dysfunctional.

The architecture of the brain 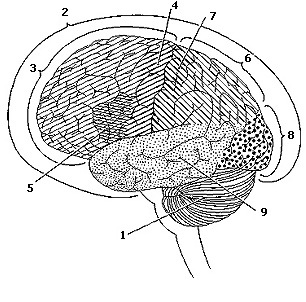 The brain is like a committee of experts. All the parts of the brain work together, but each part has its own special properties. The brain can be divided into three basic units: the forebrain, the midbrain, and the hindbrain.

The hindbrain includes the upper part of the spinal cord, the brain stem, and a wrinkled ball of tissue called the cerebellum (1). The hindbrain controls the body’s vital functions such as respiration and heart rate. The cerebellum coordinates movement and is involved in learned rote movements. When you play the piano or hit a tennis ball you are activating the cerebellum.

The uppermost part of the brainstem is the midbrain, which controls some reflex actions and is part of the circuit involved in the control of eye movements and other voluntary movements. The forebrain is the largest and most highly developed part of the human brain: it consists primarily of the cerebrum (2) and the structures hidden beneath it (see "The Inner Brain").

When people see pictures of the brain it is usually the cerebrum that they notice. The cerebrum sits at the topmost part of the brain and is the source of intellectual activities. It holds your memories, allows you to plan, enables you to imagine and think. It allows you to recognize friends, read books, and play games.

The cerebrum is split into two halves (hemispheres) by a deep fissure. Despite the split, the two cerebral hemispheres communicate with each other through a thick tract of nerve fibers that lies at the base of this fissure. Although the two hemispheres seem to be mirror images of each other, they are different. For instance, the ability to form words seems to lie primarily in the left hemisphere, while the right hemisphere seems to control many abstract reasoning skills.

The geography of thought
Each cerebral hemisphere can be divided into sections, or lobes, each of which specializes in different functions. To understand each lobe and its specialty we will take a tour of the cerebral hemispheres, starting with the two frontal lobes (3), which lie directly behind the forehead. When you plan a schedule, imagine the future, or use reasoned arguments, these two lobes do much of the work. One of the ways the frontal lobes seem to do these things is by acting as short-term storage sites, allowing one idea to be kept in mind while other ideas are considered. In the rearmost portion of each frontal lobe is a motor area (4), which helps control voluntary movement. A nearby place on the left frontal lobe called Broca’s area (5) allows thoughts to be transformed into words.

When you enjoy a good meal—the taste, aroma, and texture of the food—two sections behind the frontal lobes called the parietal lobes (6) are at work. The forward parts of these lobes, just behind the motor areas, are the primary sensory areas (7). These areas receive information about temperature, taste, touch, and movement from the rest of the body. Reading and arithmetic are also functions in the repertoire of each parietal lobe.

As you look at the words and pictures on this page, two areas at the back of the brain are at work. These lobes, called the occipital lobes (8), process images from the eyes and link that information with images stored in memory. Damage to the occipital lobes can cause blindness.

The last lobes on our tour of the cerebral hemispheres are the temporal lobes (9), which lie in front of the visual areas and nest under the parietal and frontal lobes. Whether you appreciate symphonies or rock music, your brain responds through the activity of these lobes. At the top of each temporal lobe is an area responsible for receiving information from the ears. The underside of each temporal lobe plays a crucial role in forming and retrieving memories, including those associated with music. Other parts of this lobe seem to integrate memories and sensations of taste, sound, sight, and touch.

The cerebral cortex
Coating the surface of the cerebrum and the cerebellum is a vital layer of tissue the thickness of a stack of two or three dimes. It is called the cortex, from the Latin word for bark. Most of the actual information processing in the brain takes place in the cerebral cortex. When people talk about "gray matter" in the brain they are talking about this thin rind. The cortex is gray because nerves in this area lack the insulation that makes most other parts of the brain appear to be white. The folds in the brain add to its surface area and therefore increase the amount of gray matter and the quantity of information that can be processed.

The inner brain
Deep within the brain, hidden from view, lie structures that are the gatekeepers between the spinal cord and the cerebral hemispheres. These structures not only determine our emotional state, they also modify our perceptions and responses depending on that state, and allow us to initiate movements that you make without thinking about them. Like the lobes in the cerebral hemispheres, the structures described below come in pairs: each is duplicated in the opposite half of the brain.

The hypothalamus (10), about the size of a pearl, directs a multitude of important functions. It wakes you up in the morning, and gets the adrenaline flowing during a test or job interview. The hypothalamus is also an important emotional center, controlling the molecules that make you feel exhilarated, angry, or unhappy. Near the hypothalamus lies the thalamus (11), a major clearinghouse for information going to and from the spinal cord and the cerebrum.

An arching tract of nerve cells leads from the hypothalamus and the thalamus to the hippocampus (12). This tiny nub acts as a memory indexer—sending memories out to the appropriate part of the cerebral hemisphere for long-term storage and retrieving them when necessary.

The basal ganglia (not shown) are clusters of nerve cells surrounding the thalamus. They are responsible for initiating and integrating movements. Parkinson’s disease, which results in tremors, rigidity, and a stiff, shuffling walk, is a disease of nerve cells that lead into the basal ganglia.

Making connections
The brain and the rest of the nervous system are composed of many different types of cells, but the primary functional unit is a cell called the neuron. All sensations, movements, thoughts, memories, and feelings are the result of signals that pass through neurons. Neurons consist of three parts. The cell body (13) contains the nucleus, where most of the molecules that the neuron needs to survive and function are manufactured. Dendrites (14) extend out from the cell body like the branches of a tree and receive messages from other nerve cells. Signals then pass from the dendrites through the cell body and may travel away from the cell body down an axon (15) to another neuron, a muscle cell, or cells in some other organ. The neuron is usually surrounded by many support cells. Some types of cells wrap around the axon to form an insulating sheath (16). This sheath can include a fatty molecule called myelin, which provides insulation for the axon and helps nerve signals travel faster and farther. Axons may be very short, such as those that carry signals from one cell in the cortex to another cell less than a hair’s width away. Or axons may be very long, such as those that carry messages from the brain all the way down the spinal cord.

Scientists have learned a great deal about neurons by studying the synapse—the place where a signal passes from the neuron to another cell. When the signal reaches the end of the axon it stimulates tiny sacs (17). These sacs release chemicals known as neurotransmitters (18) into the synapse (19). The neurotransmitters cross the synapse and attach to receptors (20) on the neighboring cell. These receptors can change the properties of the receiving cell. If the receiving cell is also a neuron, the signal can continue the transmission to the next cell.

Some key neurotransmitters at work
Acetylcholine is called an excitatory neurotransmitter because it generally makes cells more excitable. It governs muscle contractions and causes glands to secrete hormones. Alzheimer’s disease, which initially affects memory formation, is associated with a shortage of acetylcholine.

GABA (gamma-aminobutyric acid) is called an inhibitory neurotransmitter because it tends to make cells less excitable. It helps control muscle activity and is an important part of the visual system. Drugs that increase GABA levels in the brain are used to treat epileptic seizures and tremors in patients with Huntington’s disease.

Serotonin is an inhibitory neurotransmitter that constricts blood vessels and brings on sleep. It is also involved in temperature regulation. Dopamine is an inhibitory neurotransmitter involved in mood and the control of complex movements. The loss of dopamine activity in some portions of the brain leads to the muscular rigidity of Parkinson’s disease. Many medications used to treat behavioral disorders work by modifying the action of dopamine in the brain.

The National Institute of Neurological Disorders and Stroke
Since its creation by Congress in 1950, the NINDS has grown to become the leading supporter of neurological research in the United States. Most research funded by the NINDS is conducted by scientists in public and private institutions such as universities, medical schools, and hospitals. Government scientists also conduct a wide array of neurological research in the more than 20 laboratories and branches of the NINDS itself. This research ranges from studies on the structure and function of single brain cells to tests of new diagnostic tools and treatments for those with neurological disorders.

For information on other neurological disorders or research programs funded by the National Institute of Neurological Disorders and Stroke, contact the Institute's Brain Resources and Information Network (BRAIN) at: