Acrocallosal syndrome (ACLS) is a multiple congenital abnormalities/intellectual disability syndrome. The clinical diagnosis is based on the presence of 3 of the 4 major criteria: 1) macrocephaly and facial dysmorphism, 2) partial or total agenesis of corpus callosum, 3) distal limb anomalies, and 4) intellectual disability. Biallelic mutations of K1F7 gene would confirm the clinical diagnosis as it was implicated in typical acrocallosal syndrome. Further, a phenotype consistent with acrocallosal syndrome was identified in 2 patients harboring de novo/dominant mutations in GLI3. The phenotypic spectrum includes a severe form with in utero fetal death known as hydrolethalus-2 syndrome usually presenting with hydrocephalus or anencephaly. This clinical variability can be explained by the action of K1F7, as it is a regulator of the Sonic Hedgehog pathway by preventing an inappropriate activation of Gli2 and the processing of Gli3 into its repressor form. The clinical spectrum of acrocallosal syndrome and differential diagnoses are discussed.

Acrocallosal syndrome (ACLS) was first recognized by Schinzel in 2 separate publications of 2 unrelated Swiss patients with macrocephaly, agenesis of the corpus callosum, hypertelorism, and polydactyly and was termed because of the unique association of corpus callosum and distal acral anomalies most commonly pre and/or postaxial polydactyly (17; 18). Biallelic mutations in KIF7 are delineated in the majority of patients, thus autosomal recessive mode of inheritance. The phenotype is ranging from the lethal anencephaly to a previously unrecognized mild end of the spectrum. In contrast, de novo heterozygous GLI3 mutations were reported in 2 unrelated patients with acrocallosal syndrome. The exact frequency of acrocallosal syndrome is difficult to determine. The clinical spectrum has been broadened not only to include hypogenesis/agenesis of corpus callosum but also cystic malformation of the brain (24; 13). Midline defects such as cleft palate or congenital heart defects have been reported. Furthermore, anophthalmia, lack of nasal structures, and omphalocele have been described (06). Nevertheless, hypogenitalism was noted in few patients (22; 10; 15).

Diagnosis of the acrocallosal syndrome is based on the observation of macrocephaly, facial dysmorphism, preaxial and postaxial polydactyly of hands and feet, mental retardation, and partial or total agenesis of the corpus callosum. 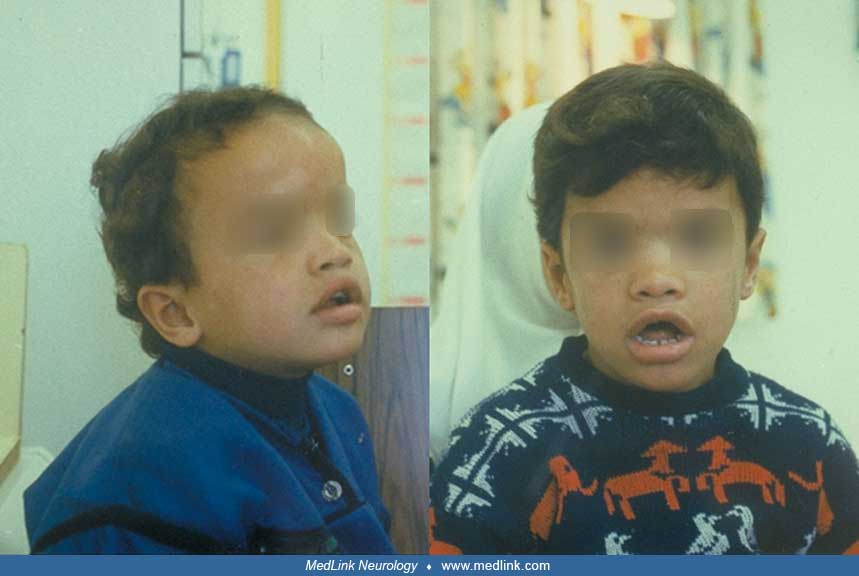 Limb anomalies. Most often postaxial polydactyly type A (well-formed extra digit) or type B (pedunculated postminimi) is observed in the hands and feet associated to preaxial polysyndactyly of the feet. The severity varies, ranging from a broad first toe to a complete duplication of all the structures.

Other skeletal abnormalities include shortness of the limbs, epiphyseal dysplasia, multiple joint dislocations, tibial agenesis, or brachymesophalangy (Sueldo and Fernandes 1993; 25; 15). With age, patient may develop kyphoscoliosis.

Neuroradiologic anomalies. Agenesis or hypogenesis of corpus callosum is considered a cardinal feature. Interestingly, 2 patients with KIF7 mutations did not display callosal anomalies (15). In addition, ventriculomegaly and hypoplastic cerebellar vermis presenting with molar tooth sign are the main neuroradiologic anomalies. Intracerebral cysts were found in 20% of patients and may be a useful diagnostic feature. The walls of these cysts consist of epidermal or choroid plexus cells, indicating abnormal cerebral ventricle development. Cerebellar and/or brainstem hypoplasia, (09), polymicrogyria (05), pachygyria (Sueldo and Fernandes 1993; 09), and heterotopias (13; 08) were also reported in individual cases (13).

KIF7, the human ortholog of Drosophila Costal2, encodes a ciliary protein and is a key regulator of sonic hedgehog (SHH) signaling pathway through regulation and processing of GLI transcription factors, by preventing an inappropriate activation of Gli2, and as a positive regulator by preventing the processing of Gli3 into its repressor form (16). KIF7 is essential for maintaining Golgi structure and regulating microtubule acetylation and stabilization, which could explain cilia anomalies observed in the loss of KIF7 function (07).

Heterozygous mutations in the KIF7 gene were identified in patients with other ciliopathies such as Bardet-Biedl syndrome, Meckel syndrome, Pallister-Hall syndrome, and orofaciodigital 6, suggesting a modifier effect of KIF7 variations (16).

The incidence and prevalence of acrocallosal syndrome are yet to be determined. Fewer than 50 cases have been reported, and many of them are located around the Mediterranean basin. Thus, it was proposed to be higher in that area (15; 04; 03).

Genetic counseling. Agenesis of the corpus callosum and polydactyly could be detected early by prenatal ultrasound. Acrocallosal syndrome should be considered in the differential diagnosis and genetic testing of K1F7 and or GLI3 gene mutations will confirm the diagnosis.

After having an affected child with biallelic K1F7, couples are considered to be at high risk of being heterozygote carriers for acrocallosal syndrome and are given a 25% risk of recurrence for each subsequent pregnancy. In contrast, the reported GLI3 mutations are de novo, thus minimal recurrence risk. Genetic testing is crucial in genetic counseling, carrier detection, and family planning (21).

Macrocephaly is an autosomal recessive disorder characterized by distinctive facial features including macrocephaly, frontal bossing, depressed nasal bridge, and low set ears. This is associated with absent/hypoplastic corpus callosum and multiple epiphyseal dysplasia. This picture is caused by missense homozygous mutation in KIF7 (01).

The presence of macrocephaly and distal limb anomalies should attract the attention towards acrocallosal syndrome.

Rehabilitation. No specific treatment is available but symptomatic treatment.

No information is found about increased risk for reproductive failure or for premature or abnormal delivery in heterozygote carriers for the acrocallosal syndrome gene. Decreased fetal movements have been reported in some cases.

Cleft and/or high arched palate and micrognathia could make the airway manipulation difficult in children with acrocallosal syndrome. Laryngeal mask airway was advised to be adequate for airway control with spontaneous or controlled mechanical ventilation in these patients and can be recommended when difficult tracheal intubation is anticipated. Thiopental or ketamine for the induction and sevoflurane with a remifentanil infusion for the maintenance of anesthesia proved effective in 1 case (02).