This article reviews the clinical, biochemical, and molecular genetic characteristics of cerebrotendinous xanthomatosis. Cerebrotendinous xanthomatosis is an autosomal recessive disorder caused by mutations affecting the mitochondrial enzyme sterol 27-hydroxylase, with resulting cholestanol and cholesterol accumulation in virtually every tissue. There is variable clinical severity, with onset from infancy to adulthood. Typical clinical signs include early onset cataract, tendon xanthomas, and neurologic signs that include progressive adult-onset dementia, psychiatric disturbances, and ataxia. Early treatment with chenodeoxycholic acid is beneficial.

Cerebrotendinous xanthomatosis was first described in 1937 by Van Bogaert and colleagues, who reported 2 cousins with a slowly progressive neurologic syndrome with cognitive and motor impairment and cataracts (93). Tendon xanthomas were evident only in 1 patient at autopsy. The disease was described as a “cholestérinose généralisée.” Thirty years later, Menkes and colleagues identified the stored material as cholestanol, a metabolite of cholesterol present only in small amounts in controls (58). Since then, an increased serum cholestanol level has been a crucial diagnostic marker of the disease. In 1971, Salen reported that xanthomatosis was associated with defective bile acid pattern, with very low concentrations of chenodeoxycholic acid (CDCA) (79). In 1974, Setoguchi described a defect in bile-acid biosynthesis, with incomplete oxidation of the C27-steroid side chain and with a greatly increased excretion of bile alcohols in bile, feces, and urine (85). In 1980, Oftebro and colleagues reported that a defect in the mitochondrial enzyme sterol 26-hydroxylase (currently designated 27-hydroxylase) is the cause of cerebrotendinous xanthomatosis (70). These authors detected absent sterol 26-hydroxylase activity in a liver biopsy from a subject with cerebrotendinous xanthomatosis. Berginer and colleagues in 1984 reported encouraging results of long-term chenodeoxycholic acid treatment on metabolic and clinical alterations.

The human CYP27A1 gene was localized on the long arm of chromosome 2 (18), and the first mutations were described (17). The structure of the CYP27A1 gene has been established by Leitersdorf and colleagues (54). To date, more than fifty different mutations within the CYP27A1 gene have been reported worldwide (39) (Human Gene Mutation Database at the Institute of Medical Genetics in Cardiff).

Cerebrotendinous xanthomatosis usually manifests in the first decade of life with diarrhea, cataracts, and mild intellectual disability. Diarrhea develops within the first year of life, followed by motor and psychiatric symptoms, then cataracts and school difficulties between 5 and 15 years of age (25). Adolescent-to-young-adult-onset tendon xanthomas and adult-onset progressive neurologic dysfunction are typical manifestations. The clinical course of the disease is slowly progressive. Individual and intrafamilial variability is considerable (66; 96; 34; 62). It is inherited in an autosomal recessive manner. Considerable clinical heterogeneity can occur even in identical twins (107). Early treatment with chenodeoxycholic acid may stabilize or improve metabolic and clinical abnormalities (81).

Xanthomas. Tendon xanthomas, which are a hallmark of the disease, usually appear in the second or third decade of life. First estimated to be almost invariably present (13; 20), they were found in 78% of patients in a study of 55 cases (60) and less than 50% of a series of Dutch patients (99). They usually are localized at the Achilles tendon; however, they have been described also on the extensor tendons of the elbow and hand, as well as the patellar and neck tendons. Xanthomas have been reported in the lung, bones, and central nervous system. 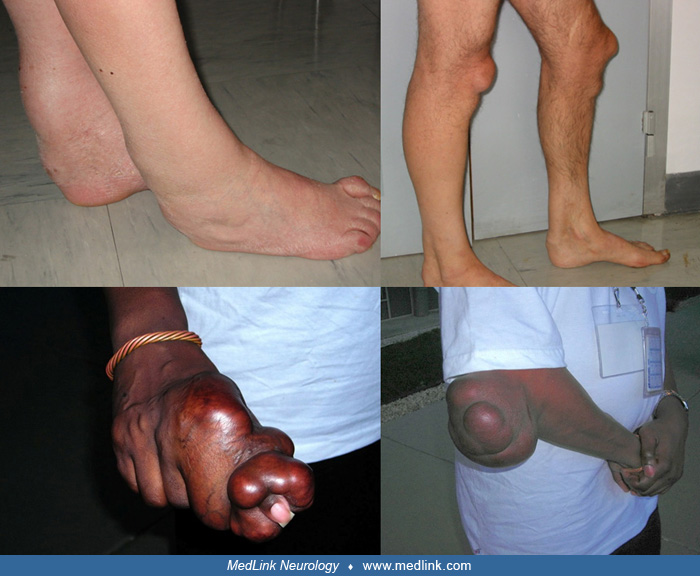 Tendon xanthomas
Different localization and severity of xanthomas in cerebrotendinous xanthomatosis. Besides the classical xanthomas of the Achilles tendon, xanthomas of the extensor tendons of the elbow and hand, the patellar tendon, and the neck...

Diagnosis may be further delayed in patients with the cerebrotendinous xanthomatosis sans xanthomas (40).

Enterohepatic system. Chronic intractable diarrhea from infancy may be the earliest clinical manifestation of cerebrotendinous xanthomatosis (99; 21). Neonatal cholestasis has been reported (26). Gallstones have been occasionally reported.

Eye. In the majority of affected individuals, cataracts are the first clinically documented finding, often appearing in the first decade of life (99; 91). Cataracts may be visually significant opacities requiring lensectomy or visually insignificant cortical opacities. The appearance can include irregular cortical opacities, anterior polar cataracts, and dense posterior subcapsular cataracts (23). Other ophthalmological findings include palpebral xanthelasmas (74), optic nerve atrophy (82), and proptosis (65). In a series of patients reported by Dotti and colleagues (age range 32 to 54 years), ocular manifestations included cataracts in all cases, optic disc paleness in about 50%, and signs of premature retinal senescence with retinal vessel sclerosis in 30% (30). Cholesterol-like deposits along vascular arcades and myelinated nerve fibers were present in some patients.

Cardiovascular system. Premature atherosclerosis and coronary artery disease have been reported (92; 38). Lipomatous hypertrophy of the atrial septum has been described (29; 38).

Skeleton. Bone involvement is characterized by granulomatous lesions in the lumbar vertebrae and femur, osteopenia with increased risk of bone fractures, and impaired adsorption of calcium, which improves with chenodeoxycholic acid treatment (14; 35). Osteopenia is evident by total body densitometry in untreated individuals. Some patients may have marked thoracic kyphosis.

Premature aging signs. Early-onset cataract, osteopenia with bone fractures and loss of teeth, atherosclerosis, and neurologic impairment with dementia or parkinsonism, associated with the characteristic facies may suggest a generalized premature aging process (31).

Mental retardation and dementia. Mental retardation, or dementia following slow deterioration in intellectual abilities in the second decade of life, occurs in over 50% of individuals (99; 60; 20). Some individuals show mental impairment from early infancy, whereas the majority has normal or only slightly subnormal intellectual functions until puberty (43). In some cases, cognitive functions are nearly normal.

Pyramidal and cerebellar signs. Pyramidal signs (ie, weakness and spasticity) and cerebellar signs (eg, ataxia) are almost invariably present starting at 20 or 30 years of age (49; 106; 20), although some studies reported lower frequencies (60). A spinal form, in which spastic paraparesis is the main clinical symptom, has been described (97; 05; 105; Takasone et al 2020).

Extrapyramidal manifestations. Extrapyramidal manifestations, including dystonia and atypical parkinsonism, corticobasal syndrome, postural tremor, and myoclonus have been reported occasionally (27; 67; 44; 52; 78; 83; 60; 106; 88). Parkinsonism is the most frequently reported movement disorder in patients with cerebrotendinous xanthomatosis, followed by dystonia, myoclonus, and postural tremor. Movement disorders are mixed in a quarter of the cerebrotendinous xanthomasosis patients with movement disorders and are usually part of a complex clinical picture, rather than a prominent symptom (88). Nevertheless, a movement disorder may be the presenting symptom in a significant proportion of cases (88).

If untreated, cerebrotendinous xanthomatosis is a slowly progressive lethal disease (93; 58; 79; 08; 86; 06). Long-term treatment may stop the deterioration and improve the neurologic functions (81; 19). Neurologic improvement is more likely when treatment is started in young patients (11; 09; 06; 94). Decrease of the size of tendon xanthomas was reported (68; 101). Complications of cerebrotendinous xanthomatosis include deterioration of vision, recurrent falls and bone fractures, urinary tract infections, pneumonia, cachexia, and heart attacks.

Cerebrotendinous xanthomatosis is caused by a deficiency of the mitochondrial enzyme sterol 27-hydroxylase. A symptomatic heterozygote carrier with clinical disease and decreased enzyme function has been reported, but no second mutation was identified despite an extensive search (89).

As a result of sterol 27-hydroxylase deficiency, bile acid production is decreased. The absence of the negative feedback mechanism of chenodeoxycholic acid on 7alpha-hydroxylase, the rate-limiting enzyme in bile acid synthesis, leads to the accumulation of intermediates as precursors for cholestanol. The increased bile alcohol level may lead to disruption of the blood-brain barrier (80). Cholestanol and 7-hydroxycholesterol accumulate in many tissues (15), including the brain, leading to progressive neurologic dysfunction. The storage of cholestanol in tissues other than the brain causes tendon xanthomas, atherosclerosis, lipomatous hypertrophy of the atrial septum, and cataracts (17).

Early diagnosis of at-risk family members using biochemical testing, or molecular genetic testing if the 2 disease-causing mutations in the proband are known, allows initiation of treatment that may prevent or limit disease manifestations. Prenatal diagnosis may be possible.

Sitosterolemia is an inherited sterol storage disease characterized by tendon xanthomas and by a strong predisposition to premature atherosclerosis. Serum concentration of plant sterols (sitosterol and campesterol) is increased. Primary neurologic signs and cataracts are not present. Spastic paraparesis may occur as a result of spinal cord compression by multiple intradural, extramedullary xanthomas (46).

In hypercholesterolemia and hyperlipemia (especially type IIa) the plasma cholestanol level is normal. When xanthomas are not evident, the differential diagnosis includes all forms of progressive mental deterioration (41; 98).

When xanthomas are not evident, the differential diagnosis includes all forms of progressive mental deterioration or mental retardation (41; 108), and in one such case the findings suggested mitochondrial disease and, specifically, myoclonic epilepsy with ragged-red fibers (MERRF) (51).

Cerebrotendinous xanthomatosis should be suspected in individuals with the following findings:

Testing. Cerebrotendinous xanthomatosis is caused by a deficiency of the mitochondrial enzyme sterol 27-hydroxylase, with resulting cholestanol and cholesterol accumulation in virtually every tissue.

Biochemical testing. The main laboratory abnormalities that distinguish cerebrotendinous xanthomatosis from other conditions with xanthomas include:

Other laboratory abnormalities that are observed but are not diagnostic include:

Beginning treatment as early as possible is essential for preventing neurologic damage and deterioration from cerebrotendinous xanthomatosis (104; 02; 26). Once significant neurologic pathology has been established, the effect of treatment is limited and progressive neurologic deterioration may continue even despite treatment (104; 32). Indeed, patients who started treatment after the age of 25 years had worse outcomes, were significantly more limited in ambulation and more cognitively impaired, and were more likely to continue to deteriorate despite treatment (104).

Clinical improvement of individuals with cerebrotendinous xanthomatosis following treatment with chenodeoxycholic acid (CDCA, a drug extensively used in the treatment of bile acid metabolism with cholesterol gallstones) was first reported by Berginer and colleagues (13). Chenodeoxycholic acid is effective in the long-term treatment of cerebrotendinous xanthomatosis, with an acceptable safety profile (95). Long-term chenodeoxycholic acid treatment (750 mg/day in adults) normalizes bile acid synthesis (leading to disappearance of abnormal metabolites from serum, bile, and urine), normalizes plasma and CSF concentration of cholestanol by suppressing cholestanol biosynthesis, and improves neurophysiologic findings and other clinical manifestations, including osteoporosis (63; 35; 64; 95). In a study of 11 years of treatment with chenodeoxycholic acid, Mondelli and colleagues reported that after 4 months of treatment, nerve conduction velocities normalized and subsequently remained stable, motor-evoked potentials and sensory-evoked potentials slowly and continuously improved, and clinical manifestations stabilized (64; 42). Neurologic deficits did not improve. The contrast between 2 untreated siblings whose symptoms progressed and a third treated sibling whose symptoms stabilized suggests that treatment is beneficial. Although chenodeoxycholic acid has been approved for gallstone dissolution, the U.S. Food and Drug Administration has not yet approved it for CTX, despite long-term efficacy and safety data (32).

Inhibitors of HMG-CoA reductase alone or in combination with chenodeoxycholic acid are also effective in decreasing cholestanol concentration and improving clinical signs (73; 100). However, because of clinical evidence that HMG-CoA reductase inhibitors may induce muscle damage and even rhabdomyolysis, caution is required in the use of these drugs (33).

Riluzole has been proposed as a potential adjunctive therapy, but the only anecdotal case utilized in this conjunction with chenodeoxycholic acid, so its marginal benefit is not clear (102).

Other possible treatments include LDL apheresis, but the results are controversial (61; 12; 28).

Liver transplantation, although never performed in individuals with cerebrotendinous xanthomatosis, remains a possibility.

Cataract extraction is typically required in at least 1 eye by 50 years of age.

Symptomatic treatments for epilepsy, spasticity, and parkinsonism have been utilized. Parkinsonism in individuals with cerebrotendinous xanthomatosis is poorly responsive to levodopa, whereas an antihistamine drug, diphenylpyraline hydrochloride, had an excellent effect in 3 individuals (71).

The clinical status of pregnant women with cerebrotendinous xanthomatosis does not deteriorate as a result of pregnancy, and elevated serum cholestanol concentration slightly decreases (07; 56; 10). Perhaps this occurs because the liver of the fetus partially compensates for the defect in bile acid synthesis of the pregnant woman. The possibility that cerebrotendinous xanthomatosis of the mother may be a risk condition for the fetus and newborn has been considered (10). Treatment with chenodeoxycholic acid should not be discontinued during pregnancy.