Since its demonstration of effectiveness against Parkinson disease in 1961, levodopa has become the mainstay therapy for this disease. However, most of the orally administered levodopa is converted by catechol-O-methyltransferase into the inactive metabolite 3-O-methyldopa before crossing the blood-brain barrier. The accumulated 3-O-methyldopa then competes with levodopa for the saturable neutral amino acid active transport system in the gut and the blood vessel wall leading to motor fluctuations. The object of catechol-O-methyltransferase inhibitors such as entacapone and tolcapone is to inhibit the action of this enzyme. 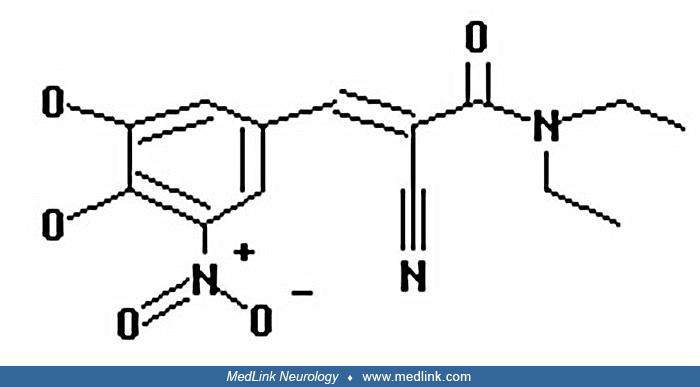 Catechol-O-methyltransferase inhibitors substantially increase the levels of free 18F-dopa in the plasma and the striatum after their administration. Catechol-O-methyltransferase inhibitors act effectively and safely to increase the amount of levodopa that is available to enter the brain by extending the half-life of levodopa, resulting in more stable levels in the plasma and prolonging "on" time. Repeated dosing of entacapone inhibits the catechol-O-methyltransferase activity in a dose-dependent manner and thereby reduces the loss of levodopa to 3-O-methyldopa, leading to improvement in the patients' clinical condition. Entacapone enhances the clinical efficacy of controlled-release levodopa formulations and is of value in extending the benefits of levodopa in Parkinson disease patients experiencing motor fluctuations. Entacapone significantly increases the bioavailability of levodopa and reduces its daily variation by 25% when administered concomitantly with a controlled-release levodopa preparation.

Peripherally acting entacapone, unlike the centrally acting tolcapone, is a safer catechol-O-methyltransferase inhibitor for the treatment of Parkinson disease because it does not interfere with mitochondrial energy metabolism at pharmacologically effective concentrations. Entacapone administration as an adjunct produces a greater reduction in homocysteine in levodopa-induced hyperhomocysteinemia when associated with low folate levels in patients with Parkinson disease.

In patients with levodopa-resistant “freezing of gait,” coadministration entacapone with L-threo-3,4-dihydroxyphenylserine, a precursor of noradrenaline, is proposed as a strategy for treatment (04).

Therapeutic drug monitoring. A liquid chromatography with ultraviolet light-based method has been shown to be reliable, practical, and cost-effective for the quantification of entacapone in human plasma (03).

Effect of different formulations of controlled-release entacapone on pharmacokinetics. Single-dose pharmacokinetics of extended-release carbidopa-levodopa (CD-LD) versus immediate-release CD-LD, sustained-release CD-LD, and CD-LD-entacapone in healthy subjects showed that bioavailability of LD from extended-release CD-LD was 83.5%, 78.3%, and 58.8% relative to immediate CD-LD, controlled-release CD-LD, and CD-LD-entacapone, respectively (06). A systematic review of randomized clinical trials showed that entacapone administered in combination with levodopa in a single tablet resulted in a better quality of life compared to separate tablets (11). Levodopa-entacapone-carbidopa intestinal gel provides continuous drug delivery through intrajejunal infusion and results in a 36.5% lower levodopa clearance, thereby lowering continuous maintenance doses regardless of patients' COMT genotype (12).

Since the 1990s, several clinical trials of entacapone have been conducted on patients with Parkinson disease who had an end-of-dose deterioration in response to levodopa. Results of published studies have shown that treatment with entacapone is associated with significant daily increases in “on” time and decreases in “off” time. Entacapone improved total activities of daily living and motor function scores, but it had no effect on mentation scores. In smaller trials, entacapone also provided benefits when given with controlled-release levodopa and aromatic-L-amino acid decarboxylase inhibitor or with standard levodopa and aromatic-L-amino acid decarboxylase inhibitor and selegiline. A few examples of clinical trials of entacapone during the past decade are given.

A double-blind randomized trial compared perampanel, a selective and noncompetitive glutamate receptor antagonist, with placebo and entacapone in levodopa-treated Parkinson disease patients with “off” problems (10). Perampanel did not have a clinically significant effect in improving motor symptoms of levodopa-treated patients, but these patients responded to the active comparator, entacapone.

A retrospective, pooled analysis of 4 phase 3 randomized, double-blind, placebo-controlled trials with entacapone showed that it improved daily “off” and “on” times compared with placebo and was generally well tolerated (07).

A metaanalysis of various studies has shown that entacapone used as adjuvant therapy to levodopa is effective in the management of Parkinson disease with fluctuations, but patients on entacapone had a higher frequency of adverse events (none were severe) than those on placebo (08).

A metaanalysis and systematic review of randomized trials has shown that levodopa/carbidopa/entacapone combination is more effective than levodopa/dopa-decarboxylase inhibitor for the treatment of Parkinson disease by improving scores in UPDRS II and UPDRS III scales (16).

Entacapone is indicated as an adjunct to levodopa and carbidopa for treatment of patients with idiopathic Parkinson disease who experience the signs and symptoms of end-of-dose “wearing-off” (so-called “fluctuating” patients).

Animal studies have shown that entacapone may also have potential for the treatment of depression commonly observed in patients with Parkinson disease.

Entacapone enhances the action of carbidopa-levodopa with longer periods of symptomatic relief in a patient with restless legs syndrome.

Proteomic analysis in mice has indicated that treatment with entacapone significantly increased proteins related to synaptic trafficking and plasticity, such as dynamin 1, synapsin I, and Munc18-1 in the synaptic vesicle fraction of hippocampus, suggesting that entacapone can be effective against various neurologic diseases related to hippocampal dysfunction (17).

Entacapone is contraindicated in patients who have shown hypersensitivity to the drug.

Entacapone is used as an adjunct to levodopa to reduce the “off” time and increase the “on” time. In long-term follow-up, the improvement seen during the first few months with entacapone in combination with routine levodopa dose remained statistically significant after a 3-year extension of a controlled trial showed that entacapone, given in combination with levodopa, has a good long-term safety profile and a sustained beneficial effect in patients with Parkinson disease with motor fluctuations.

Preliminary findings of a study indicate that fMRI can detect cortical activation changes during long-term modulation of dopaminergic treatment with entacapone in Parkinson patients with wearing-off (14). This method of evaluation needs further study.

The drug is given at a dose of 200 mg with each daily dose of levodopa and aromatic-L-amino acid decarboxylase inhibitor. The maximum daily dose is 2000 mg.

Anesthesia. No specific information is available.

Pregnancy. Although animal studies have not shown entacapone to be teratogenic, no definite opinion can be given on use during pregnancy. No information is available on the use of entacapone during breastfeeding. An alternate drug may be preferred, especially while nursing a newborn or preterm infant.

Pediatric. Entacapone has not been studied in children.

Geriatric. Entacapone is well tolerated by the elderly.

In addition to the beneficial pharmacokinetic reaction between entacapone and levodopa, inhibition of catechol-O-methyltransferase affects the metabolism of other exogenously administered catecholamines and may cause cardiovascular adverse effects such as tachycardia. Concomitant use of entacapone and selegiline does not produce any adverse cardiovascular effects.

Hepatic adverse effects (a problem with tolcapone) were not observed with entacapone. There is no convincing evidence of hepatic injury with entacapone use; therefore, monitoring of liver enzymes is unnecessary. Takotsubo syndrome, a transient cardiac cardiomyopathy involving left ventricular apical ballooning that mimics acute coronary syndrome, has been reported in a patient with Parkinson disease after starting entacapone add-on therapy (02).

An analysis of death associated with the use of an entacapone-containing drug combination in the FDA Adverse Event Reporting System database between 2004 and 2010 showed a significant risk of death with the use of entacapone, whereas death associated with the combination of levodopa and carbidopa was not statistically significant (01). This association needs to be confirmed by epidemiological studies. A long-term follow-up study has shown that therapy with entacapone is not associated with increased incidence of prostate cancer as reported in earlier clinical trials, but findings suggest that severity of prostate cancer is higher in these patients (09).