Fosphenytoin is a prodrug of phenytoin. 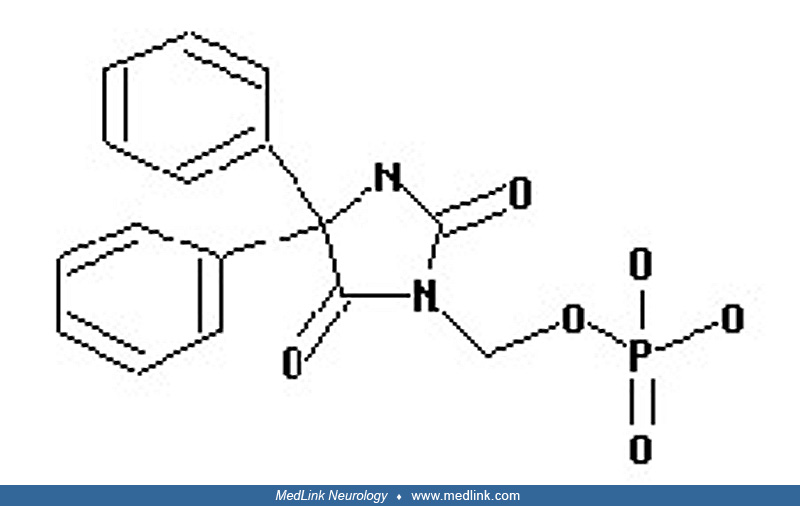 Pharmacodynamics. Following intramuscular injection, fosphenytoin is converted into anticonvulsant phenytoin by nonspecific phosphatases in the blood. The mechanism of action is like that of phenytoin. Modulation of sodium channels is the primary anticonvulsant mechanism. Fosphenytoin has equivalent anticonvulsant activity to phenytoin against seizures induced by maximal electroshock in mice following intraperitoneal, oral, or intravenous administration.

Pharmacokinetics. The important features of fosphenytoin pharmacokinetics are as follows and vary according to whether it is administered by intravenous or intramuscular injection:

Noncomparative studies. A 4-center, open-label study of fosphenytoin was conducted in 43 patients with epilepsy maintained on monotherapy with oral phenytoin twice a day. Patients received an intravenous or intramuscular dose of fosphenytoin at a dose equivalent to the morning dose of phenytoin. The intravenous infusion rate was 75 mg per minute, and intramuscular doses were given as 1 or 2 injections. Fosphenytoin was found to be an effective parenteral anticonvulsant with better tolerability than currently available parenteral preparations of phenytoin.

Comparative studies. A randomized study in patients with subtherapeutic phenytoin concentrations who presented within 48 hours of a seizure showed no significant difference between intravenous loading with phenytoin and fosphenytoin, although both were superior to oral loading.

A retrospective observational cohort study found that patients at risk of seizures were discharged from the emergency department earlier with the loading of intramuscular fosphenytoin compared to intravenous phenytoin (01).

A randomized clinical trial of levetiracetam versus fosphenytoin for seizure prevention in traumatic brain injury or subarachnoid hemorrhage showed that levetiracetam is associated with better outcome than fosphenytoin (19). However, apart from severity of generalized slowing, focal slowing and epileptiform discharges on EEG were not associated with outcomes in these patients.

A retrospective study of seizure prophylaxis in children with supratentorial intracranial hemorrhage that compared fosphenytoin and levetiracetam found the latter to be somewhat more effective in the control of seizures, although there was a significant difference in the onset of late seizures after 1 week (02).

Fosphenytoin is indicated for the control of generalized convulsive status epilepticus and may be substituted for oral phenytoin on a short-term basis.

Fosphenytoin is indicated for short-term parenteral administration when other means of phenytoin administration are unavailable, inappropriate, or deemed less advantageous. The safety and effectiveness of fosphenytoin in this manner has not been systematically evaluated for more than 5 days.

Fosphenytoin is contraindicated in:

Guidelines of the American Epilepsy Society recommended intravenous phenytoin or fosphenytoin (if available) as the antiepileptic of choice after benzodiazepines (08). A comparative study of fosphenytoin and continuous intravenous midazolam as second-line treatment for pediatric status epilepticus in Japan showed that efficacy of both was similar (14). In a retrospective study, a loading dose of 20 mg/kg intravenous fosphenytoin was effective as well as safe in controlling seizures in 88% of children with status epilepticus. Seizure control and adverse effects had only a weak relation with serum phenytoin levels achieved in this study (18).

In 2007, the Food and Drug Administration approved the first generic formulation of fosphenytoin sodium injection 50 mg/mL strength for short-term parenteral administration when other means of phenytoin administration are unavailable, inappropriate, or deemed less advantageous.

Pregnancy. Precautions for pregnant women using phenytoin are as follows:

Pediatric. Safety in pediatric patients has not been established.

Geriatric. Fosphenytoin excretion is decreased in the elderly. Lower doses and a slower rate of administration should be used.

Hepatic and renal disease. An increase in systemic adverse effects may occur following intravenous fosphenytoin loading doses in patients with renal or hepatic disease who have a decreased ability to bind fosphenytoin and phenytoin. Close monitoring and reduction in the infusion rate by 25% to 50% are recommended when intravenous loading doses of fosphenytoin are administered in these patients (07).

Fosphenytoin should be used with caution in end-stage renal disease because of the risk of hyperphosphatemia.

Interactions are the same as those of phenytoin. There is a large list of drugs (listed in Physicians’ Desk Reference) that may increase or decrease the level of phenytoin or that may be affected by phenytoin.

Intravenous fosphenytoin does not interact with intravenous diazepam, which is also used for control of status epilepticus. Concurrent use of fosphenytoin in patients on oxycodone may result in decreased analgesia due to conversion of oxycodone to inactive metabolites and can be avoided using hydromorphone, morphine, or oxymorphone (16).

In volunteers, fosphenytoin is well tolerated at intravenous doses up to 1200 mg phenytoin equivalents, using infusion rates 3 times the maximum recommended for phenytoin. In patients with epilepsy, transient postinjection cramping in the leg, tingling, mild irritation at the injection site, dizziness, ataxia, and nystagmus have all been reported. Pendular nystagmus is attributed to instability of the oculomotor neural integrator due to delays in feedback from the cerebellum and resolves following postictal recovery (17). Phenytoin-induced dyskinesias have been reported in infants but are rare. Hemidyskinesias with nystagmoid eye movements developed in an infant with Sturge-Weber syndrome following use of intravenous fosphenytoin but resolved after discontinuation of this drug (20). Right cerebral infarction was the presumed underlying cause of phenytoin-induced hemidyskinesia.

Paresthesias of the groin, back, lower abdomen, and head or neck rarely occur during infusion of phenytoin but have been reported in up to 30% of volunteers and patients receiving fosphenytoin. These paresthesias usually occur during intravenous administration of higher doses and at higher infusion rates and resolve rapidly without sequelae. Purple glove syndrome is a rare complication of intravenous phenytoin use that usually presents with pain, swelling, and discoloration at the injection site, which spreads to the distal limb (03). A case of purple glove syndrome has been reported in a patient receiving fosphenytoin, which resolved following discontinuation of therapy and treatment with methylprednisolone (13).

The most important adverse reaction following the use of intravenous fosphenytoin is cardiovascular collapse and CNS depression. Hypotension can occur when the rate of administration is faster than 150 mg per minute. In patients presenting with acute cerebral symptoms, intravenous infusion of fosphenytoin may cause significant decrease in blood pressure, which is not seen in similar patients receiving intravenous levetiracetam (09). In a study, hypotension occurred in 39% of patients receiving an intravenous infusion of fosphenytoin for status epilepticus, and old age as well as systemic infection increased the risk of hypotension (11). The U.S. Food and Drug Administration's Adverse Event Reporting System databank contains numerous reports of adverse cardiac events likely related to fosphenytoin infusion, including cardiac deaths. It is recommended that cardiac monitoring be used when administering intravenous fosphenytoin to high-risk patients.

Management. Most of the adverse effects subside spontaneously and may require observation of patients a few hours longer following the administration of fosphenytoin.