In this article, the author discusses hyperhomocysteinemia and reviews developments in the understanding of its relationship with cerebrovascular disease and dementia. Although folic acid, vitamin B12, and vitamin B6 lower homocysteine levels, many recent randomized, controlled trials suggest that treatment with these vitamins does not clearly lower the risk of vascular disease.

The hypothesis that hyperhomocysteinemia is a risk factor for vascular disease was proposed in 1969 by Dr. Kilmer S McCully, who observed advanced atherosclerosis in children with rare inherited disorders causing markedly elevated levels of total plasma homocysteine (35). The persons homozygous for cystathionine beta-synthase deficiency, leading to homozygous homocystinuria, frequently develop premature atherosclerosis and thrombotic complications as stroke (40). There has been a resurgence of interest in hyperhomocysteinemia because of the recognition that even moderately elevated concentrations of total plasma homocysteine are associated with increased risk of stroke, cardiovascular disease, and venous thrombosis (07; 46; 11).

The age of onset and severity of clinical features vary widely among affected individuals. However, approximately 50% of patients with severe hyperhomocysteinemia develop stroke, myocardial infarction, or pulmonary embolism prior to 30 years of age (41).

A study of centenarians with and without dementia found that higher homocysteine level is 1 of the factors predicting dementia. Other factors were poorer nutritional status, lower blood pressure, and higher inflammatory activities (10). An observational study of 543 patients found the association between 3 measures (hyperhomocysteinemia, low folate level, low vitamin D level) and dementia more pronounced in subcortical vascular dementia than in Alzheimer disease (38).

In a large international survey of patients with severe hyperhomocysteinemia due to cystathionine β-synthase deficiency, mortality by 20 years of age was approximately 5% in pyridoxine-responsive patients and 20% in those resistant to pyridoxine (41). The major causes of death were stroke, myocardial infarction, and pulmonary embolism.

Moderate hyperhomocysteinemia has been known to be a strong predictor of mortality in patients with coronary artery disease (42). A study of 644 elderly patients (mean age 80.3, SD 8.7) with acute ischemic infarction showed that moderate hyperhomocysteinemia on admission was related to poor functional outcome on discharge from stroke unit, but not related to mortality (15).

A 40-year-old man without a history of classic vascular risk factors (eg, hypertension, diabetes, dyslipidemia, smoking) presented with acute onset of expressive aphasia and weakness of the right face and arm. MRI of the brain showed an acute left frontal lobe infarct. Carotid duplex, transcranial Doppler ultrasonography, and transthoracic and transesophageal echocardiography did not reveal any abnormalities.

Apart from genetic etiologies and predispositions, individuals can develop hyperhomocysteinemia due to acquired defects of the metabolism of methionine via abnormalities in folate-, cobalamin- or betaine-dependent pathways. There is a well-documented inverse relationship between plasma levels of vitamin B12 and folic acid and plasma levels of homocysteine. 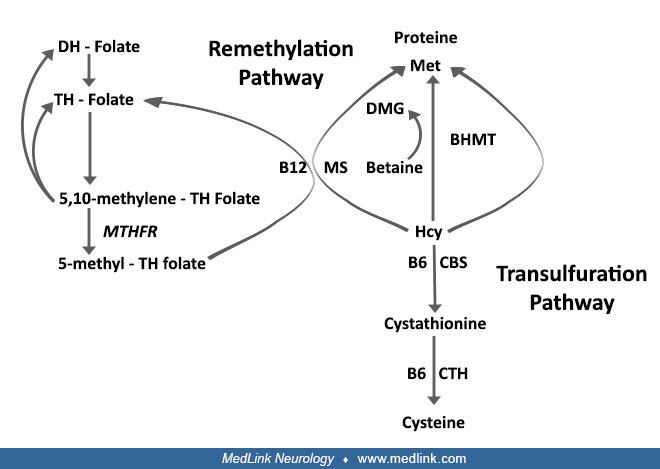 Homocysteine is converted to methionine by receiving a methyl group from 5-methyltetrahydrofolate (active form of folate; betaine). Irreversible removal of homocysteine occurs via the transsulphuration pathway, which combines H...

Hyperhomocysteinemia often results from a dysfunction in homocysteine metabolic pathway to methionine or cystathionine. The 2 most commonly defected enzymes are methylenetetrahydrofolate reductase (MTHFR) and cystathionine β-synthetase.

A mutation in MTHFR in the folic acid pathway has been correlated with an increase in plasma Hcy concentrations and can possibly be a risk factor for cerebrovascular disease (26). The most common mutation occurs in a C-to-T point mutation at the nucleotide C677T (switching alanine to valine), leading to reduction of the basal activity of the enzyme (16). It is estimated that the heterozygotes with this mutation are 40% to 50% and the homozygotes 5% to 15% in several populations. This mutation leads to elevated plasma Hcy levels, without clear association with increased stroke risk, especially in adults (08).

Decreased renal clearance of homocysteine in patients with chronic renal failure may contribute to hyperhomocysteinemia.

A more recent paper from France suggests that hyperhomocysteinemia worsens cardiovascular disease by increasing the production of hydrogen sulfide, in turn decreasing the expression of adenosine A2 receptors on the surface of cardiovascular and immune cells, leading to ischemia and inflammation (44).

Moderate hyperhomocysteinemia due to deficiency of cystathionine β-synthase has a prevalence of 0.5% to 1.0% in North American and European populations. The C677T mutation in methylenetetrahydrofolate reductase is more prevalent, occurring in up to 15% of the general population. This mutation produces a thermo-labile enzyme that predisposes to moderate hyperhomocysteinemia, especially in folate-deficient patients.

The most common causes of moderate hyperhomocysteinemia are nutritional deficiencies of folic acid or vitamin B12. It is estimated that up to 30% of the elderly population may have moderate hyperhomocysteinemia due to a deficiency of folic acid (06). Before 1996, 90% of Americans did not ingest the minimum 400 mcg/day of folic acid. A regulation by the Food and Drug Administration mandated that, after 1998, all bread, pasta, rice, cornmeal, and grain products are required to contain 140 mcg folic acid per 100 gr of flour, with the goal to increase folic acid intake in women of child-bearing age, reducing the neural tube effects in their children (34). Only modest reductions of Hcy levels have been since then noted, after vitamin supplementation.

An association between total homocysteine levels and white matter hyperintensity volume on the fluid-attenuated inversion recovery (FLAIR) brain MRI sequence was suggested in a substudy of the Northern Manhattan Stroke Study (NOMASS) (56).

A cohort study of 1226 middle-aged and older patients in Shanghai, China with a 17-year follow-up suggested significant association between elevated Hcy levels (> 10 mmol / L) and the risk of stroke, cerebrovascular disease, and new onset hypertension (13).

In 1996, the US Food and Drug Administration (FDA) mandated that all enriched grain products be fortified with 140 µg of folic acid per 100 g of cereal grain due to the potential beneficial effects of folic acid for prevention of neural tube defects and vascular disease (34). Based on data from the Framingham Offspring Study, this policy appears to have been successful in decreasing population mean plasma homocysteine concentrations (23).

Population-wide screening for moderate hyperhomocysteinemia is not recommended currently because of the lack of randomized trials proving efficacy of lowering homocysteine and the high cost of the test (33).

Prenatal diagnosis is feasible for cystathionine β-synthase deficiency, which is the most common cause of hereditary severe hyperhomocysteinemia.

Moderate hyperhomocysteinemia must be included when ischemic stroke occurs in young adults. Other differential diagnoses of stroke in young age are:

Although a number of different methods have been developed for this purpose, a specific technique utilizing liquid chromatography-tandem mass spectrometry provides several advantages in terms of speed, sensitivity, and specificity (59).

Specialized tests for detection of specific DNA mutations in cystathionine β-synthase or methylenetetrahydrofolate reductase are available in reference laboratories.

If the homocysteine is elevated, levels of folate, vitamin B12, and vitamin B6 could also be measured because they may be helpful in determining whether specific supplementation with 1 of these vitamins may be most efficacious. Additionally, further work-up for an etiology of these deficiencies may be warranted, especially vitamin B12 deficiency.

Mainstay of therapy to lower the plasma homocysteine levels is the vitamin B complex, comprising pyridoxine (B6), cobalamine (B12), and folic acid.

Initial therapy for severe homocysteinemia consists of oral administration of large doses of pyridoxine (250 to 1200 mg daily). Supplementation with folic acid and vitamin B12 are often added because about 50% of patients with cystathionine β-synthase deficiency do not respond to pyridoxine.

Additional therapeutic measures may also be helpful, such as dietary methionine restriction and administration of methyl donor betaine.

Most trials of patients with established vascular disease or cognitive dysfunction have found no benefit of homocysteine lowering by B vitamin complex therapy.

In the Vitamin Intervention for Stroke Prevention (VISP) trial, high-dose vitamin B complex therapy did not affect the risk of recurrent ischemic stroke, compared with a low-dose therapy (53).

In the Vitamins to Prevent Stroke Study (VITATOPS) trial, 8164 patients with recent stroke or transient ischemic attack were randomized to vitamin B complex versus placebo. After a median of 3.4 years of follow-up, the study found no effect of vitamin B complex supplementation on risk of stroke (54). However, as noted in the editorial accompanying the article, there is still place for further trials of homocysteine lowering treatments if the intervention can achieve and sustain large reduction in homocysteine levels (48).

In the SU.FOL.OM3 trial, patients with history of heart disease or ischemic stroke were randomized to vitamin B complex and/or omega-3 versus placebo. No effect of vitamin B therapy on reducing risk of primary outcome was found (17).

In the HOPE2 trial in patients with established vascular disease or diabetes mellitus, vitamin B complex therapy did reduce homocysteine levels, but did not affect the composite end-point of cardiovascular death, myocardial infarction, or stroke (20).

However, the investigators in the China Stroke Primary Prevention Trial (CSPPT) showed that folic acid supplementation significantly reduced the risk of stroke in China, where folate fortification has not been implemented (21), eventually suggesting that serum levels of Hcy and vitamin B12 should be measured in patients with stroke and elevated Hcy should be treated with B vitamins (51).

Another study of ischemic stroke patients with elevated homocysteine levels in China showed that the TT genotype of the C677T allele of the methylenetetrahydrofolate (MTHFR) gene was common in this population and an independent risk factor for poor efficacy of Hcy lowering treatment (09).

A metaanalysis of folic acid supplementation in 26 randomized trials found no effect on the risk of cardiovascular disease (58).

Another metaanalysis of folic acid supplementation in 30 randomized trials found 10% reduction of stroke risk and 4% reduction of overall cardiovascular disease risk. A greater benefit was observed among the participants with lower plasma folate levels and without preexisting cardiovascular disease. Folic acid supplementation had no significant effect on risk of coronary heart disease (30).

An analysis based on Mendelian randomization and genetic testing associated with various stroke subtypes revealed that Hcy and folate levels are associated with the small vessel disease subtype (29).

The 2014 American Heart Association guideline for primary stroke prevention recommended that vitamins B complex might be considered for the prevention of ischemic stroke in patients with hyperhomocysteinemia, but its effectiveness is not well established (37).

The ineffectiveness of homocysteine lowering therapy may suggest that hyperhomocysteinemia is a marker for vascular disease or cognitive decline, but not a cause of them.

Hyperhomocysteinemia does not usually necessitate special considerations for anesthesia other than recognition of increased risk of postsurgical thromboembolic complications. The use of intraoperative nitrous oxide may cause transient hyperhomocysteinemia (03).