The terms “superior oblique paralysis,” “trochlear nerve palsy,” and “fourth nerve palsy” are essentially interchangeable for the purposes of this review.

The fourth cranial nerve is the smallest cranial nerve, but it also traverses the longest intracranial course (31). It innervates the superior oblique muscle, whose primary actions are depression and incyclodeviation of the eye. Paresis of the superior oblique muscle causes elevation and excyclodeviation (temporal rotation of the 12 o’clock meridian) of the affected eye. Patients with fourth nerve palsies complain of binocular vertical diplopia, typically seeing one of the images as tilted (torsional diplopia).

Ocular movements often appear normal, but reduced infraduction-in-adduction may be evident in approximately one third of cases (20). Superior oblique weakness is frequently associated with overaction of the ipsilateral antagonist inferior oblique (18) or overaction or contracture of the contralateral superior rectus (27; 20). On alignment testing, patients exhibit an incomitant hypertropia of the affected eye in a characteristic pattern that can be elicited by the 3-step test (34).

The first step is to determine which eye is hypertropic (higher) in primary position. The second step is to determine whether the hypertropia is greater in right gaze or left gaze. The third step is to determine if the hypertropia is greater in right head tilt or left head tilt. An isolated fourth nerve palsy should cause ipsilateral hypertropia in primary gaze that increases on contralateral gaze and ipsilateral head tilt. Hypertropia occurs due to loss of the depressor action of the superior oblique, whose major depressor action occurs when the eye is adducted. The affected eye is hypertropic in primary gaze position and becomes more hypertropic in adduction (contralateral gaze). In ipsilateral head tilt, the eye normally incyclodeviates due to action of the superior rectus and superior oblique muscles. With loss of superior oblique function, the unopposed action of the superior rectus causes the affected eye to elevate further.

Although this characteristic misalignment pattern is highly suggestive of a fourth nerve palsy, many patients do not manifest all components of the 3-step test. In a prospective study of 50 patients with isolated superior oblique atrophy identified on magnetic resonance imaging (MRI), only 35 patients (70%) fulfilled the entire 3-step test. Fourteen patients (28%) fulfilled 2 steps, and one patient fulfilled only 1 step (21). A retrospective study of 166 patients with clinically diagnosed unilateral fourth nerve palsy determined a sensitivity of 75% for the 3-step test (20). Detailed anatomic study of superior oblique muscle innervation revealed variable compartmentalization of the trochlear nerve into 1, 2, or 3 branches, which may explain the variable presentations of superior oblique palsy (31).

Most patients adopt a compensatory head tilt contralateral to the paretic eye in order to reduce the ocular misalignment (18). Some patients have a paradoxical head tilt towards the side of the fourth nerve palsy, presumably to increase vertical separation and allow the patient to ignore the second image more easily (16).

Cyclodeviation can be assessed by ophthalmoscopy or by the double Maddox rod and Lancaster red-green tests. Objective cyclodeviation is measured by comparing the position of the fovea and the optic nerve on a fundus photograph or during ophthalmoscopy (17). In patients without fourth nerve palsy, a horizontal line through the fovea intersects the inferior half of the optic disc (04). If the horizontal line intersects below the inferior disc border, the eye is excyclodeviated. Conversely, if the horizontal line intersects the superior half of the disc, the eye is incyclodeviated. Double Maddox rod and Lancaster red-green tests measure perception of torsion by having patients align images viewed separately by each eye. Because the amount of subjective and objective cyclodeviation often differs, both measurement methods should be used where possible (40).

If the palsy affects the better-seeing, or dominant eye, patients may fixate with the paretic eye, causing the unaffected eye to appear hypotropic. Furthermore, the nondominant eye tends to exhibit more excyclotorsion on fundus photography regardless of the side of the paresis (17).

Bilateral fourth nerve palsies may manifest with: (1) right hypertropia in left gaze and left hypertropia in right gaze; (2) hypertropia that alternates from right to left with right head tilt and left head tilt (double Bielschowsky test); (3) greater than 10 degrees excyclodeviation on double Maddox rod test; and (4) esotropia that is greater in downgaze than in upgaze (“V pattern esotropia”). However, many patients do not demonstrate all of these findings, and clinical judgment must be exercised (30).

Non-isolated fourth nerve palsies will be accompanied by clinical manifestations that depend on the location of the causative lesion. The fourth cranial nerve nucleus is located in the midbrain at the level of the inferior colliculus. After exiting the brainstem dorsally, the nerve crosses in the anterior medullary velum, passing between the superior cerebellar artery and the posterior cerebral artery and continuing into the subarachnoid space. The nerve travels within the lateral wall of the cavernous sinus and enters the orbit via the superior orbital fissure to innervate the superior oblique muscle.

The prognosis for recovery depends on the etiology. Microvascular ischemic palsies typically recover spontaneously over the course of 3 months (28). Fourth nerve palsies due to other etiologies may not recover but are often well palliated with prism spectacles or strabismus surgery. A cohort study found increased risk of stroke (hazard ratio 6.0) in the first year after new-onset fourth nerve palsy (39).

A 21-year-old otherwise healthy young man presented with a 1-year history of intermittent diplopia. He described the 2 images as being obliquely displaced. The diplopia was worse in the evenings or when tired and resolved with closure of either eye. He found that it was worse on right gaze. Initially it occurred infrequently but had become nearly constant over the previous month.

Review of the patient’s driver’s license confirmed a longstanding right head tilt and a diagnosis of decompensated congenital fourth nerve palsy was made. He was fitted with a 5-diopter base down Fresnel prism over the left eye, which allowed him to fuse comfortably. 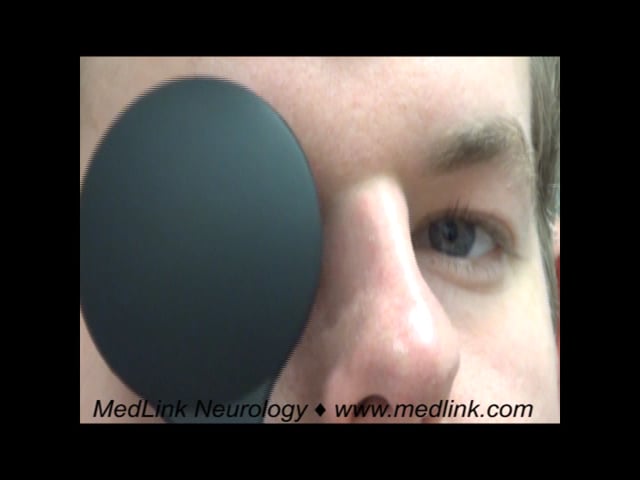 The etiology of isolated fourth nerve palsies differs depending on age group. In children, most cases are congenital (up to 85%), with a minority being traumatic. Other causes are rare in children (13). In adults, most cases are caused by decompensation of a congenital palsy (35% to 38%), microvascular ischemia (18% to 47%), or trauma (9% to 33%). Isolated fourth nerve palsy is only rarely associated with intracranial tumors (0% to 8%) (28; 12; 08).

Bilateral fourth nerve palsies may be due to trauma, tumor, or decompensated congenital, ischemia, and intracranial hypertension or hypotension (05; 28; 24). Rare cases of periodic (“cyclic”) fourth nerve palsy have been reported (37).

Fourth nerve palsy may affect patients of any age, any race, and either gender, but it may be more common in males than females. Decompensated congenital fourth nerve palsy most commonly presents in the fourth decade of life (08).

There are no preventive measures to avoid fourth nerve palsy.

Traumatic fourth nerve palsy can be diagnosed on the basis of a history of significant head trauma. Neuroimaging is typically obtained at the time of injury, and no further evaluation is required if the physical findings are consistent with the history of trauma.

Patients with congenital fourth nerve palsies may present in childhood or as adults with loss of the ability to maintain motor fusion. Distinguishing between acquired causes of a fourth nerve palsy and decompensation of congenital fourth nerve palsy can be done by thoughtful history and physical examination. Old photographs may show a head tilt as a child, years before the onset of diplopia. Facial asymmetry with hypoplasia on the side of the head tilt is evidence that the head tilt has been present since childhood. When measuring alignment, hypertropia greater or equal in upgaze compared to downgaze is highly suggestive of congenital fourth nerve palsy (14). Patients with longstanding fourth nerve palsy frequently develop sensory adaptations to their condition and show minimal subjective torsion on double Maddox rod testing, despite the presence of anatomic excyclodeviation on fundus examination. Patients may also have increased vertical fusional amplitudes, often greater than 10 prism diopters. In contrast, patients with acute, acquired fourth nerve palsy are able to fuse only 2 to 3 prism diopters of vertical misalignment. Patients with fourth nerve palsy from slow-growing tumors or thyroid eye disease may also show increased vertical fusional amplitudes (35). Nonetheless, isolated fourth nerve palsy with signs of chronicity is most likely congenital and does not require further diagnostic evaluation. High-resolution MRI may demonstrate a small superior oblique muscle owing to denervation atrophy or even agenesis of the trochlear nerve (49; 19). The severity of superior oblique muscle hypoplasia on MRI does not correlate with ocular motility and should not be used for prognostication (19).

Acute acquired fourth nerve palsies in the older population are most often caused by ischemia to the subarachnoid segment of the nerve. Ischemia can be presumed if the following criteria are fulfilled: (25):

Spontaneous recovery occurs in ischemic fourth nerve palsy within 3 months in at least 93% of cases (28). In these patients, neuroimaging is unnecessary and is unlikely to uncover a related lesion (29). Patients with progressive or non-resolving fourth nerve palsy, or new neurologic signs or symptoms, should undergo prompt neuroimaging.

Young patients (aged younger than 50 years) or those without arteriosclerotic risk factors who present with acute isolated fourth nerve palsy should also undergo neuroimaging. However, many of these patients will have no identifiable cause and frequently resolve spontaneously within several months (07; 32).

Elderly patients should always be screened for symptoms of giant cell arteritis, including headache, scalp tenderness, jaw claudication, joint pains, anorexia, or vision loss. Those who have suspicious symptoms should have testing for erythrocyte sedimentation rate, C-reactive protein, and consideration of temporal artery biopsy (38). Patients with variable or fatigable motility findings or ptosis should be evaluated for myasthenia gravis.

Patients with non-isolated fourth nerve palsy should always undergo prompt neuroimaging, preferably MRI. Further studies, such as lumbar puncture and laboratory investigations, are directed by the specific clinical presentation. Imaging for patients with orbital signs should be directed to the orbit.

Acute isolated fourth nerve palsies in patients who have conventional risk factors for arteriosclerosis may be presumed to have an ischemic cause and may be observed for resolution. If no improvement occurs within 3 months, the diagnosis should be revisited and further investigations performed. Symptomatic improvement can be achieved by patching one eye to alleviate diplopia during the healing period. Fresnel prisms can also be affixed to spectacles for temporary correction of the misalignment.

For patients with decompensated congenital or traumatic fourth nerve palsies that are unlikely to improve, Fresnel or ground-in prisms are an effective therapy. The limiting factor to patient satisfaction is the degree of incomitance of the palsy, rather than its magnitude, as even large misalignments may be palliated with prisms (43).

Patients who fail prism spectacles may benefit from strabismus surgery. The most common surgical approaches include tightening of the affected superior oblique muscle, weakening of the antagonist inferior oblique muscle, and weakening of the contralateral inferior rectus muscle (Wang and Flanders 2016). However, surgical treatment may involve any of the cyclovertical muscles, and is determined by the vertical and torsional magnitude and comitance of the misalignment (01). Forced duction testing may add additional information for surgical planning in selected cases (eg, absence or laxity of the superior oblique tendon) (26). Injection of botulinum toxin into the antagonist inferior oblique muscle can provide temporary relief of diplopia and can assist with prediction of postoperative outcomes (02).

Most patients with idiopathic or ischemic fourth nerve palsy resolve spontaneously (07; 28). Treatment outcomes in patients with persistent palsies are favorable. In one study, 92% of 83 patients treated with prism spectacles were satisfied (43). Surgical correction is also successful but varies depending on the definition of success (10).