The era of antiepileptic drugs started with the introduction of bromides in 1857. It was followed by the discovery of the anticonvulsant effect of barbiturates in 1912 and the introduction of hydantoins in 1916. Carbamazepine was introduced into clinical practice as an antiepileptic drug in 1963. Carbamazepine as well as lamotrigine blocks the repetitive firing of neurons by blocking sodium channels. Unrelated to any previous antiepileptic drug, lamotrigine reduces presynaptic excitatory amino acid release. Like most other antiepileptic drugs, the discovery of lamotrigine was serendipitous. Its discovery was based on the suggestion that the antiepileptic effect of phenytoin and phenobarbital is due to the disturbances of folate metabolism caused by these drugs (33). This led to an investigation of several folate antagonists in animal models, including phenyltriazines with strong antiepileptic action, even though the antifolate action was mild. Lamotrigine was developed from this category of compounds for treatment of partial seizures in 1995. It is approved worldwide. 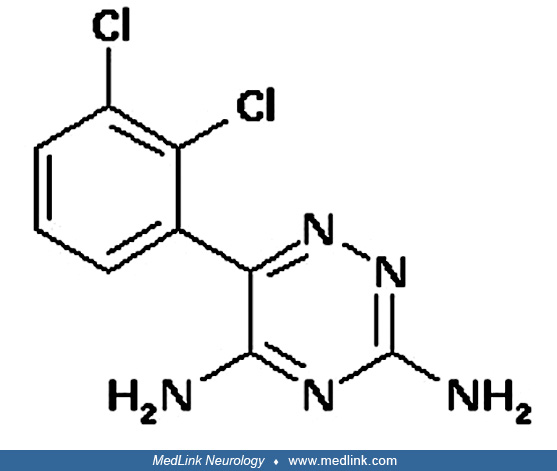 The anticonvulsant activity of lamotrigine in animal studies resembles that of phenytoin and carbamazepine, suggesting activity against partial and generalized seizures.

PET studies have shown that lamotrigine treatment reduces glucose metabolism in the thalamus, basal ganglia, and multiple regions of the cerebral cortex in newly diagnosed patients with idiopathic generalized epilepsy who were receiving the drug for the first time.

Use of lamotrigine for refractory epilepsy in patients with severe motor and intellectual disabilities has been shown to not only reduce seizure frequency, but also to improve quality of life (01).

Pharmacokinetics. Lamotrigine is completely absorbed following oral administration, and the bioavailability is approximately 98%. In general, the pharmacokinetics of lamotrigine are linear over the dose range of 30 to 240 mg. Maximum plasma concentrations of lamotrigine in healthy volunteers and patients with epilepsy (0.96 to 3.16 mg/L) are achieved within 1 to 3 hours after the dose is given. Steady-state elimination half-life of lamotrigine in healthy young adults is approximately 25 to 30 hours. In patients also receiving enzyme-inducing drugs such as carbamazepine or phenytoin, the half-life is around 15 hours, whereas in the presence of valproic acid it is prolonged to 60 hours. In elderly patients and patients with Gilbert syndrome, the half-life of lamotrigine is lengthened but is still within the normal range. Elimination is mainly by hepatic metabolism and is reduced in the elderly. The pharmacokinetic characteristics of lamotrigine are still under investigation in children, and the elimination of the drug appears to be faster in these patients.

For clinical application, lamotrigine maintenance dose could be optimized using population pharmacokinetic models employing covariates such as concomitant antiepileptic drugs, body weight, and genetic polymorphisms (24). However, these models should be assessed for their predictability in the target population before utilizing such models in clinical settings.

Therapeutic drug monitoring. A highly sensitive, specific and fully validated liquid chromatography/mass spectrometry method has been developed for quantitative estimation of lamotrigine in human plasma (17). This assay has been used for a human pharmacokinetics study of oral bioequivalence. Lamotrigine serum concentration correlate significantly with diplopia, but not with other side effects or with clinical efficacy (15).

The lamotrigine population pharmacokinetic model, which takes into consideration the concomitant drug and the weight of the patient, is a reliable method for individualizing the dosing regimen in young patients during therapeutic drug monitoring (07). For example, estimated oral clearance (CL/F) of lamotrigine for a patient weighing less than or equal to 25 kg who is concomitantly treated with carbamazepine is 3.28 l/h.

Formulations. Lamotrigine is available in a once-daily extended-release version, which may minimize serum concentration fluctuation and may improve patient compliance as compared to the immediate-release version of the compound although there is no difference in adverse event profiles of the 2 preparations (37).

Lamotrigine as an add-on therapy suppresses seizures in patients with intractable partial epilepsy. Improvement is observed in at least 55% to 65% of trial participants. Some key clinical trials are shown in Table 1.

A systematic review of clinical trials of lamotrigine as add-on treatment for drug-resistant focal seizures showed that it was well-tolerated and appears to be effective in reducing seizure frequency, but the trials were of relatively short duration and provided no evidence for long-term efficacy (28).

Lamotrigine is contraindicated in patients who have a demonstrated hypersensitivity to the drug or its ingredients.

The aim of therapy is to control seizures. Therapy is continued for as long as seizure control is required. Lamotrigine administered as monotherapy or adjunctive therapy during long-term extension of open-label continuation studies is associated with a low incidence of adverse events in adult patients with epilepsy.

Conversion from lamotrigine immediate release to extended release formulation can help improve seizure control in some individuals with drug-resistant epilepsy (31).

A new, divisible lamotrigine formulation is bioequivalent to rate and extent of absorption to both the plain lamotrigine product and to the dispersible/chewable formulation.

Pediatric. Safety and efficacy of lamotrigine in children below 16 years of age has not been established other than in those with Lennox-Gastaut syndrome.

Geriatric. No specific statements can be made as to the efficacy and safety of lamotrigine in the elderly, but there was no evidence of increased adverse effects in elderly patients in the clinical trial population.

Pregnancy. Although lamotrigine is not teratogenic in pregnant rats, it reduces fetal folate concentration, which is a factor known to be associated with teratogenesis in animals as well as in humans. The rate of lamotrigine excretion into human breast milk is like that observed with other antiepileptic drugs. A review of 18 years of the International Lamotrigine Pregnancy Registry did not detect an appreciable increase in major congenital malformation frequency following first-trimester lamotrigine monotherapy exposure (10). Lamotrigine is among the safest antiepileptic medications in terms of fetal malformations and postpartum cognitive development, making it probably the first choice for treatment of an epileptic woman who wishes to become pregnant (25). However, increased risk of an isolated cleft palate or cleft lip deformity has been reported in infants exposed to lamotrigine in the first trimester of pregnancy (16). It should be used in pregnancy only if potential benefits outweigh the risks.

Lamotrigine levels in serum correlate strongly with the lamotrigine levels in amniotic fluid and umbilical cord blood, indicating the fetus is exposed to the drug administered to a woman during pregnancy (29). Lamotrigine clearance is markedly elevated during the first trimester, and an average dose increase by 250% is required to obtain therapeutic serum levels (14). Results of a study on mother baby pairs suggest that taking low to moderate doses of lamotrigine during the lactation period might be relatively safe, at least for a period of 1 month after delivery (44).

Anesthesia. There are no known interactions of lamotrigine with anesthesia.

Lamotrigine is generally a safe and effective drug, but it should be used with caution in patients on polytherapy and in those with complicated acute systemic and central nervous system conditions, such as fever, status epilepticus, or encephalitis.