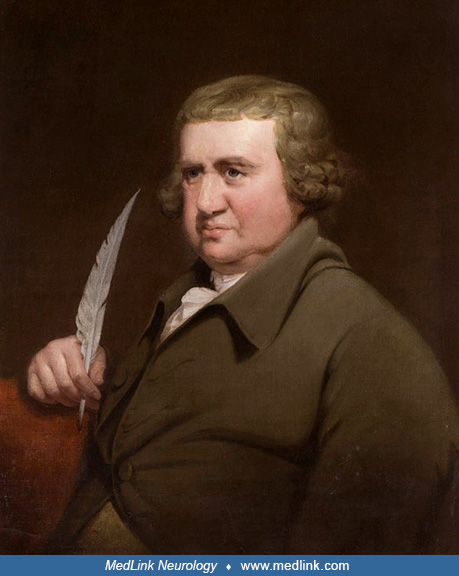 In 1881, Irish-American physician John Arthur Irwin (1853–1912) noted that sailors gradually adapt to the motion of a ship and that this adaptation may prove problematic on returning to land: 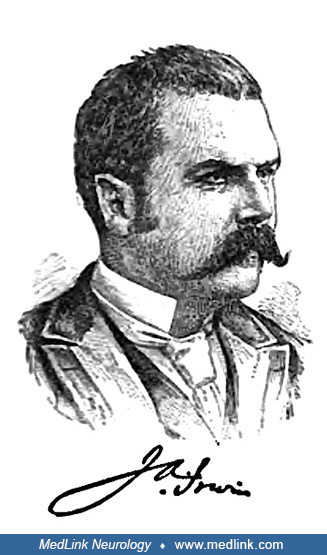 Symptoms of mal de debarquement include sensations of rocking, swaying, swinging, unsteadiness, and disequilibrium. For example, Groen reported that, "the former passenger feels himself rising and rolling when in the hotel bed on shore" (32). In general, no associated audiologic, vestibular, or vegetative symptoms are present (ie, tinnitus, hearing loss, hyperacusis, aural fullness, vertigo, nausea, vomiting, or headache). In reports where additional symptoms are described, patients were recruited from populations of "dizzy" patients (34; 13), and it is difficult to be sure that all of these subjects did not have other coincident audiovestibular or headache disorders (29). However, it is not surprising that the sensation of chronic rocking dizziness associated with mal de debarquement syndrome may aggrieve headaches in susceptible individuals (13).

Some cases develop mal de debarquement after relatively short voyages of several hours (51; 20; 46). Most cases begin immediately on returning to land, but up to 25% may develop within 6 hours of disembarkation (31; 30; 20); occasional cases reportedly may not begin for several days after disembarkation (30). Mal de debarquement can also occur following other means of conveyance, such as car travel, train travel, air travel, or space travel. Duration is usually less than 24 hours (31; 30), but some may gradually resolve over a few days (32; 30; 20). A few patients have difficulty driving until the symptoms subside (30).

Neurologic examination is generally normal in both mal de debarquement and persistent mal de debarquement (42; 57; 11; 08; 58; 59), except possibly for some hesitancy in performing tests of balance (06) or some mild unsteadiness with ambulation. However, reported physical findings in some patients have included body oscillation at 0.2 Hz, oscillating vertical nystagmus when the head is rolled from side to side in darkness, and unilateral rotation during the Fukuda stepping test (23). Symptoms may improve with the return to a ship (06; 30) or with reexposure to other passive motion (11).

Most cases resolve spontaneously. However, middle-aged women seem to be particularly likely to experience protracted symptoms following an ocean cruise, with persistence of symptoms for many years (06; 51; 42; 34; 33; 57; 11; 08). Mal de debarquement dramatically impacts quality of life, and also imposes a considerable economic burden on affected patients (41).

Case 1. A 29-year-old man noted 2 days of mild but persistent dizziness and disequilibrium, which began immediately following disembarkation from a 2-week sailing trip. One night, in the middle of the trip, he had experienced moderate sea sickness (without vomiting) when in the ship cabin at a mooring during a nocturnal tropical storm. Symptoms following disembarkation included mild disequilibrium when standing and walking and a rocking or swaying sensation when standing, sitting, or supine. Past history was unremarkable, and there was no associated vertigo, oscillopsia, hearing loss, hyperacusis, tinnitus, aural fullness, otalgia, nausea, vomiting, headache, or paresthesias. Symptoms gradually resolved without treatment.

Case 2. A 61-year-old woman noted 5 months of persistent imbalance and rocking sensations following a 7-day houseboat cruise. Other passengers had similar symptoms that resolved within a few days, whereas her symptoms persisted. Her symptoms were exacerbated by riding in an elevator as well as by heights. Examination was not reported (06).

The etiology of mal de debarquement is unknown (58; 59). It may result from an aberrant adaptive response to passive motion (38), defective or delayed readaptation or recalibration of vestibular pathways following cessation of motion (30; 42), or “pseudo-hallucinations” from vestibular memory, ie, stored vestibular information from the hippocampus (46). Individuals susceptible to mal de debarquement have relatively greater dependence on the somatosensory system than the vestibular or visual systems for maintenance of balance (52).

Sea (or space) travel presents the vestibular, visual, and proprioceptive systems with a series of unnatural and unpredictable movements of varying amplitude in a variety of planes (pitch, yaw, and roll), producing various sensory conflicts (54; 55). In contrast, terrestrial travel generally is associated with much more regular and predictable movements, without simultaneous shifts in different planes. The normal short-term multisensory adaptive response to sea travel and ship motion is recognized in the expression "getting one's sea legs." This adaptive process is thought to involve the cerebellar flocculus and the vestibular nuclei (55). Once this multisensory adaptive process – what some have called developing a new “internal model” – has occurred, post-voyage movements on land are awkward until a similar compensatory readaptation or recalibration to the conditions on land occurs. This period of readaptation is what is experienced as mal de debarquement. For unknown reasons, some patients apparently have difficulty with this readaptation process and experience persistent mal de debarquement.

The caudal aspect of the parabrachial nucleus contains neurons that are responsive to periodic rotational stimulation and that are modulated with respect to head orientation (gravity) during constant velocity off-vertical axis rotation (43). The caudal vestibulo-recipient parabrachial nucleus may help detect anomalies in control of postural stability during locomotion and may also be involved with the malaise associated with mal de debarquement (43).

Voxel-based morphometry in 28 individuals with mal de debarquement syndrome and 18 age-, sex-, and handedness-matched controls identified grey matter volume differences between cases and controls, and among cases, as a function of duration of illness (10). Differences were identified in visual-vestibular processing areas, somatosensory network structures, and a structure within the central executive network (ie, the dorsolateral prefrontal cortex).

In another study, 18F-FDG PET showed relative hypermetabolism in the occipital and prefrontal cortices and hypometabolism in the vestibulocerebellum (nodulus and uvula) among those with mal de debarquement syndrome (compared to those who were unaffected) (37). Analysis of functional connectivity of the significant regions in the PET scans revealed decreased connectivity between the prefrontal cortex and visual processing areas in the mal de debarquement group. Resting-state functional connectivities were significantly decreased between the vestibular regions of the flocculus, superior temporal gyrus, and parietal operculum and the visual association areas of the middle occipital gyrus, fusiform gyrus, and cuneus in participants with mal de debarquement syndrome (37).

The basis for the female preponderance of cases is unclear, but a potential relation has been proposed between gonadal hormone fluctuations and symptom aggravation in the motion-triggered group (48).

Some anecdotal information suggests that small doses of benzodiazepines (eg, clonazepam, diazepam, or lorazepam) can be helpful prophylactically, particularly for those with a history of mal de debarquement; patients may want to consider this as an option when planning another trip involving the previously precipitating motion (eg, a cruise).

The diagnosis of mal de debarquement is usually straightforward and is largely based on the history and a normal examination.

Mal de debarquement has some similarities to the phobic postural vertigo syndrome: in mal de debarquement, a period of motion exposure induces a persistent sensorimotor derangement, whereas in phobic postural vertigo, a self-limited organic vestibular disorder induces a persistent psychophysiologic derangement characterized by anxiety, dependent or avoidant behavior, and nonrotational dizziness, with fluctuating unsteadiness, and postural and gait instability (05). In some patients, mal de debarquement may also induce or exacerbate anxiety disorders (04).

History and physical examination are usually sufficient, and no diagnostic tests are required. However, largely because of physician unfamiliarity with this disorder, diagnosis is often delayed (41; 58; 45), and an average of 19 clinical visits is needed for patients to obtain a diagnosis (41).

Electronystagmography or video-oculography, including caloric testing, is generally normal when performed in cases of persistent mal de debarquement but may show abnormal tracking or direction-changing positional nystagmus (06; 51; 42; 37); the latter findings are nonlocalizing and of questionable significance, particularly because they may be present in approximately 10% of normal subjects (39). The video head impulse test, ocular and cervical vestibular-evoked myogenic potentials, rotatory testing, audiograms, brainstem auditory evoked responses, and cerebral imaging are also normal (or show incidental findings) (06; 51; 42; 37).

Most cases with mal de debarquement resolve spontaneously over hours to days, and no further treatment beyond reassurance is necessary for the occasional patient who seeks medical care.

Management of mal de debarquement as vestibular migraine can improve patients' symptoms and increase their quality of life. In 1 study, 11 of 15 patients (73%) responded well to management with a vestibular migraine protocol, which included lifestyle changes, as well as pharmacotherapy with verapamil, nortriptyline, topiramate, or some combination, whereas, in comparison, a retrospective control group of 17 patients demonstrated a lower rate of improvement when treated with vestibular rehabilitation and physical therapy (28).

Formal vestibular rehabilitation has had limited success in this disorder (34) and, in some cases, may produce a short-term exacerbation of symptoms before long-term improvement (51). Nevertheless, patients should be encouraged to avoid inactivity and, thus, actively participate in activities that may enhance readaptation such as walking (06; 51; 42). “Sensory reweighting,” using vestibular, somatosensory, and visual challenges twice a week over a 10-week period, has been reported to be helpful in a single case (40).

Dai and colleagues reported that “readaptation” of the vestibulo-ocular reflex produced either a cure or a substantial improvement in 70% of 24 subjects with persistent mal de debarquement syndrome for a period of approximately 1 year on average (25; 23). On the premise that maladapted rocking sensations and the associated physical symptoms could be diminished or eliminated by readapting the vestibulo-ocular reflex, subjects were treated by rolling the head from side to side while watching a rotating full-field stimulus. In a later study, Dai and colleagues report the outcomes of 141 patients (122 females and 19 males) whose heads were rolled while watching a rotating full-field visual surround (22). Significant improvement was defined as a reduction in symptom severity by more than 50%. No objective measures were used during follow-up because of the wide geographic distribution of the patients. The treatment group consisted of 120 classic and 21 spontaneous mal de debarquement patients. The initial rate of significant improvement after a week of treatment was 78% in classic and 48% in spontaneous patients. One year later, significant improvement was maintained in 52% of classic and 48% of spontaneous subjects. There was complete remission of symptoms in 27% (32) of the classic and 19% (4) of the spontaneous patients. These results have been supported by a sham-controlled trial (47).

Preliminary investigations of repetitive transcranial magnetic stimulation of the dorsolateral prefrontal cerebral cortex have reported improvements in rocking, dizziness, balance, and confidence in daily living activities compared with sham treatment (10; 53; 15; 17). Other studies have suggested that continuous theta burst stimulation over either the occipital cortex or cerebellar vermis is effective in acutely reducing the oscillating vertigo of mal de debarquement syndrome (16).

Symptoms of chronic mal de debarquement syndrome may improve during pregnancy (49). Although a hormonal basis has been suggested, this remains speculative.