Alzheimer disease is the most common underlying condition for dementia and, pathologically, Alzheimer disease is attended by amyloid plaques and neurofibrillary tangles by definition. Many autopsy studies have reported brains with neurofibrillary tangles that are indistinguishable from those of Alzheimer disease, in the absence of amyloid beta plaques. For these brains, the neurofibrillary tangles are mostly restricted to structures in the medial temporal lobe, and brainstem. Clinical biomarkers are also finding evidence of tauopathy in the absence of amyloid beta-type amyloidogenesis, and associated studies are confirming the brain changes are associated with cognitive impairment. This condition is termed “primary age related tauopathy” or PART.

Symptoms in persons with PART usually range from normal to amnestic cognitive changes, with only a minority exhibiting profound impairment (unless additional comorbid pathologies are present, which is not unusual). PART is almost universally detectable at autopsy among elderly individuals who lack amyloid beta plaques; in advanced old age, approximately 25% of persons lack amyloid beta plaques.

As a rule, every person past 80 years of age (and the great majority over 50 years of age) (21) has some PART pathology--it is presumed to exist even in those with Alzheimer disease wherein the plaque or tangle pathology renders impossible the independent evaluation of the PART pathology. Those lacking amyloid plaques, but with more severe PART pathology (Braak NFT stages III or IV), are more likely to have lower MMSE scores and subjective memory complaints or MCI. If there are other pathologies and/or if the PART pathology is severe, it can contribute to MCI or full-blown dementia. The clinical-pathological correlation studies indicate the challenge of defining a “disease” versus “normal” state in advanced old age, and PART helps explain why the average (“normal”) and even above-average neurocognitive scores among nondemented persons becomes lower in advanced old age.

New data have emerged in 2 different areas related to PART: biomarkers and clinical-pathological correlations, and these are discussed below.

There also has been some debate in the field about this pathologic entity (17), although some degree of acceptance is widespread with more than 800 citations of the original paper from 2014 to 2021.

PART was described in 2014 (13); however, patients with mild-to-moderate Alzheimer disease-type neurofibrillary degeneration in the medial temporal lobe, but lacking amyloid beta plaques, were previously described in European, Japanese, and North and South American cohorts (60; 02; 25; 31).

PART pathology appears to correlate with a clinical biomarker profile that has been termed “SNAP,” or “suspected nonamyloid pathology/pathophysiology,” describing persons with possible age-related neurodegeneration but lacking Alzheimer disease-type A-beta amyloidogenesis according to biomarkers (28; 35; 61; 26). However, there are other non-Alzheimer diseases that contribute to SNAP, and for a patient with profound cognitive impairments, PART would probably not be the only underlying disease.

Severe PART can be associated with cognitive impairment according to studies that interpret cases shown to lack amyloid beta pathology but before PART was described formally (23; 41). However, various confounders, including the high prevalence of comorbid brain (and non-CNS) diseases in the “oldest-old,” make clinicopathological correlations challenging in this population (44; 43; 32; 50). Most relevant prior studies have either focused on the most severe cases (with what was termed “tangle-only dementia” or some similar nomenclature) or have investigated the associations between other tauopathic subtypes (19; 31; 58).

The average age of death in individuals with PART is generally higher than in those with “pure” Alzheimer disease pathology (31; 41; 14; 13). Whereas cognitively impaired subjects with PART often carry a clinical diagnosis of possible or probable Alzheimer disease (48), the coexistence of PART and Alzheimer disease in aging is an inevitable complicating factor (65). Analyses of the National Alzheimer’s Coordinating Center (NACC) autopsy database found that approximately 14% of subjects clinically diagnosed with mild-to-moderate probable Alzheimer disease had no or sparse neuritic plaques (03; 53; 05). Data presented by Crary and colleagues indicated the following: the pathology is common and Braak stage “0” (no tangles) is unusual in older individuals; there is no strong association between PART and APOE genotype; and the more severe PART pathology is associated with a higher age of death and lower scores on cognitive tests (13). The relatively rare APOE e2 allele has been found to be more common in persons with PART (49).

Since the original article that presented PART as a clinical-pathological entity and that provided analyses of data indicating direct evidence of an impact by the disease on cognition (13), there have been developments, particularly in 2 areas: (1) additional clinical-pathological correlation studies and (2) clinical studies to highlight the importance and relevance of PART in dementia-related clinical biomarkers.

Clinical-pathology studies published since 2015 indicate that PART plays a role in dementia as well as mild cognitive impairment and subjective memory complaints (01; 36; 30; 33; 05; 04). Unfortunately, the awareness of PART by clinicians is relatively low, which is not good because the clinical course of the disease is not identical to Alzheimer disease, with which it may be diagnostically conflated (06; 57). The relevance of the pathology to states of cognitive impairment is influenced by a number of factors that include the severity of the PART pathology as well as the presence and severity of comorbid pathologies (many of which, including Alzheimer disease, cerebrovascular disease, and alpha-synucleinopathy, are very common in the older population). In one study, it was found that in PART, independent predictors of symptomatic status included depression (adjusted odds ratio [aOR] 4.20), Braak stage (aOR 1.42), and history of stroke (aOR 8.09) (05). A study of confirmed PART cases with retrospective MRI showed that “PART is associated with medial temporal lobe atrophy and predominantly affects semantic memory/language” (47). A study confirmed prior work indicating that the cognitive impairment of PART is less severe than Alzheimer disease (59). Tau-PET scans confirm the association between increased PART and cognitive impairments (12; 18).

A key question with regard to PART is the biomarker profile. An excellent discussion of this consideration can be found in a 2014 article (26), which elaborates the argument that patients with PART pathology probably have a biomarker profile termed “SNAP,” or “suspected non-amyloid pathology” (28; 35; 61; 26), where some evidence of neuronal injury or tau protein pathology is identified by CSF or neuroimaging methods, but there is no evidence of amyloid beta decrease in CSF or a plaque-amyloid ligand augmentation on PET imaging. Data from additional studies support a biomarker fingerprint of PART (27; 29; 37; 55), but the analyses require refinement because subsequent studies underscore that PART may be present in a prodromal form (in cognitively unimpaired persons) (16). Unfortunately, there is no consensus-based system for diagnostically staging the disease in the clinical context.

Prognosis of PART in isolation (without comorbid pathologies) is usually relatively benign in comparison to almost all other dementia-related conditions (04). Where PART can play an important role is in the very common scenario of worsening an already complex mixture of brain pathologies (Lewy body disease, TDP-43 proteinopathy, cerebrovascular pathologies, etc.). It is important to emphasize that this scenario is extremely common, occurring in approximately 50% of persons that escape the sequelae of Alzheimer-type plaques and tangles (the reported proportion is dependent on how one operationalizes each disease subtype).

An 80-year-old, highly educated individual was followed as a research volunteer at an Alzheimer Disease Research Center. On presentation, he met no criteria for clinical cognitive impairment and was followed as a "normal" subject. However, in his third year of longitudinal follow-up, he described "slippage" in short-term memory and was diagnosed clinically with mild cognitive impairment. An MRI at 83 years of age showed mild-to-moderate medial temporal lobe atrophy. He was followed longitudinally until his death at age 91. Although he suffered from mild cognitive impairment, a diagnosis supported by objective neurocognitive testing, he was still able to teach a class well into his 80s and maintained his ability to perform activities of daily living. His clinical course was complicated by severe rheumatoid arthritis and lung cancer, and he died from lung cancer with dementia never diagnosed. 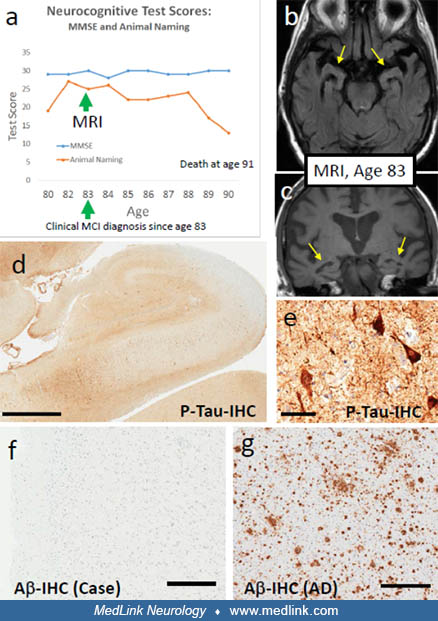 Mild cognitive impairment in elderly man
The subject was followed for 11 years from normal status until death at 91 years of age. Results of longitudinal neurocognitive tests are shown (a), including the Mini-Mental State Examination (MMSE) for global cognitive function ...

Etiology and pathogenesis are not currently understood.

Pathologic manifestations. The grading system that applies to PART is Braak neurofibrillary staging (09). The pathologic continuum of PART includes pretangle or cortical pretangle (up to Stage Ib), entorhinal (I-II), or limbic (III-IV) Braak stages (09; 10; 08). The neurofibrillary changes in PART resemble (or are identical to) those in early (but not “high level of pathology”) Alzheimer disease brains. Immunohistochemical and biochemical studies have found that neurofibrillary tangles in PART, as in Alzheimer disease, contain accumulation of both 3-repeat and 4-repeat tau isoforms (24; 54; 31; 52). In Alzheimer disease, electron microscopy demonstrates paired helical filaments, which are considered a disease hallmark (34; 64; 51). The tau fibrils in brains with PART pathology also display a typical paired helical filament morphology (25; 22; 52; 13). Pathologically, PART neurofibrillary tangles preferentially affect the CA2 portion of the hippocampus (62). Formal pathological diagnostic criteria are provided by Crary and colleagues (13).

It has been noted that there is possibly some overlap between PART and chronic traumatic encephalopathy (CTE) as both are tauopathies with both 3R and 4R tau and, thus, PART may, in some cases, be exacerbated by chronic traumatic factors such as sports injuries (38).

The ubiquity of PART in aging populations is underscored by the work of Braak and colleagues (11; 45), which show that some early Braak stage pathology is seen in literally all 50-year-olds, whereas in even 20% to 25% of centenarians, no amyloid plaque pathology is observed (43); every one of these patients lacking amyloid beta plaques has PART according to the relevant diagnostic definition. More work is required to better delineate whether epidemiologic factors (eg, brain trauma or inflammation) and/or genetics are associated with increased or decreased risk.

No prevention strategy is known; however, avoiding brain trauma may help decrease chronic traumatic encephalopathy-type tauopathy, which may overlap pathogenetically with PART.

A key issue pertinent to differential diagnosis is the biomarker profile. Patients with PART pathology probably have a biomarker profile that has been termed “SNAP,” or “suspected non-amyloid pathology” (28; 35; 61; 26), where some evidence of neuronal injury or tau protein pathology is identified by CSF or neuroimaging methods, but there is no evidence of amyloid beta decrease in CSF or a plaque-amyloid ligand augmentation on PET imaging. Another possible aid in differential diagnosis is that the cognitive trajectory (impairment over time) may be more mild in PART than full-blown Alzheimer disease. Please see discussion above about the importance of prevalent comorbid pathologies in terms of the impacts on cognition and behavior.

It is presently possible to assess the risk of Alzheimer disease (CSF and PET scans for A-beta amyloidosis) and large-vessel vascular pathologies. However, small-vessel pathologies, LATE, and ARTAG still await specific clinical biomarkers for making confident differential diagnoses in the clinical context.

There is no current consensus-based diagnostic workup for PART. However, this diagnosis should certainly be in the differential for individuals with a biomarker profile that suggests tauopathy in the absence of amyloid beta amyloidogenesis detected with PET or CSF profiling (it is hoped that a blood-based diagnostic test will be available in the future). For most people with this profile, the short-term outcomes would be better than those with true Alzheimer disease-type biomarker profile that includes amyloid beta amyloidogenesis. However, the common comorbid pathologies (eg, large and small vessel cerebrovascular diseases and alpha-synucleinopathies) may still exert strong deleterious impact on cognition independent of PART pathology. A biomarker study concluded that the pathology of PART “might not be as benign as commonly thought” (18). Although there have been numerous biomarker studies that have shown evidence of PART in live patients (29; 46), we emphasize that there have not been new recommendations for diagnostically staging the disease in the clinical context.

There is no current consensus-based clinical management for PART.

There are no known pregnancy precautions, to date.

There are no known anesthesia precautions, to date. However, there are some indications that anesthesia may promote tauopathy in animal models and may underlie the link between anesthesia exposure and increased dementia risk (63; 12).