This article addresses the basic interpretation of pure-tone audiometry as measured using a pure-tone audiometer and as summarized in a standard graphical format called an audiogram. An audiogram is a convenient tool that characterizes the degree, type, and configuration of a hearing loss. 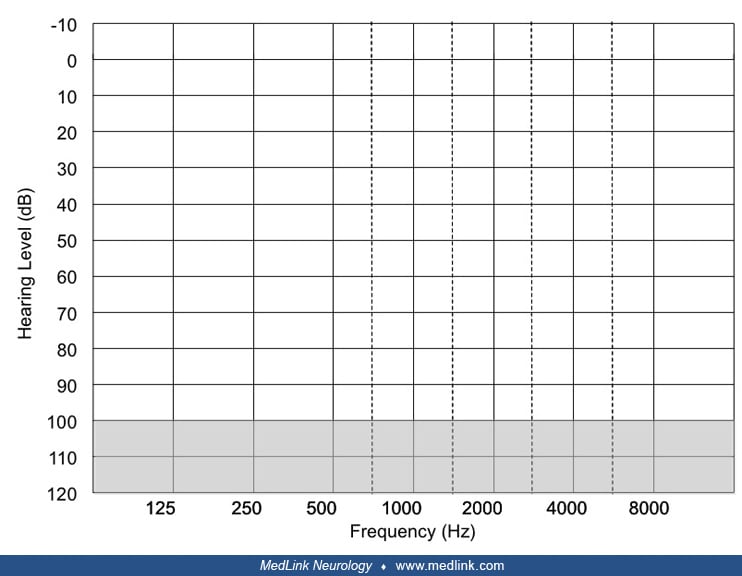 Audiogram
This is the standard audiogram format, with auditory acuity plotted as dB HL (decibels hearing loss) along the y-axis and the frequency of the pure-tone auditory stimuli plotted in Hz (hertz or cycles per second) along the x-axis....

In 1899, American psychologist Carl Emil Seashore (1866–1949) invented an audiometer that was marked initially around 1900 (28; 31; 21; 36). In the 1920s, Western Electric developed a commercially successful electronic audiometer (36). It went through a series of technological improvements, including the incorporation of bone-conduction testing capability by 1928. An early type of automated audiometer was invented by Hungarian-American biophysicist and Nobel laureate Georg von Békésy (1899–1972) and released in 1946. 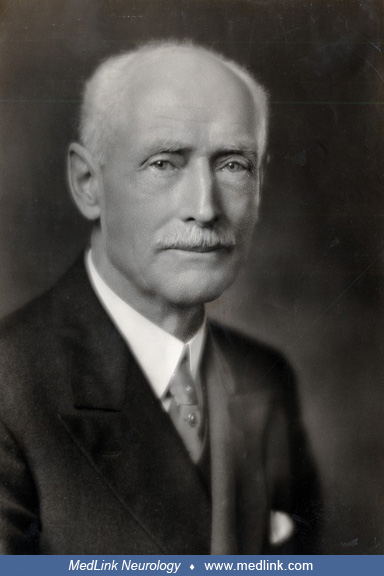 The purpose of pure-tone audiometry is to assess auditory acuity for each ear as a function of sound frequency and as a function of whether sound is conducted by air or bone. Such information provides essential information on the underlying causes of hearing impairment and is important in selecting therapeutic interventions, including hearing aids or cochlear implants, when necessary.

An audiometer consists of four parts: (1) the oscillator to change frequency of the sound waves presented to the patient (which the patient hears as a change in pitch); (2) an audio amplifier; (3) an attenuator to control volume or loudness; and (4) headphones worn by the patient for air-conduction testing, or a bone vibrator placed on the mastoid prominence for bone-conduction testing. The amplitude of a tone is commonly presented in alternating descending and ascending patterns to obtain pure-tone thresholds. Amplitude can be varied in 5-decibel increments. The lowest decibel level at which a sound is heard is called the threshold. More precisely, threshold is considered the intensity at which a patient can just detect the signal 50% of the time. The audiogram gives an easy-to-read profile of the person's threshold of hearing relative to normal hearing at each frequency as measured with the aid of an audiometer. Smartphone audiometric screening applications are being developed, which assess both air- and bone-conducted sound (32; 26; 11; 18; 03; 15; 25); smartphone applications, such as the Mobile Based Affordable Screening Audiometer (MoBASA) smartphone application, are suitably accurate for hearing screening of adults and the elderly with moderate or disabling hearing loss (18; 03; 25).

Sound-field testing is a modification of standard audiometric testing that is commonly used with infants and young children. Instead of headphones, sound is presented via the air-conduction pathway using speakers on each side of the patient. If the child turns toward the correct speaker just after a signal is presented through one of the speakers, this behavior is reinforced by illuminating or animating a toy. Sound-field thresholds cannot be obtained for each ear separately, but instead, reflect hearing in the better ear. These are marked wavy lines on the audiogram. Quick and consistent localization of the sound source suggests balanced or nearly balanced hearing between the two ears, whereas asymmetric hearing thresholds result in impaired localization.

A tablet-based automated audiometer has been developed as a method for threshold hearing assessment outside of conventional sound booths (34). Tablet-based automated audiometry has been demonstrated to be useful in children from ages 7 to 12 years (27). Results from the tablet device were generally within 10 dB of those determined by conventional audiometry and did not show proportional bias over the testing range (34; 27).

Automated audiometry devices that provide a reasonable approach for sound booths and exam rooms with low-level background noise are available (04). In addition, smartphone-based audiometry may serve as an accurate and accessible approach to hearing evaluations, especially in settings where conventional pure-tone audiometry is unavailable (08; 20). In a meta-analysis of 25 studies with a total of 4470 patients, the overall sensitivity, specificity, and area under the receiver operating characteristic curve for smartphone-based audiometry were 89%, 93%, and 0.96, respectively; the corresponding values for the smartphone-based speech recognition test were 91%, 88%, and 0.93, respectively (08).

The typical indication for audiometry is a complaint of impaired hearing (by the patient or family members), especially if supported by clinical observations of hearing impairment either in casual conversation or with bedside hearing assessment (eg, perception of finger rub, watch ticking, etc.). In general, elevated audiometric thresholds are associated with self-perceived hearing difficulty (35).

In 2012, the U.S. Preventive Services Task Force concluded that the current evidence is insufficient to assess the balance of benefits and harms of screening for hearing loss in asymptomatic adults aged 50 years or older (Moyer and U.S. Preventive Services Task Force 2012). This recommendation does not apply to persons seeking evaluation for perceived hearing problems or for cognitive or affective symptoms that may be related to hearing loss.

Parents underestimate hearing problems in their children, but they more accurately detect hearing loss if it involves speech-related frequencies that is at least of moderate severity or is bilateral (33). In a study of 827 children who were evaluated by parental assessment, the standard whispered voice test, and pure-tone audiometry, hearing loss (greater than 25 dB) was found in 6% (30). Parent suspicion of hearing loss in their children showed a poor accuracy, with a sensitivity of 21% and a Cohen's kappa coefficient of only 0.025 (fair reliability). The whispered voice test at 6 meters distance found a suspected hearing impairment in 807 (49%) of examined ears; however, its sensitivity was only 57%, with a specificity of 52% and Cohen's kappa coefficient of 0.0254 (poor reliability). Given the prevalence of hearing loss in preschool children and the low accuracy of both parental suspicion and the whispered voice test, more efficient audiometric hearing screening is needed for children before beginning school.

Audiometry is also regularly used to monitor hearing loss in noisy work environments as part of occupational hearing conversation programs. Furthermore, in occupations that involve hearing critical tasks, including some military jobs, individuals are required to undergo periodic hearing assessments to ensure that they have not developed a significant hearing loss that could impair their ability to safely and effectively perform their jobs (ie, assessments of "hearing readiness"). The typical approach for this has been limited to pure-tone audiograms, but augmenting this with speech-in-noise testing may substantially improve assessment of the readiness of service members to perform military tasks in noisy environments (29).

Disorders of hearing can be conveniently divided into conductive, sensorineural, and mixed hearing loss based on pure-tone audiometry, where conductive hearing loss occurs if there are impediments to conveyance of sound through the external and middle ears to the cochlea (eg, impacted cerumen, middle ear effusion) and sensorineural hearing loss results from dysfunction of the receptors themselves (“sensory”) or the afferent neural pathways (“neural”).

A normal audiogram is shown here: 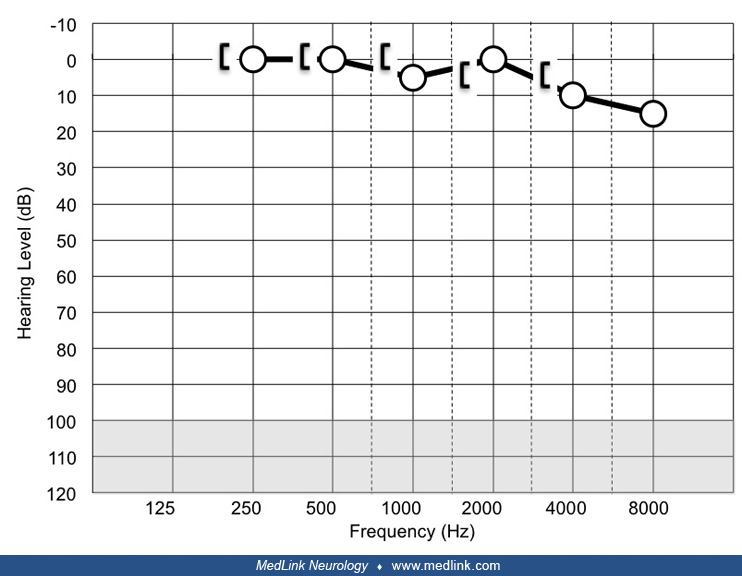 There are no significant side effects of pure-tone audiometry.

The commonly stated range of human hearing is 20 Hz to 20 kHz, but the range of hearing essential for understanding speech is generally 250 to 8000 Hz. Therefore, most audiograms use a standard set of frequencies in the range necessary for understanding speech, ie, from 250 to 8000 Hz, with the following frequencies typically included: 250 Hz, 500 Hz, 1000 Hz, 2000 Hz, 4000 Hz, and 8000 Hz. However, in 1990 the American Speech-Language Hearing Association suggested inclusion of frequencies in the range of 125 to 8000 Hz (02). Sometimes intervening frequencies are also measured, eg, 3000 and 6000 Hz. Under special circumstances, high-frequency testing is done in the interval from 8000 to 16,000 Hz, and sometimes to 20,000 Hz. Circumstances in which high-frequency audiometry may be useful include screening for ototoxic and noise-induced hearing loss, and for evaluation of presbycusis when audiometry is normal in the conventionally tested range (22; 12; 13; 19; 14; 17).

The decibel (dB) measurement unit originated from methods used to quantify signal losses in telephone circuits. Decibels provide a relative measure of sound intensity: the decibel unit is used to measure the intensity of a sound by comparing it with a given reference level (ie, the threshold of normal hearing at the corresponding frequency) on a logarithmic scale. A change in threshold by a factor of 10 corresponds to a 10 dB change in hearing level. One decibel is one tenth of one “bel,” a unit named in honor of the eminent Scottish-born scientist, inventor, and engineer Alexander Graham Bell (1847–1922). 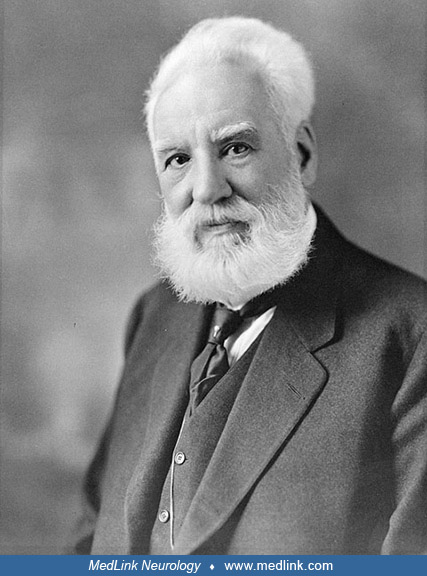 In acoustics, the bel is occasionally used without the deci- prefix, but for clinical use, the decibel is the generally used unit because 1 decibel is the just noticeable difference in sound intensity for the normal human ear. The human ear has an extremely large dynamic range: indeed, the ratio of the sound intensity that causes permanent damage during short exposure to the sound intensity of the quietest sound that the normal ear can hear is at least 1 trillion (10 to the 12th power), which can be conveniently expressed on a logarithmic scale as 12 bels or 120 dB.

Various classifications of the degree of hearing loss exist, but one of the most commonly used is given in Table 1 (09). Often the normal and the slight categories are combined into an expanded “normal” category, so that “normal” is considered to include dB HL up to 25 dB, whereas others consider “normal” to be up to 20 dB HL (05). An audiogram report accompanying an audiogram will often specify the degree of hearing loss for each frequency range or region, eg, “normal below 2 kHz, precipitously slowing to severe loss above 3 kHz.” Nevertheless, this approach may overlook cases with real and functionally important degrees of hearing loss (14).

As the degree of hearing loss increases, this has an increasing effect on the ability to understand speech (when hearing impairment is symmetric or if asymmetric as a function of hearing in the better-hearing ear). With mild hearing loss, understanding speech is difficult in a loud environment. With severe hearing loss, a great deal of effort is necessary to conduct group conversations. With profound hearing loss, verbal communication is not possible without a hearing aid.

Generally accepted conventions for audiogram symbols have been developed (Table 2), although there is not uniform agreement on the use of all symbols (06; 36). To indicate “no response” at the maximum output of the audiometer, an downward-angled arrow is attached to the lower portion of the appropriate symbol and drawn downward at a 45-degree angle to the right for the left ear symbols and to the left for the right ear symbols (01; 02).

In the absence of knowledge of these principles, physicians perform poorly on interpreting audiograms (16). It is essential for neurologists, who deal with disorders of cranial nerves and often have to assess eighth nerve function, to have an understanding of the basic principles of audiometry. Data-driven audiogram classification systems are being developed that will greatly simplify audiogram interpretation for nonspecialists (07; 10).