Tiagabine, as a novel antiepileptic, has a mechanism of action related to GABA. The synthesis of vigabatrin (gamma-vinyl-GABA) was a result of a rational approach to design compounds to inhibit the major GABA-degrading enzyme, GABA transaminase. Whereas vigabatrin is a selective and irreversible GABA-transaminase inhibitor that greatly increases whole-brain levels of GABA, tiagabine is a potent inhibitor of GABA uptake into neurons and glial cells.

The results of preclinical investigations suggest that vigabatrin and tiagabine are pharmacologically distinct compounds with different anticonvulsant, neurotoxicity, and pharmacokinetic profiles. It is possible that they will ultimately prove to have different clinical efficacies and spectra of activity. The molecular formula of tiagabine is C20 H25 NO2 S2 HCl. 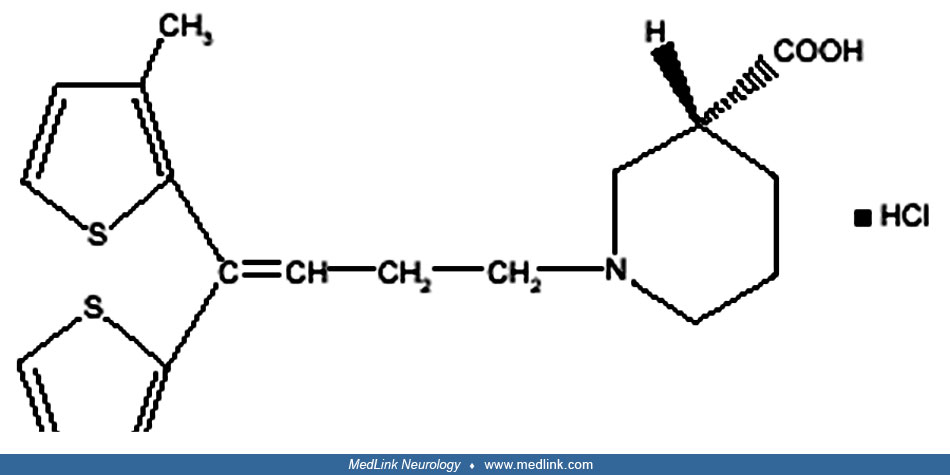 Pharmacodynamics. The precise mechanism of the antiseizure effect of tiagabine is unknown, although it is believed to be related to its ability to enhance the activity of GABA, the major inhibitory neurotransmitter in the CNS. Tiagabine binds to recognition sites associated with the GABA uptake carrier and blocks GABA uptake into presynaptic neurons, permitting more GABA to be available for receptor binding on the surfaces of postsynaptic cells. Inhibition of GABA uptake has been shown for synaptosomes, neuronal cell cultures, and glial cell cultures. Tiagabine increases the amount of GABA available in the extracellular space of the globus pallidus and substantia nigra.

Experimental studies have shown neuroprotective effect of tiagabine pretreatment on the nigrostriatal axis by attenuation of microglial activation in a neurotoxin-induced mouse model of Parkinson disease (08). This finding indicates a potential application of tiagabine for treatment of Parkinson disease. Theoretically, GABA transporter blockade by drugs such as tiagabine offers an indirect approach to increase GABA inhibition to lower the excitation threshold of neurons following cerebral ischemia for neuroprotective effect. A study of several drugs on a mouse model of cerebral ischemia showed that low dose tiagabine improved motor recovery, but higher doses induced seizures, and none of the drugs reduced infarct volume (07). These findings indicate that tiagabine should be used with caution in cases of cerebral ischemia.

The pharmacokinetics of total and unbound tiagabine are unaffected in subjects with renal failure requiring hemodialysis.

The Cochrane Database Systematic Review of Controlled Clinical Trials concluded that tiagabine reduced seizure frequency, but was associated with some adverse effects when used as an add-on treatment in patients with drug-resistant focal epilepsy (02).

Tiagabine hydrochloride is indicated as adjunctive therapy in the treatment of partial seizures in adults and children 12 years and older.

Tiagabine is contraindicated in patients who have demonstrated hypersensitivity to the drug or its ingredients.

The aim is control of partial seizures by reduction in frequency. Dosage adjustment may be necessary, and the drug can be used for an indefinite period. Results of an open, prospective study of effectiveness of tiagabine in Bulgarian patients with drug-resistant epilepsy showed low and transient improvement of seizure severity, good and stable improvement of seizure frequency, possible appearance of new seizure types, and acceptable safety (14).

In patients with moderate hepatic impairment, clearance of unbound tiagabine is reduced by about 60%. These patients may require reduced initial and maintenance doses of tiagabine or longer dosing intervals compared patients with normal hepatic function.

Pediatric. Tiagabine has not been investigated in adequate and well-controlled clinical trials in patients below the age of 12 years.

Geriatric. The pharmacokinetic profile of tiagabine is similar in healthy elderly and healthy young adults.

Pregnancy. Because teratogenic effects were seen in the offspring of rats exposed to maternally toxic doses of tiagabine, and because experience in humans is limited, patients should be advised to notify their physicians if they become pregnant or intend to become pregnant during therapy. Because of the possibility that tiagabine may be excreted in breast milk, and because there is limited published experience with tiagabine during breastfeeding, other antiepileptic agents may be preferred.

Anesthesia. No adverse interaction with anesthetic agents have been reported

The clearance of tiagabine is affected by the coadministration of hepatic enzyme-inducing antiepilepsy drugs leading to more rapid clearance and loss of efficacy. Acute tiagabine toxicity due to raised serum levels due to pharmacokinetic drug interaction with concomitantly administered gemfibrozil has been reported (03).

Adverse events most often associated with the use of tiagabine are related to the central nervous system. The most significant of these can be classified into 2 general categories: (1) impaired concentration, speech or language problems, and confusion (effects on thought processes); and (2) somnolence and fatigue (effects on level of consciousness). Patients with a history of spike and wave discharges on EEG have been reported to have exacerbations of their EEG abnormalities associated with these cognitive and neuropsychiatric events. Tiagabine-related stupor has been reported in a few cases and may represent a form of toxic encephalopathy (01). Tiagabine-induced myoclonic status epilepticus has been reported in a nonepileptic patient. For details of adverse events, see the Physicians’ Desk Reference.

In 2005 and 2008, the FDA issued warnings on the risk of seizures in nonepileptic and increased suicide ideation with use of tiagabine. A retrospective review of all single substance tiagabine exposures in the National Poison Data System showed a significant decline of reported cases between 2005 and 2006 and no deaths, reflecting the drop in sales of the drug following warnings (10). Clinical manifestations of reported cases were mainly neurologic, with suicide attempts as the most frequent, and the majority were treated at a healthcare facility.

Management. Most of the neurologic adverse reactions can be resolved by reduction of dose or discontinuation of tiagabine.