Zonisamide is chemically classified as a sulfonamide and is unrelated to other antiepileptic drugs. Originally developed in Japan for the treatment of epilepsy, it was later approved in 1989, and has since been licensed in many countries. It was under investigation for cerebral ischemia, but no development has been reported for this indication since 1994. Zonisamide was approved by the Food and Drug Administration in 2000 for marketing as an add-on adult focal epilepsy treatment. It is now approved in Europe as monotherapy for the treatment of partial seizures in adults affected by newly diagnosed epilepsy. 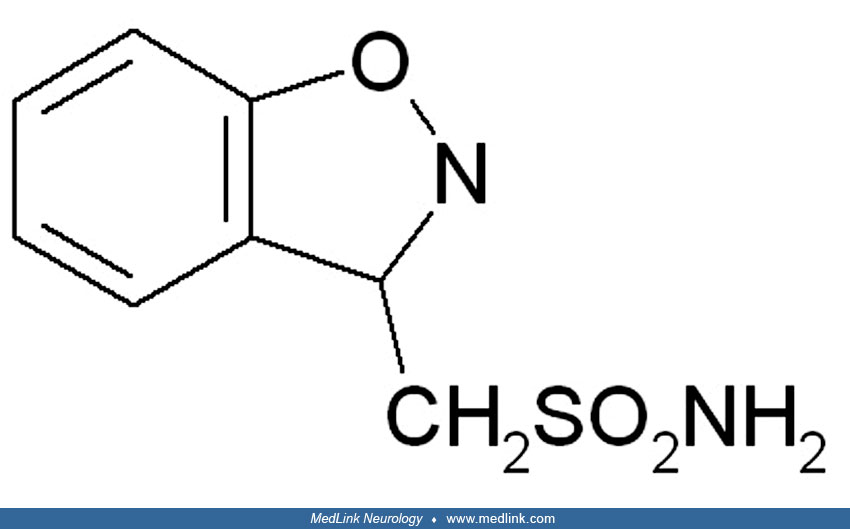 Pharmacodynamics. The mechanism of the antiepileptic action of zonisamide remains unclear, but likely mechanisms include:

Zonisamide does not potentiate the synaptic activity of gamma-aminobutyric acid. In experimental animals, zonisamide suppresses the tonic-extensor components of maximal electroshock seizures and prevents the propagation of seizures from the cortex to the subcortical structures evoked by cortical freezing. Electroencephalographic studies on animal models of epilepsy show that zonisamide, like phenytoin and carbamazepine, restricts the spread or propagation of seizures and, like sodium valproate, suppresses the epileptogenic focus activity. Neuroprotective effect of zonisamide has been demonstrated in the rat model of focal ischemia induced by a transient occlusion of the left middle cerebral artery. One explanation of this neuroprotective effect is by scavenging of free radicals. Another explanation is that zonisamide is effective in reducing neuronal damage by a mechanism involving decreased ischemia-induced extracellular glutamate accumulation and interruption of excitotoxic pathways (14). As therapeutic concentrations of zonisamide positively modulate recombinant and native glycine receptors, anticonvulsant effects of zonisamide may be mediated via this action (05).

Routes of administration. Zonisamide is marketed as tablets for oral use. A liquid formulation for intravenous use is available. Preclinical studies of intranasal zonisamide show that drug targeting efficiency and direct transport percentage into the brain are 149.54% and 33.13%, respectively, indicating that a significant fraction of zonisamide is transported directly from the nose to the brain (09). Zonisamide has a low absolute bioavailability (54.95%) but the highest value of the ratio between the area under the curve (AUC) between brain and plasma, suggesting lower systemic adverse events and noninferior effects on central nervous system compared to intravenous and oral routes.

A clinical retrospective study of zonisamide as adjunctive therapy in children with epilepsy that was not responding to other antiepileptic drugs found that it was an effective and safe treatment (16).

A randomized, multicenter trial has compared low-dose (3 to 4 mg/kg/day) or high-dose zonisamide (6 to 8 mg/kg/day) in childhood epilepsy (08). Lower doses of zonisamide had a similar efficacy and more beneficial neurocognitive effects compared to higher doses, which interfere with language development.

Four key phase III clinical trials as well as subsequent postmarketing trials that have expanded the therapeutic indication for zonisamide are reviewed in detail in a publication (11). Clinical data support zonisamide as a viable first-line and adjunctive therapy for partial-onset epilepsy.

Results of a phase III, randomized, double-blind, parallel-group, clinical trial showed that zonisamide was non-inferior to controlled-release carbamazepine and could be useful as an initial monotherapy for patients newly diagnosed with partial epilepsy (01).

A systematic review of clinical trials showed that zonisamide is effective as an add-on treatment in patients with focal epilepsy uncontrolled by one or more concomitant antiepileptic drugs, and there was moderate-quality evidence that zonisamide was more successful than placebo at reducing the frequency of seizures by at least 50% (02).

Zonisamide is indicated for the treatment of partial seizures in adults with epilepsy.

West syndrome. Zonisamide has been used with some success in patients who did not respond to pyridoxine or valproic acid.

Absence epilepsy. A post-marketing study has shown that add-on zonisamide is efficient and well tolerated in juvenile patients with refractory absence epilepsy (31).

Tremor. Zonisamide reduces tremor amplitude and has been used for controlling essential tremor involving the head (29). A systematic review of randomized controlled trials concluded that there is insufficient evidence to assess the efficacy and safety of zonisamide as treatment for essential tremor (03).

Obesity. Weight loss was originally noted as an adverse effect of zonisamide but has been investigated for therapeutic use in obesity.

Migraine. Zonisamide has been used for preventive treatment of chronic migraine in patients who are refractory or intolerant to topiramate (32). In another study on refractory migraine patients, zonisamide therapy did not result in a statistically significant beneficial effect on headache or on associated symptoms.

Zonisamide is an effective prophylactic treatment for patients with chronic and episodic cluster headache disorders (17).

Brain tumor-related epilepsy. Preliminary results of an open study of zonisamide as add-on in a patient population indicate that it may represent a valid alternative to other add-on antiepileptic drugs (19).

Alcohol dependence. In an open-label study, zonisamide was found to be well tolerated and associated with improvement in alcohol craving (28).

Catatonia. Refractory periodic catatonia in a patient with schizophrenia was successfully treated with a combination of zonisamide and aripiprazole -- a partial agonist of dopamine D2 receptor (22).

Bulimia nervosa. In an open-label study, zonisamide was effective in bulimia nervosa but was associated with a high discontinuation rate (10).

Bipolar disorder. Zonisamide may be useful as an adjunctive therapy for the management of acute phases and weight gain in bipolar disorder (04).

Zonisamide is contraindicated in patients who have demonstrated hypersensitivity to sulfonamides or zonisamide.

Zonisamide is added when the older established antiepileptic drugs fail to control the seizures. The dose is increased until the seizure control is reached. High doses of zonisamide are effective and safe in pharmacoresistant epileptic patients, but therapeutic drug monitoring is recommended (20). Long-term maintenance therapy is possible if no serious adverse reactions occur. The long-term effectiveness of zonisamide in West syndrome has been shown in follow-up from 24 to 79 months (30). Zonisamide, as monotherapy or adjunctive therapy, has been demonstrated to be safe, effective, and well tolerated as a long-term treatment option in patients with various seizure types. Zonisamide has a good safety profile and sustained efficacy in the long-term adjunctive treatment of refractory partial epilepsy.

Pregnancy. Women of childbearing age who are given zonisamide should be advised to use effective contraception. Zonisamide was teratogenic in mice, rats, and dogs and embryolethal in monkeys when administered during the period of organogenesis. These findings suggest that the use of zonisamide during pregnancy in humans may present a significant risk to the fetus. Zonisamide should be used during pregnancy only if the potential benefit justifies the potential risk to the fetus. Zonisamide serum concentrations may fall by more than 40% during pregnancy, which may worsen seizure control, and therapeutic drug monitoring with dose adjustments are useful measures to cope with this (26). Zonisamide concentration in breast milk is the same as that in maternal plasma, but serum levels in neonates decrease during the first month of life during nursing. Alternative drugs are preferred, but if zonisamide must be given, the infant should be monitored for drowsiness, adequate weight gain, and developmental milestones.

Pediatric. Use of zonisamide is safe in children less than 16 years of age, and the adverse event profile is like that of adults in studies in the United States and Europe.

An extension study of a phase 3 trial showed that approximately one-third of children treated with zonisamide had 5% or greater weight loss, but it was not associated with any effects on growth and development (15).

Geriatric. Single-dose pharmacokinetic parameters are similar in healthy volunteers of all ages. Other reported clinical experience has not identified differences in responses between the elderly and younger patients. In general, dose selection for an elderly patient should be cautious, usually starting at the low end of the dosing range, reflecting the greater frequency of the decreased.

However, data from uncontrolled studies suggest that zonisamide is effective and well tolerated when administered as monotherapy or adjunctive antiepileptic treatment in the elderly (27).

Zonisamide has not been associated with elevations in serum aminotransferase levels, and clinically apparent drug-induced liver disease has been reported with its use but is very rare. Frequent adverse events (ataxia, somnolence, agitation, irritability, and anorexia) were significantly associated with zonisamide in clinical trials. Other reported adverse effects are:

Kidney stones. The available data suggest that the risk of developing renal calculi during zonisamide treatment is low.

Oligohidrosis and hyperthermia in children. Zonisamide may cause decreased sweating, which may be accompanied by elevated body temperature, especially in the summer. Body temperature should be carefully monitored and recovery from hyperthermia should follow discontinuation of zonisamide.

Neuropsychiatric adverse events. The most significant of these are depression, psychomotor slowing and difficulty with concentration, and psychosis. Visual hallucinations have been associated with zonisamide. The risk of psychotic episodes is higher in younger patients. Although the relation of psychotic episodes to zonisamide therapy cannot be proven, particularly in patients with polytherapy, it is recommended that zonisamide be discontinued if this adverse reaction appears.