The term transient global amnesia describes what happens in an attack and was coined in the 1950s because no one could confidently explain the mechanism.

Transient indicates that what happens is brief and, importantly, that the symptoms resolve completely.
Global means that the loss of memory is severe and often total.
Amnesia means a loss of memory.

Manifestations
Because a transient global amnesia episode or 'attack' is defined by its severe amnesia, what happens during the attack can only be described by a witness, as the patient has no recollection of the event. Here's an example: a taxi driver remembers having breakfast, picking up a passenger outside a suburban train station at about 9 AM, and then next 'comes to' in his taxi, alone, at 4.30 PM on the other side of town. He anxiously checks his vehicle and his money and to his amazement, deduces that he has driven his taxi more than 100 miles in the last several hours, without any evidence of an accident, probably picking up other passengers as he has taken more than $320 in fares.

A witness will typically describe that the person with transient global amnesia suddenly begins to act strangely and appears confused and disorientated. An example is a daughter who leaves her elderly father at home in bed early in the morning and comes home at lunch to find her father walking around the house completely confused and disoriented. He begins to ask repeated questions about "why...." and "when...." and "how...." Her father has no recollection of what has happened and can't even recall getting out of bed. Yet it is obvious to the daughter that her father has safely arisen from his bed, there is evidence that he has showered, and he is dressed appropriately and shaved. There is a fry pan on the stove, a dirty plate in the sink, and a half-full coffee pot. All this seems to have occurred without any mishap or catastrophe. She takes him to the Emergency Room, and within 4 hours he slowly recovers his orientation and his memory, but he has absolutely no recall of his life from the time he went to bed the night before until about 11.30 am that morning in the hospital.

It is important to emphasize the following characteristics: 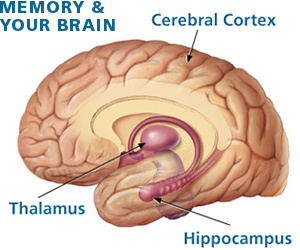 The difficulty in trying to explain transient global amnesia is how a process or mechanism would selectively depress or inhibit the action of the hippocampus and not affect any other parts of the brain. It can't be a simple reduction in the blood supply to the organ. Something seems to depress the metabolism of that part of the brain in a way similar to the depression of the brain that causes the 'aura' of a severe migraine. At present this is the best theory: that there is a sudden inhibition of the nerve cells in the hippocampus and that this inhibition seems to spread throughout the hippocampus on both sides of the brain, almost like the ripples that spread out after a stone is thrown into a pool of calm water. The most plausible theory to date is that transient global amnesia is an unusual form of prolonged, migraine-like aura.

Differential diagnosis
The most important complicating issues to consider, especially in the older patient, are that the confusion is a side effect of medication, or alcohol, or a prolonged confusion after an unrecognized partial seizure. Or it may be a psychological episode, a fugue-like state as a consequence of unrecognized stress.

This information was written by Graham Norton FRACP, and is herewith used with permission. It was last reviewed February 1, 2013.