Most of the drugs for the treatment of attention-deficit/hyperactivity disorder (ADHD) have been CNS stimulants in the past. Originally called tomoxetine, the drug's name was changed to atomoxetine to avoid any potential confusion with the anticancer drug tamoxifen that might lead to dispensing errors. Atomoxetine is not a controlled substance in the United States. It is the first nonstimulant approved by the FDA for the treatment of ADHD in children, adolescents, and adults.

Atomoxetine is a selective norepinephrine reuptake inhibitor. The molecular formula is C17H21NO•HCl. 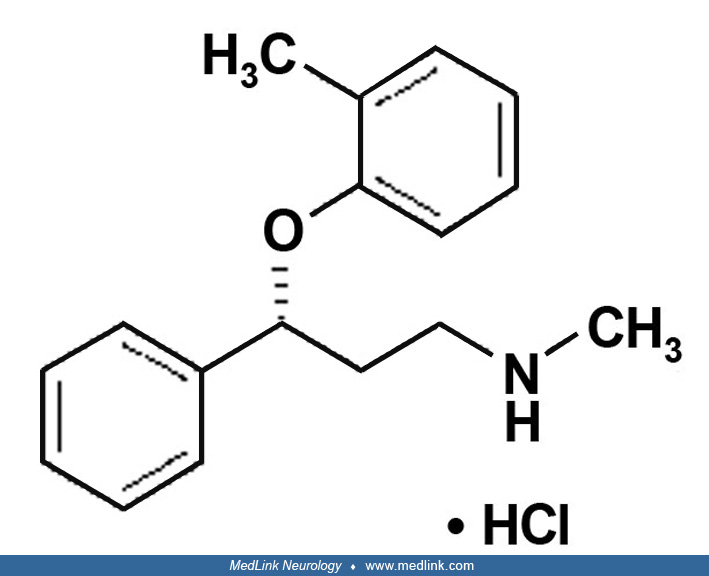 Pharmacodynamics. The exact mechanism by which atomoxetine produces its therapeutic effects in ADHD is unknown, but it is likely by selective inhibition of the presynaptic norepinephrine transporter, as determined by ex vivo uptake and neurotransmitter depletion studies. It has little or no affinity for other noradrenergic receptors or other neurotransmitter transporters or receptors.

In experimental studies, atomoxetine has been shown to block N-methyl-d-aspartate receptors, which may be relevant to its clinical effects in the treatment of ADHD, as altered glutamatergic transmission might play a role in ADHD (17).

Use of stop-signal functional MRI on healthy volunteers has shown that atomoxetine exerts its beneficial effects on inhibitory control in ADHD via modulation of right inferior frontal function (06). Atomoxetine is associated with increased fMRI activation of dorsolateral prefrontal cortex, parietal cortex, and cerebellum, but not dorsal anterior midcingulate cortex (03). A randomized clinical trial using functional near-infrared spectroscopy to monitor the oxy-hemoglobin signal changes of ADHD in children has shown that activation in the right inferior and middle prefrontal gyri could serve as an objective neurofunctional biomarker to indicate the effects of atomoxetine on inhibitory control in ADHD (18). Although these effects are like those of methylphenidate, they are not identical.

Pharmacokinetics. The pharmacokinetics of atomoxetine patients has been well characterized over a wide range of doses and is similar in pediatric patients and adult subjects after adjustment for body weight. Important features are:

Pharmacogenetics. Genetic polymorphisms of CYP2C19 have a significant effect on the pharmacokinetics of atomoxetine (08). Plasma levels of atomoxetine are markedly raised in subjects with mutations of the CYP2D6 gene, increasing the risk of concentration-related adverse events of atomoxetine (04). Atomoxetine needs to be adjusted for individuals who are CYP2D6 poor metabolizers, individuals who are taking a strong CYP2D6 inhibitor (eg, paroxetine, fluoxetine, and quinidine), and individuals with moderate or severe hepatic impairment. However, various regulatory authorities have different dosing recommendations. For CYP2D6 poor metabolizers, the Clinical Pharmacogenetics Implementation Consortium recommends that if no clinical response is observed after 2 weeks of atomoxetine therapy, then a plasma concentration exposure check be used with an individual’s CYP2D6 genotype to help clinicians guide dose selection and titration (02).

The effectiveness of atomoxetine in the treatment of ADHD was established in several randomized, double-blind, placebo-controlled studies of pediatric and adolescent patients with ADHD. The trials started in 2004, but only those conducted within the last 10 years are reviewed in this article.

Analysis of pooled data from 5 clinical trials revealed that atomoxetine was effective in improving some aspects of health-related quality of life in ADHD without any significant differences across genders in boys and girls (28).

Atomoxetine is indicated for the treatment of ADHD.

Atomoxetine is indicated as an integral part of a total treatment program for ADHD that may include other measures (psychological, educational, and social) for patients with this syndrome. Long-term efficacy, safety, and tolerability of atomoxetine for the treatment of adult ADHD has been shown in several studies. Whereas many adults with ADHD respond relatively rapidly to atomoxetine, others respond more gradually without a clear plateau at 24 weeks, indicating that longer duration of treatment may increase the number of responders (24). In a retrospective study, children who were prescribed a stimulant medication in addition to atomoxetine had better outcomes in ADHD than those receiving only atomoxetine (21). A comprehensive metaanalysis of studies of parent-rated outcomes has shown that atomoxetine produces significant improvement in core symptom of ADHD and is a viable option for treatment (12).

In children and adolescents over 70 kg body weight and adults, atomoxetine should be initiated at a total daily dose of 40 mg and increased after a minimum of 3 days to target total daily dose of approximately 80 mg administered either as a single daily dose in the morning or as evenly divided doses in the morning and late afternoon or early evening. After 2 to 4 additional weeks, the dose may be increased to a maximum of 100 mg in patients who have not achieved an optimal response.

Atomoxetine exposure is increased in hepatic insufficiency and dosage adjustment is recommended. Initial target doses should be reduced to 25% and 50% of the normal dose for patients with severe and moderate hepatic impairment, respectively. Whether final adult height or weight is affected by treatment with atomoxetine is unknown. Patients requiring long-term therapy should be monitored and therapy should be interrupted in patients who show impaired growth or satisfactory weight gain.

Geriatric. The pharmacokinetics of atomoxetine has not been evaluated in the geriatric population.

Pregnancy. No adverse fetal effects were seen when pregnant rats were exposed to atomoxetine throughout the period of organogenesis. No adequate and well-controlled studies have been conducted in pregnant women. Atomoxetine should not be used during pregnancy unless the benefits justify the potential risk to the fetus. Atomoxetine and its metabolites are excreted in the milk of rats. It is not known if atomoxetine is excreted in human milk. Caution should be exercised if atomoxetine is administered to a nursing woman.

Anesthesia. No adverse interaction of Atomoxetine with anesthetic agents has been reported so far.

No significant interactions with commonly prescribed drugs are known. Atomoxetine administration with substrates of CYP2D6 and CYP3A does not result in clinically significant drug interactions. Atomoxetine administration does not inhibit or induce the clearance of other drugs metabolized by cytochrome P enzymes. Coadministration of methylphenidate with atomoxetine does not increase cardiovascular effects beyond those seen with methylphenidate alone. Although atomoxetine has noradrenergic activity, increases in pulse and blood pressure are small and of little clinical significance. Cardiovascular effects of atomoxetine were minimal, and atomoxetine was well tolerated in short- and long-term studies.

Concomitant use with MAO inhibitors can produce serious, sometimes fatal, reactions. Albuterol induces increases in heart rate and blood pressure. These effects are potentiated by atomoxetine.

The most common side effects of atomoxetine are headache, abdominal pain, loss of appetite, nausea, vomiting, and vertigo. These effects are usually temporary and do not require reduction of dose. Use of atomoxetine has been associated with persistent camptocormia, which is characterized by forward flexion of the spine when standing or walking (01).

Atomoxetine has significantly less abuse liability than methylphenidate or phentermine and no greater abuse liability than desipramine. Patients with ADHD can be safely switched from neurostimulants, specifically methylphenidate, to atomoxetine and may benefit from symptom improvement. There is no evidence of symptom rebound or adverse events suggesting a drug-discontinuation or withdrawal syndrome. Children with ADHD may be at risk for seizures but use of atomoxetine does not appear to elevate this risk further. A black-box warning for suicidal ideation has been published in the United States prescribing information, based on findings from a meta-analysis showing that atomoxetine is associated with a significantly higher incidence of suicidal ideation than placebo. Atomoxetine has been reported to induce bruxism that improves by treatment with buspirone (30). An adult with ADHD developed a delusional state during treatment with atomoxetine, which resolved after discontinuation of the drug and antipsychotic (15). A middle-aged man with acute intracerebral hemorrhage in the right pons and midbrain, who was treated with atomoxetine once daily to improve cognitive impairment, suddenly developed episodes of uncontrollable and inappropriate laughter, which resolved after discontinuation of the drug (19). Rarely, atomoxetine may cause complex partial seizures with transient hypoperfusion of the temporal, parietal, and occipital lobes shown on MRI as well as focal slowing and spikes and sharp waves in EEG, which resolve on discontinuation of the drug (11).

Other adverse events include reversible drug-induced liver injury and hypertension in patients with impaired autonomic function. For a detailed listing of the adverse events, see the Physicians’ Desk Reference.