The author explains the clinical presentation, etiology, differential diagnosis, and diagnostic workup of progressive subcortical gliosis, a chromosome-17-linked dementia with unique pathologic features. Microscopically, the major pathologic change is a marked fibrillary astrocytosis, particularly in the area of the short cortical association tracts at the junction of cortical lamina VI and the subcortical white matter and in the subpial cerebral cortex. Overall, the survival of patients with progressive subcortical gliosis averages about 10 years and is similar to that of other types of frontotemporal dementia.

Although rare reports of familial cases were reported beginning in the 1940s, it was not until the late 1980s and 1990s that it was recognized that progressive subcortical gliosis could be transmitted as an autosomal dominant trait (16; 36). Progressive subcortical gliosis was linked to a tau mutation in the microtubule-associated protein tau (MAPT) gene on the long arm of chromosome 17 (54; 24) and, thus, it was included in the group of "frontotemporal dementias and Parkinsonism linked to chromosome 17" group (FTDP-17) (21; 10). More than 60 MAPT mutations have since been identified, usually causing behavioral variant frontotemporal dementia (FTD) and/or parkinsonism clinically (58).

The concept of "frontotemporal dementias and Parkinsonism linked to chromosome 17" has since been challenged (19). Review of known cases suggested that distinct MAPT mutations result in particular tau subtypes linked to frontotemporal lobar degeneration (FTLD). As such, Forrest and colleagues argued, FTLD-tau cases with MAPT mutations should be considered familial forms of FTLD-tau subtypes rather than a separate FTDP-17 category.

Progressive subcortical gliosis has an insidious onset, generally in the fifth or sixth decade, although individuals have developed the disease as early as 30 years and as late as 79 years (36; 38). The distribution of age of onset is similar for familial and sporadic cases. There is no apparent gender predilection.

The course is progressive, generally over 5 to 15 years, but both fulminant (3 months to 2 years) and protracted (spanning decades) courses occur. The duration of illness is generally longer in familial cases than in sporadic cases. The most common causes of death are pneumonia, other respiratory infections, and pulmonary emboli.

Overall, the survival of patients with progressive subcortical gliosis is similar to that of other types of frontotemporal dementia (13).

At age 50, the patient had decreased verbal fluency, mild comprehension impairment, and word-finding difficulty with semantic paraphasic errors. Over the next several years, he became more compulsive, regimented, and perseverative. His affect became progressively blunted. He lost interest in sexual intercourse, was incontinent, and began eating excessively. He stopped speaking spontaneously but had prominent echolalia. Later he developed severe dysphagia and became bed-bound and emaciated. He died at age 58 years from aspiration.

Lanska and colleagues subsequently confirmed these findings in a second kindred of 80 individuals spanning four generations.

10 members of 30 members in three consecutive generations may have been affected by the disease, and two siblings were proved to have been affected on the basis of autopsy (37; 36). In 1995, Petersen and colleagues suggested that familial progressive subcortical gliosis may be a prion disease (54), but this conclusion was later retracted (22).

Linkage has been demonstrated in one of the kindreds reported by Lanska and colleagues (36) to a region on the long arm of chromosome 17 (17q21-22) (54; 20; 21; 75), a site previously associated with the disinhibition-dementia-parkinsonism-amyotrophy complex (40; 74; 75). As early as 1995, it was recognized that candidate genes in the region include microtubule-associated protein tau (MAPT) (54). Subsequently, a tau mutation at position +16 of the intron after exon 10 has been identified (24) in one kindred with progressive subcortical gliosis (36; 54). The mutation destabilizes a predicted stem-loop structure and leads to an overrepresentation of the soluble 4-repeat tau isoforms that assemble into wide, twisted, ribbon-like filaments. Overproduction of 4-repeat tau is probably the primary effect of the progressive subcortical gliosis mutation. It may lead to an excess of 4-repeat tau over available binding sites on microtubules, resulting in the hyperphosphorylation of tau and its assembly into filaments (35).

Some other conditions included in the "frontotemporal dementias and Parkinsonism linked to chromosome 17" group (21), but with clinicopathologic differences from progressive subcortical gliosis (21; 41), have mutations in the tau gene (59; 62; 73; 50; 52). Several studies have identified various missense mutations, silent mutations, and amino acid deletions in the tau gene in patients with frontotemporal dementias (63; 64; 65; 39). Mutations have also been described at positions +3, +12, +13, +14, and +16 of the intron after exon 10 of the tau gene, and at the intron 10+11-splice site (60; 14; 39). Detailed tau pathology has been reported for the kindred with the +3 mutation, also known as “familial multiple system tauopathy with presenile dementia” (61; 60); affected individuals have neuronal and glial tau pathology similar to that of progressive subcortical gliosis. It is also characterized by the presence of wide, twisted ribbons made of 4-repeat tau isoforms and an overproduction of soluble 4-repeat tau, indicating that the different mutations in the intron after exon 10 cause disease through the same mechanism. These findings firmly establish that the overproduction of 4-repeat tau alone is sufficient to lead to filamentous tau pathology and a dementing disease (63).

How changes in the ratio of 3-repeat tau to 4-repeat tau produce neuronal and glial dysfunction and cell death is unknown. 3-repeat tau and 4-repeat tau may bind to distinct microtubule sites, and an altered ratio of these isoforms may disrupt microtubule function (63; 39). Also, overproduction of 4-repeat tau may simply produce an excess of free cytosolic tau, which then becomes hyperphosphorylated and is assembled into pathologic filaments (39). Other mutations alter the binding of tau to microtubules and interfere with its ability to promote microtubule assembly (63; 39).

The existence of tau mutations with distinct pathogenetic mechanisms may explain the phenotypic heterogeneity of atypical dementias that previously led to their classification into separate disease entities.

Another kindred with autosomal dominant subcortical gliosis presenting as a frontotemporal dementia, but without tau- or ubiquitin-containing inclusions and without ubiquitin or TDP-43 staining, has been reported by Swerdlow and colleagues (67). Symptom onset was generally in the fifth or sixth decade, but some individuals did not become symptomatic until their eighth decade. The TDP-43 type C form of frontotemporal lobar degeneration is characterized by the presence of immunoreactive TDP-43 dystrophic neurites, neuronal cytoplasmic inclusions, neuronal loss, and gliosis, and the absence of neuronal intranuclear inclusions (29).

The brains of progressive subcortical gliosis cases are moderately to severely atrophic, usually with preferential involvement of the white matter of the frontal and temporal lobes (36), but several cases affected mainly the frontal lobes, and one sporadic case affected predominantly the parietal and occipital lobes (05; 04). Most often the atrophy is symmetric (36), but in several cases, one side was more affected than the other (47; 77; 56; 71).

Microscopically, the major pathologic change is a marked fibrillary astrocytosis, particularly in the area of the short cortical association tracts at the junction of cortical lamina VI and the subcortical white matter and in the subpial cerebral cortex (48; 56; 42; 57; 71; 36).

This gliosis is most pronounced in the frontal and temporal lobes, occurs in the absence of identifiable myelin loss, and is out of proportion to the mild neuronal loss in the cortex (71; 36). Lesser degrees of gliosis are observed in the deep white matter, basal ganglia, thalamus, brainstem tegmentum, cerebellum, and central gray matter of the upper cervical spinal cord (36). In addition, variable protoplasmic astrocytic proliferation is evident in all layers of the cerebral cortex (56; 42; 57; 06; 36).

Laminar spongiosis has been variably reported in laminae II and III of the cerebral cortex in cases of progressive subcortical gliosis (48; 56; 42; 57; 71; 36).

The spongiosis may be focal and probably occurs late in the disease. It generally spares the deeper layers of the cortex, as well as the basal ganglia, thalamus, brainstem, and cerebellum (36). Ultrastructural studies have shown areas of clarification and frequent vacuoles in large postsynaptic dendrites surrounded by glycogen and mitochondria (42). This spongiosis has been attributed variously to neuronal loss, loss of dendritic arborizations of neurons that expand in the second layer, and pathologic alteration and disintegration of astrocytes (42; 57; 71). The spongiosis of progressive subcortical gliosis is similar to that in other neurodegenerative diseases (eg, Pick disease, Alzheimer disease), but it differs from the spongiform change of Creutzfeldt-Jakob disease, which is pancortical, most prominent in the deeper layers, and frequently involves the thalamus, basal ganglia, brainstem, and cerebellum (43; 36).

Neuronal cytoskeletal inclusions (Pick bodies, neurofibrillary tangles, Lewy bodies) are absent in progressive subcortical gliosis (36). Several cases had occasional balloon neurons in the cerebral cortex (47; 77); however, most authors did not identify such cells. Although considered one of the histopathologic hallmarks of Pick disease (51), balloon neurons are nonspecific and do occur in several other neurodegenerative disorders.

In several cases, the pars compacta of the substantia nigra exhibited moderate to marked degenerative changes (36). There was no apparent neuronal loss or gliosis in the nucleus basalis of Meynert in the cases wherein this was examined (36).

Studies in a transgenic mouse model of frontotemporal dementia and parkinsonism linked to chromosome 17 indicate that the L-dopa-resistant parkinsonism in this tauopathy results from early loss of dopaminoreceptive neurons in the striatum (12). Accumulation of mutant tau leads to neurofibril degeneration and apoptosis through caspase-3 activation (12). In the late stages, dopaminergic neurons and dopaminoreceptive neurons decreased equally (12).

Alterations in pro-nerve growth factor and brain-derived neurotrophic factor have been identified in non-Alzheimer disease tauopathies (03). Neurotrophin dysregulation as a result of tau pathology may represent a mechanism by which tau produces neurotoxicity in progressive subcortical gliosis and other non-Alzheimer dementias (03).

Even though the hippocampus is not the primary pathologic site in progressive subcortical gliosis and other tauopathies, there are nevertheless disease-specific regional selective neuronal vulnerabilities that can be demonstrated in the hippocampus for these disorders (45).

Compared with other forms of frontotemporal dementia (27; 30), progressive subcortical gliosis appears to have a distinctive clinicopathologic profile (36; 21; 41), but several specific forms of frontotemporal dementia, including progressive subcortical gliosis, have now been linked to chromosome 17 (21; 14).

Thalamic degenerations involve similar neural structures and have histopathologic similarities to progressive subcortical gliosis (49; 06; 36). Primary thalamic degenerations are frequently accompanied by secondary gliosis in the cerebral cortex, subcortical white matter, basal ganglia, and various brainstem nuclei. Thalamic gliosis and neuron loss occur in progressive subcortical gliosis (77; 48; 06); however, they apparently develop independently of the other pathologic changes, because: (1) there is prominent gliosis of the short ipsilateral cortical association fibers that have no direct thalamic connections; (2) there is neither demyelination nor axon loss in the thalamic radiations; (3) gliosis in the cerebral cortex generally spares laminae III and IV, where the majority of thalamocortical projection fibers terminate (36). 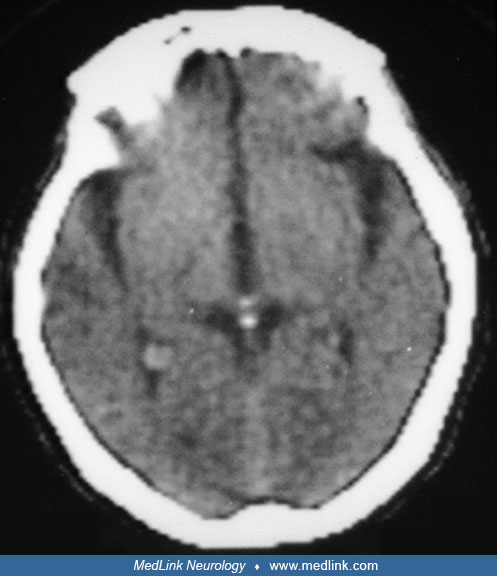 Brain MRI may show hyperintensities in the subcortical white matter on T2-weighted images (18). Electroencephalograms remain normal except for mild slowing late in the illness. Screening for tau gene mutations in patients with frontotemporal dementia is still largely a research tool and is unlikely to identify pathogenic mutations in sporadic cases (65).

Management is supportive. Although antipsychotic medications have been used to control hallucinations and paranoia, such agents may increase the extrapyramidal dysfunction that is commonly present in the later stages of the disorder.