Since its demonstration of effectiveness against Parkinson disease in 1961, levodopa has become the mainstay therapy for this disease. However, most orally administered levodopa is converted by catechol-O-methyltransferase into the inactive metabolite 3-O-methyldopa before crossing the blood-brain barrier. The accumulated 3-O-methyldopa then competes with levodopa for the saturable neutral amino acid active transport system in the gut and blood vessel wall, leading to motor fluctuations. The purpose of catechol-O-methyltransferase inhibitors such as entacapone and tolcapone is to inhibit the action of this enzyme.

Opicapone is a novel, long-acting, peripherally selective, once-daily, third-generation catechol-O-methyl transferase inhibitor that was approved in the European Union in 2016 as an alternative to tolcapone. It reduces OFF time without increasing ON time with troublesome dyskinesias and has a good drug safety profile (06).

The chemical name of tolcapone is 3,4-Dihydroxy-4'-methyl-5-nitrobenzophenone. 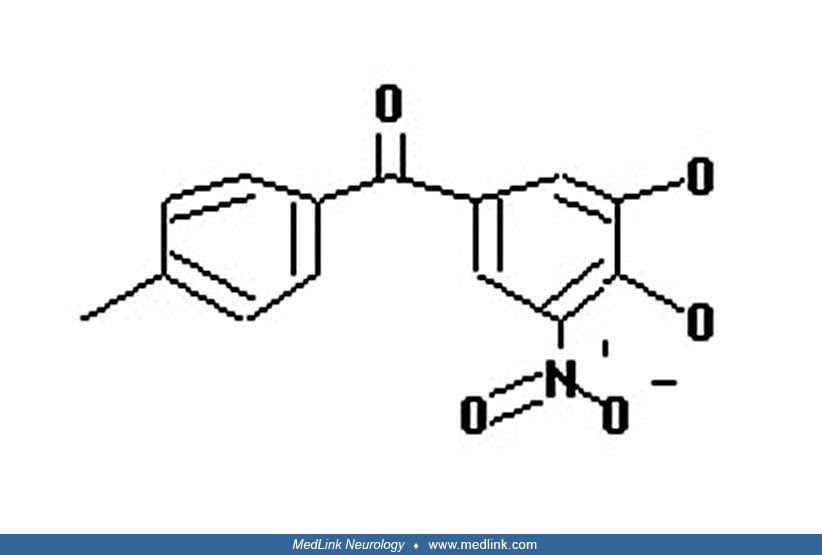 Pharmacodynamics. Tolcapone inhibits the action of the enzyme catechol-O-methyltransferase, which acts to metabolize or degrade catechols that include dopamine, adrenaline, and noradrenaline. Catechol-O-methyltransferase, found in the synaptic cleft of dopaminergic neurons, is the second most significant metabolic pathway for levodopa. O-methylation reactions may influence the response to levodopa in Parkinson disease by the following mechanisms:

In healthy volunteers, 200 mg doses of tolcapone significantly reduce erythrocyte catechol-O-methyltransferase activity with maximum inhibition at 2 hours that returns to baseline levels within 24 hours. Tolcapone significantly increases the levodopa and dopamine concentrations (80% and 92% respectively) in patients with Parkinson disease and reduces 3-O-methyldopa levels by 80% when given at a dose of 200 mg 3 times daily along with levodopa/carbidopa. Clinical improvement with levodopa under tolcapone can be fully explained by tolcapone-induced changes of peripheral levodopa pharmacokinetics and excludes any central effects of tolcapone on dopa decarboxylase.

Tolcapone is an uncoupler of mitochondrial respiration in isolated mitochondria and markedly inhibits ATP synthesis. This action may be relevant to its effect on liver function, but its toxicity may also involve a mechanism independent of its effects on oxidative phosphorylation.

Pharmacokinetics. Tolcapone is rapidly absorbed when given orally and is rapidly eliminated with a mean half-life of approximately 2 hours. Tolcapone is metabolized to 3-O-methyl-tolcapone, which has an elimination half-life of approximately 30 hours. Bioavailability of tolcapone is 60% following oral administration due to first pass metabolism. Tolcapone is almost completely metabolized and excreted in urine and feces; glucuronidation is the most important route of metabolism. No accumulation of tolcapone or its metabolite occurred when multiple doses of the drug were given to elderly volunteers.

Mass spectrometry has been used on a multiorgan human-on-a-chip system, which includes 7 interacting microphysiological systems -- brain, pancreas, liver, lung, heart, gut, and endometrium -- for the comprehensive study of tolcapone metabolism and metabolite profiling (23). The results showed that oxidation, reduction, and conjugation reactions were the most important routes of tolcapone metabolism.

Formulations. A sustained-release tablet of tolcapone for oral administration, manufactured by direct compression, has a preferred dosage regimen of 1 administration every 12 or 24 hours (17).

Pharmacogenetics/pharmacogenomics. fMRI studies have revealed that tolcapone improves cognition and cortical information processing in normal human subjects. Individuals with val/val genotypes improve, whereas individuals with met/met genotypes worsen on tolcapone. Although neither COMT genotype nor tolcapone affect brain electrical activity in wakefulness and sleep, val/met heterozygotes produce twice as many lapses after a night without sleep than met/met homozygotes on exposure to tolcapone (22).

The effectiveness of tolcapone has been shown in clinical trials starting in 1997. Only trials conducted within the last decade are described here (see Table 1).

An observational study of tolcapone under practice conditions showed it to be safe and effective in patients with Parkinson disease with low risk for hepatotoxicity (05).

Tolcapone should be used only in patients with Parkinson disease "who do not have any movement abnormalities and who do not respond to, or who are not appropriate candidates for, other available treatments" according to a Food and Drug Administration letter mailed to United States doctors in 1998.

Tolcapone should not be withdrawn suddenly unless dopamine levels are kept up by other means, as there is a risk of developing neuroleptic malignant syndrome. The dose should be tapered slowly.

The American Academy of Neurology guidelines suggest adding a COMT inhibitor to levodopa-dopamine agonist therapy in patients with advanced disease. However, tolcapone is reserved for the treatment of patients who do not respond to other anti-Parkinson drugs. Routine liver monitoring is now mandatory with this agent. Tolcapone treatment is continued for as long as the patient tolerates the treatment and no adverse effects, such as hepatic dysfunction, occur. If such a situation does arise, the drug is discontinued gradually and substituted by another anti-Parkinson drug. Tolcapone should be considered in all patients with entacapone-refractory motor fluctuations. According to the results of an open clinical study, adjunctive tolcapone treatment is associated with significant improvement in quality of life in patients with Parkinson disease (21). Although tolcapone has a greater therapeutic effect than entacapone on Parkinson disease patients experiencing motor fluctuations, this is not consistent for all motor variables; with the added problem of monitoring for serious adverse effects, support for its preferential use is lost (13). Tolcapone has a negative risk-benefit balance, with an unacceptable risk of severe hepatitis.

Caution is recommended for use in elderly patients with hepatic dysfunction.

Although animal studies have not shown tolcapone to be teratogenic, no definite opinion can be given on use during pregnancy, which is unlikely in the patient population treated by this drug.

Tolcapone is metabolized in the liver by cytochrome P450. Information related to the effect of tolcapone on other drugs that are metabolized through this system is limited, and appropriate monitoring is indicated. Although not observed in vivo, in vitro data suggest possible interactions with warfarin and tolbutamide. See the Physicians Desk Reference for more details.

Tolcapone as an adjunct to levodopa and carbidopa was well tolerated during clinical trials. Dopaminergic-related adverse events, including dyskinesia and nausea, increased during the initial part of treatment but diminished as levodopa dosages were adjusted. Postural hypotension, dizziness, urine discoloration, insomnia, confusion, and hallucinations were also observed more frequently in tolcapone recipients. Another adverse effect was diarrhea, which either resolved or was mild enough to allow long-term tolcapone treatment.

Tolcapone is a more potent mitochondrial toxicant than entacapone, which is a possible mechanism for tolcapone-associated hepatotoxicity (11). Some recipients developed raised levels of alanine aminotransferase and aspartate aminotransferase. On this basis, it was recommended that liver enzymes be monitored once a month during the first 3 months of treatment and every 6 weeks for the next 3 months of treatment. In clinical use, entacapone has been safe, but tolcapone is under strict regulations on liver enzyme monitoring as, in the early years, a few hepatotoxicity cases appeared, 3 of them with fatal outcome (12).

This severe hepatic adverse effect has not been seen thus far with the other catechol-O-methyltransferase inhibitor, entacapone. The mechanism of hepatotoxicity of tolcapone is uncoupling of oxidative phosphorylation in vivo, which does not occur with entacapone. The mechanism of tolcapone-induced liver toxicity has been studied both in vitro and in vivo, but no clear explanation has emerged. A pharmacogenetic basis is suggested by the finding that single nucleotide polymorphisms located within the UDP-glucuronosyltransferase 1A gene complex, which codes for the enzymes involved in the main elimination pathway of tolcapone, are significantly associated with the occurrence of elevated liver transaminase levels. Theoretically, genotyping should identify the patients susceptible to this adverse effect so that the use of tolcapone in these patients can be avoided. This approach has not been used in practice so far.