Ancient Indian, Greek, Roman, and Chinese mythological accounts abound with many kinds of transplants, including those involving cadavers or animals. The first turning point for modern transplant practices was development of technique to perform vascular anastomoses. This Nobel Prize-winning technique was credited to a French doctor, Alexis Carrel. This surgical technique paved the way for solid-organ transplantation. Credit of first successful renal transplant, performed in 1954, is given to Dr Joseph Murray of the United States. Since then, kidneys have been the most frequently transplanted organ. Credit for the first liver transplant goes to Dr Thomas Starzl, who performed the transplant in 1963. Results were not encouraging initially, but now liver transplant is a successful treatment option for liver failure. Credit for the world's first heart transplant, done in 1967, is given to Dr Christiaan Barnard of South Africa. In the year 1963, a team of surgeons led by Dr. James D Hardy performed the first human lung transplant in the University of Mississippi Medical Center, United States. The discovery of cyclosporine, an immunosuppressant, brought a sea change in patient survival following organ transplantation. The development of organ transplantation roughly coincided with the concept of declaration of death by brain criteria.

The majority of neurologic complications in the posttransplant period occur within 30 days. The neurologic complications include seizures, encephalopathy, stroke, opportunistic infections, lymphoproliferative disorder, central pontine myelinosis, and neurotoxicity caused by immunosuppressants (06; 50). The most significant differences between hematopoietic cell transplantation and solid-organ transplantation occur in the first few weeks after transplant (Table-1).

Seizures. Seizure disorder is a common neurologic complication in many posttransplant patients. Seizures are most common in liver and then heart recipients. Seizures in these patients are usually generalized. Immunosuppressant drug toxicity as well as metabolic abnormalities, such as hyponatremia, hypomagnesemia, hypoglycemia, and hyperammonemia, are often responsible for generalized seizures. In many patients, focal brain lesions (eg, hemorrhage, infarct, fungal abscess and de novo neoplasms) can cause focal seizures (37). Seizures are relatively uncommon in allogeneic hematopoietic stem cell transplantation.

Progressive multifocal leukoencephalopathy is a fatal demyelinating disorder of the brain following immunosuppression after organ transplantation. Progressive multifocal leukoencephalopathy is caused by reactivation of the JC virus in an immunocompromised host. Progressive multifocal leukoencephalopathy clinically manifests with changes in personality, cognitive abnormalities, focal neurologic deficits, gait abnormalities, and cortical vision loss. MRI shows multiple subcortical white matter signal changes on T2-weighted and FLAIR imaging. There is, classically, no contrast enhancement or mass effect (77; 12). However, contrast enhancement can be seen when immunosuppression is reduced to combat the viral infection and if phenomenon of immune reconstitution inflammatory syndrome takes place.

In 2004, 4 recipients of organ transplants from a common organ donor died of unexplained encephalitis. Encephalitis developed within 30 days after transplantation. All 4 patients died within 2 weeks. Extensive testing demonstrated rabies virus both in donor and all the recipients (64).

Bacteria. Nocardiosis is an opportunistic infection caused by Nocardia, a gram-positive Actinomycetes, that is likely to affect transplant recipients. The common sites of infection are lung, brain, and skin. Nocardial infection often manifests as single or multiple brain abscesses. Nocardia farcinica is most frequent Nocardia species to cause brain lesions. Many patients have asymptomatic nocardial brain lesions. In multivariable analysis, high calcineurin inhibitor levels, tacrolimus, and high-dose corticosteroids, higher patient age, and a longer stay in the intensive care unit are associated with development of nocardiosis (14; 13).

Fungus. Solid-organ transplant recipients are at enhanced risk of life-threatening invasive fungal disease. The posttransplant population is at a significantly increased risk for a variety of fungal infections of brain (67).

Protozoa. Toxoplasmosis, caused by Toxoplasma gondii, is the most common protozoal brain infection in organ transplanted patients. The liver is a frequent site of cyst carriage, confirming that transplantation of an organ from a seropositive donor to seronegative recipient brings high risk for acquired toxoplasmosis (05). A total of 87 toxoplasmosis cases were recorded (58 hematopoietic stem cell transplant, 29 solid-organ transplants); the 6-month survival rate was lower among Toxoplasma-seropositive recipients and among hematopoietic stem cell and liver recipients (54). Toxoplasmosis is clinically characterized with fever, headache, seizures, altered sensorium, and focal neurologic deficits. Infrequently, the disease is disseminated and presents as encephalitis. The diagnosis of toxoplasmosis is confirmed with the demonstration of Toxoplasma gondii organisms in blood, body fluids, or tissue. Neuroimaging in patients with toxoplasma encephalitis reveals multiple ring-enhancing lesions. In patients who have Toxoplasma antibodies in serum and multiple ring-enhancing lesions of brain, the diagnosis of toxoplasma encephalitis is quite certain.

Neurotoxicity associated with immunosuppressants. Immunosuppressive agents have brought a sea change in the scenario of organ transplantations. Cyclosporine and tacrolimus are two most commonly used agents. Both, cyclosporine and tacrolimus belong to the calcineurin inhibitor group of drugs. Cyclosporin causes neurologic side effects in up to 40% of patients. A reversible posterior leukoencephalopathy syndrome is the most frequent complication (26). Other neurotoxicity can manifest with tremor, acute confusional state, status epilepticus, and speech abnormalities (73; 08). Long-term calcineurin inhibitor administrations are associated with an increased risk of cognitive abnormalities (47). Tacrolimus is also associated with similar kind of neurotoxicity (60) (Table-2).

Complications by type of solid-organ transplantation.

Renal transplantation. Frequently, associated illnesses like hypertension, diabetes, and cardiovascular and cerebrovascular disease contribute to some neurologic complications in the kidney transplanted population. In addition, prolonged dialysis leads beta2-microglobulin accumulation in tissues and subsequently dialysis-related amyloidosis. Amyloidosis can present with carpal tunnel syndrome and other neuropathies. Dialysis itself can directly or indirectly be associated with many of the neurologic complications in these patients (09; 51; 43). Seizures due to posterior reversible leukoencephalopathy syndrome are the commonest acute complication in the kidney transplant population (25). Femoral nerve neuropathy is an infrequent complication after kidney transplantation. Femoral nerve is involved because of nerve damage from pelvic surgery. Other factors that can play a role in the pathogenesis of femoral nerve neuropathy are direct ischemia of the nerve by clamping of the iliac artery and hematoma formation in the retroperitoneum or psoas muscle (71; 33).

Heart transplantation. Neurologic complications in orthotopic heart transplantation adversely affects the prognosis in the posttransplant period. The most frequent neurologic complications are encephalopathy and stroke. Hemodynamic instability, cardiac arrest, extracorporeal circulation, stroke, and carotid stenosis are risk factors (03). In a retrospective study with data of 314 patients, stoke occurred in 20% of patients. Ischemic stroke was the most common subtype (70). Early strokes were associated with decreased 1-year survival (01; 10). Toxoplasmosis is a unique infectious risk, as the parasite can be in the transplanted myocardium and can become symptomatic within the first 3 months after transplantation.

Graft-versus-host disease. Graft-versus-host disease is a severe immune disorder that can variably affect multiple organs. It is seen following allogeneic hematopoietic stem cell transplantation, and many neurologic complications may be associated with it. Many immune-mediated neuromuscular complications, like neuropathies, myopathy, and myasthenia gravis, and many central nervous system complications, like, stroke, demyelinating disorders, and encephalitis, are reported (Grauer det al 2010; 35).

Other long-term problems frequently seen in the organ transplanted population are adverse effects of continued treatment. The most commonly used antiepileptic drug used in transplanted patients is phenytoin. Phenytoin toxicity can produce nystagmus, dysarthria, and ataxia and may even lead to coma. Intravenous phenytoin may be complicated by the purple glove syndrome. Long-term usage of corticosteroids may be associated with psychotic reactions, steroid myopathy, and critical illness polyneuropathy. Serotonin reuptake inhibitors may be associated serotonin syndrome. Late-onset infections months after transplantation are likely. These infections usually occur after allograft procedures in association with graft-versus-host disease or after therapy for graft-versus-host disease.

In 2015, globally 126,670 solid-organ transplants were performed; the highest number of them were kidney transplants (27).

A rigorous screening of every donor for any existing infection is crucial. The transplant team should remain alert to possible local environmental and nosocomial pathogens and should take prompt measures to recognize and treat them. A preoperative assessment for preexisting neurologic disorders is crucial as it can predict central or peripheral nerve dysfunction in the posttransplant period. Prompt diagnosis is needed to effectively handle otherwise potentially lethal central nervous system complications.

For example, early wound debridement of bacterial and fungal cutaneous lesions may be required for diagnosis to prevent them from being invasive. Recommended vaccination guidelines meant for organ transplant recipients and their households, including pets, should be strictly followed (18).

Clinicians should have a strong suspicion for any opportunistic central nervous infections in organ transplant recipients. The initial diagnostic work-up must include neuroimaging, cerebrospinal fluid analysis, and an evaluation for systemic infections.

Single or multiple ring-enhancing lesions have a long list of differential diagnoses, including bacterial, fungal, or nocardial abscess, tuberculoma, amebic toxoplasmosis, and metastasis. Diffusion-weighted imaging is helpful in distinguishing between tumor and abscess.

Lesions of toxoplasmosis preferentially affect basal ganglia but can be widespread (58). 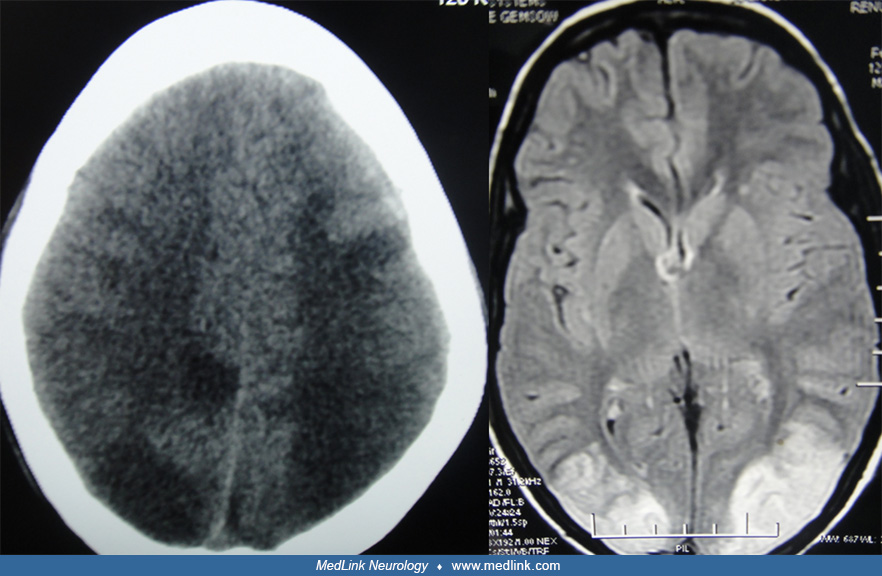 Patchy areas of signal change in the pons are consistent with central pontine myelinolysis (58).

Patchy areas of gray matter hyperintensity and enhancement are seen in a variety of viral, bacterial, autoimmune, and carcinomatous encephalitis. A large cerebral infarct or hematoma results from either a cerebrovascular event or focal vascular invasion by Aspergillus fungus. Patchy or diffuse meningeal enhancement is seen in a variety of neurologic complications, including viral, bacterial, and carcinomatous encephalitis (58).

Brain biopsy. Brain or meningeal biopsy is needed in certain circumstances to establish the diagnosis. Debridement of fungal or bacterial abscess have both diagnostic and therapeutic advantage.

Seizure may lead to inadvertent serious medical complications like aspiration and can result in prolonged altered sensorium. In acute conditions, benzodiazepines (like lorazepam) is a preferred drug. For prolonged seizure prophylaxis, conventional antiepileptic drugs phenytoin, valproate, phenobarbital, and carbamazepine are not suitable because they are metabolized in the liver. Many of these drugs have potential to increase liver enzyme induction that can affect activity of immunosuppressive drugs. Levetiracetam is the current drug of choice for posttransplant seizures. Treatment of posterior reversible encephalopathy syndrome requires immediate treatment of hypertension, meticulous fluid and electrolyte balance, and adjustments in doses of calcineurin inhibitor.

If the central nervous system is suspected, empiric broad-spectrum antimicrobial therapy should be started. Vancomycin plus third-generation cephalosporins are preferred antibiotics for bacterial infections. Listeria monocytogenes infection requires ampicillin. Fungal infections require treatment with liposomal amphotericin and 5-flucytosine. Voriconazole is used for aspergillosis. Toxoplasma gondii infection is treated with pyrimethamine plus sulfadiazine. The treatment for progressive multifocal leukoencephalopathy is reduction in immunosuppression. No antiviral drug has shown any efficacy in this condition. Many other viral infections require treatment with acyclovir or ganciclovir (75).

Pregnancy after kidney transplantation is associated with serious maternal and fetal complications. For posttransplant women who have already given birth, it is worth considering contraceptive counseling because these women more often choose to not attempt another pregnancy (66). Preeclampsia commonly complicates pregnancies after renal transplantation but is not associated with serious complication (72). Vaginal delivery should always be contemplated and cesarean delivery is reserved only for genuine obstetric need. Toxic effects of immunosuppressive drugs exposed in utero and during breast feeding and its long-term effects in the offspring need to be considered.

A meticulous preoperative assessment is needed to identify risk factors, to improve cardiac conditions, to treat acid-base balance, and to administer the most appropriate perioperative therapy regime. Preoperative care in a kidney transplant candidate requires optimal care for the living donor, the avoidance of nephrotoxic drugs, a goal-directed hemodynamic management strategy, and optimized postoperative care. All these measures may improve outcome after renal transplant surgery (57).