Gabapentin, a GABA-receptor agonist, was first studied as an antiepileptic drug in humans in 1987. The synthesis of vigabatrin (gamma-vinyl-GABA) was a result of a rational approach to design compounds to inhibit the major GABA-degrading enzyme, GABA transaminase. It was approved for use in several European countries in 1989. It was approved by the United States Food and Drug Administration in 1997. During the 15 years since the initial clinical trial in humans and 10 years since approval, more than 175,000 patients have been treated with this drug. More than 30 years of history for research and development of vigabatrin has been presented in a clinically relevant review (28).

Vigabatrin is a structural analog of GABA. 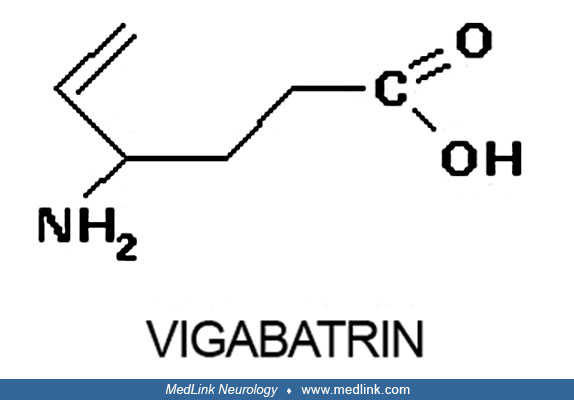 Pharmacodynamics. The mechanism of action of vigabatrin is an irreversible inhibition of GABA-transaminase, the enzyme responsible for the catabolism of GABA. Vigabatrin has two stereoisomers, S(+) enantiomer and R(–) enantiomer, of which only the S(+) form is pharmacologically active, although it is administered in R(–) form. Vigabatrin exerts its antiepileptic effect by inhibiting the breakdown of GABA, thereby increasing the concentration of this inhibitory neurotransmitter at the synapses. It increases the concentration of GABA in the brains of experimental animals and in the CSF of patients in a dose-dependent manner. In vivo GABA concentration can be measured in the CSF of patients by magnetic resonance spectroscopy. The decrease in seizure frequency is also dose-related. Vigabatrin does not affect the concentration of other neurotransmitters or peptides within the CNS of treated patients as determined from CSF examination.

Vigabatrin and tiagabine are pharmacologically distinct compounds with different anticonvulsant, neurotoxicity, and pharmacokinetic profiles. Vigabatrin attenuates the metabolism of GABA by inhibiting the enzyme GABA-transaminase, whereas tiagabine blocks the uptake of GABA from the synaptic cleft by an action on the GAT-1 transporter.

Pharmacokinetics. The two enantiomers of vigabatrin differ somewhat in their pharmacokinetic properties. The R(–) form does not interfere with the activity of the S(+) form. Absorption of vigabatrin is rapid and complete after oral administration and does not seem to be influenced by the presence of food. Following oral administration of 1 to 1.5 g of vigabatrin, maximum plasma concentrations are achieved in approximately one to three hours. The peak concentration of the S(+) form is twice that of the R(–) form. The half-life of vigabatrin is about seven hours and is similar for both enantiomers. Despite the short plasma half-life, inhibition of GABA-T results in relatively long duration of action, and CSF GABA levels can remain elevated up to 120 hours after a single oral dose. Plasma concentrations of vigabatrin need not be monitored. The drug does not undergo significant hepatic transformation and, thus, is recovered unchanged in the urine.

Therapeutic drug monitoring. Multimodality monitoring, including cerebral microdialysis in acute traumatic brain injury, has shown that vigabatrin crosses the blood-brain barrier, leading to modest increases of GABA level in extracellular fluid (06). Pharmacokinetics of a later study in traumatic brain injury shows that even though the uptake of vigabatrin into the extracellular fluid of the brain is somewhat delayed, it accumulates there following multiple dosing (26).

Vigabatrin has been studied extensively, particularly in Europe, with more than 60 published studies describing the experience of its efficacy and safety in a variety of seizure disorders. Long-term study value of vigabatrin as an add-on therapy in drug-resistant patients with chronic epilepsy has been established. In a 5-year follow-up study in patients with drug-resistant epilepsy, there was greater than 50% seizure frequency reduction (27). Vigabatrin is considered to have a favorable risk-benefit profile. A European clinical trial comparing vigabatrin and carbamazepine as monotherapy in newly diagnosed epilepsy concluded that vigabatrin is less effective than carbamazepine and cannot be recommended as a first-choice drug in the treatment of partial epilepsies (07). The results of a randomized, placebo-controlled study show that vigabatrin could be considered as the drug of first choice in treating infantile spasms (02). Currently, vigabatrin is available through a manufacturer-sponsored program in accordance with its FDA-approved Risk Evaluation and Mitigation Strategy (20).

A retrospective review of the efficacy and safety profile of vigabatrin in the treatment of childhood epilepsy confirmed the efficacy of vigabatrin in the treatment of infantile spasms as well as partial epilepsies, and it was well tolerated (05). A Cochrane Database review of randomized, controlled trials showed that vigabatrin can reduce seizure frequency in adults with drug-resistant partial epilepsy, but the results should not be extrapolated to children under 10 years of age (03). Analysis of longer-term observational studies has demonstrated that vigabatrin use can lead to the development of visual field defects.

Vigabatrin is indicated as an adjunctive treatment in patients with seizure disorders who are refractory to current antiepileptic therapies or experience limiting side effects that preclude the use of standard regimens.

Known hypersensitivity to vigabatrin is a contraindication for the use of the drug. The dose should be tapered off over a period of two to four weeks when the drug is discontinued. The drug should be avoided in patients with a previous history of psychiatric disorders as it may aggravate depression and psychoses. For details, see the Physicians’ Desk Reference.

The aim of therapy is to control seizures. Therapy is continued for as long as seizure control is required.

The usual adult dose is 2 g/day given orally in two divided doses. According to the clinical response, the dose may be increased by 0.5 to 1 g/day to a total dose of 4 g/day. The recommended dose for children three to nine years of age is 1 g/day; 2 g/day is recommended in older children. Because the excretion is mainly renal, the dose should be reduced in patients with renal insufficiency and creatinine clearance below 60 mL/L.

A pharmacokinetic study using simulations has determined that, for children aged between three months and 18 years, doses between 40 and 50 mg/kg per day allow vigabatrin-S expositions similar to those found in adults at the recommended dosage and these doses are proposed as optimal maintenance doses that may be increased, if necessary, by slow titration (22).

Pediatric. Vigabatrin is as effective in the treatment of children as it is in adults. Pharmacokinetics in children are like those in adults. In a retrospective study of children with epilepsy treated over a median duration of approximately one year, vigabatrin was found to be effective in all seizure types, and it resolved hypsarrhythmia in most patients (12). The safety profile was good with a low rate of discontinuation due to nonophthalmologic and ophthalmologic adverse effects.

Geriatric. Elderly patients with impaired renal function have a reduced renal clearance of vigabatrin and are prone to adverse effects such as drowsiness. The dosage needs to be reduced in such cases.

Pregnancy. Vigabatrin can cause congenital malformations in animal studies, but no human data are available. Vigabatrin may be used in pregnant women if potential benefits exceed the possible risks to the fetus. The amount of vigabatrin transferred through the placenta is small. Excretion of the drug in the milk of nursing mothers is also small; however, according to the manufacturer's instructions, breast-feeding is not recommended for women on vigabatrin therapy.

Anesthesia. There are no known interactions or complications during anesthesia in patients on vigabatrin therapy.

Interactions with other drugs are unlikely because vigabatrin is not bound to plasma proteins and is not metabolized. However, vigabatrin decreases phenytoin levels by 20% to 30%, although the mechanism is unknown. Plasma concentrations of phenobarbital and valproic acid are not affected significantly by vigabatrin. Vigabatrin produces a significant increase in the plasma clearance of carbamazepine when the two drugs are given simultaneously.

Vigabatrin is generally well tolerated, with approximately 5% to 15% of patients withdrawing from clinical trials due to unwanted side effects. Most of the adverse effects involve the nervous system and are possibly due to raised GABA concentration. Drowsiness is the most frequent complaint. Other CNS complaints include dizziness, headache, confusion, ataxia, diplopia, memory impairment, and insomnia. There is a low incidence of depression and psychoses as well. A more detailed listing of adverse reactions is given in the Physicians’ Desk Reference. White matter spongiosis, defined by electron microscopy as intramyelinic edema, has been previously reported as an adverse effect of vigabatrin therapy in various animal models and has been confirmed on autopsy of an epileptic child following sudden death (17). Vigabatrin is associated with transient, asymptomatic MRI abnormalities in infants treated for infantile spasms, but most of these resolve—even in subjects who remain on vigabatrin therapy. There is a case report of a patient with infantile spasms who developed ataxic movements following treatment with vigabatrin, and MRI demonstrated a symmetrical pattern of thalamic and globi pallidi diffusion restriction, which resolved (24). However, there is another case report of an infant with infantile spasms treated with adrenocorticotropic hormone and vigabatrin who presented with a movement disorder and encephalopathy with MRI changes that had not been seen with hormone therapy alone (15). Encephalopathy resolved after discontinuation of vigabatrin.

Visual field defects. Vigabatrin-induced optic neuropathy manifested by visual field defects has been reported and is due to reversible myelin edema in the optic nerves. Another explanation is retinal cone system dysfunction. Vigabatrin also affects foveal cone electroretinographic amplitudes and rod-derived visual fields. The mechanism of vigabatrin-mediated retinal degeneration is accumulation of the amino acid taurine in retinal cells, and deficiency of this amino acid may be involved in phototoxicity (11). In a meta-analysis of studies of patients with epilepsy who received vigabatrin treatment, peripapillary retinal nerve fiber layer thickness was reduced, and optical coherence tomography was found to be a useful tool to help clinicians for assessing retinal toxicity and guiding the dosage (19).

Perimetry seemed to be the most sensitive modality for identifying vigabatrin toxicity. Visual field loss resulting from vigabatrin is usually not reversible. However, visual acuity, color vision, and electroretinogram amplitude loss may be reversible in patients with minimal or no field loss. Visual field defects were found in 34% of children treated with vigabatrin for infantile spasms in an international multicenter study, and the rate increased from 9% to 63% as duration of treatment was prolonged (21). There is some evidence that visual field defects remain stable with continuous treatment. These data give support to the hypothesis that the pathogenesis of vigabatrin-associated visual field defects may be an idiosyncratic adverse drug reaction rather than dose-dependent toxicity. It is, therefore, feasible to continue treatment with vigabatrin in these cases, provided regular visual field monitoring is done. Reversibility of visual field loss after withdrawal of vigabatrin has been reported in some cases. White sphere kinetic perimetry has the potential to detect visual field constriction associated with vigabatrin use in young children (01). Electrophysiologic testing is more accurate than the visual field testing to monitor the direct vigabatrin effect on the outer retina. Wide-field multifocal electroretinogram is useful for assessment of retinal function in vigabatrin-treated patients. Optical coherence tomography can detect attenuation of the retinal nerve fiber layer in patients exposed to vigabatrin and correlates with reduced full-field electroretinography parameters as well as constricted visual fields, indicating retinotoxicity at several levels (14).

In view of the concern for visual field complications, a prospective study on adult patients with refractory complex partial seizures conducted ophthalmologic examination prior to initiation of vigabatrin therapy and documented several patients with preexisting visual field defects (25). Up to one year of adjunctive vigabatrin treatment did not significantly change near visual fields in the treated patients. The limitations of this study were single-arm, open-label design and limited duration of exposure.

All vigabatrin-treated patients in the United States are required to enroll in the vigabatrin patient registry, which was started in 2009 following approval of vigabatrin by the FDA. Vision assessments are now required at baseline after therapy initiation, every three months during therapy, and three to six months after discontinuation of treatment (18).

Ophthalmological assessments, including electroretinograms, are recommended for monitoring retinal health during vigabatrin treatment. A prospective study has shown the reliability of RETeval™, a hand-held, dilation-free device for electroretinography in children under three years of age treated with vigabatrin (13).