Ziconotide, the synthetic form of cone snail peptide pi (variant) conotoxin MVIIA, is a neuron-specific N-type calcium channel blocker that has been under development for the treatment of severe chronic pain and ischemia. The snail has been used in medicine since antiquity and prepared according to several formulations. Pliny considered the snail to be "a sovereign remedy to treat pain related to burns, abscesses and other wounds” (05).

Pi (variant) peptides that block voltage-sensitive calcium channels were isolated from a species of conus snails in 1991 (15). Development of SNX-111 (now ziconotide) for cerebral ischemia and traumatic brain injury began in 1993, and clinical trials for chronic pain started in 1995. Intrathecal ziconotide for pain was approved by the FDA in 2004 and by the European Medicines Agency in 2005.

Ziconotide is a 25-amino acid polycationic peptide containing 6 cysteine residues linked by 3 disulfide bridges and is the synthetic form of a conotoxin peptide found in the venom of the snail Conus magus. 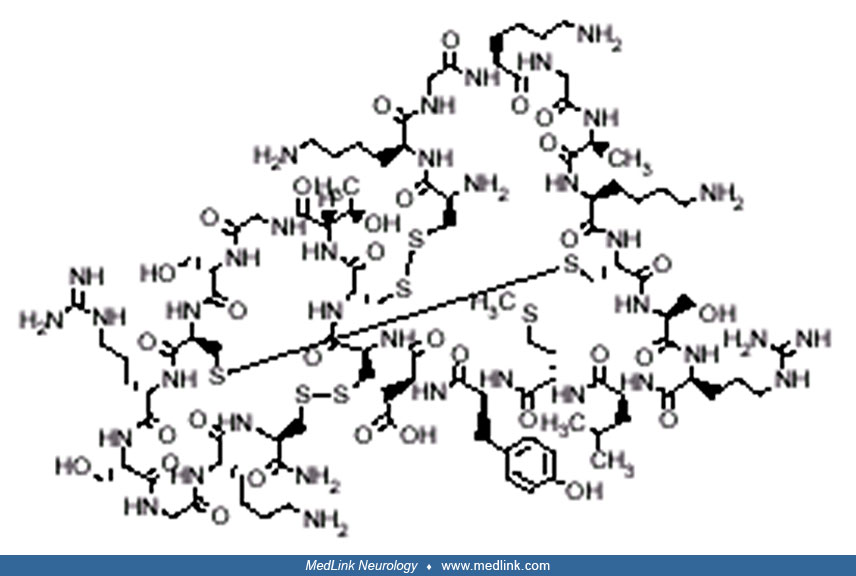 Because of the problems associated with delivery and bioavailability of peptides, small molecule, nonpeptidic mimics of conotoxins have been modified to improve their drug-like properties and are in development (08). One of these, leconotide, is the most selective conotoxin for the N-type calcium channel and has a wider therapeutic window than ziconotide, with fewer cardiovascular side effects.

Pharmacodynamics. The therapeutic potential of ziconotide is based on its property as a specific and selective blocker of N-type voltage-specific calcium channel, with no significant affinity for other ion channels. The N-type channel is found exclusively in neurons and regulates depolarization-induced calcium influx. It controls a variety of calcium-dependent processes including the modulation of neuronal excitability and the release of neurotransmitters. Direct blockade of N-type channel inhibits the activity of a subset of neurons, including pain-sensing primary nociceptors. This mechanism of action distinguishes ziconotide from all other analgesics, including opioid analgesics. Ziconotide also acts as a neuroprotective agent by its ability to inhibit the release of excitotoxic neurotransmitters and to prevent pathologic calcium entry into neurons after traumatic and vascular insults to the brain. Spinally administered ziconotide produces analgesia by blocking the neurotransmitter release from primary nociceptive afferents and preventing the proliferation of pain signals to the brain. It is 50 times more potent than morphine but does not cause the adverse effects of opiates.

Pharmacokinetics. In healthy volunteers, a 2-compartment model with linear elimination and dose-proportional plasma concentration characterizes the pharmacokinetics of ziconotide. After a continuous infusion, ziconotide had a half-life of 1.3h and a tMAX of 5.3h.

In CSF, the median half-life of ziconotide is 4.5 hours. The pharmacokinetics of ziconotide are linear, based on cumulative exposure and peak CSF concentrations. Following intrathecal bolus injection or infusion in the dog, ziconotide is cleared slightly more rapidly than inulin from the lumbar CSF (24).

Double-blind, placebo-controlled, randomized trials of ziconotide were conducted from 1999 to 2009 with opioid-resistant, nonmalignant neuropathic pain, and cancer pain with significant relief.

Efficacy was shown with a substantially lower rate of serious adverse events in a multicenter observational study of a slow titration, multidrug protocol using intrathecal ziconotide for intractable cancer pain. Based on the results, it was recommended that multimodal intrathecal analgesia should include ziconotide from the outset in order to provide time for subsequent slow titration (09).

Across various clinical trials, approximately one sixth to one third of patients with refractory noncancer chronic pain and one half with cancer- or AIDS-related pain who received ziconotide reached a pain response threshold, ie, greater than or equal to 30% reduction in the pain intensity score by the end of the titration period (20).

Patient Registry of Intrathecal Ziconotide Management, an open-label, long-term, multicenter, observational study of adult patients with severe chronic pain, concluded that intrathecal ziconotide was more effective when initiated as first-line therapy versus not as the first intrathecal agent in pump (07). The safety profile was the same as in the drug prescription information.

Results of a systematic review of randomized controlled trials suggest that ziconotide is beneficial for pain reduction in chronic neuropathic pain, but some issues about methodology make the validity of results questionable (06). Further work is required to validate the efficacy of ziconotide and discover new areas for its use.

Intrathecal ziconotide is indicated for the treatment of chronic intractable pain, including pain associated with cancer and neuropathic pain.

There is a US FDA black-box warning that severe psychiatric symptoms and neurologic impairment may occur during treatment with ziconotide, and patients with a preexisting history of psychosis should not be treated with this medication.

Ziconotide is a non-opioid therapeutic option for treatment of severe chronic pain in patients who have exhausted all other agents, including intrathecal morphine, and for whom the potential benefit outweighs the risks of adverse effects and of having an implanted device. However, ziconotide has a narrow therapeutic window because of significant neurologic adverse effects that restrict its use to a small subset of patients with severe chronic pain (21). If intrathecal analgesia is considered necessary, ziconotide has obvious advantages over opioids in neuropathic and chronic noncancer pain, but lack of adverse effects of opioids should be weighed against severe neuropsychiatric adverse effects of ziconotide when making a decision (03). Combination of low doses of intrathecal ziconotide and morphine enables safe and rapid control of oral opioid-refractory malignant pain (01). A retrospective analysis of patients treated with low-dose intrathecal ziconotide as the first-line monotherapy showed no side effects that resulted in discontinuation of the treatment at 3-month follow-up, and treatment was effective in 53% of the patients (17).

A study on patients who had undergone a successful ziconotide trial and were scheduled for standard-of-care placement of a pump for intrathecal drug therapy showed that intrathecal ziconotide relieves neuropathic pain and improves its emotional components (ie, disability, emotional well-being, and catastrophizing of pain) (22).

A pilot study has shown that after an initial bolus dose of 2.5 mcg ziconotide, pain perception on visual analog scale was reduced by approximately 25% at the group level and it was generally well tolerated (14). Further studies are needed to determine if bolus dosing with ziconotide is a good predictor of continued response to long-term ziconotide administration via an implanted intrathecal drug delivery pump. It is important to remember that although ziconotide is effective, it has a narrow therapeutic window and should be titrated slowly and carefully to achieve maximal effect without adverse events (23).

The treatment is continuous depending on the duration of the pain. The analgesic effect can last for months. Ziconotide is a non-narcotic agent and does not have the problems associated with the use of narcotic medications such as morphine and morphine substitutes. There is no evidence that tolerance develops with prolonged use of the drug. Accumulated evidence from clinical trials and case studies suggests that ziconotide is a potential therapeutic option for patients with refractory neuropathic pain, but further studies are required to establish the long-term efficacy and safety (19). The Italian registry of long-term intrathecal ziconotide treatment has conducted a retrospective study of 104 patients treated at 17 centers in Italy and observed sustained relief of pain in 45 patients who received uninterrupted treatment for over 6 months (18).

Final analysis of “Patient Registry of Intrathecal Ziconotide Management” showed that intrathecal ziconotide provided clinically meaningful pain relief in 17.4% and 38.5% of patients at week 12 and month 18, respectively; at these same time points, patient-rated improvement was reported in at least two thirds of patients (13).

According to the European perspective, there is a need for consensus as ziconotide is underused in Europe, but it has potential to be a first-line alternative to morphine; both are already first-line options in the United States. Intrathecal ziconotide, when initiated using a low-dose, slow-titration approach, is suitable for many patients with noncancer- or cancer-related chronic refractory pain and no history of psychosis (12). Polyanalgesic Consensus Conference treatment algorithms for intrathecal ziconotide provide useful guidance, but recommendations tailored specifically for European settings are required.

In clinical trials, ziconotide was administered at doses varying from 1 to 100 ng/kg per hour intrathecally via an implanted SynchroMed pump (Medtronics Corporation).

Because ziconotide has a narrow therapeutic window, it requires a slow titration of dose to achieve analgesia while avoiding dose-limiting side effects. Initial doses should, therefore, be low (2.4 µg/day) and titrated slowly (increasing up to a maximum of 21.6 µg/day in increments of 2.4 µg/day) and should not be administered more than twice weekly (10). However, rapid titration of ziconotide has been found safe and effective for treatment of intractable acute pain in patients with malignant spinal cord tumors, chronic backache, and bilateral lower extremity neuropathic pain.

Contraindications. There is an FDA black-box warning that severe psychiatric symptoms and neurologic impairment may occur during treatment with ziconotide. Specifically, patients with a preexisting history of psychosis should not be treated with this medication.

Patients receiving ziconotide should be under the care of physicians experienced in the management of intrathecal infusion therapy for pain control and should have convenient access to medical facilities.

Anesthesia. No special precautions are necessary.

Pregnancy. No information is available on use in pregnant patients or in nursing mothers.

Pediatric. No information is available on use in children.

Geriatric. No special precautions are necessary.

Various adverse effects of intrathecal ziconotide during clinical trials include the following:

Management. Management is symptomatic. If severe side effects occur, this medication can be discontinued without tapering as there is no evidence of withdrawal effects from ziconotide. In case of psychosis following pump infusion of ziconotide, the pump should be drained clear of the drug, and antipsychotics such as risperidone should be used.