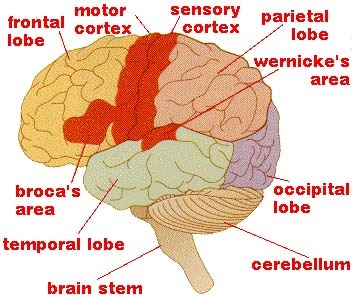 The brain is a highly specialized organ. It serves as the control center for functions of the body and allows us to cope with our environment. Words, actions, thoughts, and feelings are centered in the brain. It is so complex that some theorists believe we will never be able to fully understand it. We do, however, know that each part of the brain has a specific, important function, often a profoundly important function, and each part contributes to the healthy functioning of our body.

The location of tumors in the brain is one of the factors that determines how a brain tumor affects an individual's functioning and what symptoms the tumor causes. Click the link to learn more about brain anatomy in our Interactive Tour of the Brain or refer to the short glossary below.

Cerebrum is the largest part of the brain and is associated with conscious thought, movement and sensation. It consists of two halves, each controlling the opposite side of the body. The halves are connected by the corpus callosum, which delivers messages between them. Four lobes make up the cerebrum: the frontal, temporal, parietal, and occipital lobes.

Parietal lobe is one of the four lobes of the cerebral hemisphere. It controls tactile sensation, response to internal stimuli, sensory comprehension, some language, reading, and some visual functions.

Sensory cortex is located in the front part of the parietal lobe, or in other words, the middle area of the brain. The sensory cortex receives information from the spinal cord about the sense of touch, pressure, pain, and the perception of the position of body parts and their movements.

Motor cortex is an area located in the middle, top part of the brain that helps control movement in various parts of the body.

Occipital lobe is one of the four lobes of the cerebral hemisphere. It is located in the back of the head and controls vision.

Broca's area is located in the opercular and triangular sections of the inferior frontal gyrus. The function of this area is the understanding of language, speech, and the control of facial neurons.

Brain stem is located at the bottom of the brain and connects the cerebrum to the spinal cord. The brain stem controls many vitally important functions including motor and sensory pathways, cardiac and respiratory functions, and reflexes.

Cerebellum is located at the lower back of the head and is connected to the brain stem. It is the second largest structure of the brain and is made up of two hemispheres. The cerebellum controls complex motor functions such as walking, balance, posture, and general motor coordination.

Cerebrospinal fluid, also called CSF, is a clear substance that circulates through the brain and spinal cord. It provides nutrients and serves to cushion the brain and therefore protect it from injury. As this fluid gets absorbed, more is produced from the choroid plexus, a structure located in the ventricles. A brain tumor can cause a build-up or blockage of CSF.

Four ventricles of the brain are connected cavities within the brain, where cerebrospinal fluid is produced.

Hypothalamus is a region of the brain in partnership with the pituitary gland that controls the hormonal processes of the body as well as temperature, mood, hunger, and thirst.

Optic chiasm is located beneath the hypothalamus and is where the optic nerve crosses over to the opposite side of the brain.

Pineal gland controls the response to light and dark. The exact role of the pineal gland is not certain.

Pituitary gland is a small, bean-sized organ that is located at the base of the brain and is connected to the hypothalamus by a stalk. The pituitary gland secretes many essential hormones for growth and sexual maturation.

Meninges are the membrane covering the brain and spinal cord. A tumor arising from this tissue is called a meningioma.

Thalamus is located near the center of the brain and controls input and output to and from the brain, as well as the sensation of pain and attention.

This information was developed by the Brain Tumor Society and is herewith used with permission.