Introduction
The original term "meralgia paresthetica," is derived from Latin. Translated today, the description simply means: "pain and numbness of the thigh."

The cause of the pain is due to squeezing of the sensory (feeling) nerve as it passes under the gristle near the bony prominence (the anterior superior iliac spine) between the groin and the hip joint. The more descriptive term is entrapment of the lateral cutaneous nerve of the thigh. 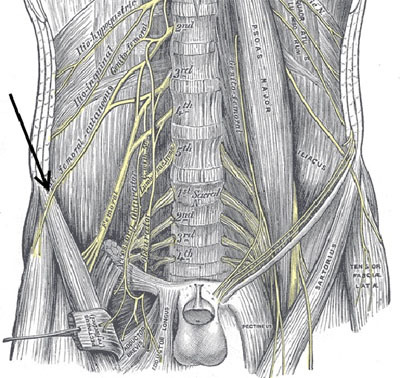 The lateral cutaneous nerve of the thigh, as the name implies, carries impulses from the skin over the front and outer aspect of the thigh. Any sensation of touch or hot or cold on the skin of the thigh is carried back to the spinal cord and the brain along the fibers from that nerve. This particular nerve does not have any fibers that supply muscles, so it does not cause weakness of the thigh. Anatomically, therefore, it is called a "pure sensory nerve."

The lateral cuaneous nerve of the thigh passes around the back of the abdomen and then wraps around the pelvis to pass under some thick 'gristle material' just at the bony point above the hips on each side of the body (arrow).

The area of skin supplied by the nerve is in pink and indicated by the arrow on the left. The size of this area is variable and may be as small as a few centimetres to almost the whole of the outer thigh from the hip to above the knee. The anatomy varies from person to person.

The onset is usually gradual rather than dramatic or sudden. There is often a vague sense of discomfort and sensitivity of the skin in a rather variable ovoid shape on the outer and top part of the thigh. This can be quite extensive, from the groin to above the knee in some patients, whereas in other patients the patch of sensitivity and numbness can be relatively small. In most all cases, the patch of sensory abnormality can be quite easily mapped out by the patient, using a black felt marking pen.

Often it is not strictly a numbness but rather an irritating hypersensitivity; people describe a sensation of ants crawling on the skin or as though their leg hairs are standing on end. They find it uncomfortable when clothing rubs against the skin of the thigh. It is commonly bothersome when they have been standing for some length of time; often they will shift from one leg to another if standing in a line. Sometimes it can be more obvious after sitting or crouching, again after a long period of time.

Usually meralgia paresthetica will begin in one leg and then after a few months may gradually appear in the other; it can be just in one leg or in both.

Sometimes at night in bed the warmth of the blankets will make things worse and the skin becomes hot and burning; people often describe this sensation as being similar to a sunburn.

Because the nerve is pinched in the groin region, it rarely if ever should be associated with back pain, and indeed if there is back pain, it makes the diagnosis of meralgia paresthetica unlikely. Moreover, because it is a pure sensory nerve, any perception of weakness of the hip or thigh or loss of muscle bulk in the thigh muscles should also indicate that it is not meralgia paresthetica.

Your neurologist will typically order scans of your lumbosacral spine, just to make sure there is nothing unexpected, because as explained, a diagnosis of meralgia paresthetica is based on the symptoms of a change in the perception of feeling over the thigh, normal reflexes, and an absence of weakness and wasting; all other aspects of the clinical examination must be normal.

Causes
There is no one simple explanation for this entrapment phenomenon. In women pregnancy may provoke the entrapment. With increasing weight and fluid in the uterus and pelvic region during pregnancy it seems the enlarging uterus pushes down and exerts some pressure on the nerve as it passes through the gristle from the pelvic region onto the skin of the thigh. Meralgia paresthetica is also quite common in people who are overweight, especially if the weight gain was rapid. It can, however, also be seen in fit and muscular individuals. There are also some medical conditions that seem to increase the chance of the nerve being squeezed, especially diabetes.

It has also been claimed that wearing a tight belt or a corset can provoke pressure on the nerve at the waist. Evidence for this is less than scientific but it's true that wearing a seatbelt can cause bruising of the nerve following an automobile accident. Meralgia paresthetica has rarely been described in people who have participated in prolonged physical exertion, such as marathon walking or cycling. Finally, it is a very rare risk of surgical procedures in the groin, especially in the unique situation of intentionally removing pieces of bone to provide healthy tissue for bone grafting in other parts of the body.

Treatment
More than half the patients who suffer from this condition do not have any obvious explanation. In other words, the causes discussed above are not apparent. If there is an obvious explanation then treatment suggestions can be more relevant. A pregnant woman will often find that after delivery her meralgia paresthetica resolves spontaneously. In an overweight individual, weight reduction is usually recommended. In most individuals, however, there is little that can be done to reverse the entrapment.

If the burning, irritating discomfort is very severe a small volume of local anaesthetic combined with cortisone will be injected as close as possible to the anterior superior iliac spine, in an effort to relieve the inflammation around the nerve. This usually provides symptomatic relief, but it does not provide a cure. Typically this condition resolves on its own, so usually the best advice is to be conservative and hope that time will heal the problem.

A common question that patients ask is whether physiotherapy or exercise can help. This has not yet been subjected to any scientific trial, but if exercise leads to improved fitness and weight reduction it is theoretically possible that it may produce benefit in an overweight individual.

Meralgia paresthetica is not as straightforward a condition to treat as the more common and well known entrapment of the wrist, carpal tunnel syndrome. Once carpal tunnel syndrome is diagnosed a simple and minor surgical procedure to cut the gristle that is squeezing the nerve at the wrist is curative. Unfortunately, with an entrapment of the lateral cutaneous nerve of the thigh, surgical exploration has not proved to be of any benefit.