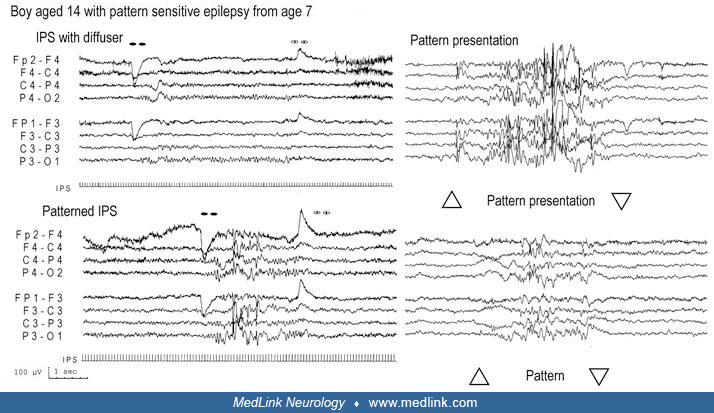 Samples from a video-EEG of a child aged 14 years with pure pattern-sensitive epilepsy from the age of 7 years. (Left, top and bottom) Only patterned intermittent photic stimulation (2 mm × 2 mm graticule superimposed on the glass of the stroboscope) elicits photoparoxysmal response. (Right, top and bottom) Paroxysmal discharges were consistently elicited by various linear patterns. The child is of normal development and scholastic performance. He has brief 4 to 10 second absence seizures consisting of mild-to-moderate impairment of consciousness and concurrent upwards rolling of the eyeballs with eyelid flickering. The seizures are invariably elicited by patterns with grids or stripes, such as escalators, and the dotted lines of microwaves, radiators, or cloths. On 5 occasions, the absence seizures were followed by GTCS. He is also drawn like a magnet to the television screen, though he is not photosensitive. Spontaneous absence seizures occur only after awakening. A characteristic feature is that when patterns appear in his visual field, his eyes fixate (freeze) to them, and he is unable to break his gaze. He says that he finds patterns “hypnotic,” but not pleasant. He would avoid patterns if he could, and he does not seek them out. (Used with permission from: Panayiotopoulos CP. Reflex seizures and related epileptic syndromes: a clinical guide to epileptic syndromes and their treatment. Revised 2nd ed. London: Springer, 2010:497-531.)