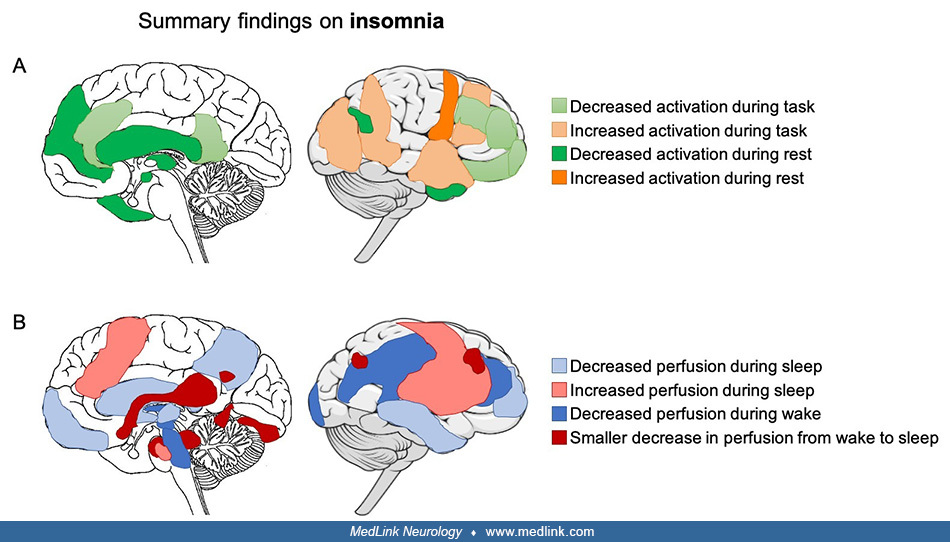 This is an image preview.
Start a Free Account
to view the full image.

(A) Summary of findings from fMRI studies in insomnia. Overall, there is an increased activation in response to sleep-related and emotional stimuli in the left temporal (including amygdala) and occipital lobes and right frontal lobe. A decreased activation in response to other types of stimuli, such as tasks involving executive control, occurs in the left medial and inferior frontal gyrus, dorsolateral prefrontal cortex, anterior and posterior cingulate cortex, and orbitofrontal cortex. In addition, at rest, the activation is decreased in the amygdala, insula, striatum, thalamus, medial prefrontal cortex, middle temporal gyrus, and left temporal and left inferior parietal cortex, whereas connectivity between the amygdala and premotor cortex is increased. (B) Summary of findings from PET and SPECT studies in insomnia. During wakefulness, there is an overall decreased perfusion across regions of the frontal, temporal, parietal, and occipital cortices as well as in the thalamus, hypothalamus, and brainstem reticular formation. The overall activity decrease in the default mode network in the transition from wakefulness to sleep is less pronounced in insomnia. During NREM sleep, decreased regional cerebral blood flow is present in the frontal medial and frontal lateral cortex; occipital, temporal, and parietal cortices; thalamus; basal ganglia; and pons. (Contributed by Dr. Nathan Cross and Dr. Florence Pomares.)