This unique autosomal recessive disorder, characterized by progressive sensorimotor neuropathy, mental retardation, and agenesis of the corpus callosum, was first described by Andermann and colleagues (05; 02). 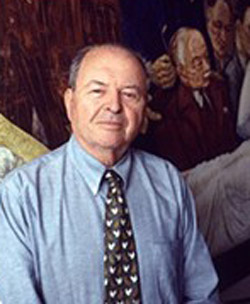 The syndrome was defined more extensively in subsequent years (01; 04). The eponym was first used to refer to this entity by Larbrisseau and colleagues (19). Most cases have been found among members of the French-Canadian population, originating from the Charlevoix County, who eventually migrated to the Saguenay-Lac-Saint-Jean region in the Province of Québec. A high degree of consanguinity exists in this population. Many affected individuals have been traced to a common ancestral couple from France who married in Québec City in 1657, thus, demonstrating a "founder effect" (05; 03; 09; 17).

The first manifestations of the condition become apparent around the age of 4 to 6 months with evidence of delayed motor milestones, hypotonia, areflexia, and muscular weakness, more marked distally and in the lower limbs. (01; 19; 21). The great majority of patients started walking, most with support and braces, between 4 and 8 years, but some have never walked independently. This is shortly followed by progressive motor deterioration with increased weakness, amyotrophy, and contractures of the distal musculature. Progressive scoliosis occurs between the ages of 9 and 11 years. Most become confined to a wheelchair in early adolescence. Sensory involvement is difficult to assess because of limited mental capacities. Mild distal sensory loss can be found in the second half of the first decade. In addition to progressive flaccid tetraplegia and distal amyotrophy, neurologic examination reveals a nonprogressive bilateral ptosis (in two thirds of the cases), a slight limitation of upward gaze (in about one third of the cases), and, less often, an intention tremor of the upper extremities.

Most patients develop speech, but are dysarthric. The majority has mild to moderate mental retardation, but a few have borderline or low average intelligence. Filteau described psychotic manifestations in 20 subjects of 62 subjects with Andermann syndrome (14). The mean age of appearance of the symptoms was 27.6 years of age + 5 to 6 years. The psychotic manifestations are of the paranoid type with terrifying visual hallucinations; at times, the patients also manifest auditory hallucinations and paranoid delusions. The psychosis is preceded by a period of apathy and social withdrawal; it coincides with deterioration in autonomic functions and psychomotor regression.

Most of the patients have died between 25 and 30 years of age; a few live to the fourth decade.

The progressive tetraplegia and scoliosis lead to respiratory insufficiency, the usual cause of death. The majority of patients die at the end of the second decade.

A 10-year-old girl was investigated at 5 years of age for delayed milestones. She was the first child of nonconsanguineous parents, both coming from the Saguenay-Lac-Saint-Jean region. Pregnancy and delivery were normal. She sat at 2 years of age and stood at 3 years of age. Her vocabulary was limited to a few words. She was described as a passive child with limited interest in her environment.

At the time of her admission, her physical examination revealed typical dysmorphic features: elongated and inexpressive facies, hypertelorism, high arched palate, and a hypoplastic maxilla. The head circumference was on the 90th percentile (52.5 cm). She had a diffuse hypotonia and weakness, more marked in the lower extremities. Deep tendon reflexes were one fourth in the upper extremities and absent in the lower extremities.

MRI of the brain showed a complete absence of the corpus callosum. Nerve conduction studies showed absence of sensory action potentials in the median and ulnar nerves. The distal motor latencies of the median nerve and posterior tibial nerve were 2.2 and 2.8 m/sec, and the conduction velocities were 39 and 46 m/sec, respectively. EMG of the quadriceps muscle revealed features of denervation and reinnervation. A sural nerve biopsy was not performed.

Two years following initial evaluation, she took a few steps unassisted, but at 9 years of age, she was confined to a wheelchair.

Besides the distinctive clinical features of this hereditary condition, the unique association of agenesis of the corpus callosum and a polyneuropathy, as evidenced by electrophysiological and histological studies of nerve and muscle, is the hallmark of the syndrome.

EMG examination reveals a neurogenic pattern. In most cases, electrophysiological findings consist of the following: (1) absence of sensory action potentials, (2) a slight reduction of motor nerve conduction velocity with values ranging from 35 to 40 m/s, and (3) signs of denervation and reinnervation in the distal muscles of the lower extremities (19).

CSF analysis reveals a mild increase in total protein and IgG immunoglobulin at the upper level of normal (19).

Sural nerve biopsies show signs of a chronic demyelinating neuropathy and virtually total absence of large myelinated axons (19; 07). Electron microscopy discloses myofibrillar degenerative changes, rather characteristic of a denervation process. Only 2 autopsies have been performed in such cases (07). Swelling of the axons in the nerve roots was noted and accompanied by a relative decrease in packing density of neurofilaments. This axonal swelling leads to stretching and thinning of the myelin sheath with demyelination and remyelination and, finally, axonal degeneration. The larger axons are particularly damaged and, thus, are depleted in sural nerve biopsies. Carpenter noticed that the same axons that show such abnormalities in nerve roots appear normal in their intramedullary course within the spinal cord; the abnormality is particularly brought out in the environment of the subarachnoid space or of Schwann cell investment (07). Scattered swollen axons could also be identified in the white matter of both autopsied cases; in one of these cases, progressive axonal destruction had occurred in the posterior part of the corpus callosum. Consistent with these findings, Carpenter proposed that it is likely that fibers that begin to cross from hemisphere to hemisphere to form the corpus callosum are exposed to some factor in the CSF environment that damages them, resulting in agenesis of the corpus callosum. Thus far, no specific metabolic abnormality has been found.

Mapping. Most patients with Andermann syndrome are found in the Charlevoix County and Saguenay-Lac-Saint-Jean region in the Province of Québec. Close to 250 cases have been identified (05; 03; 09). Genetic analysis demonstrates an autosomal recessive mode of inheritance. Genealogical studies reveal that 45 affected individuals in this region could be traced back to a French couple who married in Québec City in 1657, thus, demonstrating a founder effect. De Braekeleer and colleagues have shown that in the Saguenay-Lac-Saint-Jean region, the incidence at birth and the carrier rate, respectively, are 1 in 2117 liveborns and 1 in 23 inhabitants (09). Remote consanguinity was found in several families, but the mean kinship coefficient was 2.7 times higher in the syndromic group than in a control group. The genealogical reconstruction suggests that a unique mutation accounts for most, if not all, of the cases in that particular region. It is of interest that although the common ancestors carrying the gene for the condition originated in France, no case (so far) has been described in that country.

Casaubon and colleagues performed linkage studies using 120 microsatellite DNA markers in 14 French Canadian families and mapped the ACCPN locus to a region of 4cM on chromosome 15. Haplotype analysis and linkage disequilibrium confirm a founder effect (08). The haplotype analysis with 2 markers of chromosome 15q13-q15 has been performed on the affected siblings of an Algerian consanguineous family. The children were homozygous for both markers, again suggesting genetic homogeneity in this syndrome (20). The same has been found in 1 Turkish girl (12).

Molecular genetics. Howard and colleagues were able to identify the mutated gene SLC12A6, which encodes the K+-Cl- transporter KCC3 (18) and maps within the ACCPN candidate region. Four distinct protein-truncating mutations were found: 2 in the French Canadian population and 2 in non-French Canadian families. These authors suggest that loss-of-function mutations of SLC12A6, encoding KCC3, are responsible for the peripheral neuropathy associated with the syndrome, making Andermann syndrome the first hereditary sensorimotor neuropathy to be attributed to defects in an ion transporter. Uyanik and colleagues have reported 3 additional cases of Andermann syndrome of German and Turkish descent, 2 of which were found to have a different truncating mutation of KCC3 gene and 1 with a homozygous missense mutation of KCC3. The phenotype of this last case had all the usual features of Andermann syndrome except for the unusual findings on the MRI of disseminated white matter hyperintensities and a much milder motor-sensory neuropathy (26). Salin-Cantegrel and colleagues were interested in finding new mutations in non-French Canadian populations (22). These authors identified mutations in exon 22 of KCC3: a novel mutation (del + 2994-3003; E1015X) in 1 family, as well as a known mutation (3031C --> T; R1011X) found in 5 unrelated families and associated with 2 different haplotypes. This last mutation has also been found in a 5-year-old Turkish boy (10). Salin-Cantegrel and colleagues concluded that KCC3 mutations in exon 22 constitute a recurrent mutation site in this syndrome, regardless of ethnic origin, and are the most common cause in non-French Canadian families analyzed thus far. The same authors have reported a novel and more distal HMSN/ACC-truncating mutation (3402C à T; R1134X) in another patient, which eliminates only the last 17 residues of the protein (23). Within novel mutation, there are 10 KCC3 mutations identified, including 6 frameshift, 2 non-sense, and 2 missense mutations.

The same group conducted further research to understand the molecular mechanisms of the syndrome pathogenesis and the exact role of KCC3 in the development of the nervous system (24). They discovered that the C-terminal domain (CTD) of KCC3, which is lost in most of the syndrome-causing mutations, directly interacts with brain-specific creatine kinase (CK-B), an ATP-generating enzyme that is also a partner of KCC2. These authors concluded that this physical and functional association between the cotransporter and CK-B is, therefore, the first protein-protein interaction identified to be potentially involved in the pathophysiology of Andermann syndrome. In addition, Shekarabi and colleagues established that in a conditional KCC3 knockout mouse model, KCC3 is important for axon volume control (25). They also demonstrate that the neuropathic feature of HMSN/ACC are predominantly due to a neuronal KCC3 deficit whereas the auditory impairment secondary to a marked decrease in axonal tracts serving the auditory cortex is due to loss of non-neuronal KCC3 expression. The mouse model developed severe neuropathy, reduced sensitivity to inflammatory pain, hypoplasia of the corpus callosum, and an auditory impairment. This study suggests a role for KCC3 in callosal as well as central and peripheral nervous system maintenance. The identification of the mutated gene KCC3 allows a prenatal diagnosis. Further research by Ding and Delpire to establish the specific neuronal loss of KCC3 in knockout mouse lines has found that it involves the parvalbumin-positive neurons (13). This suggests a crucial role of these neurons in the development of the locomotor deficit.

As the development of the corpus callosum is completed by the sixth month, the prenatal visualization of this structure may not be feasible before 20 weeks (27). Furthermore, in one third of patients with the syndrome, the presence of a corpus callosum constitutes another important limitation in a prenatal ultrasonographic diagnosis of the condition.

The clinical features of Andermann syndrome are sufficiently distinctive that it is unlikely to be confused with any other syndrome. No other disorder with partial or complete agenesis of the corpus callosum is associated with congenital sensorimotor neuropathy.

The diagnosis of Andermann syndrome is confirmed by the unique association of distinct clinical features, especially in a population at risk, with the findings of partial or complete agenesis of the corpus callosum on CT or MRI examination. In addition, electrophysiological studies show evidence of a sensorimotor neuropathy with signs of denervation, absence of sensory action potentials, and reduction of motor nerve conduction velocity.

Treatment is symptomatic. Respiratory infection should be treated promptly. Vigorous physiotherapy and bracing are helpful to prevent contractures. In most cases, surgery for scoliosis is performed in the early teens. An electric wheelchair should also be provided.

Pulmonary function tests and cardiac assessment should be performed before general anesthesia. Precaution is indicated as for any other case with flaccid tetraplegia and progressive scoliosis.