Donepezil belongs to a class of reversible cholinesterase inhibitors that is chemically unrelated to tacrine or physostigmine. 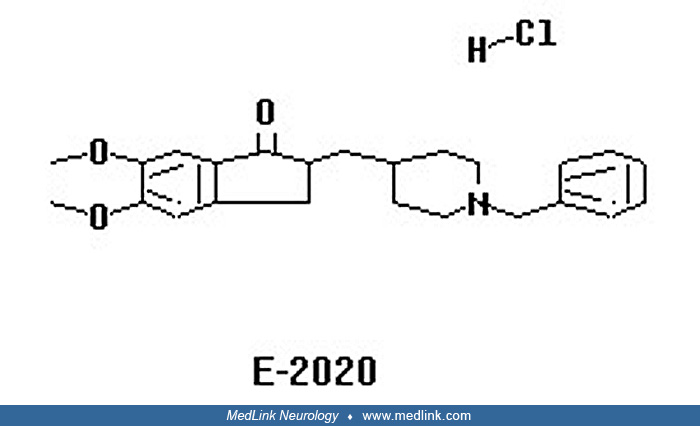 Pharmacodynamics. Donepezil raises the concentration of acetylcholine (Ach) in brain synapses by preventing its breakdown, and this then stimulates the muscarinic receptors. In contrast to tacrine and physostigmine, which inhibit cholinesterase throughout the body, donepezil is specific for cholinesterase found in the brain and, therefore, is devoid of peripheral cholinomimetic adverse effects. Metadynamic simulation has shown that presence of donepezil near the active site of acetylcholinesterase (AChE) can inhibit its approach for acetylcholine hydrolysis and the docking study reveals that the drug molecule inside the active gorge of human AChE restricts the approach of ACh to Ser203 for the hydrolysis process, providing an insight into the mechanism of inhibition of AChE by donepezil (12).

Positron emission tomography has shown inhibition of cerebral acetylcholinesterase activity in Alzheimer disease patients following treatment with donepezil. Functional MRI has demonstrated that donepezil produces activation in the ventrolateral prefrontal cortex. In a randomized placebo-controlled study, donepezil treatment was shown to stabilize functional connectivity during resting state and brain activity during memory encoding in Alzheimer disease (29). Measurement of event-related potentials before and after 22 to 23 weeks of treatment with donepezil has revealed that prolonged P300 latency decreases as cognitive capability increases with improvement in recent memory (05).

Experimental studies in mice suggest that donepezil may improve cognitive function by increasing the hippocampal production of insulin-like growth factor I through sensory neuron stimulation, which may not be dependent on its acetylcholinesterase inhibitory activity. Donepezil treatment has been shown to rescue the cholinergic neurons in the medial septum from the neurodegeneration by olfactory bulbectomy in mice and significantly improve cognitive deficits (36). This is the first in vivo evidence of a neuroprotective effect of donepezil. However, in patients with mild Alzheimer disease, treatment with donepezil did not alter the progression of hippocampal deformation (34). MicroRNA-206 (miRNA-206 or miR-206) is now known to be involved in the pathogenesis of Alzheimer disease by suppressing the expression of brain-derived neurotrophic factor (BDNF) in the brain. A study has found that the expression of miR-206-3p is significantly upregulated in the hippocampus and cortex of Abeta precursor protein (APP)/presenilin-1 (PS1) transgenic mice, and donepezil administration significantly reversed this dysfunction (33). Furthermore, enhancement of the miR-206-3p level by AgomiR-206-3p significantly attenuated the antidementia effects of donepezil in APP/PS1 mice. The results of this study suggest that miR-206-3p is involved in the antidementia effects of donepezil.

Several disease modifying effects of donepezil, which include protection against amyloid β, ischemia, and glutamate toxicity; slowing of progression of hippocampal atrophy; and up-regulation of nicotinic acetylcholine receptors, are independent of cholinesterase inhibition support the potential of donepezil as a neuroprotective agent for Alzheimer disease rather than just symptomatic treatment (14). Results of a longitudinal study indicate significant improvement in rCBF in hypoprofused areas of the brain corresponding to improvement in ADAS-cog scores in patients with late-onset Alzheimer disease (28).

Pharmacokinetics. After a single oral dose of donepezil, peak plasma concentration is reached in 3 to 5 hours. It is well absorbed and has a bioavailability of 100%; this percentage is not affected by the time of day or food intake. It is extensively metabolized by the hepatic isoenzymes CYP2D6 and CYP3A4. Absorption and excretion rates of donepezil are slower in elderly than in young volunteers, but dose modification is not considered to be necessary in the elderly. According to the manufacturer, the pharmacokinetics of donepezil are minimally affected by hepatic or renal disease and no dose adjustment is necessary for these conditions.

Therapeutic drug monitoring. Recommended therapeutic range of donepezil is 30 to 75 ng/L. A novel, simple, specific, and sensitive high performance liquid chromatography assay for the detection and quantification of donepezil in serum of demented patients showed that concentrations suggested as therapeutic in the literature may only be reached either by high dosages or by using inhibitory metabolic effects of comedications (15).

A review of double-blind, placebo-controlled randomized trials using memantine or donepezil alone or in combination for moderate to severe Alzheimer disease showed that both drugs were equally effective as monotherapy and that there was no advantage in combining both (18).

A systematic review of controlled clinical trials reveals moderate quality evidence that patients with Alzheimer disease treated for periods of 12 or 24 weeks with donepezil show small benefits in cognitive function, activities of daily living, and clinician-rated global clinical state with no increase of effect on dose of 23 mg/day as compared to 10 mg/day but with higher rate of dose-related adverse events and discontinuation of therapy (02).

Donepezil is indicated for the treatment of mild to moderate Alzheimer disease.

Some evidence indicates that the positive benefits of donepezil can extend over several years, although the natural course of the disease is not altered. Donepezil does not cure Alzheimer disease and does not prevent the eventual outcome of the disease: progressive neurologic and physical deterioration and death.

Patients with a known hypersensitivity to piperidine derivatives should not take donepezil.

Genotyping may help in the selection of Alzheimer disease patients for donepezil therapy; those who carry the ApoE epsilon4 allele may respond more favorably to donepezil than epsilon4 noncarriers. Imaging biomarkers may also be helpful as a guide to treatment. Combined MRI and SPECT may help to predict response to donepezil treatment in patients with Alzheimer disease, as responders have more severe damage in the cholinergic system and less prominent frontal hypoperfusion than nonresponders. Lack of response to donepezil with more widespread degeneration of the central cholinergic pathways as compared to patients who are responders may be explained by the preservation of some degree of endogenous release of acetylcholine in the latter (03). A 4-hour brain perfusion single photon emission tomography can be used to predict donepezil response at 6 months (31).

The goals of the treatment are to slow the progression of the disease and to improve the cognitive function of the patients. Cellular and molecular effects of donepezil are expected to slow the progression of Alzheimer disease. No hard and fast rule exists as to the point that treatment should be discontinued. Therapy is continued as long as the patient shows a beneficial response. Significant deterioration after cessation of the treatment is an indication to restart treatment.

According to a recommendation based on a 10-year perspective of donepezil use, the drug can be continued in the severe stages of Alzheimer disease as long as it is well tolerated and clinical decline of the patient is slowed (06).

Donepezil is started at a dose of 5 mg given orally once a day at bedtime. It is increased to 10 mg once a day in the following 4 to 6 weeks depending on the patients response and tolerance level. The FDA has approved a higher-dose (23 mg/day) donepezil formulation for patients with advanced Alzheimer disease.

Geriatric use. Because Alzheimer disease occurs predominantly in the elderly, donepezil efficacy and safety has been studied mainly in this age group.

Pediatric use. Safety and efficacy of donepezil has not been studied in pediatric patients.

Pregnancy. Oral administration of donepezil to pregnant rats and rabbits during the period of organogenesis has not produced any teratogenic effects, but there are no adequate or well-controlled studies in pregnant women. Pregnancy is not an issue in Alzheimer disease, the only approved indication for donepezil. For any other condition, donepezil should be used during pregnancy only if the potential benefit justifies the potential risk to the fetus.

Limited information is available about drug interactions, but the following precautions are recommended:

The most common adverse effects associated with donepezil are nausea, diarrhea, vomiting, syncope, and insomnia, which are mostly related to its cholinergic properties. Adverse events have been listed in more detail in the Physicians Desk Reference. Donepezil-induced myoclonus has been reported in a patient with Alzheimer disease (04).

An open-label extension study has demonstrated the safety of donepezil in mild cognitive impairment, but it was less well tolerated than in patients with Alzheimer disease as determined by comparison of percentage of patients who discontinued therapy due to adverse effects (08).

Extrapyramidal reactions have been reported when donepezil is administered in elderly patients (16).