Memantine hydrochloride was originally synthesized in 1963 at Eli Lilly & Co as an antidiabetic agent but was found to be ineffective in lowering elevated blood sugar. Merz & Co in Germany took it over and, a decade later, showed its effectiveness in Parkinson disease. In 1989, therapeutic action of memantine was shown to be due to antagonism of N-methyl-D-aspartate receptors (11), and it was launched in Germany for the treatment of dementia. Further clinical trials were conducted on its use in Alzheimer disease between 1995 and 2000, and the drug was approved in the European Union in 2002. The FDA approved it for the treatment of moderate to severe Alzheimer disease in 2003. It is marketed in the United States under the trade name of “Namenda” (Forest Laboratories). 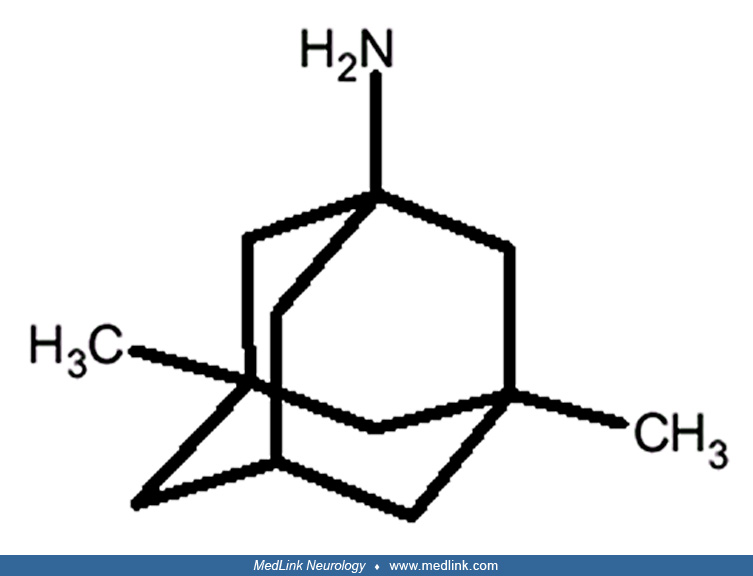 Pharmacodynamics. Memantine is a noncompetitive and low-affinity N-methyl-D-aspartate antagonist, with a high voltage dependency and fast receptor kinetics, but none of the undesirable effects associated with the classical compounds of this category. Rationale for its use is based on the hypothesis that persistent activation of N-methyl-D-aspartate receptors in the brain by glutamate contributes to neurodegeneration and symptoms of Alzheimer disease. Memantine is a neuroprotective agent.

Mechanisms of action of memantine are:

Pharmacokinetics. Memantine is absorbed completely from the gastrointestinal tract, and peak plasma concentrations are achieved in 6 to 8 hours after oral intake. By repeated administration, a steady-state plasma level is reached in 21 days. Under therapeutic conditions in man, the serum levels of memantine with daily maintenance doses of 20 mg range from 0.5 to 1.0 mM. The plasma clearance half-life is 60 to 100 hours. The protein binding is 42% to 45%. The elimination of memantine is mainly by kidneys as unchanged substance as well as its hydroxylated metabolites. Memantine crosses the blood-brain barrier but cerebrospinal fluid level is 20% to 50% lower due to albumin binding in serum.

Therapeutic drug monitoring. A high-performance liquid chromatography with ultraviolet assay for memantine in serum from demented patients has been developed and validated (07). It can be used as a daily routine for analysis of serum samples of patients. Measurements of memantine concentrations suggest that therapeutic levels may only be reached by high doses of memantine.

The M-Best Study (Benefit and Efficacy in Severely demented patients during treatment with memantine) was a double-blind, placebo-controlled, phase III trial of memantine conducted in Sweden on care-dependent patients with severe dementia (25). The trial population consisted of 161 patients, 51% with vascular dementia and 49% with Alzheimer disease. Treated patients were given 10 mg memantine per day for 12 weeks, and evaluation was done using Clinical Global Impression of Change by the physician and Behavioral Rating Scale for Geriatric Patients by the nursing staff. The results supported the hypothesis that memantine treatment leads to functional improvement and reduces care dependence in severely demented patients.

Another study conducted in Germany assessed the efficacy of memantine in the first large-scale systematic and prospective clinical trial of therapeutic intervention in advanced stages of dementia (19). A group of 531 advanced dementia patients, separated by severity according to Global Dementia Scale stages, determined the drug's efficacy on 2 independent levels by assessing physicians' Clinical Global Impression of Change rating at the end of the 6-week observation period and by the elementary ADL (activities of daily living) function levels given by caregivers using the D-Scale-of-Change. Improvement was noted by both caregivers and physicians.

A United States trial of memantine in 2003 involved 32 sites across the country and 252 patients diagnosed with advanced Alzheimer disease. This randomized, 6-month, placebo-controlled, double-blind, multicenter trial was aimed at functional improvement of patients with moderate to severe Alzheimer disease. Several validated scales were used to measure changes in cognition, function, and global performance, including the Severe Impairment Battery, ADL Inventory, and Clinician's Interview-Based Impression of Change. At the end of the study, patients receiving placebo scored more than 40% below patients taking memantine on standard assessment scales.

In a reassessment of 13 randomized controlled trials of Alzheimer disease that were published prior to the end of 2013, memantine therapy showed significant benefits in terms of cognition, mental state, activities of daily life, and the clinician's global impression without significant serious adverse events, although it did increase the risk for somnolence (10).

Memantine hydrochloride is indicated for the treatment of moderate to severe dementia of Alzheimer type.

Memantine hydrochloride is contraindicated in patients with known hypersensitivity to memantine or any of the excipients used in the oral formulation.

Memantine is anticipated to be a long-term neuroprotective therapy and can be safely combined with acetylcholinesterase inhibitors, as shown by results of several clinical trials. In a long-term follow-up of patients with probable Alzheimer disease, for a mean duration of 30 months, combination therapy slowed cognitive and functional decline in Alzheimer disease compared with cholinesterase inhibitor monotherapy or no treatment (01). Addition of memantine to donepezil in patients with moderate-to-severe Alzheimer disease leads to improvement in Activities of Daily Living Inventory and the Severe Impairment Battery (18). A metaanalysis of various studies has shown that the combination of donepezil and memantine led to greater improvement in cognitive functions, behavioral symptoms, and global functions than did donepezil alone in patients with moderate to severe Alzheimer disease (05).

Several studies provide evidence that early initiation of treatment with memantine may maximize clinical success, enabling patients to remain independent for longer and delaying institutionalization (24). A study has investigated the value of serum biomarkers in patients with moderate Alzheimer disease for the identification of patients who are significantly responsive to memantine (23). The results suggest that the logistic regression model and the receiver operating characteristic curve based on patients' serum levels of VEGF, BDNF, IL-6, and IL-1β are a promising approach for diagnosing and choosing the best course of treatment for moderate Alzheimer disease.

The oral daily dose used in clinical trials was 20 mg. Memantine is available as tablets as well as oral solution.

Pediatric. There are no adequate or well-controlled clinical trials documenting the safety of memantine therapy in any illness in children.

Geriatric. Most of the patients treated with memantine are elderly and usually tolerate the drug well. Precautions are required in those with renal impairment. In patients with severe renal impairment, it is recommended that dosage not exceed 5 mg twice daily.

Pregnancy and lactation. Studies on pregnant rats showed no evidence of teratogenesis. Only slight maternal toxicity and decreased pup weight was observed. There are no well-documented or controlled studies of the use of memantine in pregnancy. Use in pregnant patients is recommended only if benefits outweigh potential risk to the fetus. It is not known if memantine is excreted in the milk. Breast-feeding during memantine therapy is not advised.

Anesthesia. No studies or observations have yet been reported of interaction of memantine with drugs used for anesthesia.

Hepatic impairment. Memantine is only partially metabolized in the liver. Pharmacokinetics of memantine in patients with hepatic impairment has not been investigated but is expected to be affected only modestly.

No interactions have been observed when memantine is combined with acetylcholinesterase inhibitors. In a clinical trial, the adverse effects with a combination of memantine and donepezil were like those with donepezil alone.

Memantine can interact with other N-methyl-D-aspartate receptor antagonists, such as amantadine, ketamine, or dextromethorphan, resulting in toxic effects such as psychosis.

Because memantine is eliminated predominantly by kidneys, substrates or inhibitors of CYP450 are not expected to alter the metabolism of memantine significantly.

Drugs that raise urine pH may reduce elimination of memantine and raise blood levels of the drug.

No significant adverse reactions have been encountered that are attributed to the drug. The incidence of various adverse events in patients with Alzheimer disease and other dementias is similar to the background incidence of such events in similar patient populations.

Memantine is rarely associated with movement disorders. There is a case report of a patient with Alzheimer disease who developed chorea and dystonia after inadvertently doubling daily dose by taking extended-release (XR) memantine twice daily, rather than once daily, after the drug was switched from immediate release with 10 mg twice daily (02).

Adverse events reported in clinical trials are listed in the Physician’s Desk Reference.