Introduction
A syndrome is a constellation of symptoms, and often signs (physical changes in the body), that taken together indicate to a doctor that a specific part or organ of the body is not functioning as it should. Rarely, a medical syndrome may be diagnostic of one disease process, but more commonly a syndrome has many potential causes.

Syndromes are often named after the astute doctor who observed and then described the complex combination of symptoms and signs.

Horner syndrome is named after the Swiss ophthalmologist who first described the changes seen in the eye of a patient in 1869. There was a French doctor at about the same time, named Bernard, who also described the syndrome, so it is sometimes also known as Bernard-Horner syndrome.

As described in 1869 by Horner, the syndrome is manifest in one eye, as the combination of a slightly droopy upper eyelid, a smaller pupil, the perception that the eyeball is sunken into the socket, and, in some cases, a decreased sweating of the face - all on the same side.

Anatomy
To understand the mechanism of Horner syndrome, you need to understand the function of the pupil. The ability to see (vision) is analogous to a camera taking a photograph. Most of us understand that when taking a picture in bright light, the camera adjusts the 'aperture' of the lens, making it smaller. In reduced light, the aperture is enlarged, and this allows in more light. The pupil of the eye (the black hole) is the aperture of the human eye. The pupil constricts in bright light and dilates in darkness. The pupil is controlled by circular muscles that contract and relax according to the amount of light that the brain detects. This reflex muscle action that is dependent upon the brightness of light, explains why our eyes 'adjust' when we go, for example, into the movies after they have started, or when we come out at the end, into bright sunlight. It is a reflex; the adjustment happens without conscious awareness or control.

The contraction and relaxation of the circular muscles are controlled by nerves that are part of an internal 'automatic' nervous system (known as the autonomic nervous system). These nerves follow complex pathways from the brain, down the spinal cord, and in the case of the head and neck, leave the spinal cord in the cervical spine to then travel along the arteries, wrapped around the outer coat of the blood vessels to reach the various organs. The main artery to the brain and eye on each side is the carotid artery.

Here is a diagrammatic representation of the autonomic nerves to the eye. 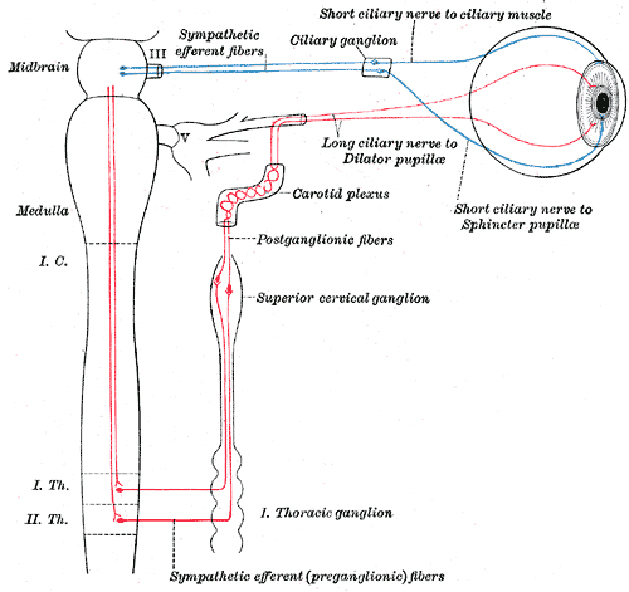 Symptoms
If you have Horner syndrome, the problem relates to damage to the autonomic nerves (the sympathetic nerves - in RED ) and the signs (below) are, on that one side: 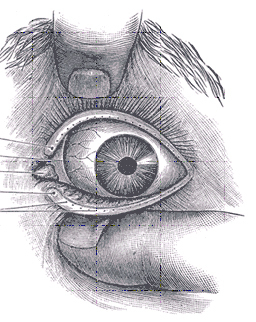 Often patients are not aware of any problem, but rather friends or family will comment on the droopy eyelid or comment that one eye is bigger than the other. However, in Horner syndrome it is not the bigger eye that is abnormal, but rather the smaller pupil.

Causes
It was implied that medical syndromes most often have multiple possible causes and Horner syndrome is no exception. Horner syndrome is not a specific diagnosis or disease. Your neurologist or ophthalmologist will recommend several investigations to try and find where, along the long pathway depicted in the first diagram (the sympathetic chain) is abnormal.

There are many potential sites or causes:

Finally, there is a small proportion of patients in whom, even after extensive investigations, no cause is found, although a careful long-term follow up is usually needed to ensure that nothing develops.