The initial diagnosis of seizure is based on the history. If first-line treatment fails, the diagnosis is (or should be) questioned and verified. At epilepsy centers, where selected challenging patients are seen, the evaluation typically begins with video-EEG monitoring, which allows a clear diagnosis in the vast majority of cases (07; 05). Typically, video-EEG will answer the following questions:

In this article, we will focus on the first 2 questions. Is it epilepsy or not? If it is not epilepsy, what is it? In the vast majority of cases, the question of “epilepsy or not” is easily answered, so we will focus on the relatively small proportion of situations in which, despite good EEG or video-EEG recordings, the question remains difficult to answer. We will divide “ambiguous” events into clinical and electrographic events.

Facial movements. Mouth movements may be misinterpreted as seizure activity because partial seizures often include clonic facial twitching or oral automatisms. Nonepileptic facial movements can represent tics, hemifacial spasm, or other abnormal movements (01). Tics are brief and stereotyped in a given patient, and although they are worse under stress, they tend to occur regularly throughout the day rather than in discrete episodes. Tics are also suppressible by the patient with concentration. However, when suppressed, the urge builds up (like a compulsion), and the tic is eventually produced, triggering a brief feeling of “just right.” Tics may be related to involvement of the basal ganglia and related cortico-striato-thalamo-cortical circuits, and the dopaminergic neuronal system (17).

Hemifacial spasm can superficially resemble focal motor seizures, but the unilateral facial twitching typically affects the periorbital muscles initially, rather than the perioral area, and then spreads to other ipsilateral facial muscles over months or years. Unlike seizures, hemifacial spasms are sometimes suppressible by engagement in motor activity and disappear during sleep (10). Hemifacial spasm is a progressive disorder that eventually results in fixed facial weakness or blepharospasm. It is related to hyperexcitability at the facial nucleus and brainstem structures (15). 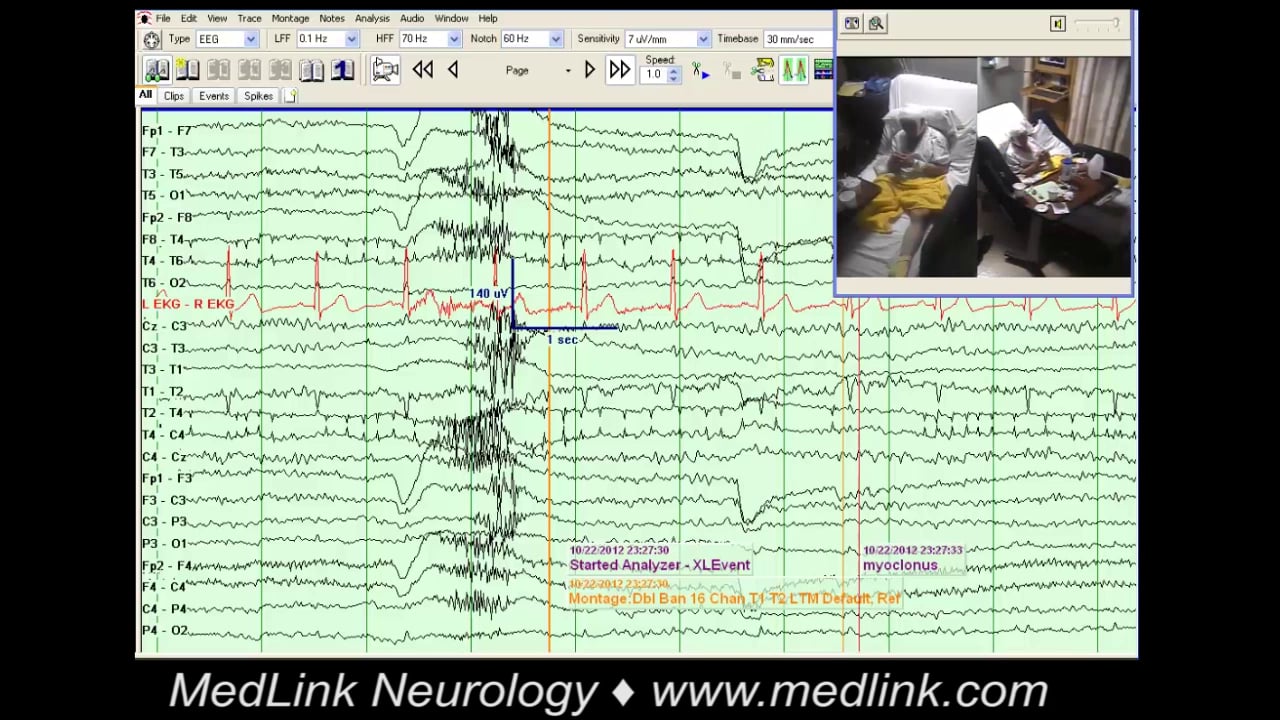 Ambiguous paroxysmal events: Brief isolated jerk
A nonepileptic, entire body jerk typically occurs in transition to stage 1 non-REM sleep, (hypnicjerk). These jerks occur at all ages and can lead to evaluation of seizures, especially when they are unusually violent. In this vide...

Hypnic jerks are a physiologic type of myoclonus that commonly occurs in the healthy population during the transition to N1 non-REM sleep. The person will often have the sensation of falling followed by a stereotyped body jerk. This is a benign and common occurrence and is easily identified by video-EEG, with absent EEG correlate associated with the jerk.

Segmental spinal myoclonus is associated with various spinal cord lesions, including neoplastic, infectious, traumatic, and B12 deficiency (19). The context (evidence for myelopathy) makes the diagnosis relatively easy. It may be caused by loss of inhibitory function of dorsal horn interneurons and abnormal hyperactivity of anterior horn cells of the spinal cord. Segmental myoclonus can be brainstem such as palatal myoclonus.

Syncope. Syncope is a transient self-limited loss of consciousness due to transient global hypoperfusion and is mistaken for seizures when it is “convulsive.” The tonic or clonic movements are brief (less than 15 seconds) (14). EEG have very low diagnostic yield in evaluating syncope cause. Vasovagal syncope, arrhythmias, carotid hypersensitivity, and aortic stenosis are recognizable causes of syncope, as well as drugs (beta and alpha blockers) and metabolic causes (09).

Pseudosyncope. Pseudosyncope refers to episodes that look like syncope, but are psychogenic. Whatever the cause, syncope results in a predictable sequence of EEG changes when captured on EEG: high-amplitude slowing followed by suppression (20). Thus, a syncope-like event (complete loss of consciousness) with a normal alpha rhythm is diagnostic of psychogenic pseudosyncope. Because most patients with refractory syncope do not undergo video-EEG monitoring, it is likely that pseudosyncope is underdiagnosed and could account for a significant proportion of “syncope of unknown origin” (04). 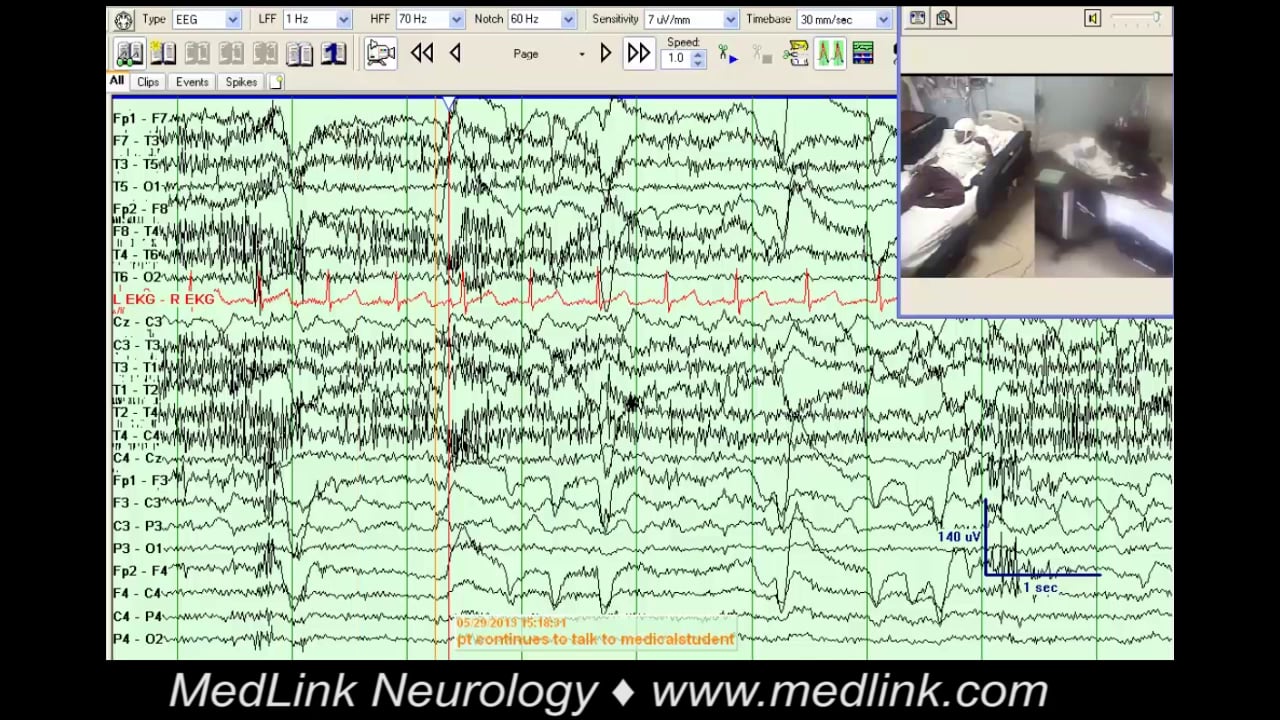 Pseudosyncope
The patient felt down on left (with normal EEG before), followed by prominent alpha rhythm. Video EEG is crucial in diagnosis of pseudosyncope. (Contributed by Dr. Selim R Benbadis.)

Focal motor seizures without EEG change. Because focal seizures in clear consciousness usually have no surface EEG change, the diagnosis cannot depend on the absence of ictal EEG. Thus, if symptoms are consistent with this type of seizure, semiology becomes more important than ictal EEG. In this situation, the diagnosis is entirely based on semiology (video) and whether the movements are the type seen in epileptic seizures (clonic or tonic). 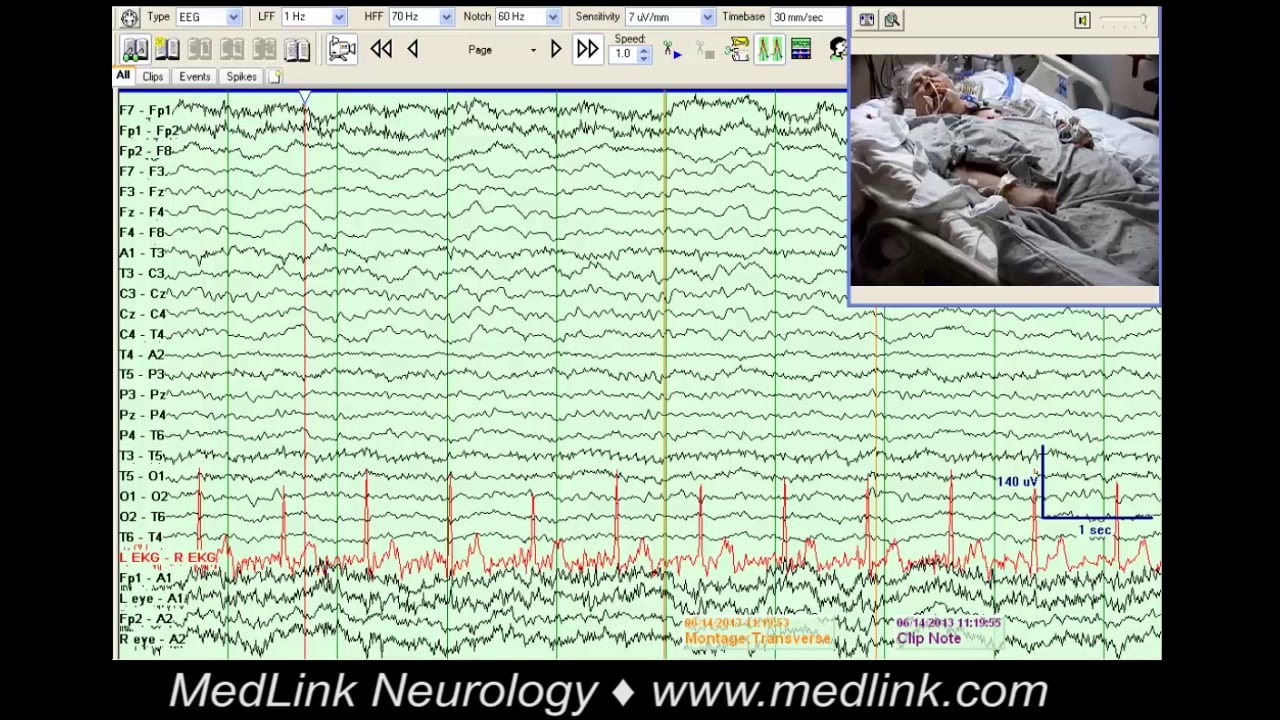 Simple partial seizure without EEG changes
This patient had aura followed by behavioral arrest, and he developed gesticulated fingers (dystonic) of the right hand. This EEG showed no focal abnormality. Normal EEG is common during simple partial seizure and does not exclude...

Focal seizures with subjective symptoms (auras). These include common epileptic auras such as rising epigastric sensation, déjà-vu, and fear and usually do not show any ictal surface EEG discharge. Because they are also relatively common in patients without epilepsy, these symptoms can only be diagnosed as epileptic if the EEG shows epileptiform discharges or if they evolve into more obvious seizures (the company they keep). Less specific symptoms (cephalic, “undescribable” sensations) are even more difficult to diagnose and, when in doubt, should not lead to a diagnosis of epileptic seizures.

In the ICU setting. Patients often have various movements or behaviors that are not epileptic, but can superficially mimic seizures.

Decorticate or decerebrate posturing typically occur in response to noxious stimuli. Decorticate posturing occurs when there has been interruption to the corticospinal pathways above the midbrain. Clinically, the patients will have adduction and slow flexion of the arms, wrists, and fingers in the upper extremities. In the lower extremities, there will be extension, internal rotation, and plantar flexion. Decerebrate posturing occurs with brainstem damage below the level of the red nucleus. Clinically, patients may have extension of the head and trunk (opisthotonus); arms will be adducted, extended, and internally rotated; and legs will be extended and internally rotated, with plantar flexion and inversion of the feet (02).

Tremors or shiver-like movements are relatively frequent in the ICU setting or in patients coming out of general anesthesia. One key to distinguishing tremors is that a tremor is a to-and-fro oscillating movement across a joint. Tremors are not tonic, clonic, or myoclonic in nature.

Wickets waves. Wickets waves are 6 to 11 Hz medium- to high-voltage sharp transients in the temporal regions. They do not clearly stand out and arise from ongoing activity of the same frequency. These are, by far, the most common benign waveforms misinterpreted as epileptiform and are often responsible for the erroneous diagnosis of epilepsy (08; 02). 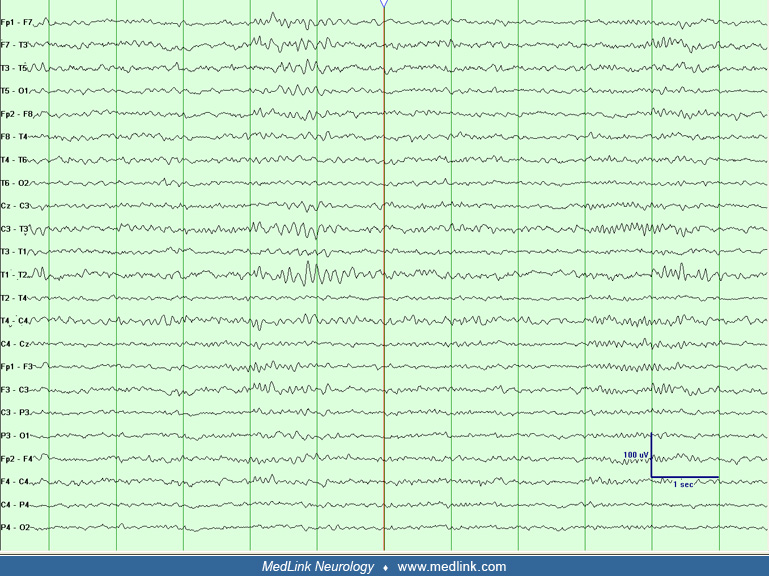 Small sharp spikes (SSS). SSS are sporadic unilateral or bilateral temporal spikes that occur during light sleep. They are “small” (< 50 microV) and “sharp” (< 50 msec), and are known as benign epileptiform transient of sleep (BECTS). 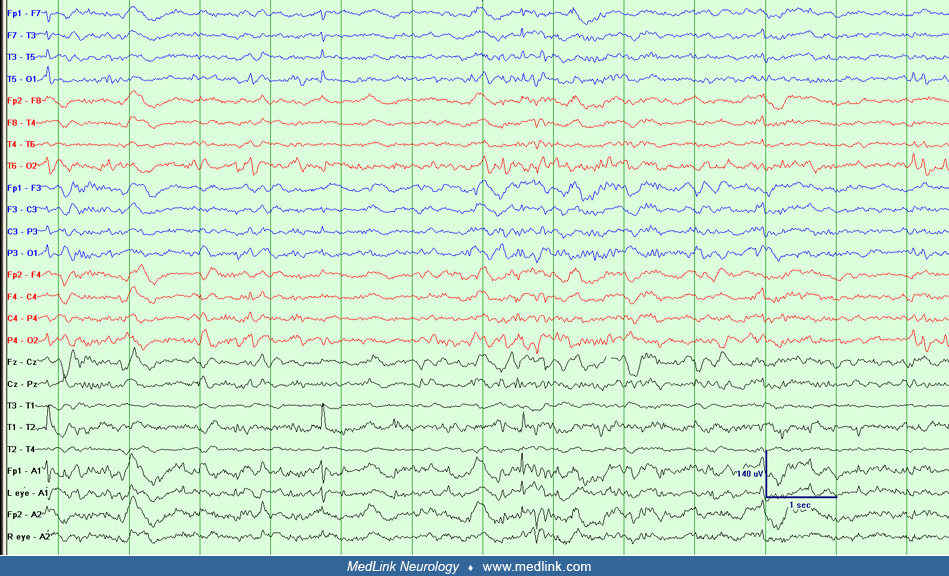 Subclinical rhythmic electrographic discharge of adults (SREDA). SREDA typically consists of rhythmic theta activity over the posterior temporoparietal region lasting for many seconds to several minutes, but without the evolution typical of focal seizures. This is a pseudoictal pattern.

Rhythmic midtemporal theta of drowsiness (RMTD). RMTD, also known as “psychomotor variant,” are 4 to 7 Hz rhythmic discharges, maximum in the midtemporal region, unusually unilateral, and, again, without evolution. The morphology is typically notched, flat-topped, or sharply contoured. Bursts last for 1 to 30 seconds. 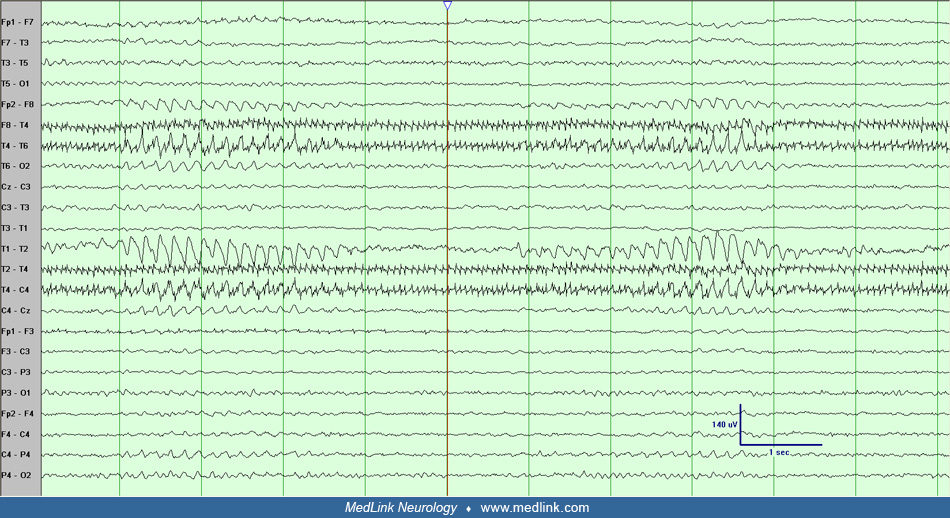 Rhythmic midtemporal theta of drowsiness (RMTD)
In this figure, RMTD is unilateral. However, RMTD can be bilateral or independent. (Contributed by Selim R Benbadis MD.)

Breach rhythm. Breach rhythm consists of high-voltage activity over a skull defect and can contain sharp transients that can mimic interictal epileptic discharges. However, they are usually accompanied by a baseline amplitude asymmetry (06). 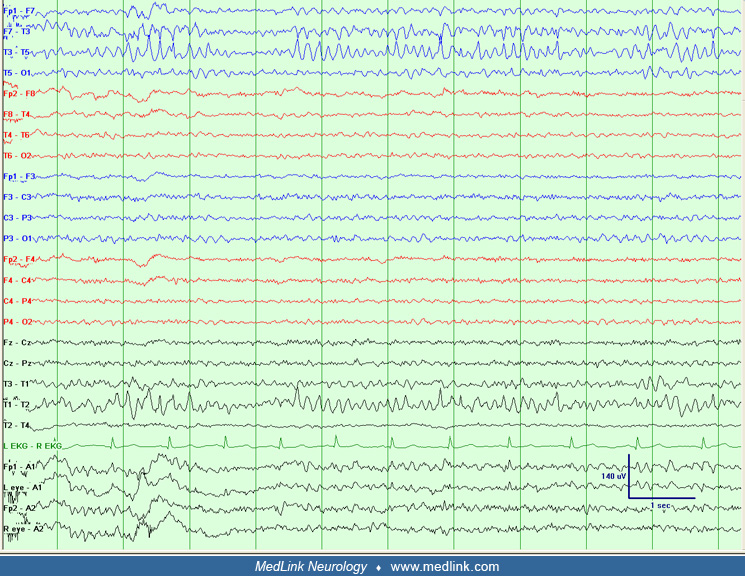 Artifacts due to rhythmic movements (voluntary or tremors) are usually easily clarified by review of video. 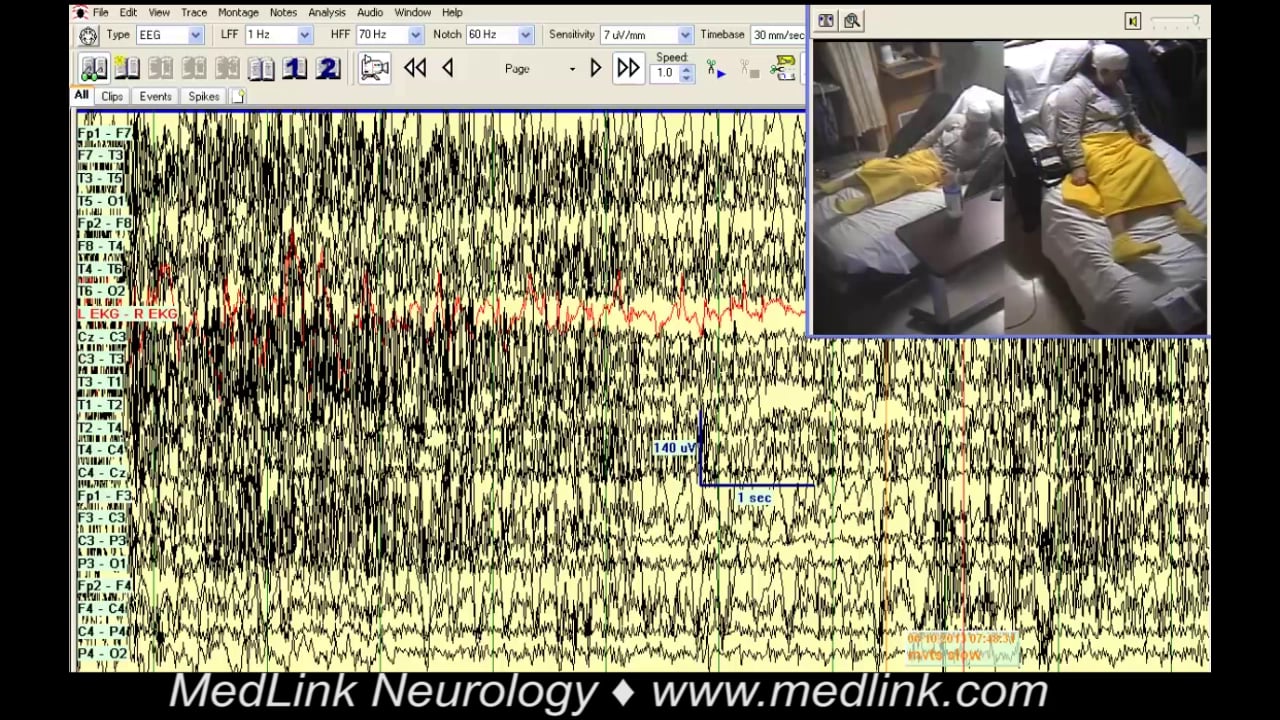 Ambiguous paroxysmal events: rhythmic movements
Artifact caused by rhythmic movement can be difficult to distinguish from cortical pattern. Psychogenic nonepileptic seizures typically have less variability in frequency within a narrow range of duration. It has been shown that t...

A harmonic of a normal alpha rhythm can occasionally generate a rhythmic discharge that mimics seizures, although there is no evolution. This discharge is identified by the fact that the rhythmic activity is half or twice the alpha frequency. 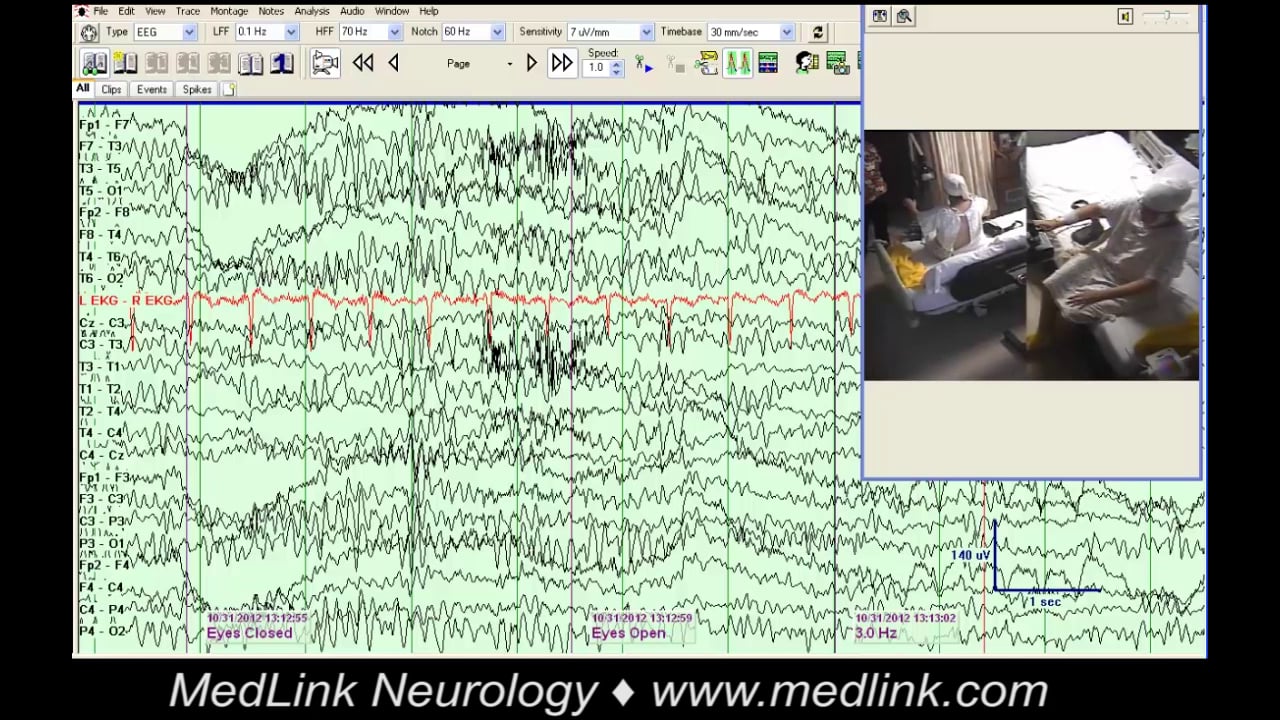 Ambiguous paroxysmal events: harmony
Frequency of photic stimulation driving can be equivalent to stimulus frequency (f), harmonic driving (nf), and subhormonic driving (f/n), where n is 2 or greater.This driving is not visual evoked potentials that occur with stimul...

Periodic lateralized epileptiform discharges (PLEDs), generalized periodic epileptiform discharges (GPEDs), and other generalized patterns such as triphasic waves are easy to identify and are only “ambiguous” in terms of their significance, ie, ictal, interictal, or nonepileptogenic. PLEDs and GPEDs are EEG discharges, usually epileptiform in appearance, that occur at a relatively constant periodic interval. In most cases, PLEDs are caused by acute focal destructive structural lesions (most commonly stroke). GPEDs can be due to severe metabolic disturbances, including anoxia, and can be indicative of nonconvulsive status epilepticus. In practice, whether a continuous generalized periodic pattern represents status epilepticus will usually require a very careful clinical assessment, CT/MRI, and other investigations (01). PLEDs that evolve or are associated with rhythmic fast, or sometimes rhythmic delta, activities (PLEDS-plus) are strongly associated with clinical seizures and status epilepticus (16).