The author reviews the clinical neurotoxicity of the antiarrhythmic agent amiodarone, an amphiphilic drug that forms intralysosomal lipid complexes in multiple tissues. The most common amiodarone-related neurotoxicities are tremor, ataxia, and peripheral neuropathy; more infrequent neurotoxicities include myopathy, optic neuropathy, basal ganglia dysfunction, encephalopathy, and pseudotumor cerebri. The neuropathy is usually a subacute to chronic sensorimotor polyneuropathy with axonal, demyelinating, or mixed features.

Amiodarone is a di-iodinated benzofuran derivative initially developed in the 1960s as an antianginal agent; it was later used as a cardiac antiarrhythmic agent in the management of supraventricular and ventricular arrhythmias. It is approved in the United States for the treatment of refractory and life-threatening ventricular arrhythmias. Like bretylium and sotalol, it is a class III antiarrhythmic agent and shares the capacity to prolong the duration of action potentials and refractoriness in Purkinje fibers and ventricular muscle (51). Neurotoxic side effects were first described in the 1970s and consist principally of a sensorimotor polyneuropathy, tremor, and ataxia and more infrequently, myopathy, optic neuropathy, basal ganglia dysfunction, encephalopathy, and pseudotumor cerebri. Dronedarone, a new drug approved in 2009 for atrial fibrillation, is structurally related to amiodarone, but noniodinated, and it may have a more favorable overall safety profile (14).

The clinical presentation of neuropathy related to chronic amiodarone therapy is that of a symmetric, subacute to chronic, sensorimotor polyneuropathy with distal predominance; some reports note proximal weakness, and occasionally the neuropathy is predominantly motor (37; 30; 36; 11; 45; 03; 21; 01; 19; 46). The evolution may be rapid, mimicking Guillain-Barré syndrome (46). There is a glove-stocking loss of all sensory modalities, depressed reflexes, and an ataxic gait. There is one report of autonomic neuropathy (33). In terms of acute toxicity, a case of acute suicidal self-administration of 8 grams of oral amiodarone resulted in profuse sweating, prolonged QT interval, and sinus bradycardia but no untoward effects over 3 months of followup (04).

A few patients have developed a clinical myopathy, with or without associated neuropathy, with a proximal pattern of weakness and occasionally myalgia (37; 10; 15; 19; 46). Dysphagia occurred in 3 of 4 cases in one series (20). Serum CK may be normal or elevated (20). One report describes a single patient with reversible acute severe diffuse muscle cramps after initiation of intravenous amiodarone therapy (53). An inadvertent intraarterial injection of amiodarone in one patient resulted in thrombotic occlusion at the injection site and a subsequent severe compartment syndrome of the arm (59).

Tremor with (or usually without) neuropathy is the most frequent neurotoxic side effect reported, occurring in 43% and 39% of patients in 2 large series (11; 43) and appearing early in the course of therapy. It is a 6 to 10 Hz action tremor, bilateral and symmetric, and clinically indistinguishable from essential tremor (11). Gait ataxia is also common, occurring in 7% and 37% of cases in these same series (11; 43). It is not always explainable on the basis of neuropathy and is occasionally associated with limb ataxia and other findings clearly suggesting cerebellar dysfunction (11; 01; 28; 12). 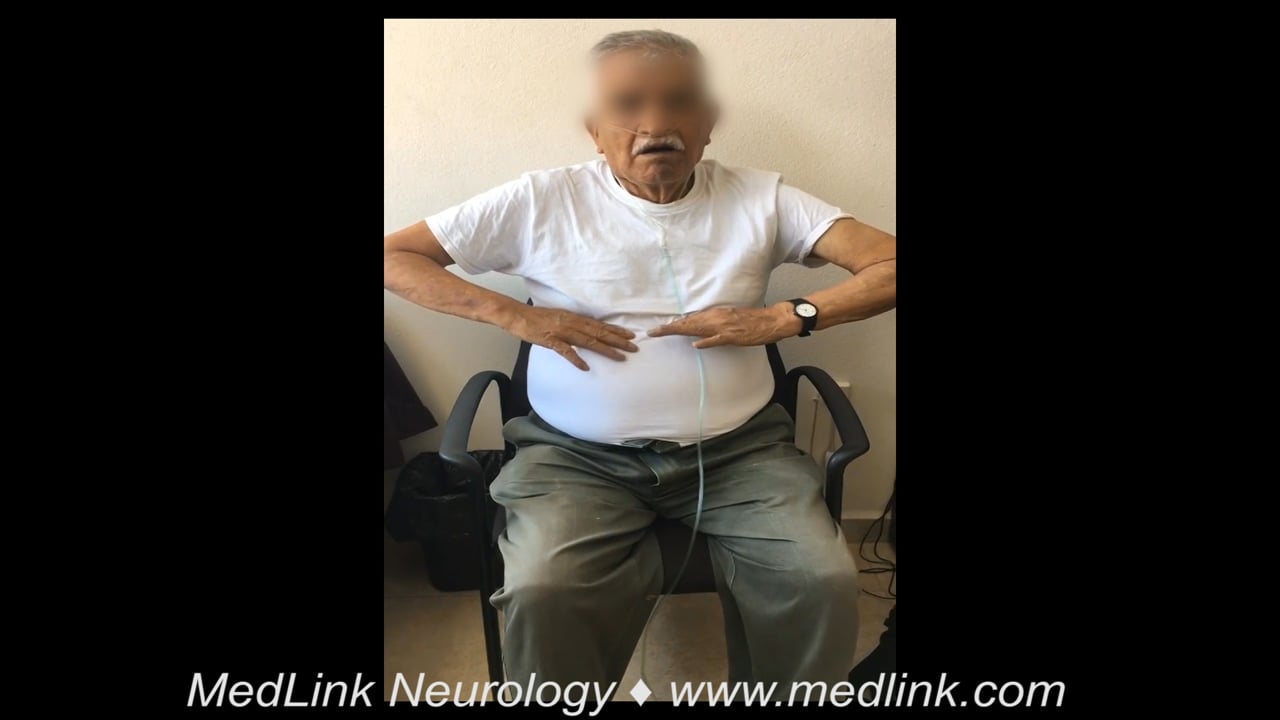 Asterixis due to amiodarone
This is a 79-year-old male with sudden onset asterixis secondary to amiodarone hydrochloride. He also has cognitive decline and gait ataxia, which are typically observed as neurologic toxic effects of this medication. There was no...

Optic neuropathy may occur and is usually characterized by insidious onset and slow progression of bilateral visual loss, usually associated with optic disc swelling (18; 34; 40; 31; 39; 44; 26; 57; 55; 38). Alternatively, the presentation may be acute or the localization retrobulbar (25).

Additional neurotoxicity, based on a handful of case reports, includes parkinsonian features of rest tremor, bradykinesia, or rigidity (58), other basal ganglia dysfunction including myoclonus, hemiballismus, and dyskinesia (43; 58), as well as encephalopathy with EEG slowing (43) and pseudotumor cerebri (09), all reversible with discontinuation of the drug. In a case series of 126 patients with idiopathic bilateral vestibulopathy, 12% had a history of preceding amiodarone treatment (22).

Whether mild or severe, neuropathy tends to improve with lowering the dose or discontinuing the drug (36; 46), with an occasional exception resulting in persistent disability (03; 20). Improvement occurs over weeks to months.

The neuropathy is toxic and related to the administration of amiodarone. Although the exact mechanism of amiodarone tissue toxicity is uncertain, a relationship to the diffuse and marked lipidosis is suspected. Like other amphiphilic drugs such as perhexiline maleate, amiodarone forms intralysosomal lipid complexes leading to the observed inclusions in multiple tissues. An immunologic mechanism has been suggested to explain observations such as early onset toxicity, possible steroid responsiveness in pulmonary toxicity, and various immunologic perturbations (56). Studies in rat brain synaptosomes have suggested that neurotoxicity might be mediated by effects on ATPase activity or calcium homeostasis (48; 27). In a study utilizing an immortalized adult rat Schwann cell line, findings suggested that amiodarone-induced lysosomal storage accompanied by enhanced oxidative stress and impaired lysosomal degradation in Schwann cells might be the cause of peripheral nerve demyelination (41).

Oral amiodarone is poorly and slowly absorbed; bioavailability ranges from 22% to 86% (29; 04; 51). As it is highly lipophilic, distribution is extensive into tissues. Peak plasma concentrations occur about 5 to 6 hours after an oral dose. Metabolism occurs slowly in the liver; less than 1% is excreted unchanged in the urine. The plasma half-life is estimated to be about 25 to 60 days but may be as long as 100 days. The only metabolite is desethylamiodarone, which accumulates during long-term treatment with a plasma concentration that may exceed that of the parent compound; its pharmacologic activity is not well known. Long-term therapeutic effectiveness for arrhythmias is associated with an amiodarone plasma concentration of 1.0 to 2.5 µg/mL. Treatment is generally initiated with an oral loading dose of approximately 10 g in the first 1 to 2 weeks, followed by the currently recommended maintenance dose of 200 mg daily (61). Amiodarone increases the plasma concentration of phenytoin. Side effects with amiodarone are poorly correlated with serum levels. Although reports vary, some clearly suggest a relationship between toxicity and the dose and duration of treatment (29; 56). Because of its long elimination half-life, recovery can be slow following discontinuation. As a potent inhibitor of the CYP3A4 isozyme of the cytochrome P450 enzyme system, concomitant use of amiodarone may potentiate the myotoxicity of statins (52; 02; 50; 35). Grapefruit juice may enhance the toxicity of amiodarone by its effect on CYP 3A4 (07).

In animal studies, rats and mice fed large doses of amiodarone for up to 90 days develop dose-related weight loss, decreased motor activity, weakness, and tremor (17). Cytoplasmic lysosomal lipid inclusions are found in tissues diffusely but are excluded from regions with intact blood-brain and blood-nerve barrier. These are present in all cell types in autonomic and dorsal root ganglia, myenteric plexus, and centrally in the area postrema, choroid plexus, ocular tissues, and pituitary. Increased blood-nerve permeability by sciatic nerve crush results in short-lived appearance of inclusions but does not affect the rate of axonal regeneration. In another study, rats treated with amiodarone intraperitoneally at 20 mg/kg per day for up to 6 weeks developed motor incoordination and increased pain thresholds, suggesting the appearance of peripheral neuropathy (47). Amiodarone injected endoneurially into rat tibial nerve at low concentrations (25 µg/mL) produces acute electrophysiologic evidence of demyelination with conduction block and pathologic evidence of segmental demyelination (54). Higher concentrations result in increasingly severe axonal degeneration, suggesting that the different pathologic changes noted in the human neuropathy may be related to variable blood-nerve barrier efficacy, leading to different drug concentrations in the nerve. Chronic amiodarone in mice also produces a myopathy with autophagic vacuolation and phospholipid inclusions; denervation induces necrosis of mainly type-2 fibers and a significant increase in amiodarone and desethylamiodarone concentrations in the muscle (16). Cytoplasmic lipid inclusions, similar to those in humans, can be reproduced experimentally in many ocular cell types of rats with local application or oral administration of amiodarone (08). Desethylamiodarone alone, as well as its parent compound, can induce lipidosis in rat alveolar macrophages, suggesting that it too is active (49).

In humans, reports of nerve conduction studies and needle EMG vary from a predominant axonopathy with reduced amplitudes and distal denervation, to prominent conduction slowing suggesting primary demyelination, to a mixed picture (37; 36; 45; 03; 21; 17; 46). Sural nerve biopsy specimens similarly show either predominant axonal degeneration affecting fibers of all sizes (37), predominant or almost pure demyelination (17), or a mixture (46). Numerous lysosomal inclusions are present in Schwann cells, axoplasm, fibroblasts, capillary endothelial and perithelial cells, and perineural cells (37; 30; 45; 17; 01; 46). In one reported case with peripheral neuropathy, concentrations of amiodarone and desethylamiodarone in a sural nerve biopsy were 80 times higher than in serum (21). Pathologic examination of retrobulbar optic nerve in a patient on amiodarone who was enucleated for melanoma demonstrated intracytoplasmic lamellar inclusions in large axons (34). Myopathic cases have shown myopathic EMG and muscle biopsy usually showing vacuolar changes, lipid inclusions, and marked accumulation of amiodarone and desethylamiodarone; occasionally there is denervation atrophy (37; 10; 15; 19; 46). A few cases have shown a necrotizing myopathy (15; 20). Neuropathologic correlates of tremor and ataxia have not been reported, but a postmortem in a patient with amiodarone-induced liver cirrhosis and parkinsonism demonstrated amiodarone accumulation in the cerebral white matter and basal ganglia (23).

The reported incidence of neurotoxicity is widely variable, with a range from 2.8% to 74% in large series (56; 42). The variability is likely related to a number of factors, including (1) varied dosages used, (2) difficulties in distinguishing amiodarone-related side effects from signs and symptoms of underlying illness in sick cardiac patients, (3) variable followup periods, and (4) different sensitivities of investigators to specific side effects. Peripheral neuropathy in many studies is correlated poorly with daily dose and total dose or treatment duration. Most reported cases are on moderate to large doses for months to years, but symptoms occur on as little as 200 mg per day with durations of 1 month, suggesting interindividual variability of amiodarone metabolism (45). The most recent study of amiodarone neurotoxicity utilizing the currently recommended 200 mg daily dose reported a cumulative incidence of 2.8%; the primary risk factor for neurotoxicity was duration of treatment (42). A large, retrospective, population-based cohort study in Taiwan showed a higher risk of optic neuropathy in patients treated with amiodarone, especially in males, and it was possibly associated with longer duration of treatment but not higher daily dose (13). In a MarketScan database study in 2018, the risk for peripheral neuropathy with the newer related antiarrhythmic dronedarone was not significantly different from other antiarrhythmics including amiodarone (60).

No specific agent is known to prevent amiodarone neurotoxicity. One study of grape seed proanthocyanidins suggested that they could protect against amiodarone-induced pulmonary toxicity in mice (06; 05). Although even low doses may eventuate in toxicity, most cases are related to larger doses over long periods, so limiting the dose and cutting back when symptoms or signs of toxicity appear is important. Although no specific information is available for amiodarone, by example from other neurotoxic agents, the presence of a preexisting neuropathy may be suspected to be a risk factor for developing a severe neuropathy.

The symptoms, signs, and electrophysiologic features are not specifically distinguishable from other toxic or nontoxic distal axonopathies. The temporal relationship to administration of amiodarone and improvement with decreasing the dose or discontinuation should clarify the issue. In general, consideration of excluding other common causes of axonal polyneuropathy is probably prudent. Confusion with chronic inflammatory demyelinating polyneuropathy may arise in some cases where demyelinating electrophysiologic abnormalities are prominent.

The neuropathy should be established by clinical examination and characterized electrophysiologically. The CSF shows normal or mildly elevated protein, without pleocytosis (45). In most cases a sural nerve biopsy will be unnecessary.

Patients should be clinically monitored regularly for the development of neuropathic signs or symptoms, and the drug dose should be adjusted or discontinued as necessary.

One study of the neurodevelopment of children exposed transplacentally to amiodarone suggested that there may be resultant learning disability (32).