Narrowing of the cerebral aqueduct of Sylvius is termed aqueductal stenosis. The aqueduct joins the third and fourth cerebral ventricles and allows passage of cerebrospinal fluid between the two chambers. When narrowed, CSF accumulates, dilating the upstream ventricles and causing ventriculomegaly. The consequences and treatment of this condition are discussed in the following paragraphs.

Stenosis of the cerebral aqueduct of Sylvius:

Hydrocephalus has been depicted in the descriptive literature of the seventeenth and eighteenth centuries and has presumably occurred throughout human history.

This article is confined to the discussion of isolated aqueductal stenosis and secondary changes. In this condition, cause and timing are often unclear. However, in some cases the cause is known, wherein malformations compress the aqueduct, resulting in primary stenosis. These include encephalocele, Dandy Walker malformation, and spina bifida (often with Chiari malformation). Although the present discussion is limited to cases of isolated aqueductal stenosis, the reader should understand that a large percentage of patients manifest additional anomalies, the discussion of which is beyond the scope of this review (22).

One study (N=12) showed the variability in progression of fetal ventriculomegaly due to aqueductal stenosis (23). One-third of cases were terminated as further progression could not be observed because of severe ventriculomegaly; others progressed rapidly in the third trimester, some evolved slowly throughout the second and third trimesters, and others remained stable. Premature delivery or cystic parenchymal change occurred in those who experienced rapid development; except for the stable cases, all required surgical intervention.

In one study of isolated aqueductal stenosis, mortality averaged 40%, with over one-half of deaths occurring in the first three postnatal months (18). In that study, 95% of patients underwent ventricular shunting, but only 10% were developmentally normal at long-term follow-up. This latter finding has been borne out more recently, in another study showing the poor prognosis of shunting in pediatric patients with hydrocephalus (12). In that study (follow-up period at least 20 years), one third of patients were deceased, one half were employed, and nearly one third had a severe mental handicap.

The following photographs depict CNS tissue from four individuals with aqueductal stenosis. In the first three, ventriculomegaly is evident in coronal sections of cerebrum; in the fourth image, an anomalous aqueduct is shown microscopically. Three postnatal patients had additional, extracranial anomalies that led to death--in two cases before shunting was instituted. For privacy concerns, additional clinical details are not provided.

The cerebral aqueduct of Sylvius develops from the central canal, situated within the embryonic neural tube, which itself is located in the mesencephalon.

When fully developed, the aqueduct courses through the brainstem (midbrain); it is bordered by periaqueductal (or central) gray matter, the tegmentum anteriorly and tectum posteriorly. In the newborn, the aqueduct is about 0.5 mm in diameter by 13 mm in length; it is narrower at each end and somewhat wider at its center (10). In the adult, this variability continues. The aqueduct averages 1 to 1.4 mm in diameter and about 14 mm in length. Dimensions for adults, obtained by MRI, differ from cadaveric measures and vary with age, with diameter increasing and length decreasing as patients get older and the cerebrum shrinks (20).

Aqueductal stenosis has been classified as malformative or acquired (24). In the former, three types are recognized: true stenosis or stenosis due to an anomalous septum (both rare) or stenosis due to forking of the lumen. When forking is identified by careful microscopy, two channels are separated by normal CNS tissue. 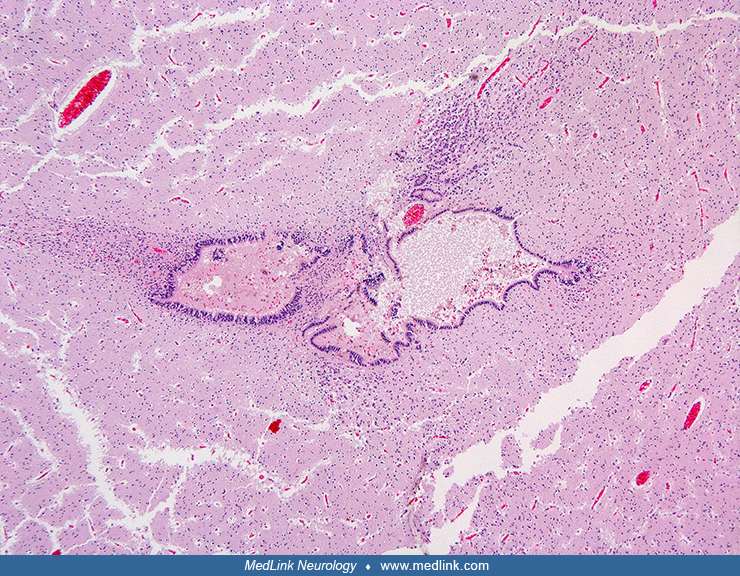 The channels may anastomose at some level, but only one communicates with the ventricular system. Gliosis may be observed adjacent to the aqueduct, and although suggestive of previous damage, its cause may not be immediately discernible. The absence of gliosis in the young patient may reflect the early age of tissue damage at a time when the fetus is unable to mount a reaction (02).

Without history or corroborating imaging, the cause of congenital stenosis is sometimes unknown, although a perturbation in embryonic development may be postulated in some cases. Because the aqueduct is so narrow, it can be obstructed by debris arising in the ventricular system (for example, sloughed cells or purulent material from an infection or blood products stemming from a hemorrhage). Chiari type II malformation may result in narrowing of the aqueduct. Approximately 5% of cases are X-linked.

Acquired stenosis may be due to compression from a mass (eg, hematoma, venous malformation, tectal glioma, pineal tumor, glioneuronal tumor of fourth ventricle) or adjacent scarring or gliosis. In this sense, a “congenital” narrowing, that is one present at birth, may have an acquired basis.

By older estimates, isolated aqueductal stenosis occurs in two in every 1000 births (22). With the increase in diagnostic abilities, this figure would be expected to change.

Isolated aqueductal stenosis must be differentiated from cases associated with other CNS or extracranial anomalies. This requires careful imaging and other workup as described in the following paragraphs.

Prenatal imaging employs ultrasound in the second trimester and, if suspect, is ideally followed by additional high-resolution ultrasound and fetal MRI in the third trimester (07; 09). The chief diagnostic criterion for ventriculomegaly is an atrial diameter greater than 10 mm measured ultrasonographically. Additional craniometric data based on a large international study have been published recently (05). Ventriculomegaly due to aqueductal stenosis may be differentiated from other malformatic or disruptive causes: brain parenchyma may be compressed, but not otherwise reduced in mass; lateral ventricles are enlarged anteriorly and posteriorly; the third ventricle is dilated, with transverse diameter greater than 2 mm; the choroid plexus is dangling; the fourth ventricle is normal; and, cranial size and configuration are normal with normal-appearing posterior fossa (09). Additional findings may implicate aqueductal stenosis as the cause of enlarging ventricles, chiefly funnel-shaped aqueduct and even direct visualization of an obstructing web or blood clot in the aqueduct (14). In addition to CNS imaging, a total anatomic survey is indicated to rule out additional anomalies. Infectious causes (eg, rubella, cytomegalovirus, toxoplasmosis) are possible and need to be explored by appropriate testing, including maternal serology. A hematologic workup is indicated in cases of fetal hemorrhage. Detailed anatomic and genetic workup is necessary to confirm or rule out syndromes or specific etiologies (for example, L1CAM mutation or X-linked hydrocephalus). Expectant management should be arranged, in an effort to offset the risk of premature birth with that of progressing hydrocephalus (09). In cases of pregnancy termination, fetal autopsy is important to further delineate findings.

Ventricular shunting has been used for decades, whereby CSF drains from a ventricle to the peritoneal cavity, or less often, the systemic venous return or right atrium. Shunts may become blocked over time and require revision. Milder forms of aqueductal obstruction, those developing from the formation of thin membranes for example, can be treated with aqueductoplasty, sometimes combined with stent placement. Surgical approaches for this procedure may be pre-coronal, suboccipital, or trans-fourth ventricle via the foramen magnum and are used in both children and adults (25; 04). Lumboperitoneal shunting has proven successful, particularly in patients with slit ventricles or ventriculoperitoneal shunt failure (21).

Prenatal ventriculo-amniotic shunting seems increasingly possible with developments in diagnosis, shunt and valve implements, and surgical technique (08). This will require a carefully controlled prospective study (09). Families of infants requiring shunting may suffer stress and benefit from intervention, especially in cases of increased morbidity and socioeconomic challenges (01).

Neuroendoscopic surgical techniques have been employed in cases of intraventricular infection to lyse and remove purulent material or other debris and irrigate the ventricular cavities with antibiotic saline; secondary hydrocephalus in such cases may require additional shunting (13). Endoscopic septum pellucidotomy may be required for unilateral hydrocephalus. The neural and vascular anatomy of the septum have been described only recently, and ideal areas for surgery identified (03). Aqueductal stenosis due to pineal cyst has been treated by endoscopy, with resolution in about 80% of cases (06).

Functional outcome is highly variable but appears to be based largely on the severity of ventriculomegaly and presence and effect of additional malformations (19; 22). Patients who are born prematurely and develop hydrocephalus secondary to CNS hemorrhage have reduced motor function and difficulties in behavioral and intellectual development, hearing, and vision (11). In one long-term (mean 5.9 years) follow-up study of 41 patients, nearly one-half had epilepsy and well over one-half were developmentally delayed; three-quarters were shunt-dependent; one-third were normal neurologically (27).

A prospective comparison of 81 patients treated with either third ventriculostomy or primary shunting revealed no difference in outcomes between the two groups (800 days median follow-up) or between those who sustained ventriculostomy failure and required later shunting (17). Stenosis may recur following aqueductoplasty alone and may require re-operation with stent placement; transient vertical diplopia or upgaze weakness have been observed in a small subset of patients (25).

The search for predictors of outcome continues, one finding being the effacement of sulci seen on imaging, which is taken as evidence for cortical maldevelopment and reduced prognosis (19).

The recurrence risk for isolated aqueductal stenosis is estimated at 4% (28). This estimate is based on older studies and could change in the future as diagnosis improves. The hereditability of X-linked hydrocephalus is different of course and is indication for genetic counseling.

Delivery of an infant with severe ventriculomegaly and expansion of the calvaria is complex and in all likelihood requires caesarian section. The value of prenatal diagnosis and preparation for the delivery cannot be overstated.

An obvious but important point is that the pharmacokinetics of infants and children differ from those of adults and must be considered in patients requiring anesthesia (15). Anesthetic approaches must take into account immature neural pathways and the possibility of developing propofol infusion syndrome but otherwise tend to vary among practitioners and institutions (26).