Several disorders of monoamine oxidase (MAO) have been described, involving isolated MAO-A deficiency, combined MAO-A and B deficiencies, MAO-B deficiency with Norrie disease, and combined MAO-A and B deficiencies with Norrie disease. In all but the kindreds with isolated MAO-A deficiency, involvement of deletions of the X chromosome in areas other than the structural genes for MAO-A gene and MAO-B impedes interpretation of the clinical data in these kindreds.

Isolated MAO-A deficiency (Brunner syndrome; OMIM 300615). In 1993, Dutch geneticist Han G Brunner and colleagues at the University Hospital Radboud Universiteit (Nijmegen, Netherlands) described a large, Dutch kindred with a new form of X-linked, nondysmorphic, mild mental retardation that occurred with marked behavioral abnormalities and sleep disorders (11). Detailed information was available from 8 of 14 affected males (this is an X-linked disorder so only males are affected). Cardiovascular difficulty was also later described (15). The most prominent and distinctive behavioral problem was overt antisocial conduct with excessive, sometimes violent aggression, often triggered by anger. Recorded incidents included stabbing, fighting, attempted rape, and other forced sexual activity. Other abnormal behavior included arson, exhibitionism, and voyeurism. Except for a unilateral clubfoot in one affected male, no other congenital abnormalities or dysmorphic features were noted. No description was provided of early childhood behavioral characteristics of affected boys. Unaffected males and obligate female carriers within the family functioned normally.

All of the well-described confirmed cases of isolated MAO-A deficiency have all derived from the same family, reported in the 2 seminal papers in 1993 by Brunner and colleagues (11; 10); consequently, this disorder has sometimes been called "Brunner syndrome" after the first author of the original reports, including in reports from Brunner's own research group (06; 77).

Isolated MAO-B deficiency. No specific defect affecting only MAO-B without involvement of the Norrie gene has been described.

Combined MAO-A and B deficiency (without Norrie disease). In 2010, 2 males were described with a 240kb deletion of Xp11.3-p11.4 that included both MAO-A and B genes but excluded the Norrie disease gene (84; 83). A similar case was reported in 2012 (58). All had developmental delay, intermittent hypotonia, and stereotypic hand movements. Two brothers presented with severe mental retardation, hand wringing, intermittent hypotonia, lip smacking, and epilepsy (84; 83), and the same phenotype was seen in the son of another family, except epilepsy was not noted (58).

Other possible cases. In 2001, another family was reported in whom MAO deficiency was suspected based on elevated serum serotonin concentrations. The affected mother presented with a history of flushes, headaches, and diarrhea. Her 2 sons had moderate intellectual impairment and attention deficit and hyperactivity disorder (19). Discussion relating to this family, pointed out that similar cases previously had been described (81). In one study, 9 individuals exhibited the same features: chronic episodic flushing, diarrhea, headache, psychiatric symptoms, irritability, prostration, increased blood serotonin, and normal or subnormal urinary 5-HIAA concentrations. MAO deficiency was suspected, and metabolic studies were performed that supported the MAO deficiency hypothesis (80; 33). Confirmation of the condition by enzyme or mutation analysis was not reported in any of these studies.

Complications of monoamine oxidase deficiency, other than those that occur as a direct manifestation of the disease, have not been described. Potentially lethal hypertensive crises may result through an increased sensitivity to dietary or pharmacological amines (10). In the case of monoamine oxidase-A deficiency, incarceration is likely due to the behavioral abnormalities associated with the disease.

Detailed information was available from eight of 14 affected males. Early case details are not available. All had mild mental retardation with IQ scores around 85. No consistent congenital abnormalities or specific dysmorphic signs were noted. Clubfoot was present in one individual. No specific dysmorphic signs were present. All had a tendency toward stereotyped hand movements (eg, hand wringing, plucking, or fiddling), and all had behavioral problems with repeated occurrences of aggression. Aggressive behavior tended to occur during periods of 1 to 3 days and was associated with reduced sleep and night terrors. Abnormal behavior included the following: attempted rape, repeated fighting, stabbing, arson, exhibitionism, voyeurism, and sexual advances to female family members (11).

Biochemistry and molecular biology of monoamine oxidases. Monoamine oxidases (EC 1.4.3.4) are a family of mitochondrial-bound flavoproteins that catalyze the oxidative deamination of a variety of biogenic amines to the corresponding aldehydes; the substrates for monoamine oxidases include monoamine neurotransmitters and neuromodulators (eg, histamine; the catecholamines—dopamine, norepinephrine, and epinephrine; and the substituted tryptamines—serotonin and melatonin), and many minor amines (eg, tryptamine and phenylethylamine) (82). 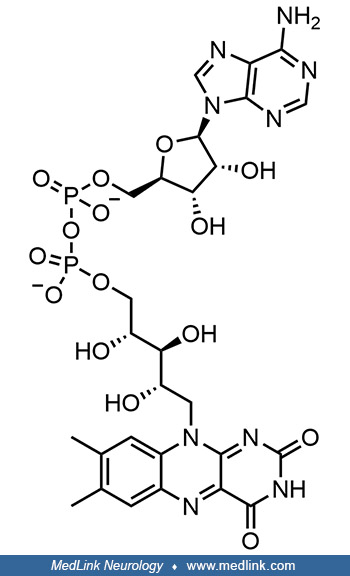 Oxidative deamination by monoamine oxidases involves 3 main steps: (1) after formation of an FAD-substrate adduct (ie, addition of 2 or more distinct molecules to form a single reaction product containing all atoms of all of the components) the FAD cofactor is reduced to FADH2 while the substrate amine is converted to an imine (ie, a functional group containing a carbon-nitrogen double bond); (2) the imine then dissociates from the enzyme and spontaneously hydrolyzes, producing an aldehyde and ammonium; and (3) FADH2 is reoxidized to FAD, with the formation of hydrogen peroxide from molecular oxygen (08).

The overall reaction is:

Monoamine oxidase is functionally coupled with either an NAD(P)+-dependent aldehyde dehydrogenase (ALDH), which oxidizes the toxic aldehyde products of the monoamine oxidase reaction to the corresponding carboxylic acids, or aldehyde reductase or alcohol dehydrogenase, which reduce the toxic products to alcohols or glycols (a 1,2-diol; ie, an alcohol with 2 hydroxyl groups on adjacent carbon atoms) (57; 08). 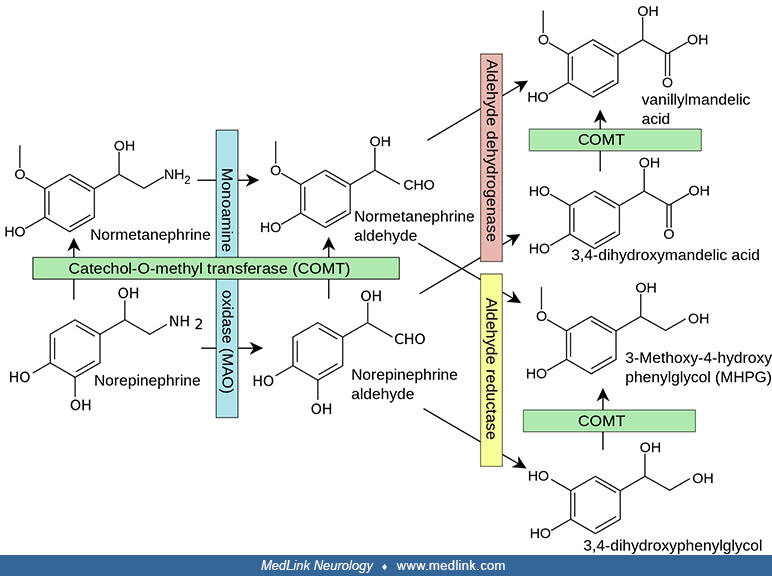 (Contributed by the U.S. National Library of Medicine, a public domain.)

The monoamine oxidase A and monoamine oxidase B genes encode for proteins of 527 and 520 amino acids, with molecular weights of 59.7 and 58.8 kDa, respectively. The 3-dimensional structures of these enzymes have been elucidated (25).

The monoamine oxidase A and monoamine oxidase B genes share approximately 70% overall homology (ie, sequence similarity) and an identical intron-exon organization, each with 15 exons and 14 introns (17). The similarity of the 2 genes resulted from a common origin: both genes derive from duplication of a common ancestor gene (35).

The coding sequence in the human monoamine oxidase A gene is highly conserved, and observed polymorphisms either affect the third codon position and do not alter the deduced amino acid sequence or should not affect the structure of the protein (73). However, there is a variable tandem repeat polymorphism that exists in the monoamine oxidase A promoter. The polymorphism consists of a repeated sequence present in 3, 3.5, 4, or 5 copies. Alleles with 3.5 or 4 copies are transcribed more efficiently than those with 3 or 5 copies of the repeat (67), and the variations have been associated with behavior traits such as impulsivity, hostility, and aggression (51; 14).

Monoamine oxidase disorders. The concentrations of monoamine oxidase A and monoamine oxidase B differ widely in humans, and some variations may predispose individuals to various neurologic and psychiatric diseases, including alcoholism (72), depression and alcoholism (78; 54), bipolar disorder (47; 48; 38; 65; 30; 63), schizophrenia (87), impulsive aggressiveness, antisocial personality (66; 24; 60; 12; 85), and attention-deficit/hyperactivity disorder (46; 64; 55).

Aggressive behavior in animals and humans has been linked to central and peripheral changes in serotonin, dopamine, and norepinephrine metabolism (86; 21; 74; 62; 52; 13). Congenital monoamine oxidase A deficiency and low-activity monoamine oxidase A variants are both associated with a higher risk for antisocial behavior and violence, particularly in males with a history of child maltreatment (40). This is a well-documented example of a gene-environment interaction, ie, a differential effect of a genotype on disease risk in persons with different environmental exposures.

Monoamine oxidase A mutations in Brunner syndrome apparently increase the activity of dopaminergic neurons through upregulation of NMDAR (ie, the N-methyl-D-aspartate receptor) (77).

Two additional families have been identified, if not fully reported; one family was reported with a pathogenic missense mutation (c.797_798GC> TT [p.Cys266Phe]) associated with deficient monoamine oxidase A activity in a family affected by autism, intellectual disability, and abnormal behavior, consistent with the findings of Brunner and colleagues from 1993 (11; 10; 61).

Norrie disease. Norrie disease is an X-linked recessive disease caused by loss-of-function mutations in the Norrie disease pseudoglioma gene on chromosome Xp11.4, which encodes the protein norrin. Males with Norrie disease have childhood blindness due to degenerative and proliferative changes of the retina, and many develop sensorineural deafness and a progressive mental disorder, often with psychotic features.

Urinary concentrations of all monoamine oxidase products are also reduced in conditions affecting the overall biosynthesis and turnover of serotonin and the catecholamines. These include the inborn errors that affect tetrahydrobiopterin metabolism and aromatic L-amino acid decarboxylase (32). Individuals with these conditions usually present in early infancy, and often with severe neurologic impairment; however, cases with only mild neurologic symptoms have been reported. A decrease in the urinary concentrations of the monoamine oxidase substrates, as well as the metabolites, distinguishes these conditions from monoamine oxidase deficiency.

Other conditions associated with altered behavior and changes in biogenic amine metabolism include pheochromocytoma, neuroblastoma, and diseases such as Parkinson disease, where a specific defect affects the nigrostriatal dopamine system. In these, as well as most other conditions affecting biogenic amine metabolism, either a combined decrease or increase of monoamine oxidase substrates and products takes place.

Positive diagnosis of monoamine oxidase-A deficiency has only been reported in detail in one kindred in which males affected by the disease presented with mild mental retardation and violent aggressive behavior (11).

Nevertheless, monoamine oxidase-A deficiency should be considered in any X-linked condition that shows linkage to proximal Xp (11) as well as in families where male members show prominent behavioral disturbance. Measurement of neurotransmitters and metabolites in urine can identify the disease and distinguish between affected males, carrier females, and normal controls (11; 01; 44). It is important that subjects not eat amine-rich foods (ie, bananas or dates) in the period prior to testing. Monoamine oxidase-A deficiency causes an increase in the urinary concentrations of the monoamine oxidase substrates, serotonin, normetanephrine, 3-methoxytyramine, and tyramine, and a reduction in the concentrations of the monoamine oxidase products, vanillylmandelic acid, homovanillic acid, 3-methoxy-4-hydroxyphenolglycol, and 5-hydroxyindoleacetic acid (11; 01). Monoamine oxidase A deficiency can be confirmed by measurement of the enzyme activity in dexamethasone-stimulated fibroblasts (10). Monoamine oxidase A activity cannot be used to detect carrier females, as their activities fall in the control range (10).

Combined monoamine oxidase-A and B deficiency (in the absence of Norrie disease) has been described in 2 families. Three affected male children showed intermittent hypotonia, stereotypic hand movements, and developmental delay. Array comparative genomic hybridization (84; 83) and-oligonucleotide-SNP chromosomal microarray (58) were used to identify 2 separate microdeletions in the region chromosome Xp11.3-p11.4 that encompassed both monoamine oxidase-A and B. Urine and cerebrospinal fluid were examined from one child. Urinary neurotransmitters and metabolites resembled those seen in the individuals with monoamine oxidase-A deficiency, and cerebrospinal fluid showed elevation of serotonin and undetectable concentrations of the serotonin metabolite, 5-hydroxyindoleacetic acid, and the dopamine metabolite, homovanillic acid.

No specific treatment for monoamine oxidase deficiency has been described.

Dietary intervention by avoiding foods rich in amines may be beneficial because monoamine oxidase A and monoamine oxidase B are essential for inactivating dietary and pharmacologic amines, including m-tyramine, p-tyramine, and phenylethylamine (44). In patients lacking normal monoamine oxidase A and monoamine oxidase B function, potentially lethal hypertensive crises may result through an increased sensitivity to dietary or pharmacological amines (10). Tyramine and phenylethylamine can cause hypertensive crises by acting as indirect sympathomimetics at sympathetic nerve terminals and in the adrenal glands (34). Complications of these amine-induced hypertensive crises can include intracerebral hemorrhage, cardiac arrhythmias, and cardiac failure (34). Affected individuals should not eat aged and fermented foods, which contain high amounts of tyramine (58). In particular, aged cheeses (eg, blue, cheddar, Swiss, Gorgonzola, Gouda, Parmesan, Romano, feta, and Brie), and aged, dried, fermented, pickled meats (eg, bacon, sausage, liverwurst, pepperoni, salami, ham, hot dogs, and corned beef) must be avoided.

Because of the behavior abnormalities, many procedures, even dental procedures, require special management. Furthermore, anesthesia presents serious risks of fatal arrhythmias in monoamine oxidase A deficiency. Successful anecdotal management with general anesthesia for dental treatment in a patient with MAO-A and MAO-B deficiency has been reported (31).