Neonatal white matter injury, formerly called periventricular leukomalacia, is the leading cause of cerebral palsy and other neurocognitive deficits in preterm-born children. White matter injury occurs primarily in preterm infants born before 32 weeks’ gestation. White matter injury is almost as common in term neonates with congenital heart disease, given delays in prenatal brain maturation secondary to in utero hypoxia (37; 52). White matter injury is seen less commonly in full-term neonates with hypoxic-ischemic encephalopathy, especially in the younger gestational age range of “full-term.” This article reviews white matter injury in infants born preterm. Advances in neuroimaging and epidemiological studies have increased our insight into the pathophysiology of this condition. Although no cure currently exists, several clinical trials are ongoing with the aim to prevent disease or to improve long-term outcomes. This article provides a comprehensive review of the clinical, pathological, and imaging aspects of neonatal white matter injury, and they discuss advances in research relevant to this condition. A case study involving a preterm infant is reviewed, including maternal history, obstetrical history, and patient’s NICU hospital course; the study demonstrates long-term outcomes that may be associated with neonatal white matter injury.

The first description of neonatal white matter injury comes from Parrot, in which he described pale infarcts seen as yellowish or chalky plaques in the lateral corners of the periventricular white matter; softening of the plaques formed cavities, which did not communicate with the ventricles (40). Fifty years later, Schwartz re-described these lesions, but it was not until the early 1960s that Banker and Larroche named this lesion “periventricular leukomalacia” and described its clinical pathological correlations with immature and mature infants, hypoxia-ischemia, and spastic cerebral palsy (07). Later, Leviton and Gilles used the term “perinatal telencephalic leuco-encephalopathy” (29). Banker and Larroche described neonatal white matter injury as periventricular cystic focal necrosis with loss of all cellular elements, surrounded by a diffuse, non-necrotic injury to the periventricular white matter, which was the predominant subtype of white matter injury seen in preterm infants at the time.

Advances in neonatal intensive care have led to a decline in mortality rates amongst infants born preterm. Despite these advances, preterm infants remain at risk for adverse neurodevelopmental outcomes (14; 42). White matter injury is a key contributor to the adverse neurodevelopmental impairments observed in this population and has been associated with motor, cognitive, and behavioral deficits (48). Infants of less than 32 weeks’ gestation are at highest risk for white matter injury.

Neonates with diffuse white matter injury are asymptomatic as neonates but are at risk for adverse motor, cognitive, and language outcomes (65; 13; 23; 54). Abnormalities in white matter microstructure and maturation in children born very preterm have also been linked to cognitive outcomes in early childhood, at school age, and in adolescence (59; 68; 39).

Macroscopic cystic white matter injury. Ultrasonography detects macroscopic cystic white matter injury well, especially when performed serially (16; 45). In particular, de Vries and colleagues performed serial ultrasounds in preterm infants once a week until discharge and term-equivalent age (16). They demonstrated that in one third of infants who developed cerebral palsy, cystic changes were first detected on ultrasound after 4 weeks of life, highlighting the importance of serial observations and performing ultrasounds at term-equivalent age in order to detect cystic white matter injury. The location and extent of cystic white matter injury are important for predicting neurodevelopmental outcomes (02). In particular, cystic white matter injury located around the central aspect of the lateral ventricles is predictive of spastic paraplegic cerebral palsy, whereas cysts located more anteriorly in the frontal lobes are not. Involvement of the optic radiations is predictive of visual impairment. Extensive cystic lesions are also associated with poorer outcomes. Finally, persistent periventricular hyperechogenicity lasting weeks may be associated with neurodevelopmental impairments, even if there is no cystic evolution, although the evidence for this is conflicting.

Diffuse white matter injury. Ultrasonography is not sensitive in detecting diffuse non-cystic white matter injury, making MRI the gold standard for identifying these lesions in preterm infants (65). In the clinical setting, punctate white matter injury, which is more readily detected on early-in-life MRI scans, may be associated with neurodevelopmental outcomes (33). Lesion size and location may predict the domain of neurodevelopmental impairments (23; 12; 34). More specifically, Guo and colleagues used quantitative assessments of white matter injury to demonstrate that anterior or frontal lesions in particular predicted adverse cognitive, language, and motor outcomes, whereas lesions in other locations were associated with motor impairments only (23). Cayam-Rand and colleagues also developed a simple neuroimaging rule to classify white matter injury by location relative to the midventricle line, with lesions anterior to this line predicting adverse cognitive outcomes in addition to motor outcomes (12). Finally, advanced neuroimaging techniques have identified alterations in white matter microstructure, maturation, and functional connectivity that predict neurodevelopmental outcomes; however, these measures have not yet been integrated into clinical practice (48).

Baby Boy M was born at 28 weeks and 4 days gestation to a 28-year-old G2P1 mother. Maternal medical history was unremarkable. The pregnancy had been uncomplicated until presentation with preterm labor. Baby Boy M was born via spontaneous vaginal delivery. Apgar scores were 3 at 1 minute, 3 at 5 minutes, and 5 at 10 minutes of life. He required resuscitation at birth with intubation and mechanical ventilation. Baby Boy M had a cord arterial pH of 6.9 and birth weight was 900 grams. There were no significant physical examination findings. Initial lab work on admission showed no indication of sepsis; however, prophylactic antibiotic therapy was initiated. Blood cultures grew Group B Streptococcus, and Baby Boy M completed a course of antibiotic therapy. Baby Boy M’s postnatal course was also complicated by bronchopulmonary dysplasia and retinopathy of prematurity, requiring treatment with laser therapy.

Baby Boy M was discharged at 3 months of age and followed as an outpatient with neurology. At 2 years of age, Baby Boy M had global developmental delay with spastic paraparesis and speech delay.

The case described above is fictitious but highlights important clinical risk factors for white matter injury and neurodevelopmental impairments in preterm infants, such as bronchopulmonary dysplasia and retinopathy of prematurity (20; 22). Postnatal infections, including those that are culture-negative, are also significant risk factors for white matter injury with worse neurodevelopmental outcomes seen in children with more frequent infections (21). It also presents the typical clinical evolution of a child with cystic white matter injury; neonates are asymptomatic and then develop spastic paraparesis.

The mechanisms contributing to white matter injury have been reviewed extensively elsewhere (Back and Miller 2014; Back 2017; 38). White matter injury is the result of a selective vulnerability of the preterm white matter and pre-oligodendrocytes to hypoxia-ischemia and other clinical factors. 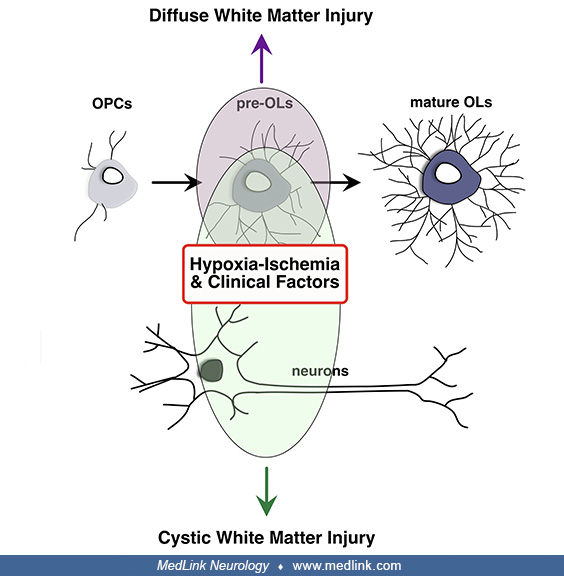 White matter injury pathophysiology
Hypoxia-ischemia and other clinical risk factors, such as infection, are key contributors to white matter injury. Mild insults selectively affect pre-oligodendrocytes (pre-OLs), which are especially vulnerable to these insults, an... 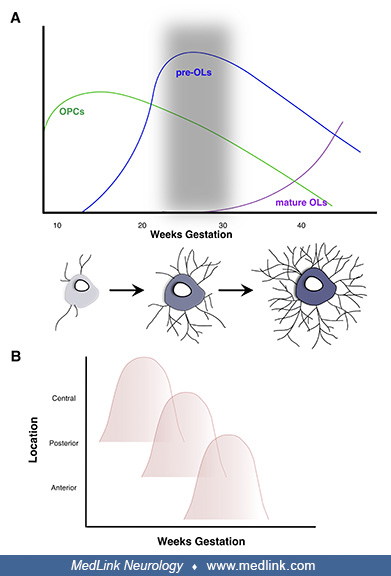 Hypoxia-ischemia, especially when recurrent, is a key contributor to white matter injury in preterm neonates, although other clinical factors, such as inflammation and infection, have also been implicated (24; Back 2017).

Hypoxia-ischemia. It was previously believed that the spatial distribution of white matter injury related to arterial border zones in the preterm infant, with fewer anastomoses present between the long and short penetrating arteries supplying the periventricular white matter in infants of less than 32 weeks’ gestation (60). Cerebral blood flow autoregulation may also be immature in infants with very low birth weight, leading to pressure-passive cerebral blood flow and larger fluctuations in perfusion that can contribute to ischemia in these arterial border zones (28). However, more recently, it has been shown that the distribution of white matter injury is correlated with the location of vulnerable pre-oligodendrocytes rather than the distribution of arterial border zones (43; Back 2017).

The World Health Organization estimates that approximately 15 million preterm infants (1 in 10 live births) are born less than 37 weeks postconceptional age each year worldwide. The rates of prematurity vary among countries with considerable resources and range from 5% to 18% (10). The rate of prematurity is markedly higher in the United States. For example, compared to many countries in Europe, the United States reached a rate of 9.6% in 2015. In the United States alone each year, infants with very low birth weight comprise about 1.5% of the 4 million live births reported. Although there is an increased survival of very low birth weight infants due to advancements in technology and medicine, many of these infants have severe neurologic disabilities. The most common form of brain injury associated with preterm survivors is cerebral white matter injury (Back 2017).

It is widely acknowledged that the most effective way of reducing neonatal white matter injury is to prevent preterm birth. However, tocolysis has not been shown to play any significant role in prevention of neonatal white matter injury (44). In the perinatal period, hypoxia-ischemia and inflammation or infection are key contributors to white matter injury in preterm infants. Several modifiable risk factors for preterm white matter injury and associated gray matter dysmaturation have been described (48). These include bronchopulmonary dysplasia, maternal chorioamnionitis, neonatal sepsis, exposure to painful procedures and analgesia, and poor postnatal growth. Preventing and treating infections, providing adequate respiratory support, and optimizing nutritional intake may reduce the risk for preterm brain injury.

Other protective practices have been identified. Antenatal administration of magnesium sulfate during preterm delivery, now administered routinely in clinical practice, reduced mortality and the risk of cerebral palsy (11). Caffeine, used to treat apnea of prematurity, was shown to improve the rate of survival without neurodevelopmental disability and reduce the risk of motor impairment (47; 46). Longer duration of prophylactic indomethacin treatment for patent ductus arteriosis may also lower risk of white matter injury as observed in a prospective cohort study (36).

Although conventional understanding of the term “periventricular leukomalacia” is that of a static acquired insult, other disease processes may injure periventricular white matter. These include malformations and genetic, metabolic, and infectious insults (03). For example, human parechovirus infections in the neonatal period can present with cystic periventricular white matter lesions seen with ultrasonography and MRI (58). Rotavirus infections present with diffuse matter injury that is diffusion restricting and involves the periventricular white matter, deep white matter, corpus callosum, internal capsules, and optic radiations (67). Genetic disorders of myelination, referred to as leukodystrophies, can masquerade as neonatal white matter injury and, therefore, may be misdiagnosed on imaging if the clinical presentation is not carefully considered. Notably, neonatal adrenoleukodystrophy, early infantile Krabbe disease, and metachromatic leukodystrophy can selectively involve the parieto-occipital white matter and can present during the neonatal phase.

Serial neuroimaging with ultrasound or MRI is essential in identifying cystic and non-cystic white matter injury (45; 33). 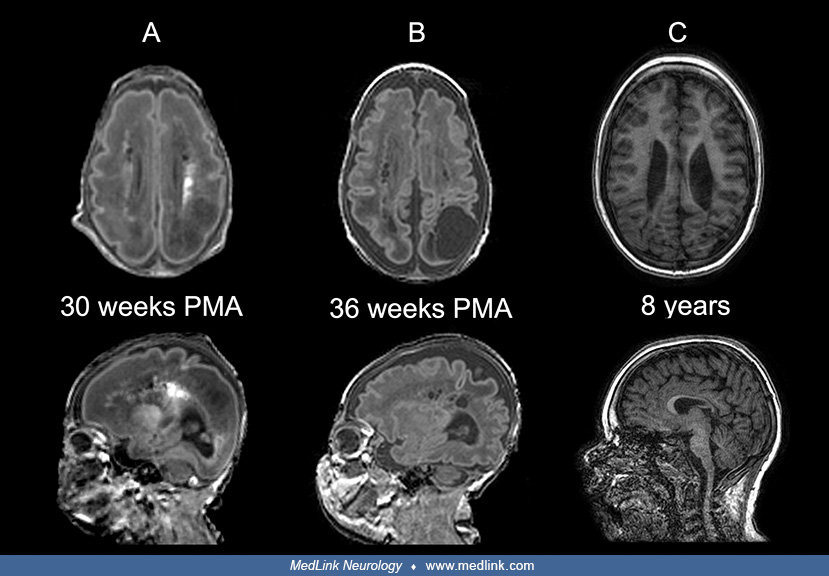 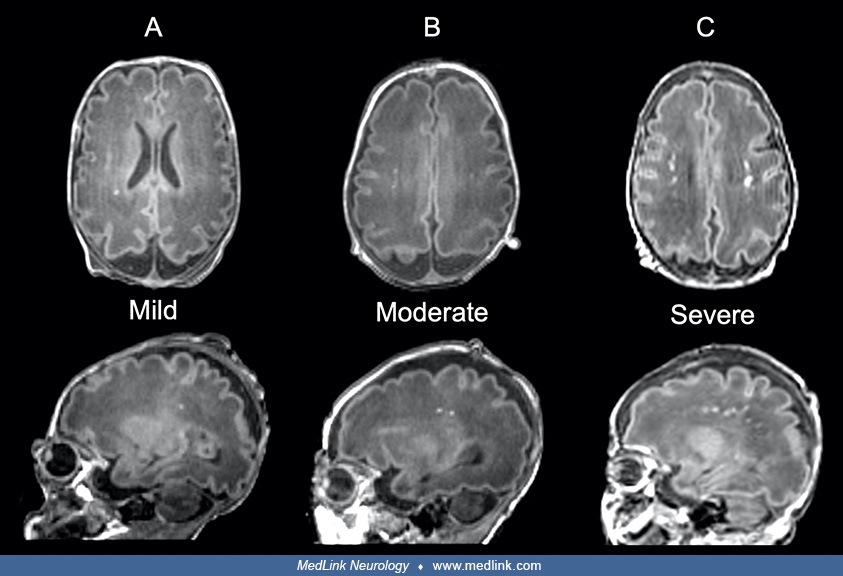 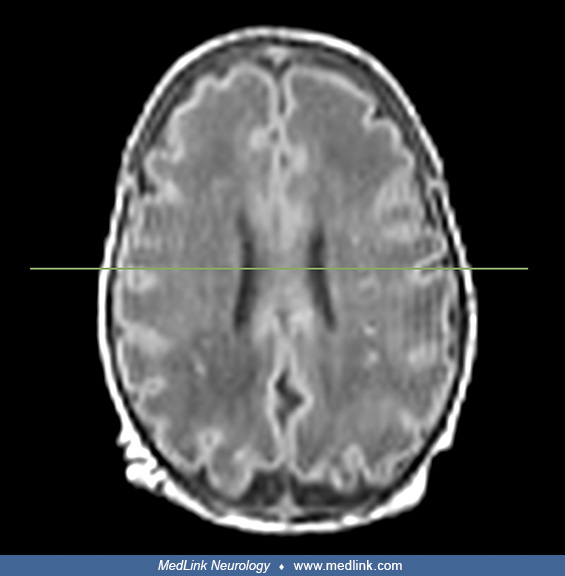 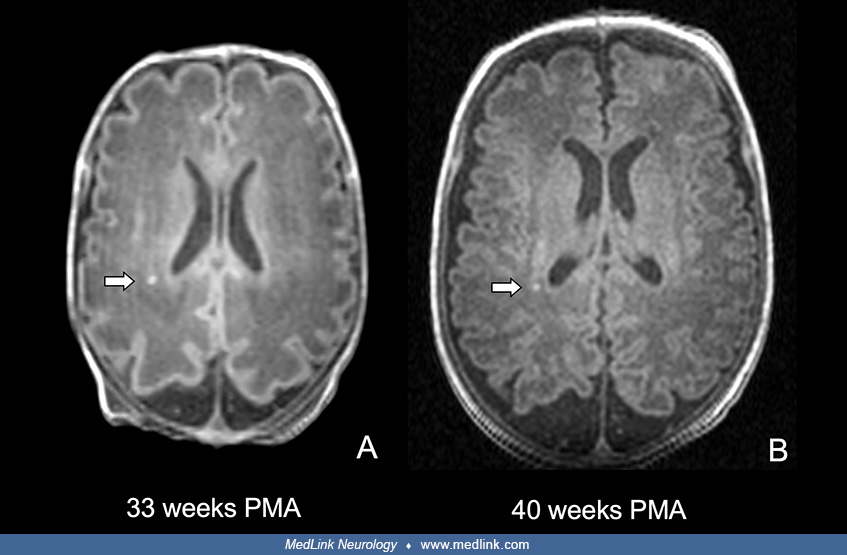 There is no specific treatment for neonatal white matter injury. Aside from the preventive approaches mentioned earlier, no restorative therapeutic approach exists. Several therapeutic agents are under investigation. Ophelders and colleagues provide a detailed review of therapeutic trials for preterm white matter injury, which include: therapeutic hypothermia, stem cell therapy, recombinant erythropoietin, and anti-inflammatory agents (38).

Recombinant erythropoietin has also been investigated as a potential neuroprotective therapy in preterm infants. Preclinical studies have shown reductions in neuronal loss and improved myelination after treatment with erythropoietin (64; 17), although this has not been consistently observed in clinical trials (50; 19; 26). The recently completed PENUT trial did not observe a significant reduction in severe neurodevelopmental impairment or death at 2 years of age in preterm infants treated with high-dose erythropoietin (26). However, in a recent commentary, Volpe highlights that a prolonged period of treatment with erythropoietin is necessary to improve neurodevelopmental outcomes as failure of pre-oligodendrocyte maturation and subsequent gray and white matter dysmaturation occurs for months after initial injury (62). Thus, further studies investigating the potential neuroprotective and restorative effects of erythropoietin are required.