Propofol, a short-acting, non-barbiturate hypnotic for intravenous use, was developed in the United Kingdom in 1970s but was withdrawn from the market due to solubility issues and anaphylactic reactions. An improved emulsion formulation of propofol was introduced under the brand name Diprivan (diisopropyl intravenous anesthetic) in 1986. A water-soluble prodrug formulation, fospropofol, is rapidly broken down in the body to form propofol and was approved by the United States Food and Drug Administration in 2008. Long-term use has been reported to result in addiction, and recreational misuse has been reported. Attention to the risks of non-medical use of propofol came to public attention in 2009 when the Los Angeles County coroner concluded that pop singer Michael Jackson died from a combination of propofol and lorazepam administered at home. However, propofol has not yet been scheduled by the United States Drug Enforcement Administration.

As an anesthetic, propofol is approved for use by anesthetists, but it is being used by nonanesthetists as a hypnotic-sedative during endoscopic procedures. A study has reviewed trends of propofol use by nonanesthetists in different countries (11). Swiss gastroenterologists use it without the assistance of an anesthesiologist in the setting of private practice.

Pharmacodynamics. Propofol is a CNS depressant. Intravenous injection of a therapeutic dose of propofol induces hypnosis, with minimal excitation, usually within a minute from the start of injection. The mechanism of action is not well understood. Propofol activates GABAA receptors directly, inhibits the NMDA receptor, blocks sodium channel, and modulates calcium influx through slow calcium ion channels. 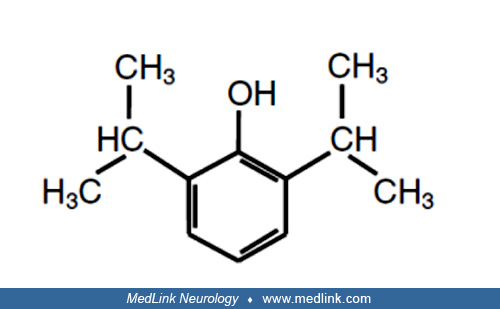 According to 1 view, general anesthetics such as propofol do not bind to ATP sites but transport kinesins and reduce their ability to transport critical cargos, which contributes to various anesthetic states (03).

Mechanism of loss of consciousness. The mechanisms underlying anesthesia-induced loss of consciousness are not clearly defined. Analysis of spectral EEG data during propofol infusion shows that mild sedation is accounted for by an increase in thalamic excitability that does not further increase during loss of consciousness, but there is a decrease in backward corticocortical connectivity from frontal to parietal cortices with no change in thalamocortical connectivity (04). High-density EEGs have been recorded in humans during gradual induction and emergence from unconsciousness with propofol to develop EEG signatures that track loss and recovery of consciousness (24). Loss of consciousness was marked simultaneously by an increase in low-frequency EEG power (< 1 Hz), the loss of spatially coherent occipital alpha oscillations (8-12 Hz), and the appearance of spatially coherent frontal alpha oscillations, which reversed with recovery of consciousness. According to a neurophysiological study, rapid induction of unconsciousness by propofol produces an abrupt change in network dynamics of the human brain, leading to a state in which neuronal activity is coupled to slow oscillations in the local field potentials (15). The local neuronal networks remain intact but become functionally isolated in time and space.

Computational models of electrophysiological oscillations in rats provide in vivo evidence that alpha oscillations (10 to 15 Hz) induced by propofol are synchronized between the thalamus and the medial prefrontal cortex, and with deepening levels of unconsciousness where movement ceases, coherent thalamocortical delta oscillations (1 to 5 Hz) develop distinct from concurrent slow oscillations (07). The pattern is like that in humans under propofol anesthesia and indicates that self-awareness and internal consciousness are impaired or abolished providing a neurophysiological biomarker of these states.

Effect on cerebral circulation and metabolism. A PET study has shown that general anesthesia with propofol is associated with a global metabolic and vascular depression in the human brain, with significant shifts in regional blood flow and metabolism indicating marked metabolic and vascular responsiveness in some cortical areas and thalamus (25). Metabolic reduction is significant in the thalamocortical network and the frontoparietal network (29). A study investigated the effects of propofol on cerebral microcirculation and oxygenation during craniotomies, and findings suggest alteration of the cerebral blood flow/cerebral metabolic rate for oxygen ratio in cortical brain regions, suggesting that propofol affects coupling of flow and metabolism in the cerebral microcirculation (13).

Neuroprotective effect. Evidence from functional brain imaging studies suggests that propofol-induced unconsciousness is associated with a global metabolic and vascular depression in the human brain. In a permanent middle cerebral artery occlusion model, propofol was shown to reduce infarct volume and neuronal damage for 7 days, suggesting long-term neuroprotective effect, which was attributed to the disodium edetate (EDTA) additive to propofol formulations for retarding bacterial and fungal growth (14). EDTA is a chelator of divalent ions, such as calcium, magnesium, and zinc, and exerts a neuroprotective effect by chelating surplus intracerebral zinc. Propofol also has an anxiolytic effect at doses that do not produce sedation.

Miscellaneous effects. Propofol reduces cerebral blood flow and intracranial pressure, is a potent antioxidant, and has antiinflammatory properties. Propofol is well known to be effective against status epilepticus that is refractory to standard anticonvulsants.

Pharmacokinetics. Following an intravenous bolus dose, there is rapid equilibration of propofol levels between plasma and highly perfused tissue of the brain, accounting for the rapid onset of anesthesia. Propofol is extensively bound to plasma proteins although the plasma level initially shows a steep decline due to both rapid distribution and high metabolic clearance. Propofol is eliminated mainly by hepatic conjugation to inactive glucuronide metabolites that account for about 50% of the administered dose and are excreted by the kidney. The terminal half-life of propofol after a 10-day infusion is 1 to 3 days. If the infusion rate in patients receiving propofol for extended periods is not reduced, it may result in excessively high blood concentrations of the drug.

Epidural blockade has a pharmacokinetics interaction with propofol possibly by reduction in hepatic and/or renal blood flow. An epidural dose of ropivacaine that blocks 20 segments reduced the target concentration of propofol by 30% compared with when no epidural blockade was used (27). This may require adjustment of dose of propofol.

Therapeutic drug monitoring. A gas chromatography-mass spectrometry method is rapid, sensitive, reliable, and suitable for qualitative and quantitative analysis of propofol in blood (30). The Pelorus 1000 (Sphere Medical) measures propofol concentrations of the whole blood in approximately 5 minutes with precision and accuracy suitable for elucidating propofol pharmacokinetics at clinically relevant concentrations without the need for sample preparation (19).

A prospectively randomized trial compared the effects of propofol versus midazolam as a sedative in severe traumatic brain injury using cerebral microdialysis to monitor cerebral biomarkers (32). The cerebral metabolic profile did not support a difference between propofol and midazolam for sedation in severe traumatic brain injury. A randomized trial comparing effects of intraoperative propofol-based total intravenous anesthesia with desflurane anesthesia on postoperative pain in lumbar spine surgery showed that patients anesthetized with propofol reported less pain during coughing and consumed less daily and total fentanyl in patient-controlled analgesia (18).

Propofol can be used for:

Propofol is contraindicated in patients with a known hypersensitivity to injectable emulsion or any of its components.

As a sedative hypnotic for a procedure, the duration of administration is determined by the length of the procedure, which is usually short for diagnostic procedures and longer for surgery.

Dosing depends on the indication for use. The rate of administration and amount of propofol depends on several factors and is decided by the anesthetist administering it for an operative procedure or other indications. Factors taken into consideration include use of other hypnotics and sedatives as well as combination with other anesthetic agents in addition to the age and general condition of the patient. There are variations in methods of use according to the nature of the procedure, for example neurosurgery or cardiac surgery. With the variable rate infusion method, patients generally require maintenance rates of 25 to 75 mcg/kg/minute (1.5 to 4.5 mg/kg/hour) during the first 10 to 15 minutes of sedation maintenance. Infusion rates can be decreased subsequently over time to 25 to 50 mcg/kg/minute and adjusted to clinical responses.

A randomized trial has shown that epidural and intravenous lidocaine reduces the dose of propofol required to induce general anesthesia (34).

Use of propofol as anesthetic should be under the supervision of a qualified anesthetist in a hospital or a facility with adequate facilities for monitoring and supportive care of patients. As a sedative for diagnostic procedures, propofol has been used by nonanesthetist physicians.

When propofol injectable emulsion is used in patients with increased intracranial pressure or impaired cerebral circulation, significant decreases in mean arterial pressure should be avoided to prevent decreases in cerebral perfusion pressure. This can be managed by slowing the rate of infusion of propofol.

Pediatric. Pharmacokinetic studies show that distribution and clearance of propofol in children is like that in adults. Advantages of propofol use include reduction of airway complications, emergence of agitation, and postoperative behavioral changes (36). Propofol is generally considered to be safe for pediatric use for diagnostic procedures where sedation is required. However, it is not recommended for induction of anesthesia in patients younger than 3 years of age or for maintenance of anesthesia in those younger than 2 months of age because its safety and effectiveness have not been established in those populations. It is not indicated for use in pediatric patients for ICU sedation or monitored anesthesia care.

Geriatric. Higher peak plasma concentrations occur with increasing patient age due to pharmacokinetic changes. Lower doses are, therefore, recommended for initiation and maintenance of sedation and anesthesia in elderly patients.

Pregnancy. Propofol has been shown to produce harmful effects on the fetus in pregnant rats. Because animal reproduction studies are not always predictive of human responses and no adequately controlled studies are available in pregnant women, this drug should be used during pregnancy only if clearly needed.

Anesthesia. Propofol is used as an anesthetic agent.

Midazolam, at sedative levels, increases blood propofol concentrations by 25%, and in the reverse interaction, propofol reduces the distribution and clearance of midazolam in a concentration-dependent manner (17).

Propofol has a good safety profile. Toxicity of overdose is an extension of its pharmacological effects. Reported adverse effects of propofol include pain on injection, bradycardia, arterial hypotension, and airway obstruction.

Propofol infusion syndrome (PRIS) is a life-threatening syndrome, which includes cardiac failure, severe metabolic acidosis, renal failure, and rhabdomyolysis. A case of PRIS has been reported in a patient after severe head injury (01). The pathophysiology is not well understood, but PRIS seems to be dose-related, and it occurs generally in patients undergoing long-term sedation at higher doses (greater than 4 mg/kg/hour) and cumulative dose of propofol is important. Another case of PRIS was reported in a child receiving intravenous propofol for control of refractory status epilepticus due to a cerebral malformation, and recovery occurred after early diagnosis of PRIS and discontinuation of propofol (21).

The findings of a safety study of propofol in children in the intensive care unit setting indicate the occurrence of adverse effects may not be directly related to dose or duration of infusion but, rather, to other factors such as genetic mutations (31).

Dreams and hallucinations under sedation or anesthesia with the use of propofol are well documented. Sexual hallucinations may be difficult to disprove and may lead to false allegations of sexual molestation (26).

Long-term use of the propofol has been reported to result in addiction manifested by disinhibition, euphoria, sedation, mood changes, habit changes, and changes in sleep habits. Withdrawal symptoms may occur after abrupt cessation of long-term use propofol manifested by unpleasant feelings, sweating, nausea, fatigue, insomnia, irritability, stomach cramps, panic attacks, vomiting, tremors, and seizures. One study suggests that the incidence of propofol abuse in health care personnel is increasing, particularly among women and anesthesia personnel (06).

Management. Pain associated with propofol injection in children can be reduced by pretreatment with a small dose (0.3 mg/kg) of ketamine (37). If PRIS is suspected, propofol should be discontinued and replaced with an alternative sedative agent. General measures to support cardiac and renal function should be initiated promptly in patients with suspected PRIS. A review of 168 reported cases recommended early consideration of continuous hemofiltration in the management of PRIS (10).