The author explains the clinical presentation, pathophysiology, prevention, diagnostic workup, and management of superficial siderosis of the central nervous system. Superficial siderosis is a potentially devastating syndrome usually caused by recurrent subarachnoid hemorrhage with accumulation of hemosiderin and other iron-containing pigments in the leptomeninges, brain surface, brainstem, cerebellum, cranial nerves, and spinal cord. Superficial siderosis can mimic many other central nervous system degenerative or multifocal disorders, including amyotrophic lateral sclerosis and multiple sclerosis.

A significant number of cases may be asymptomatic, possibly reflecting a milder form of disease or a presymptomatic state (37; 62; 42; 109; 31).

The prognosis is often poor. The condition may be progressively disabling or fatal. Even with successful surgical resection of the causative lesion (when that is identified), significant functional recovery cannot be anticipated. However, generally progression is lessened or averted, at least in the short periods of follow-up reported (95).

In patients with acute intracerebral hemorrhage, cortical superficial siderosis severity is an independent predictor of diffusion-weighted imaging lesions (85). In a memory clinic population, cortical superficial siderosis was related to cerebrovascular disease and may be a manifestation of severe cerebral amyloid angiopathy, even in patients without intracerebral hemorrhage (94).

A 62-year-old man presented with difficulty walking, diffuse weakness, falls, and syncope (98). He had a 1-week history of rapidly progressive hand weakness and weakness of the limbs. There was no history of recent or remote trauma, but he had a history of subarachnoid hemorrhage 6 months prior to evaluation that had been managed conservatively. MRI of the brain showed mild effacement of the sulcal spaces on T1- and T2-weighted images, and there was a positive phase shift and blooming along the sulcal spaces on phase-contrast and maximum-intensity projection susceptibility-weighted images suggestive of superficial siderosis, but evident source of bleeding. 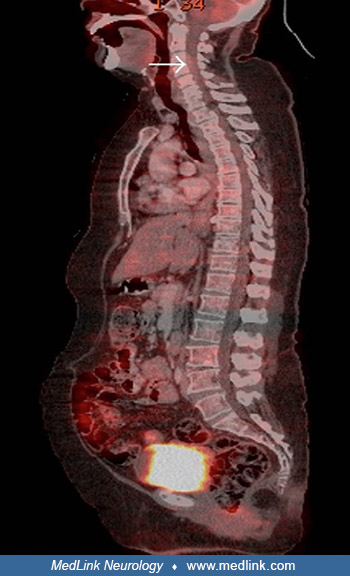 The patient underwent C3–C5 laminectomy with excision of a firm, smooth-surfaced, and blackish-colored intradural extramedullary mass lesion. Histopathological examination showed a diffusely pigmented tumor with a peritheliomatous arrangement of cells (ie, tumor cells around blood vessels with necrosis of tumor cells further away from vessels), which obscured the cytological details. 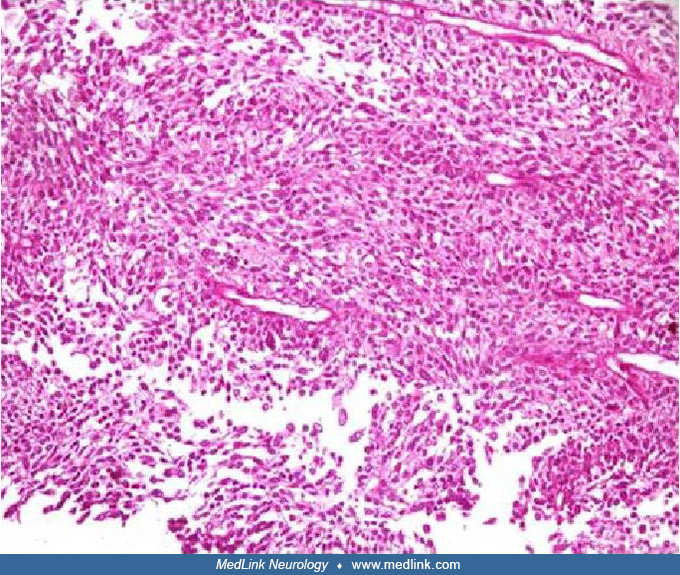 After bleaching, the tumor cells had pleomorphic, round-to-oval nuclei with inconspicuous nucleoli and a moderate amount of cytoplasm. 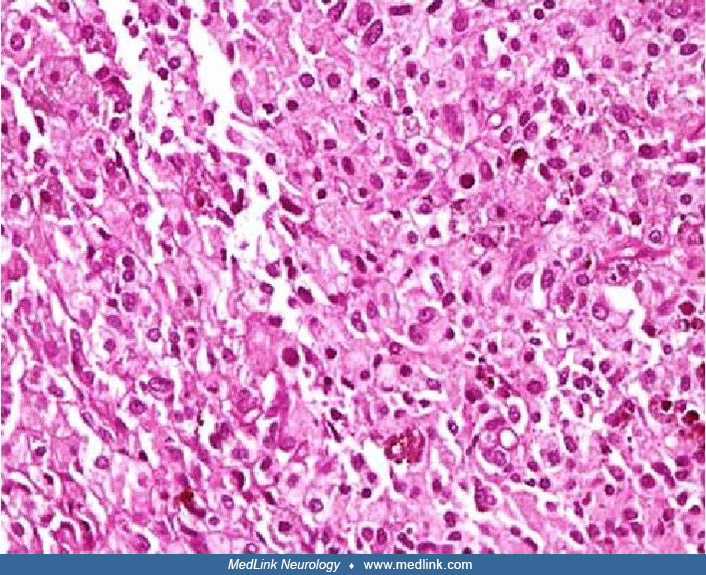 On higher magnification, the tumor cells had mild nuclear pleomorphism and moderate-to-abundant cytoplasm, with occasional cells containing a blackish-brown pigment. No significant increase in mitosis was evident. 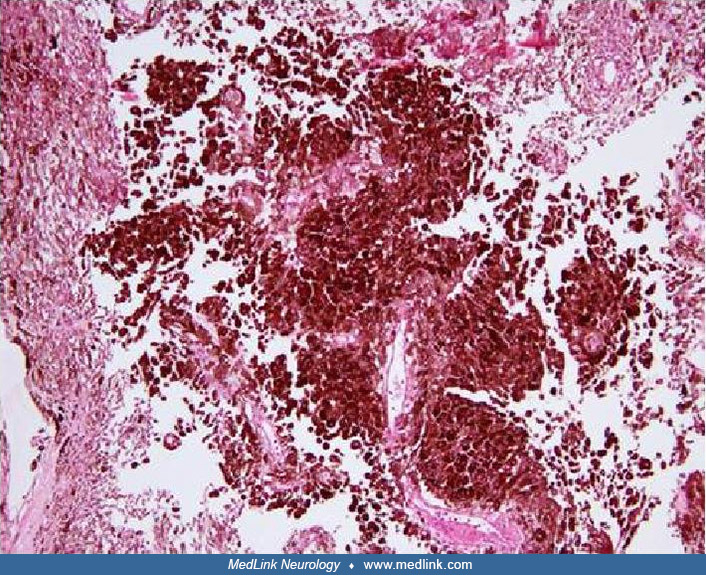 On immunostaining with Ki-67 (the Ki-67 protein, also known as MKI67, which is a cellular marker for proliferation), the tumor had a low proliferation index (< 1%), which is characteristic of melanocytomas. Subsequent careful examination of the skin and the fundus of the eye did not reveal any melanotic lesions. Therefore, the tumor was considered a primary melanocytoma of the cervical spine. The patient improved symptomatically in the postoperative period.

Superficial siderosis is caused by recurrent subarachnoid hemorrhage with dissemination of heme by circulating cerebrospinal fluid and subsequent accumulation of hemosiderin and other iron-containing pigments in the leptomeninges, brain surface, brainstem, cerebellum, cranial nerves, and spinal cord (48). Hemosiderin may be intracellular or extracellular. Large mononuclear phagocytes containing granules of hemosiderin (ie, siderophages) can be demonstrated pathologically. Histologic sections demonstrate severe damage to the eighth cranial nerve and cerebellum (47; 80; 48), presumably as a result of preferential deposition from glial catabolism of ferritin within these structures (28). In the cerebellum, Bergmann glia and abundant microglia synthesize heme-oxygenase-1 and ferritin in response to heme (48). Hearing loss can be caused by degeneration of spiral ganglion cells (75). Localized deposition of hemosiderin in the cortex may produce specific cognitive impairments and hallucinations, depending on the location and severity of deposition (108).

Bleeding from the epidural venous plexus may cause superficial siderosis associated with ventral dural defects (105).

There are often long delays between symptom onset and definitive diagnosis of superficial siderosis (35). Superficial siderosis can mimic many other central nervous system degenerative or multifocal disorders. For example, cases have been reported that have been confused with amyotrophic lateral sclerosis (with slowly progressive weakness, fasciculations, and hyperreflexia) (29) and multiple sclerosis (with oligoclonal bands in some cases) (79).

There are often long delays between symptom onset and definitive diagnosis of superficial siderosis (35). Superficial siderosis can mimic many other central nervous system degenerative or multifocal disorders. For example, cases have been reported that have been confused with amyotrophic lateral sclerosis (with slowly progressive weakness, fasciculations, and hyperreflexia) (29) and multiple sclerosis (with oligoclonal bands in some cases) (79).

According to Lee and colleagues, superficial siderosis should also be considered in cases of rapidly progressive hearing loss occurring over weeks (57); the following table was modified by Dr. Douglas Lanska using information from Lee’s study.

Despite thorough evaluation (eg, with MRI, CT, angiography, and myelography), no cause is identified in a significant fraction of cases (50; 21).

A thorough evaluation is needed when superficial siderosis is suspected to localize the source of bleeding. MRI is the most important diagnostic study, in conjunction with lumbar puncture and selective use of angiography. Although used in the past (120), there is little role for brain biopsy any longer to diagnose this condition. Nevertheless, even with thorough diagnostic evaluation, the source of bleeding remains unidentified in many cases (72; 50).

MRI studies demonstrate hemosiderin deposition along the superficial surfaces of the brain, brainstem, cerebellum, and spinal cord (50; 30). Hypointense rims around the brain, brainstem, cerebellum, cranial nerves, or spinal cord are commonly seen on T2-weighted images, and hyperintense rims may be demonstrated on T1-weighted images (99; 83; 111; 55; 33; 65; 50). A temporal bone MRI protocol including 3D-constructive interference in steady state (3D-CISS) and susceptibility-weighted imaging (SWI) may be helpful in patients with sensorineural deafness or vestibular deficits and ataxia due to superficial siderosis (115). In cerebral amyloid angiopathy, cortical superficial siderosis on MRI corresponds to accumulated iron-positive deposits in the superficial cortical layers, representing the chronic manifestation of prior bleeding episodes from leptomeningeal vessels (18).

CT may show widespread meningeal enhancement or cerebellar atrophy (81; 99). Although CT may suggest the diagnosis of superficial siderosis, MRI is more sensitive and specific (99; 50).

Cerebellar superficial siderosis is also common in cerebral amyloid angiopathy and is present in approximately 10% of cases (46).

When superficial siderosis is diagnosed on brain imaging and no source is identified, spinal imaging is essential (60; 35). Dural diverticula, pseudomeningoceles, and other dural defects (including transdural leaks) are usually best shown on myelography or CT myelography (50; 121). The location of a dural defect associated with longitudinally extensive intraspinal collections may be best localized by dynamic CT myelography (50).

Lumbar puncture may demonstrate recurrent or persistent xanthochromia, red cells, a slightly elevated white cell count, increased protein, increased iron and ferritin levels in the cerebrospinal fluid, and siderophages (99; 120; 67; 50; 50). Again, because of the intermittent bleeding in small amounts, CSF may be normal (50).

Management is directed at resection of the source of bleeding (99; 61; 50; 49; 95; 35; 56). Symptomatic treatment is directed as well at various features of the condition, including headache, seizures, etc.

Despite the retrocochlear nature of the disorder, bilateral profound hearing loss from superficial siderosis is not an absolute contraindication for cochlear implants (27; 38; 45; 125; 101; 128; 75; 102; 100; 110; 88; 77). The reported success of cochlear implantation in such cases is variable (101; 128; 110), with some anecdotal reports of benefit (38; 45; 100) and others of lack of benefit or only marginal benefit (125; 88). Furthermore, apparent initial benefit from cochlear implants in patients with superficial siderosis may not be long-standing, particularly in those with progressive underlying disease (128; 110). Long-term outcomes depend on the site of lesion, the degree of cochlear nerve function, and the ongoing neural deterioration (110).

Pharmacotherapy with iron-chelation therapy is not of demonstrated effectiveness (99), nor is shunting of cerebrospinal fluid (70) or corticosteroid therapy (92). Improvement in hearing and mobility has been anecdotally reported following treatment with deferiprone, a new iron chelation therapy that can penetrate the blood-brain barrier (24; 23), but this therapy has also been associated with agranulocytosis (39), therefore, controlled studies will be necessary to establish the efficacy and overall utility of this therapy.