Fungi of the phylum Ascomycota, commonly known as the sac fungi, are defined by an "ascus" (meaning "sac" or "wineskin"), a microscopic sexual structure in which nonmotile spores, called ascospores, are formed. However, some species of the Ascomycota are asexual. Familiar edible or conditionally edible examples of sac fungi include morels and truffles, whereas others with much greater potential toxicity include false morels and Claviceps purpura (ergot).

The morel neurologic toxidrome corresponds to Group 2D of White's classification of mushroom poisoning but is not covered by either Barbato or Blackman or the American Association of Poison Control Centers’ National Poison Data System (01; 02; 16; 07).

Morel (Morchella spp.) mushrooms toxicology. Clinically ill patients with morel neurologic syndrome more frequently ingested a large quantity of morels, suggesting a dose-dependent toxicity. The responsible toxin is unlikely to be thermolabile because more than half of the documented cases occurred after eating “well-cooked” morels. It is unknown whether the toxin is present in all morel species or only in some species, or whether the toxin is present in fresh mushrooms or only in older specimens.

Morel neurologic syndrome. In a retrospective study of morel poisonings collected in French Poison Control Centers from 1976 to 2006, 275 patients were identified with a toxidrome after ingesting morel mushrooms (14); 146 patients presented with a gastrointestinal toxidrome, and 129 presented with a neurologic toxidrome after morel consumption. The median time to onset of symptoms in those with a gastrointestinal syndrome was 5 hours after morel consumption, with a range of 30 minutes to 36 hours, whereas the median time to onset in those with a neurologic syndrome was 12 hours, with a range of 6 minutes to 48 hours. The neurologic toxidrome was not limited to a cerebellar syndrome as some prior reports had suggested. Instead, the main neurologic signs of cases with a neurologic syndrome were tremor (53%), dizziness or "inebriation" (53%), visual disorders (22%), and unsteadiness or ataxia (21%). Other less common neurologic manifestations included headache (13%), paresthesia (7%), trismus or muscle spasms (6%), drowsiness or confusion (6%), and dysarthria (5%). Uncommon manifestations, occurring in 2% or fewer cases, include nystagmus or abnormal eye movements, myosis, mydriasis, dysphagia, hallucinations, agitation, or seizures as well as extrapyramidal and pyramidal disorders.

The false morel neurologic toxidrome (gyromitrin/monomethylhydrazine) is not covered in the classifications of mushroom poisoning by Barbato but corresponds to Group 2 of Blackman, Group 4A of White, and Group 3 of the American Association of Poison Control Centers’ National Poison Data System (01; 02; 16; 07).

False morel mushrooms. Systemic and neurologic toxicity is caused by a toxin present in Gyromitra species, including the false morel mushroom (Gyromitra esculenta), as well as G. gigas (Kromb.), Cooke (non Phill.), and Cudonia circinans. The toxin may also be present in Paxina and Cyathipodia micropus species, though these are far less common. 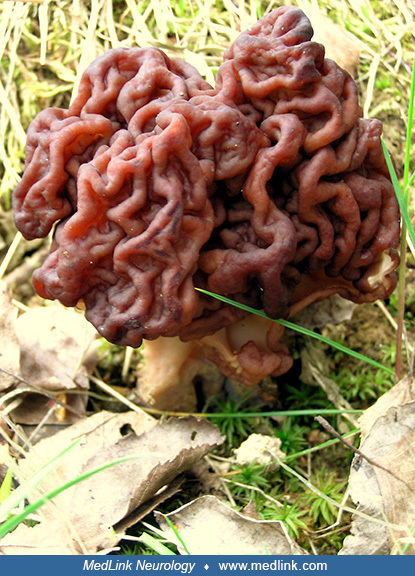 The false morel mushroom (Gyromitra spp.) occurs in coniferous woodlands of the Northern latitudes, where it may be confused with various true morel mushroom species (Morchella spp.), which are generally edible or conditionally edible (04).

False morel mushroom toxicology. Gyromitrin is a potent and potentially fatal toxin found in Gyromitra species. Gyromitrin is water-soluble and volatile, so it can be partly removed by parboiling or drying, but these techniques are insufficient to ensure removal of sufficient toxin to prevent potentially dangerous poisoning (03).

Monomethylhydrazine can bind to and inhibit pyridoxal phosphokinase. Pyridoxine kinase inhibition interferes with production of the active form of pyridoxine, pyridoxal 5-phosphate . 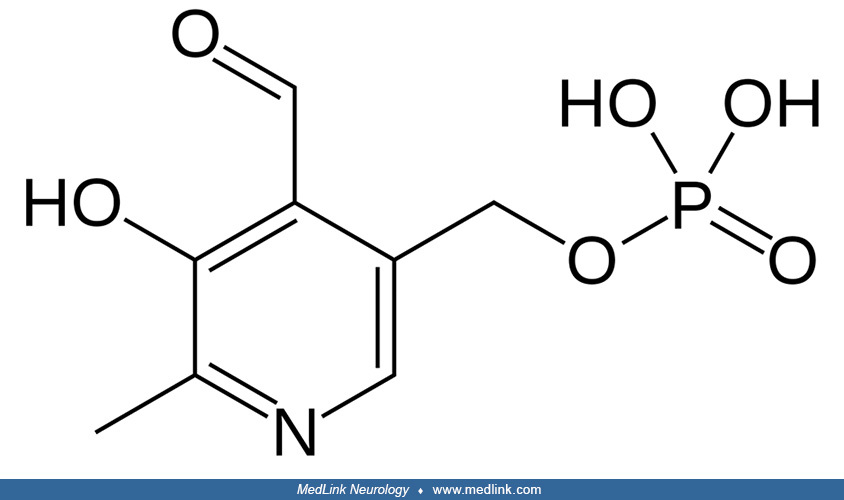 Skeletal formula of pyridoxal 5-phosphate, the active form of pyridoxine (vitamin B6)

Pyridoxal-5'-phosphate is an essential cofactor for various enzymes, including glutamic acid decarboxylase, which catalyzes the decarboxylation of glutamate to gamma-amino butyric acid and carbon dioxide (15). 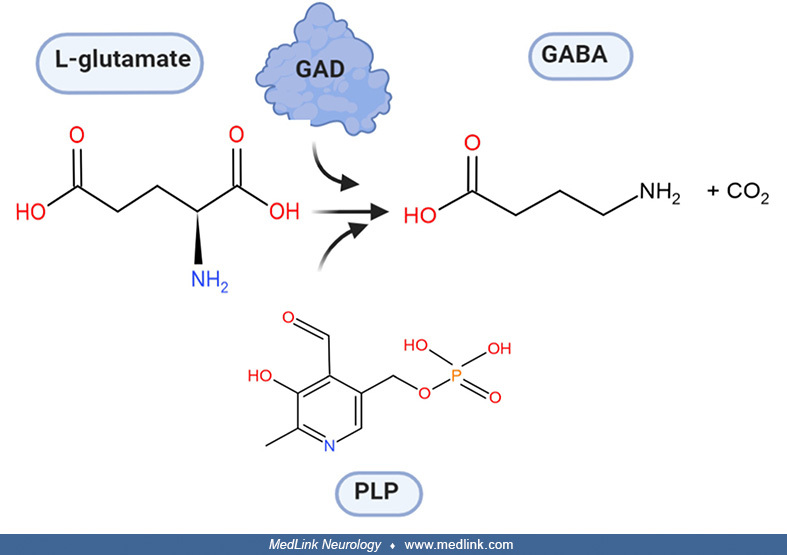 Decarboxylation of l-glutamate to GABA catalyzed by glutamate decarboxylase

Pyridoxal 5'-phosphate is an essential cofactor for glutamic acid decarboxylase, which catalyzes the decarboxylation of glutamate to gamma-amino butyric acid and carbon dioxide. Because glutamate is an excitatory neurotransmitt...

Monomethylhydrazine also may inhibit GAD directly. The resultant GABA deficiency, with loss of inhibitory neurotransmission, as well as the relative build-up of glutamate, with an increase in excitatory neurotransmission, may produce CNS excitation and seizures that are refractory to standard anticonvulsant therapy. The seizures and some of the other neurologic manifestations may be ameliorated by administering pyridoxine (18; 06; 11). The toxic metabolites also cause glutathione depletion in red blood cells and can form free oxygen radicals that bind to hepatic macromolecules, collectively causing hemolysis, methemoglobinemia, and hepatorenal failure.

The neurologic toxicity of monomethylhydrazine resembles that of isoniazid (or isonicotinic acid hydrazide), and this is not coincidental. Both compounds are hydrazines (ie, with an N-N single bond), and both interfere with pyridoxine metabolism, which can result in GABA depletion and refractory seizures.

Between 1990 and 2018, an outbreak or "hot spot" of 14 cases of amyotrophic lateral sclerosis (ALS) was identified in permanent and part-year residents with second homes in a mountainous hamlet in the French Alps (09). Genetic risk factors and known environmental risk factors for ALS were excluded. All the patients had ingested wild mushrooms, notably poisonous false morels, and half of them specifically reported acute illness following Gyromitra gigas mushroom consumption. This finding suggests that genotoxins of fungal origin may induce motor neuron degeneration.

Gyromitrin/monomethylhydrazine toxidrome. Gyromitra syndrome consists of a gastrointestinal prodrome occurring more than 5 hours after eating Gyromitra esculenta mushrooms, followed by other systemic and neurologic toxicity (03; 05; 12; 10; 08). Acute liver injury and, less commonly, acute kidney injury can occur over the next 2 days. Confusion characterizes acute central nervous system toxicity, but in the most severe instances, seizures refractory to standard anticonvulsants may develop.

Gastrointestinal symptoms (nausea, vomiting, and diarrhea) are delayed and typically appear 5 to 10 hours or longer after ingestion of toxin-containing mushrooms (or 2 to 8 hours after inhalation of the toxin, eg, with parboiling). Other systemic manifestations may include dry skin with poor turgor (from vomiting and fluid losses), fever, headache, diaphoresis, hypotension, tachycardia, tachypnea (secondary to methemoglobinemia or hemolysis), cyanosis unresponsive to oxygen (from methemoglobinemia), jaundice (from liver damage and hemolysis), muddy-colored urine (from hemoglobinuria due to hemolysis), chocolate-colored or brownish blood (from methemoglobinemia), and hypoglycemia.

Management. Management is primarily symptomatic and supportive. A glucose infusion is recommended to prevent hypoglycemia. Pyridoxine, 25 mg/kg as an infusion over 30 minutes, should be given after substantial ingestion or if central nervous system toxicity is present (18; 17); repeat doses may be needed. Diazepam should be administered intravenously if seizures persist despite pyridoxine. There is no evidence that acute liver toxicity and other non-neurologic toxicity are ameliorated by pyridoxine (11). Most patients recover after 2 to 5 days of a gastrointestinal illness.

Adverse outcomes. Death from gyromitrin-containing mushrooms is rare in North America, but five people died from ingesting these mushrooms in Minnesota in 1938 (03), and case-fatality rates of 10% to 40% have been reported in other regions of the world. Some of the spatial variation in outcomes results from regional variations in the toxicity of gyromitrin-containing mushrooms.