Cerebral folate deficiency is characterized by decreased cerebral concentrations of 5-methyltetrahydrofolate in the presence of normal blood folate concentrations within the reference range. Patients may have developmental delay or regression, hypotonia, seizures, visual disturbances, and autistic features. Therapy with oral folinic acid is effective for treating many aspects of the disorder. The disorder is caused by decreased transport of folate across the blood-brain barrier due to decreased function of folate receptor alpha. In some individuals, the disorder may be caused by autoantibodies directed against folate receptor alpha; in others, mutations in the FOLR1 gene, which encodes folate receptor alpha, have been identified.

The term “cerebral folate deficiency” is also sometimes used to describe conditions where CSF MTHF is low, in the presence of low or undefined peripheral folate levels (30), although this muddies the concepts and is confusing.

Secondary causes of cerebral folate deficiency include a diverse collection of disorders, for many of which the precise metabolic disruption remains obscure:

Secondary cerebral folate deficiency in adults, when defined simply as low MTHF concentrations in the CSF (in the presence of undefined peripheral folate levels), is a heterogeneous but potentially treatable condition (22). Cerebral folate deficiency in adults should be considered in patients with mitochondrial diseases, primary brain calcifications, and unexplained complex neurologic disorders, especially if associated with white matter abnormalities (22).

This article will address the primary causes of cerebral folate deficiency and the disorder resulting from antibodies to the folate receptor. Collectively, these conditions include metabolic recycling defects and disorders of folate transport that typically present with extremely low cerebrospinal fluid concentrations of 5-MTHF below 10 nmol/L prior to treatment.

Folate transport disorders. Cerebral folate deficiency can be produced by a specific transport defect resulting in decreased transport of folate across the blood-brain barrier at the choroid plexus. This may be caused either by folate receptor alpha deficiency resulting from mutations of the FOLR1 encoding gene with an autosomal-recessive pattern of transmission, or by production of blocking/binding autoantibodies.

Age of clinical onset of folate receptor alpha deficiency varies, but in most cases the disorder presents as an encephalopathy during the first year of life after an initial period of normal motor development (46). Early signs of the disorder may include agitation and sleep disturbances. Affected individuals show deceleration of head growth and psychomotor delay or regression that can develop into severe retardation in the absence of treatment. Hypotonia, dyskinesia, spasticity, and ataxia may be present (29; 14). There may also be visual disturbances leading to visual loss and optic atrophy in the absence of treatment, and some children exhibit progressive hearing loss starting at about 6 years of age. Seizures (ie, myoclonic, tonic, astatic, generalized tonic-clonic) are typical, with myoclonic seizures being the most frequent seizure type; these may be intractable (33; 17; 26; 05; 25; 46; 13; 16; 39; 47; 14; 20; 23; 21). Infantile spasms and status epilepticus have also been reported (45). Several children have had autistic features (26; 25; 15; 31). On neuroimaging, untreated children have shown moderate frontotemporal atrophy with signs of periventricular and subcortical demyelination or hypomyelination, and slowly progressive supra- and infratentorial atrophy (33; 20). A peripheral neuropathy with axonal degeneration and demyelinating features has also been reported (20).

Patients with cerebral folate deficiency associated with blocking autoantibodies against folate receptor alpha may present at a later age with autism or schizophrenia that is unresponsive to conventional treatment (37; 34; 41; 40; 18; 12; 31) or with myoclonus and memory impairment (44). A 13-year-old previously healthy boy presented with a 17-month history of schizophrenic symptoms with progressively worsening catatonia, near-complete mutism, frequent enuresis and encopresis, and severe psychomotor retardation (18). A 58-year-old woman with folate receptor alpha autoimmunity presented with mild myoclonus and short-term memory impairment (44).

Patients with genetic forms of cerebral folate deficiency may present with other genetic disorders in nearby areas on chromosome 11. For example, a boy presented with congenital deafness, hypotonia, and ataxia in early childhood (13). At age 6 he developed intractable epilepsy. He deteriorated clinically and at age 8 he developed respiratory arrest and severe hypercapnia. He had homozygous nonsense mutations in the FOLR1 gene and FGF3 gene, both of which map to 11q13. The latter mutation caused congenital deafness with labyrinthine aplasia, microtia, and microdontia (LAMM syndrome).

Prognosis and complications vary across the disorders of folate transport and metabolism. See presentation and course.

Folate, an essential micronutrient, is a critical cofactor in one-carbon metabolism. Humans and other mammals cannot synthesize folate and depend on dietary sources to maintain normal levels (03).

Folate transport disorders. Cerebral folate deficiency can result from decreased function of folate receptor alpha, which, together with the proton-coupled folate receptor, is required for transport of folate (mainly as MTHF) across the blood-brain barrier at the choroid plexus (50; 02; 49; 30).

The fundamental characteristic of these disorders is a specific inability to transport folate from the blood to the central nervous system, resulting in decreased CSF MTHF concentrations in the presence of normal blood folate concentrations. This contrasts with hereditary folate malabsorption or dietary folate deficiency where both blood and CSF folate concentrations are decreased (49). Antibodies against folate receptor alpha may play a role in cerebral folate deficiency in individuals with Rett syndrome and a form of Aicardi-Goutieres syndrome (39).

Mutations in the FOLR1 gene on chromosome 11q13.4 have been identified in more than 20 families (30).

Disorders of folate metabolism. The interrelationships of the enzymes involved in basic folate one-carbon metabolism are shown in figure 1. 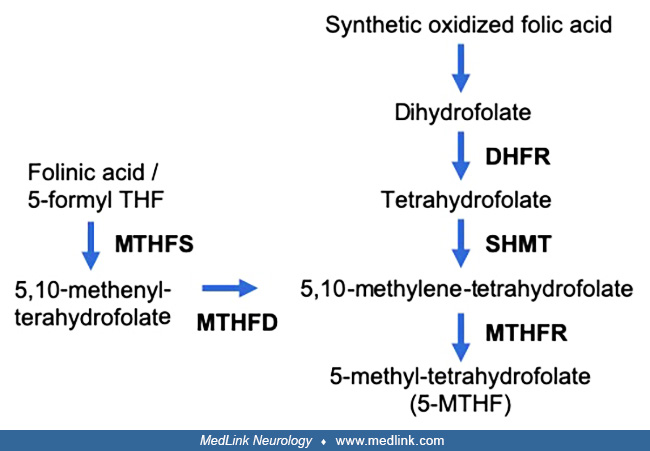 Methylenetetrahydrofolate reductase deficiency is an autosomal recessive disorder caused by mutations in the MTHFR gene on chromosome 1. The cytogenetic location of the MTHFR gene is 1p36.22.

MTHFR catalyzes the conversion of 5,10-methylenetetrahydrofolate to 5-methyltetrahydrofolate, the essential methyl group donor for remethylation of homocysteine to methionine (so consequently key biochemical changes associated with this disorder include elevated plasma total homocysteine and low methionine levels) (48).

Dihydrofolate reductase deficiency is an autosomal recessive disorder caused by homozygous mutation in the DHFR gene on chromosome 5q. The cytogenetic location of the DHFR gene is 5q14.1.

Methenyltetrahydrofolate synthetase deficiency is an autosomal recessive disorder caused by mutations in the MTHFS gene on chromosome 15. The cytogenetic location of the DHFR gene is 15q25.1.

Prevention is not possible; early diagnosis before development of severe neurologic problems appears to be vital.

Decreased concentrations of folate in the CSF also may be seen in a number of other neurologic disorders, including with Rett syndrome, Aicardi-Goutières syndrome, 3-phosphoglcerate dehydrogenase deficiency, dihydropteridine reductase deficiency, aromatic amino acid decarboxylase deficiency, Kearns-Sayre syndrome, and mitochondrial complex I encephalomyopathy, as well as with chronic exposure to antifolate drugs or anticonvulsant medications (33; 32).

Early diagnosis is crucial because high-dose folinic acid is an effective treatment that can ameliorate or even prevent further neurodegeneration (14).

The following diagnostic procedures are required to establish the diagnosis of cerebral folate deficiency and rule out alternatives:

5-formyltetrahydrofolate is generally administered as calcium or sodium salt (eg, calcium folinate, sodium folinate, leucovorin calcium, leucovorin sodium). Treatment has been initiated with 0.5 to 1.0 mg/kg per day and in some cases has been increased to as high as 5 mg/kg per day. Treatment results in the normalization of folate concentrations in CSF and improvement of neurologic findings, even in patients with severe cerebral folate deficiency (35; 17; 29; 01; 41; 24; 19; 20; 22). Treatment with 5-formyltetrahydrofolate (folinic acid; leucovorin) can result in clinical improvement, but intravenous administration high-dose 5-formyltetrahydrofolate (folinic acid; leucovorin) may be necessary to control seizures and stop neurologic regression (11).

Treatment with folic acid is ineffective and may instead result in a worsening of seizures (38; 16; 45; 23).

A milk-free diet may be helpful for cerebral folate deficiency due to FOLR1 blocking or binding autoantibodies because this may help downregulate the production of FOLR1 autoantibodies (38).

The small number of reported cases of dihydrofolate reductase deficiency improved with oral folinic acid supplementation, as demonstrated by improvement of CSF 5-MTHF levels, and improved seizure control and other neurologic symptoms (04; 09; 30).

Individuals with cerebral folate deficiency due to folate transport disorders have usually responded to therapy with oral 5-formyltetrahydrofolate (folinic acid, leucovorin), a stable reduced folate derivative. It is probably critical to commence treatment before serious neurologic problems, such as developmental delay or visual and hearing loss, become established because they may not be readily reversible. In some cases, intravenous administration of high-dose 5-formyltetrahydrofolate (folinic acid; leucovorin) may be necessary to control seizures and stop neurologic regression (11).